Win Dunwell’s Garden Library and the Chaos of Memories 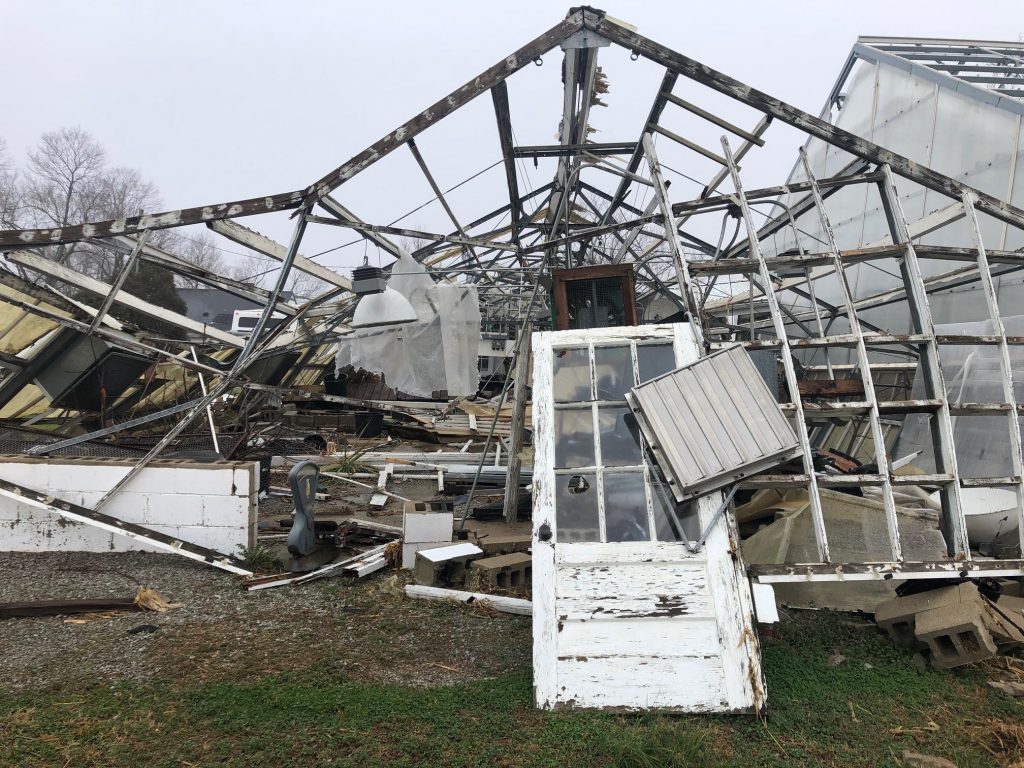 On December 11, Win Dunwell drove a half-hour to his workplace of 40 years. He knew the tornado that ripped apart Mayfield, Kentucky, had made a direct hit on his research station a mile outside of Princeton. Win pulled up, saw the ruins, and realized his library of somewhere close to 1200 gardening books, each one an office companion, had been swept away in the violent darkness the night before. Forty-nine of 58 buildings on the roughly 1,800-acre University of Kentucky farm were a complete loss. Friends and colleagues lost property but—mercifully—not their lives. Everyone was shaken. Win’s retirement party, scheduled four days later, was cancelled.

The German philosopher, essayist, and critic Walter Benjamin wrote an essay, Unpacking My Library, about the significance of his own books. “Every passion borders on the chaotic, but the collector’s passion borders on the chaos of memories. More than that: the chance, the fate, that suffuse the past before my eyes are conspicuously present in the accustomed confusion of these books.”

I first met the engaging Winston Campbell Dunwell long ago at an annual meeting of the “To Seek and To Share” International Plant Propagators. The native of tiny East Quogue, Long Island, New York, grew up outdoors among 320 permanent residents and five nurseries. High school jobs in horticulture were abundant. Trees, flowers, and books became fused at an early age. His passion never subsided. Win parlayed landscape summer work into a doctorate and a horticultural career that never permitted him a boring day.

He carried out trials in Princeton, Kentucky, on cultivated and native plants for landscape and nursery businesses as well as for the public. Witch hazels, hydrangeas, upright junipers, tall daylilies, and amsonias were in his final trial mix. Over his long career, he had also developed educational programs on propagation and production.The veteran horticulturist was scheduled to retire five days later. At least that was the plan.

Storm debris at the University of Kentucky Research and Education Center, a mile outside of Princeton, was pushed into huge piles. The cleanup and reconstruction will take months. Win was numb 18 days after the state’s most devastating tornado. The emotional recovery will take longer. Win talked solemnly for several hours. I listened. 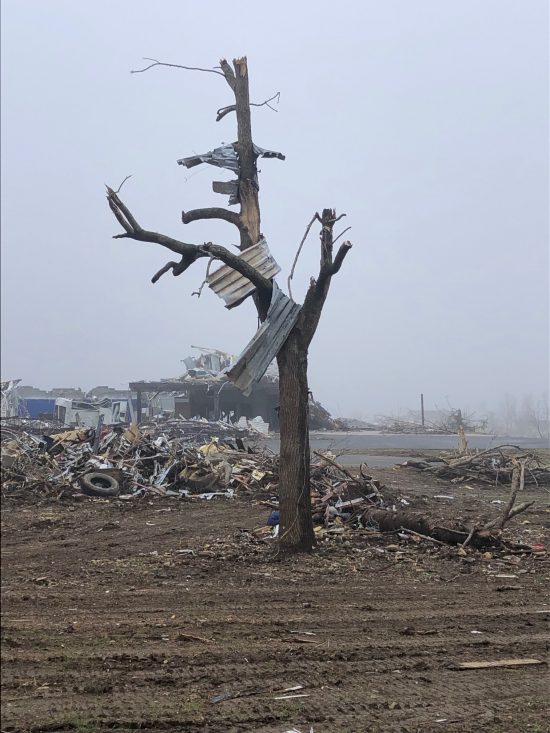 The one and only weeping black gum, Nyssa sylvatica ‘McNeil Weeper’.

Many of the large trees Win had begun planting in 1980 were lost. Some were toppled like duckpins; others were pulled from the ground and fiercely dragged a few yards. Loners were stripped and desecrated with tangled sheet metal. Gone are oaks, black gums, Kentucky coffee trees, hardy pecans, and so much more. The distinguished educator and horticultural researcher has been sifting through rubble and memories ever since. 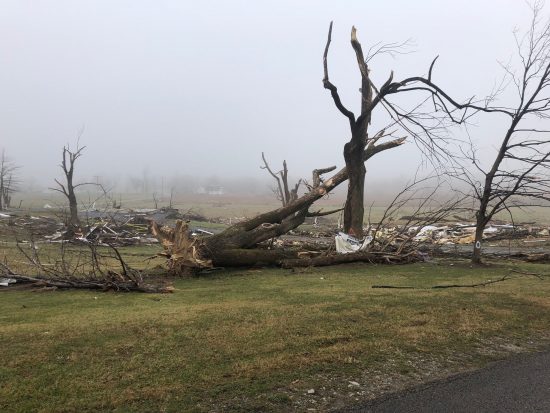 Win’s mood had begun brightening when I phoned on January 8th. While he sat in the home he shares with his wife Jan, a popular hair stylist, he looked out over Lake Barkley and said, “Wow. There goes a Kingfisher. I am happy to be alive.”

The newly anointed Professor Emeritus from the University of Kentucky posted on Facebook the same day: “I started ordering the books lost to the tornado, those on the shelf over my desk; the most frequently used. I recently purchased and received a used copy of Dick Bir’s Growing & Propagating Showy Native Woody Plants. It is stamped inside the front and back covers with the name and address of Annie R. Hafele…I was intrigued.  I searched for Annie Hafele online and found a thorough narrative of her life in her obituary.”

These are the last lines of the obituary: “Anne would like to share an original writing regarding her plantsmanship. If you’d have a mind at peace, a heart that cannot harden, then stroll a winding pathway through a quiet woodland garden.”

Win concluded: “Every book I have ever bought new or used has had a story even if only the place where it was bought, and I am so glad the stories continue.” Little did Win know. 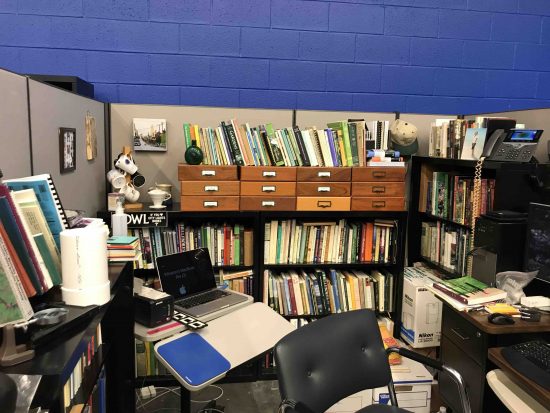 His friends in the gardening world had already begun to help him repack his library.

Fortunately, Stephanie Tittle, Horticulturist at Woodland Farm and Vice-President of the Kentucky Nursery and Landscape Association (KNLA), had visited Win in November, one month before the tornado.

Stephanie and Win toured the University of Kentucky Research Station plantings and, before she left, Win shared some of his favorite daylilies. He had promised to show her is garden library but forgot. Win sent a video of his office library the same day.

Stephanie met Win in the early 1990s when she was getting her professional garden feet wet. “He made me feel so comfortable and made me think what I said was worthwhile. He listened and started taking notes,” Stephanie said. “I finally felt like someone.”

When I asked her to describe Win in a single word, she said, without hesitation: “Gracious.”

Win’s office video came in handy. There was, at least, a record of his favorite and most-used garden books that she was able to decipher. Stephanie and Jacob Stidham hatched a plan. (Jacob is Greenhouse and Nursery Manager at Yew Dell Botanical Garden and President of the KNLA.) Jacob Stidham sent out an email on December 27th:

“The devastating tornadoes on December 10th and 11th destroyed the library of books that Win had been collecting since he began his horticulture career. The KNLA is now having a book drive to replace some of what he lost. We will present those to him as a token of our appreciation for his service to the KNLA, the industry, and the untold number of people he has helped along the way.

If you are able and willing to help replace some of these books simply purchase them here… Thank you!!! 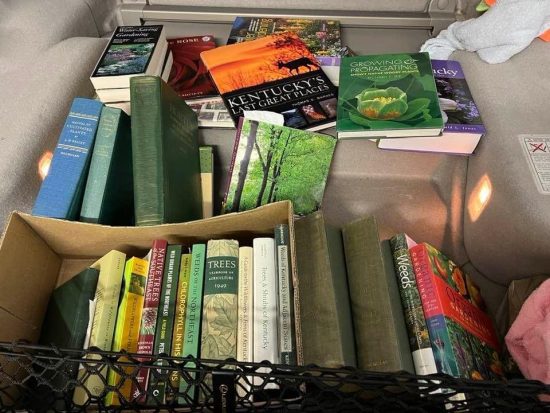 Win had unloaded the boxes from the trunk of Jan’s, car and was in a spare room that will now double as an office and space for the grandkids, when he came on Zoom. 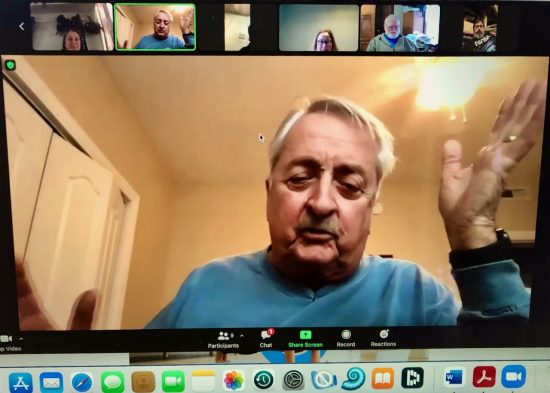 Win gives thanks at the “emergency” meeting of the KNLA on February 3rd.

I love my books. Losing them was a traumatic experience.”

“You don’t know how much this means to me.” 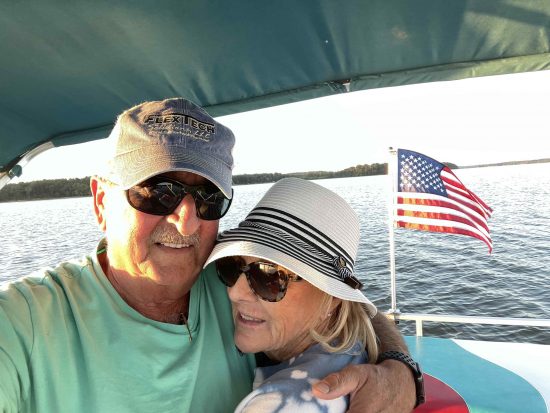 GO FUND Win Dunwell’s  colleagues at the University of Kentucky Research and Education Center at Princeton.