What Not to do in your Garden in February.

Still being nagged by those garden writers.

I wasn’t going to do this again. I thought that there can’t be many things we’d be told to do in February that are different from January. And anyway,  you’re going to be wandering around admiring the hellebores, no time for chores. 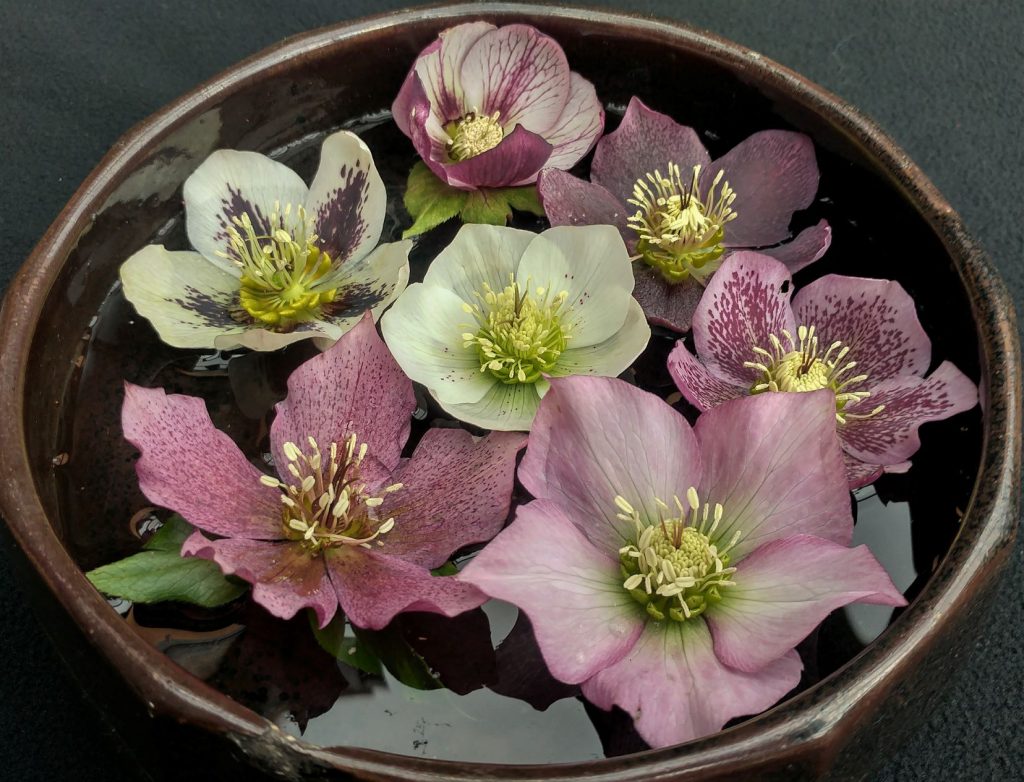 Some hellebores to enjoy

But that won’t satisfy the garden writers. They somehow manage to get in my face with their naggings. And so I feel I must help you.

I mean – when someone headlines ‘What to tidy and sort in your garden in February’ doesn’t it make you want to run away? Tidy???? Sort???

And people object when I describe gardening as outdoor housework.

What you are supposed to do.

This assumes a you have enough cash to have proper paths you can do this to. Our paths are mostly gravel, plus that which is locally called ‘dust’. This is the clay debris that comes with the gravel if it’s not cleaned at the quarry, and it has the virtue of setting quite hard, giving us a decent solid surface. (This is sometimes known as ‘hoggin’). But power washing it would blast it to bits. Might it get rid of the moss? Moss can make the paths slippery on the slopes. But it would get rid of everything else too. Do you blast your path? 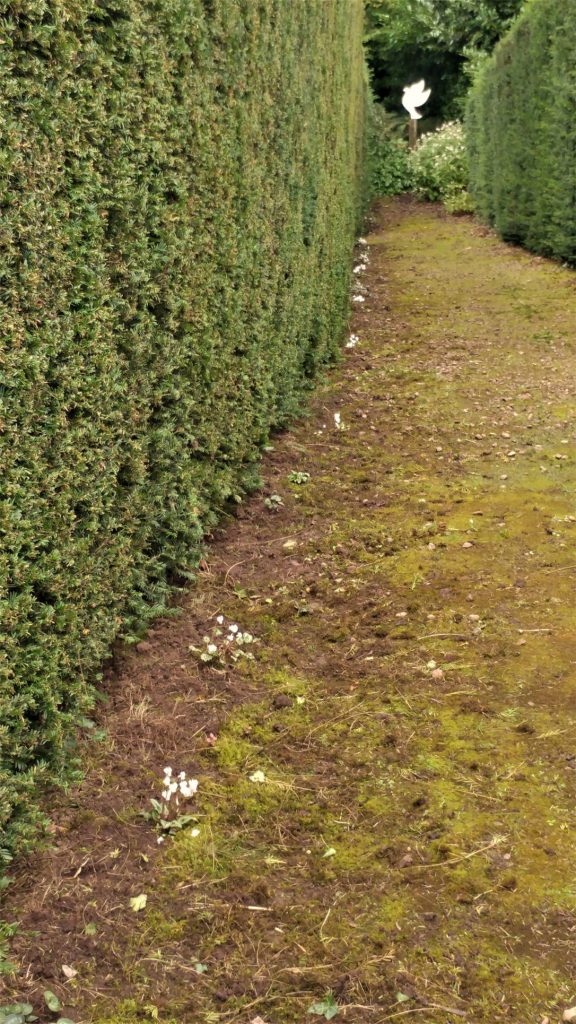 Well, if you absolutely insist a compost heap is necessary, you could still refrain from damaging your back by mucking it about like this. Actually I hope you have cut down all last year’s organic growth and left it where it belongs – which is wherever it was growing. In which case your compost heap will only have whatever organic rubbish you needed to get rid of last summer and it’ll be rather pathetic.

No lawn mowings in there, I hope – after all, they can handily get picked up and plonked on the nearest bit of empty soil. Or when summer has filled up every bit of bare soil, you can start dumping it on patches of weed. It hides them for a bit even if it doesn’t manage to smother them. And these days we are told not to mow, anyway! Huzzah! 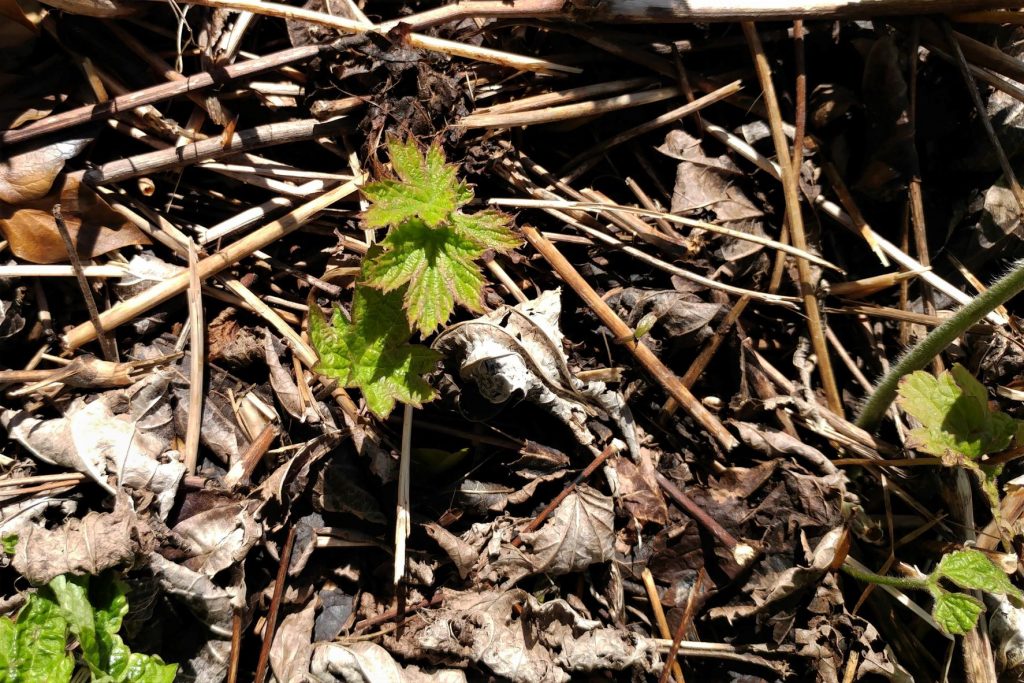 A happy plant emerging from its own debris.

Apparently, I was told recently, compost heaps only became a thing in the 1930’s, when the infernal combustion engine had created a shortage of horse manure. That was in the days when people wanted their plants to grow tall and lush, so they could faff about staking them. These days we like to grow our plants hard and tough, neglected and self sustaining – having given up this exercise in relation to children. But still, removing the organic matter is not the best way of looking after most plants or soils, even if you do eventually try to bring it back and sprinkle it around.

Maybe you need a manure substitute if you are growing vegetables?  Dunno. Some people like to grow monster marrows. But do you need to turn the compost heap? Well, everything rots down in time, even us. Just be a little more patient and leave it be.

This is my very favourite. You are supposed to spread the potatoes you’re going to plant out on to some vast platform in a single layer – in or on what, I can’t imagine. Then keep them in a cool, light place to sprout. It’s supposed to make them – yes – grow more quickly. That relentless urgency again.

Well, have you ever tried to stop potatoes from sprouting?? If you have a method, please let me know. If I turn my back on them for two minutes they are shoving their white tendrils out of the box and waving at me. 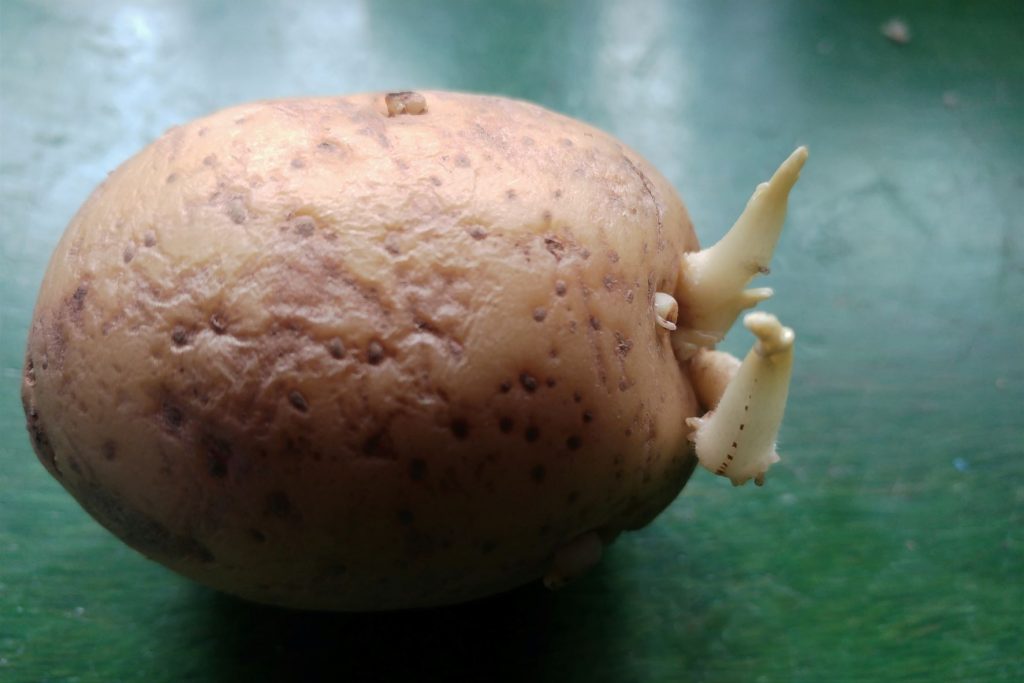 OK this is a rather elderly spud

When I grew potatoes, many years ago, I used to worry that the process of planting the things post chit would bash the carefully chitted sprouts off….

Consider planting a stretch of meadow. Pictorial Meadows mixes seed of natives with other colourful plants. (this is rather more advert than advice, don’t we think?)

This is a very dodgy one. Meadows in the UK are a form of permanent pasture, where grass is grown for hay and if you have a nice old one you may well have a multitude of other good things along with the grass. Ecologically invaluable, of great historic value and interest – this is possibly our UK version of prairie.

But then none of us have a square inch left unplanted, so we are not about to start messing around like that. Hopefully. 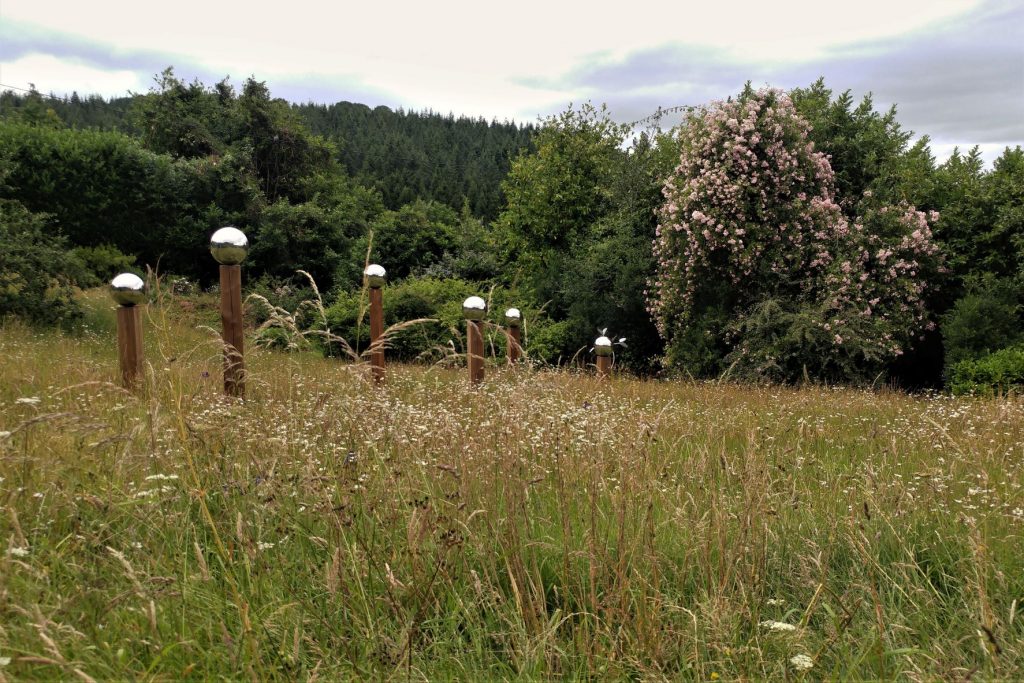 Meadow – unploughed (or dug) for over 200 years. Not quite like a field full of annuals.

Well that’s an interesting one. It’s to let the flowers through, which presumably they were never designed to do without human help. They are weeny little things, not terribly worth bothering with perhaps. For years I haven’t bothered. I like the leaves best and they seem to just sort of keep growing and looking good. And in amongst them some rather weeny flowers pop up. 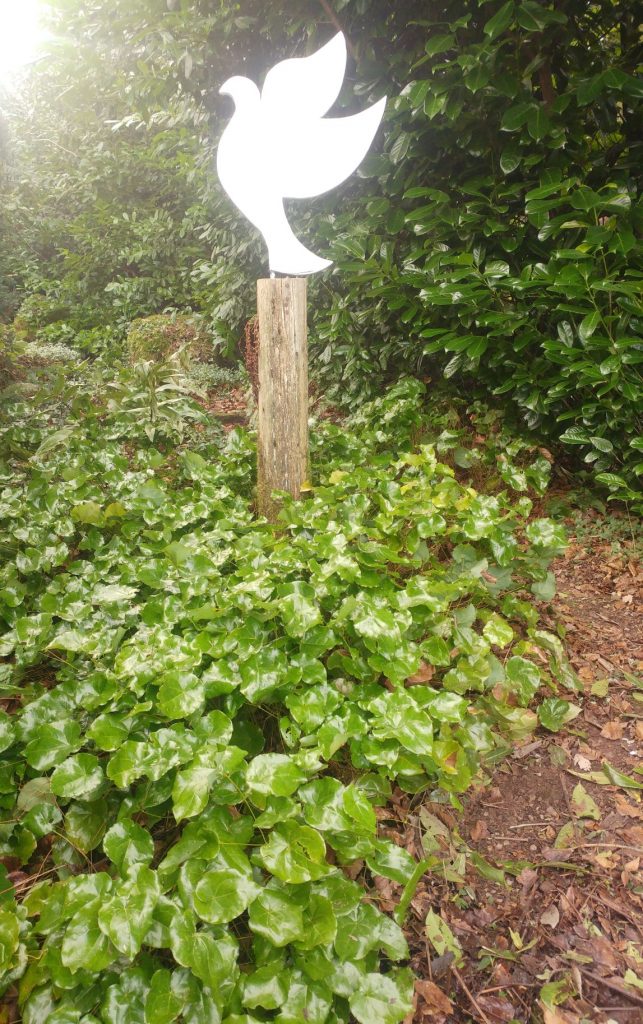 You’d chop off this lot so you could see some weeny flowers??

Well, who knows what you are all actually doing? Digging your way out to the shops through the snow? Enjoying the summer sunshine in Australia? Still trying desperately to keep warm by the fire? Looking at a desert or a maybe a sandy beach?

Wherever you are, you must be getting some bonkers instructions about what to do in your garden? What are they nagging you about??