In the UK, right now, the horticultural world is about to drive us all mad with snowdrops. Pictures of. Articles about. Gardens with them. Anything people can think of to bash us over the head with snowdrops.

So I thought this year I would join in and help drive everyone barmy. Although I am notorious for screaming ‘no more snowdrops!!!’ on social media. Because snowdrops will be being flogged everywhere. 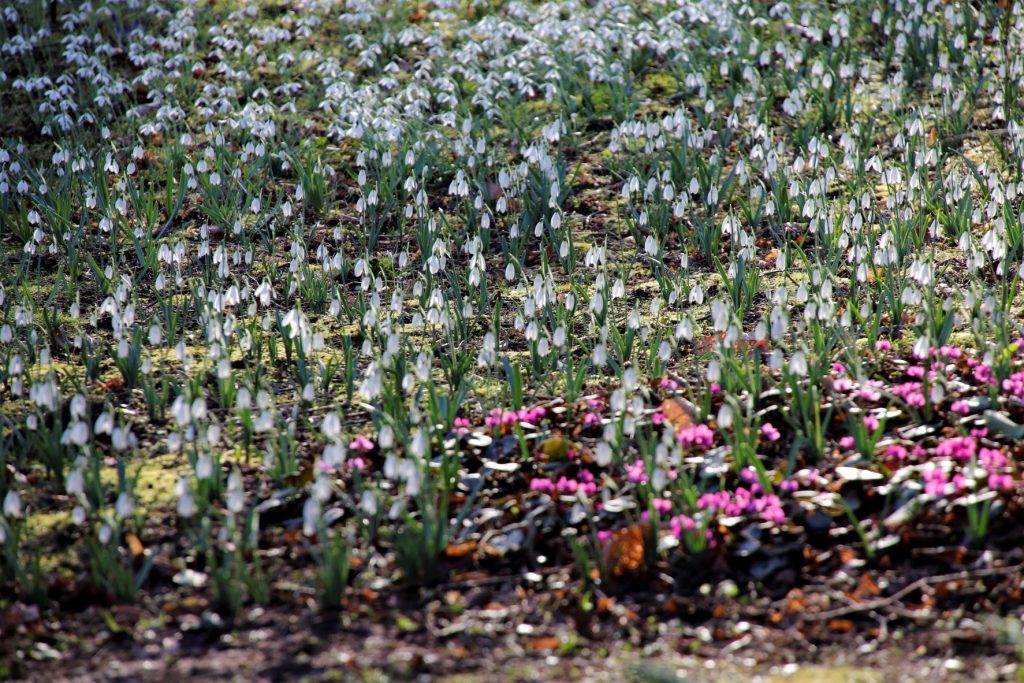 Snowdrops are pouring down!!!!!

I guess it’s about desperation, because there is comparatively little to go on about at this time of year here. You will soon get articles about hellebores, though never quite as many as about snowdrops. Never mind the endless pictures of them. The Next Best Big Bore then is Chelsea, which we’ll forget about right now. We deserve some respite.

And, there are, in this country, people known as galanthophiles:  “enthusiastic collectors and identifiers of snowdrop (Galanthus) species and cultivars.” They crawl about in the worst of weathers gawping at flowers which rarely manage to exceed about two or three inches in height. Getting very over excited and prepared to pay hundreds of pounds for a squidgy little bulb. 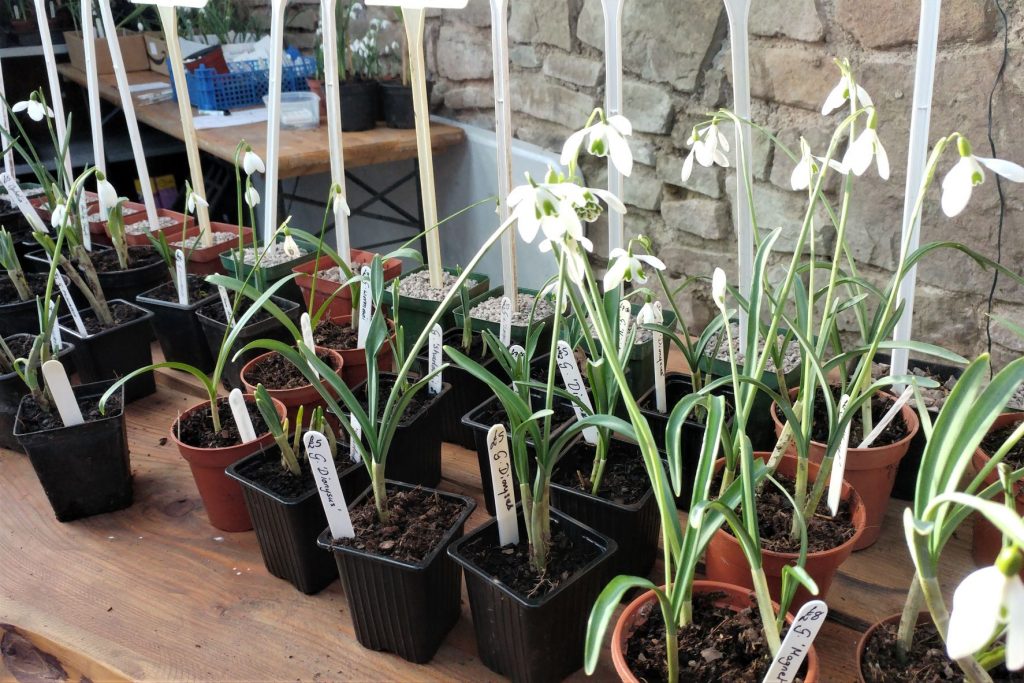 It’s not as though snowdrops are an ideal obsession, being so low down. Yep, there are miserable photographers crawling about on frosted ground, trying to get an angle on a flower three inches high.  Sometimes snowdrops go mad, spreading themselves everywhere, making it really hard to get that pic without squishing a lot of them and presumably getting shot for your pains. 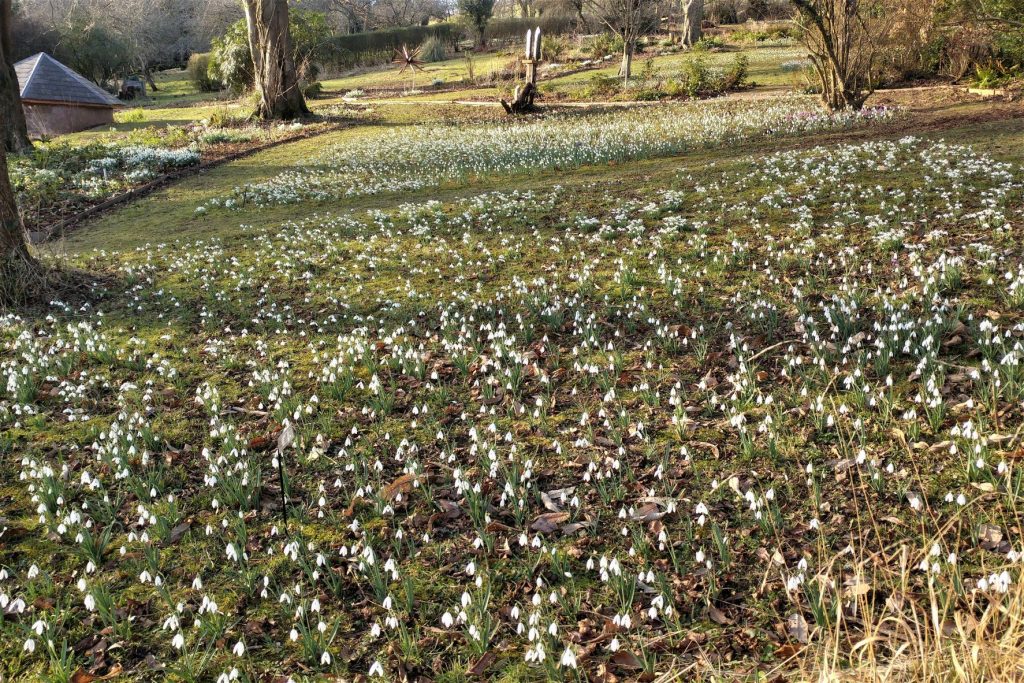 Yes. It’s a wow. But I sometimes wonder – would we be so wowed if they were bits of polystyrene packaging, which could look quite similar….

And, you know, sacrilege to say so, but they’re not terribly different from one another. If people are going to go bonkers writing about roses or dahlias they have lots of differences to make for some relief – a variety of colours, singles and doubles, little and very big, and so on. But truly a snowdrop really looks like a – snowdrop. Especially for those of us who don’t relish getting down and up much. 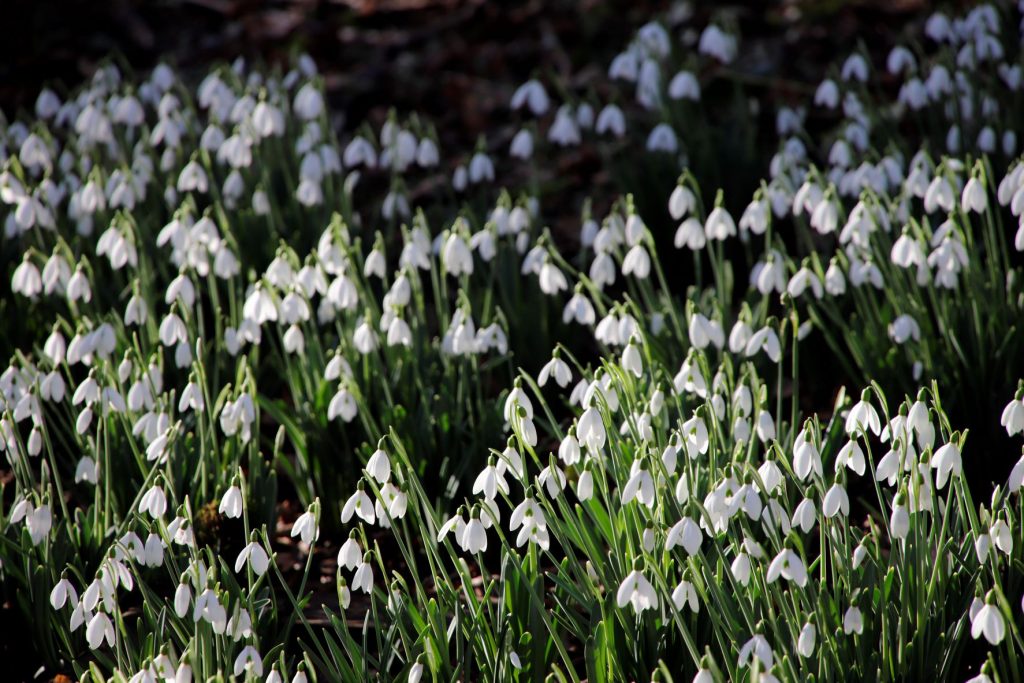 Well, we made a visit once to the great gardener, John Sales, who has two things that make some people envy him.

One I can cope with, obviously, – lots of snowdrops in many different varieties. The other is harder – he has a prehistoric ditch. I get acute history envy even remembering it. Imagine! Phew. His  friends get a mega buzz from the antiquity and some (labelled) snowdrops at the right height. 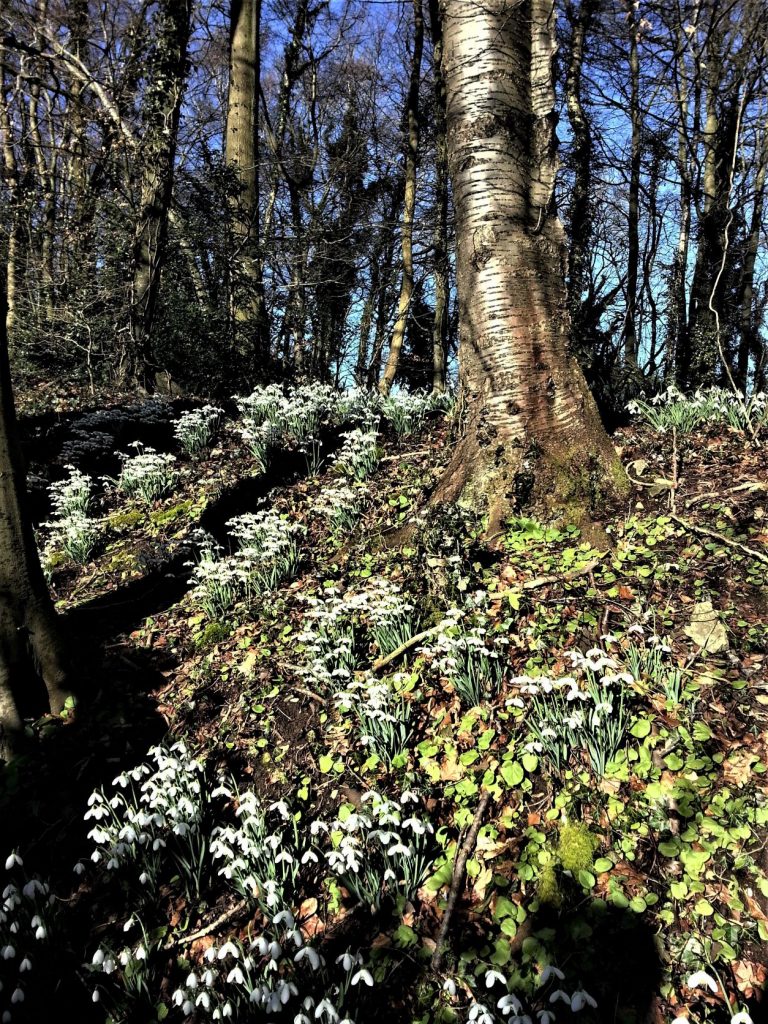 Snowdrops on a prehistoric bank!

And today we went to see the amazing display of snowdrops at the Wye Valley Sculpture Garden. Yep, really. Millions of snowdrops. Us along with most of Monmouthshire. The snowdrop spread is simply staggering. Even to a snowdrop skeptic like me. Over 70 varieties (!) and most are labelled. And although a lot of seeding clearly goes on, you can also see, if you look carefully, that someone (Elsa Wood…and maybe others) have carefully divided overcrowded clumps and replanted all the separate bulbs: 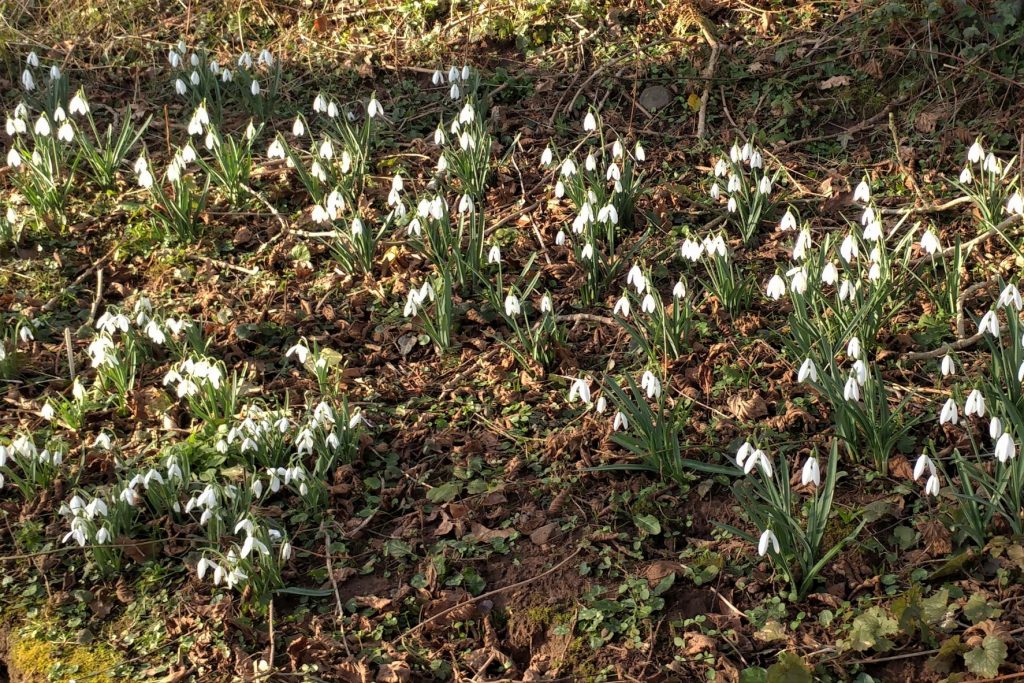 Well, some of them do look a bit different, even from above: 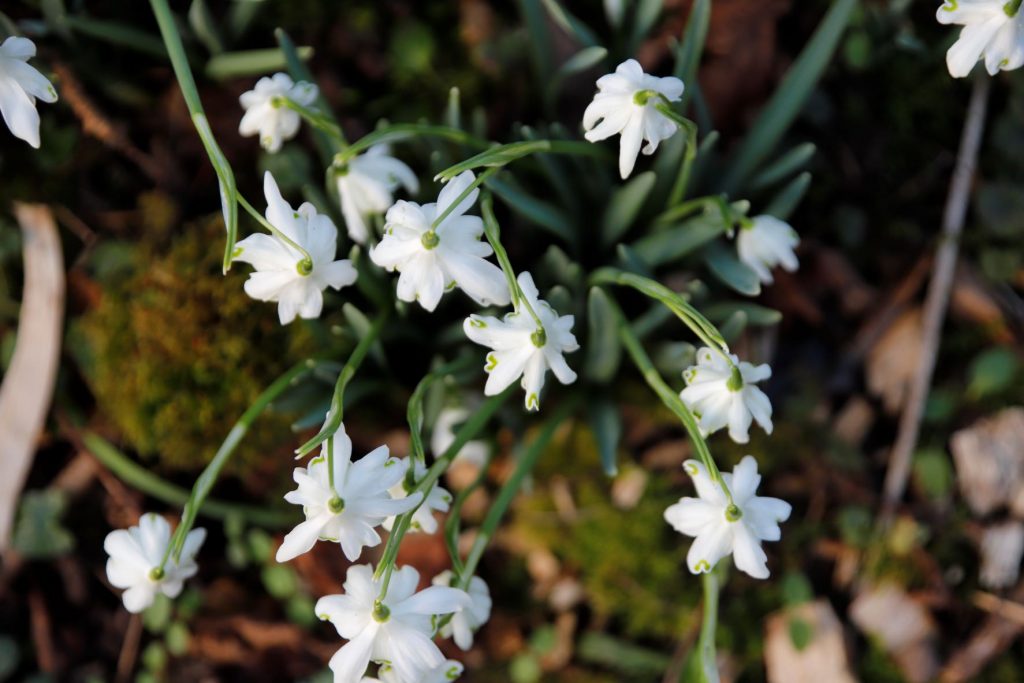 These look like this, if you turn them up: 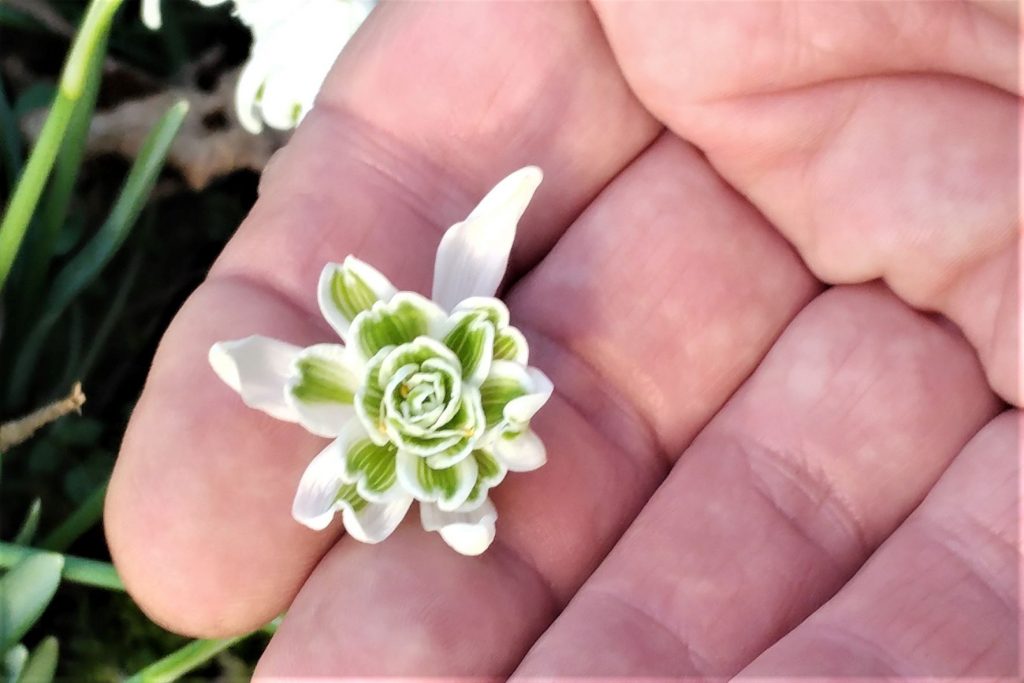 And Charles, of course, had a great time. 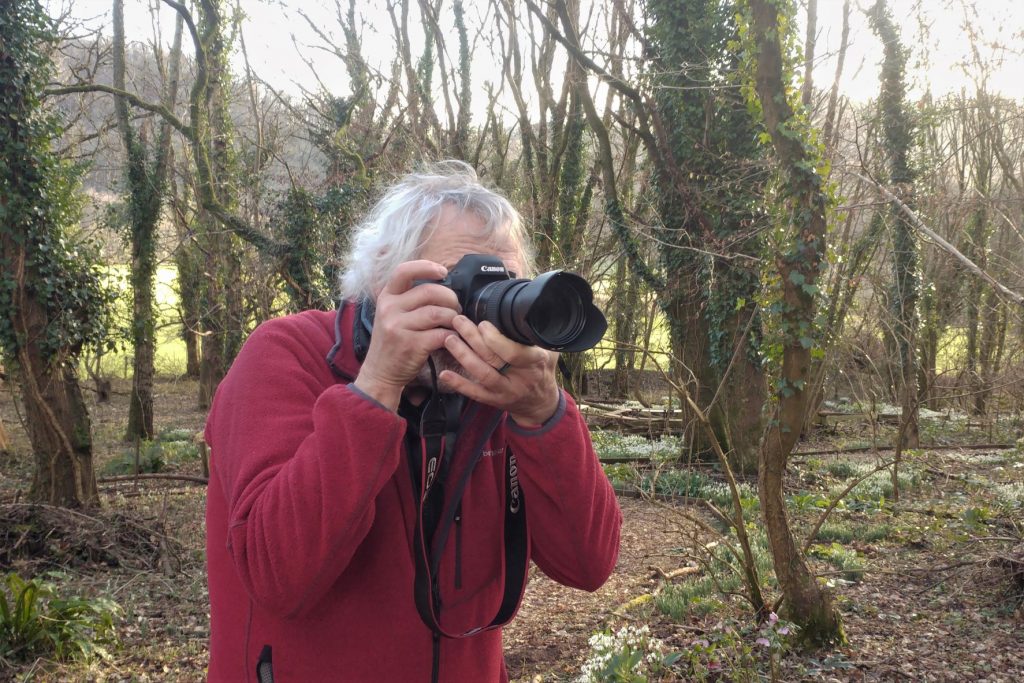 Though he didn’t kneel down, of course..

And here is the sculptor and instigator of this welcome to the garden: 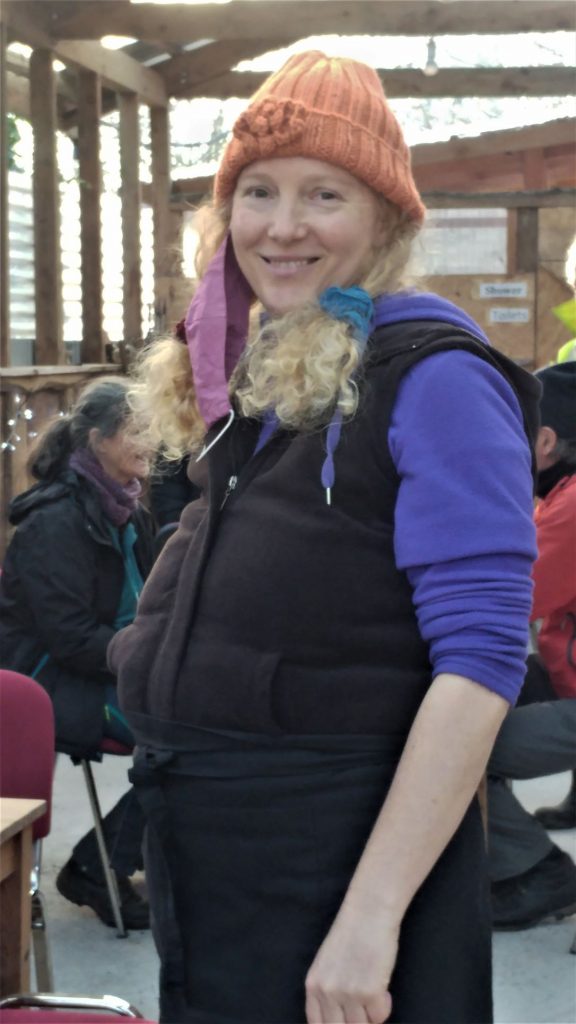 Who well deserves applause for a great afternoon out for us and the rest of the county. She was serving tea and cake today to happy visitors (people kept smiling when we met!) 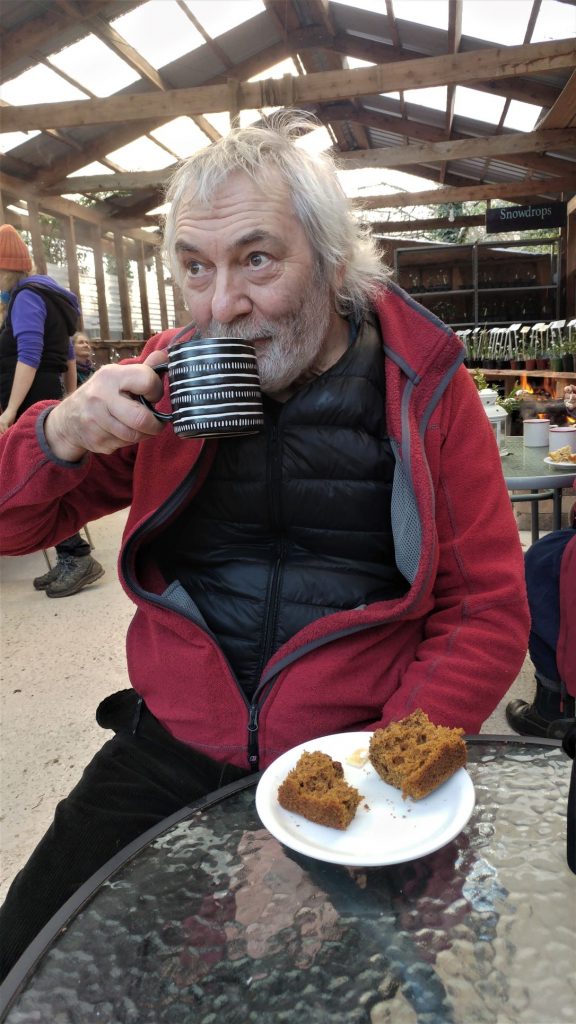 Am I going to soften up on snowdrops??