Did you hear about the GREAT news from California? The legislature passed and the governor signed a law banning gas-powered leaf-blowers and lawn-mowers! (Also chain saws, weed-trimmers and golf carts.) The ban takes effect as early as 2024, when all newly sold small-motor equipment primarily used for landscaping have to be zero-emission – either battery-operated or plugged-in.  The law applies only to any engines of less than 25 gross horsepower, so it doesn’t apply to on-road motor vehicles, off-road motorcycles, all-terrain vehicles, boats, snowmobiles or model airplanes, cars or boats.

Yes, it’s a burden for the landscape-care industry, so the state set aside $30 million to help professional landscapers make the transition. Industry representatives say that’s not adequate for the estimated 50,000 small businesses that will be affected by the law. 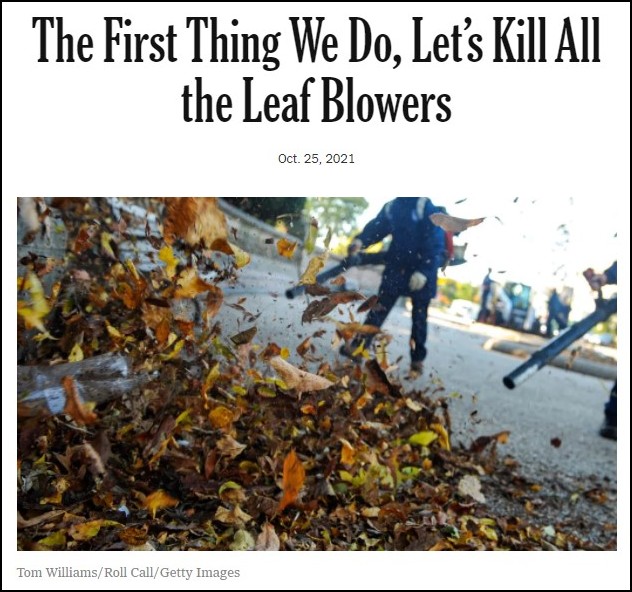 Nashville-based Margaret Renkl included the California news in her column  “First Thing We Do, Let’s Kill All the Leaf Blowers,” describing the noise in fall as a “deafening, surging swarm, blasting from lawn to lawn and filling the air with the stench of gasoline and death. I would call them mechanical locusts…”

Some produce more than 100 decibels of low-frequency, wall-penetrating sound — or as much noise as a plane taking off — at levels that can cause tinnitus and hearing loss with long exposure.”

And the DC-based writer James Fallows:

James Fallows summarized the emissions problem this way: “Using a two-stroke engine is like heating your house with an open pit fire in the living room — and chopping down your trees to keep it going, and trying to whoosh away the fetid black smoke before your children are poisoned by it.”

I’m SO on board with these sentiments! I too hate the noise but also the crap they blow into my eyes whenever one is operating nearby.

Only the Environmental Protection Agency can set emission standards. But California, owing to its unique climate and geography, which allow airborne pollutants to coalesce and linger, is the exception to this federal limitation. Other states can opt to follow California’s more stringent tailpipe emissions standards, as 12 states and the District of Columbia do.

More than 100 cities across the country have already passed regulations to ban or restrict gas-powered leaf blowers. For people committed to their manicured lawns, the good news is that powerful electric and battery-operated leaf blowers now exist, and they are quieter and greener and healthier than gasoline-powered blowers. Their market share is also growing rapidly; electric equipment now represents roughly 44 percent of lawn-care machinery sales.

Kill your Lawn, Too!

But then Renkl goes after lawns – all of them:

Nearly everything about how Americans “care” for their lawns is deadly. Pesticides prevent wildflower seeds from germinating and poison the insects that feed songbirds and other wildlife. Lawn mower blades, set too low, chop into bits the snakes and turtles and baby rabbits that can’t get away in time. Mulch, piled too deep, smothers ground-nesting bees, and often the very plants that mulch is supposed to protect, as well.

Then, while endorsing another popular meme – Leave the Leaves! – she slings this zinger at turfgrass:

[Leave the leaves] if your lawn consists of entirely of unvariegated turf grass (which it should not, given that turf grass requires immense amounts of water and poison to maintain). 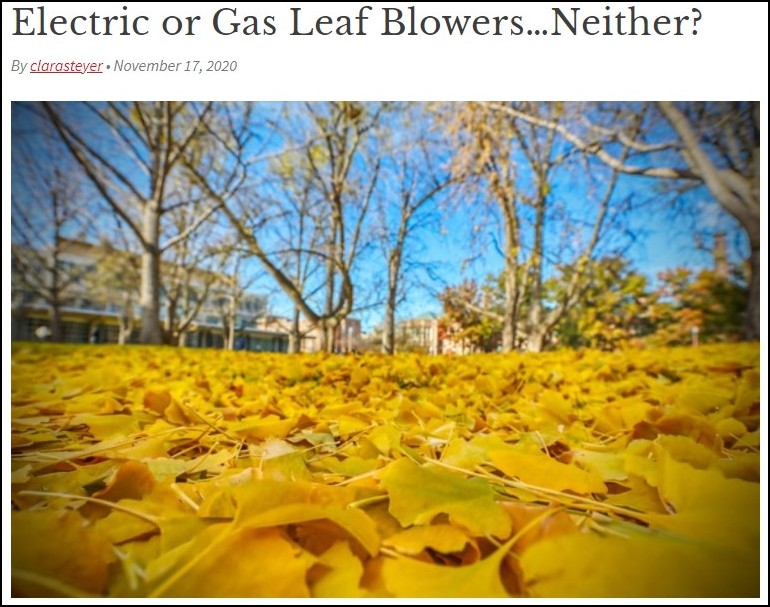 Like SO many Americans with lawns, when I had one I dumped neither poison NOR water on it. Eco-gardeners these days promote “good-enough lawns” that are care-free and require NO inputs, much less poisons and scarce water resources. (Okay, maybe some overseeding, watering in the new seeds, and aerating every few years if the soil is compacted.)

And from my observation, most regular homeowners take the lowest-maintenance approach possible, especially when it comes to buying the “poisons” and having to apply them. That’s no fun. I imagine.  Never done it!

Oh, and Renkl’s term “unvariegated turf grass” is something she must have invented. At least hers is the only use of the term to be found online. If she meant perfect, uniform lawns, we’d know that’s what that means – not the typical good-enough one.

But speaking of attack high-maintenance, golf-course-quality lawn care that’s done by the wealthiest minority of homeowners, let’s keep on ranting about it, maybe changing more laws.

But lumping all lawn-owners in one batch of poisoners can turn off some who might just improve their lawn-care practices with good information – and no shaming.

Back to Renkl’s column. When I see sweeping generalizations I naturally click on the author’s source (if there IS one), and in this case I assumed that Renkl was misinterpreting or exaggerating some study or other. The article she linked to is “Electric or Gas Leaf Blowers…Neither?” from Washington University in St. Louis. Call me a stickler but that article says NOTHING about water and poisons being required to maintain turfgass.

I guess the NYT doesn’t have factcheckers. In this case I’m not surprised – I’ve seen other exaggerations in Renkl’s columns.

That’s so unlike the Times’s actual garden writer, the reliably trustworthy Margaret Roach. She does the research, and keeps doing it.

Washington University and “Leave the Leaves”

But I was sorry to see that the Wash. U. article go farther, using the Xerces Society as a source:

Leaves are free mulch, protecting perennial plants, especially those that sprout early. Consider piling leaves on empty vegetable beds or perennial beds, or around the bases of trees to protect from cold and keep in moisture

Oh, dear! I complained about statements like that in my 2015 post “The NWF’s Terrible, No-Good Gardening Advice Goes Viral.” In it, I challenged the idea that turfgrass and ALL perennials are just fine under a bed of leaves all winter. Not all plants are the same!

Interestingly (or sadly), the National Wildlife Federation’s original article (just ignore the title) actually advises leaf-leaving IN WOODLANDS, not gardens! But others have taken up the meme and run with it for gardens, period.

Is it possible to say “Most plants are fine under a bed of leaves all winter – but check!” For checking I’d suggest reading about them – do they like to dry out between rains? Or uncovering some of your sun-loving plants from places where leaves don’t fall (Mediterranean climates with few deciduous trees), like lamb’s ears or groundcover Sedums, to see if they’re doing okay.

But I know that’s way too complicated for memes. And meme’s gotta meme!