When Gardening to Save The Planet, The Argument Isn’t Aesthetics vs. Ecosystems

William Cocke joins us this week to discuss Doug Tallamy’s 2019 book Nature’s Best Hope, oft quoted (and misquoted!) on the web and in Master Gardener circles nationwide. Cocke is a fan – but brings up some interesting points to consider, and highlights some compelling research that suggests the process of native fauna evolving with non-native plants is already underway. – MW

In 2008, Douglas W. Tallamy, an unassuming professor of entomology and wildlife ecology at the University of Delaware, shook up the gardening community with a surprise hit, Bringing Nature Home: How You Can Sustain Wildlife with Native Plants. In it, he made the case that the relationship between native plants and the insects that have evolved with them is the essential link in maintaining healthy ecosystems. Incorporating native plants into basic garden design is not only desirable, but also imperative, to reverse declining populations of insects and restore balance to an otherwise broken system. 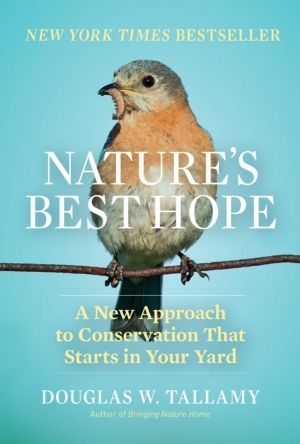 More recently, in his 2019 book “Nature’s Best Hope: A New Approach to Conservation That Starts in Your Yard,” Tallamy builds upon this idea, but he takes on a more activist tone. He wants to change the way we interact with and perceive the landscape around our homes. It’s no longer enough to select a plant that is pleasing to the human eye, every choice we make must also support a complex web of life. He’s now on a mission to save the world—one garden at a time.

Tallamy is an unlikely revolutionary. In person, his genial science guy demeanor has made him a favorite on the garden club speaking circuit. His writing style leans toward the professorial—a gently persuasive Socratic method punctuated by the occasional exclamatory statement. It’s as if he can barely suppress his enthusiasm. As the book’s title suggests, Tallamy maintains a generally sunny outlook, which is a welcome corrective to the book’s dark underlying theme: the natural world is in big trouble, with many ecosystems in steep, possibly irreversible, decline. In the Anthropocene, humans are not part of the problem, they are the problem. Fortunately, in Tallamy’s view, they can also be a part of the solution.

In “Nature’s Best Hope,” he aims to inspire a nationwide, grass roots movement he calls “Homegrown National Park.” By awakening those of us who are disconnected from the natural world and changing the ingrained habits and practices of those who are already gardeners, Tallamy believes that, collectively, we can create a homeowner-driven patchwork of personal parks that could blanket the country. In doing so, each of us can play a role in mitigating the effects of habitat loss, fragmentation, and even climate change. If every landowner pledged to convert just half of his or her lawn into a functioning native plant community, Homegrown National Park could cover 20 million acres, weaving the fabric of a vast park system into every ecosystem in the continent. 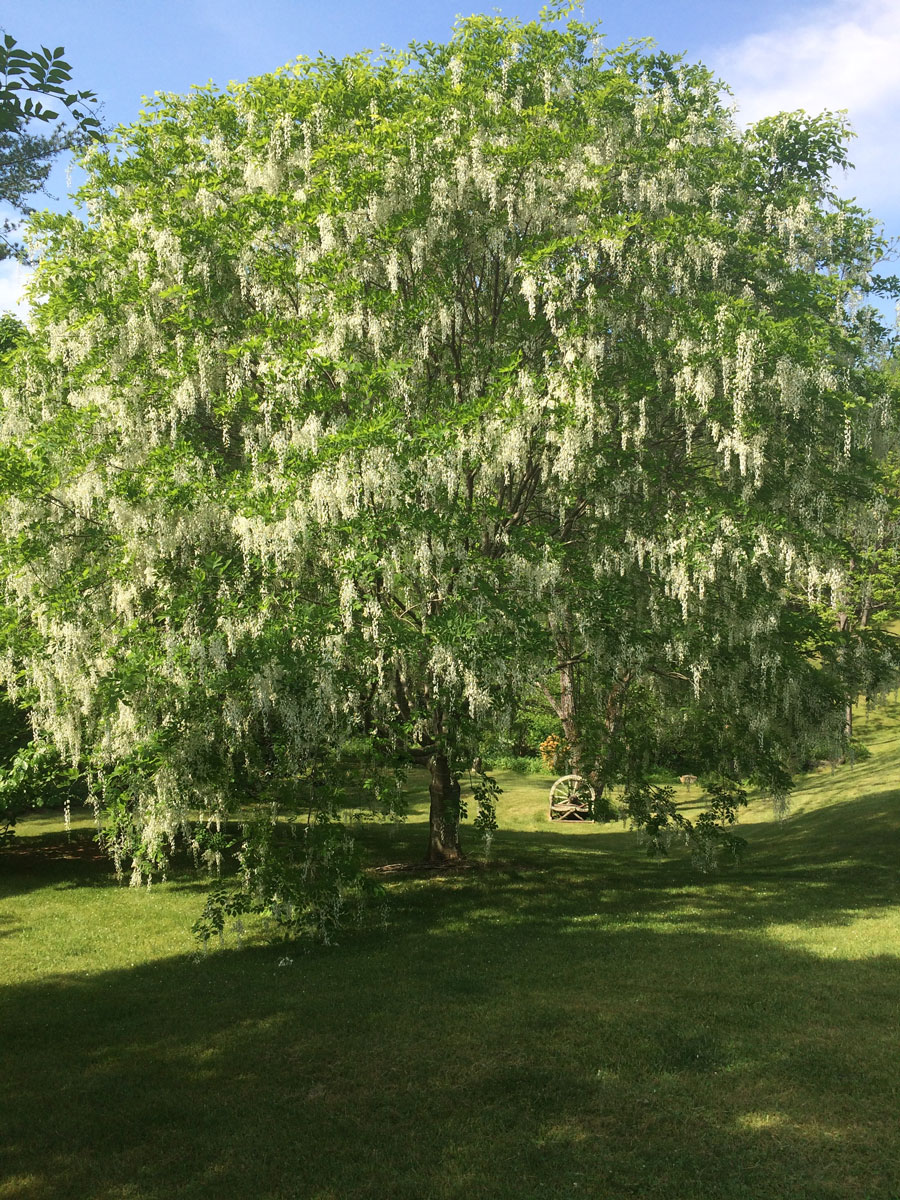 When a yellowwood blooms — usually every two to three years — it puts on a profuse, pollinator-pleasing display of fragrant, white, wisteria-like flowers.

It’s a beguiling concept. But there is a lot of information to digest. The book devotes entire chapters to wildlife ecology concepts such as carrying capacity, ecosystem function, keystone genera, and interaction diversity. Fortunately, Tallamy is adept at explaining complex scientific concepts in lay terms. And as an entomologist by training, he devotes one of the lengthiest chapters in the book to how gardeners can become stewards of what E. O Wilson calls “the little things that run the world”—insects. In doing so, he makes a compelling argument for what might be described as insect-driven garden design.

A recent study of native bee populations conducted at Delaware’s Mt. Cuba Center, a public garden and conservation center dedicated to native plants, appears to support Tallamy’s argument for a garden-centric approach to conservation. In conducting a survey of native bee populations on the 1,000-acre property, in both the natural areas and the cultivated gardens, its researchers found that bee diversity was highest in the gardens. So human-designed spaces acted as vital links to the larger landscape—providing oases of diversity that sustain the wild areas surrounding them. 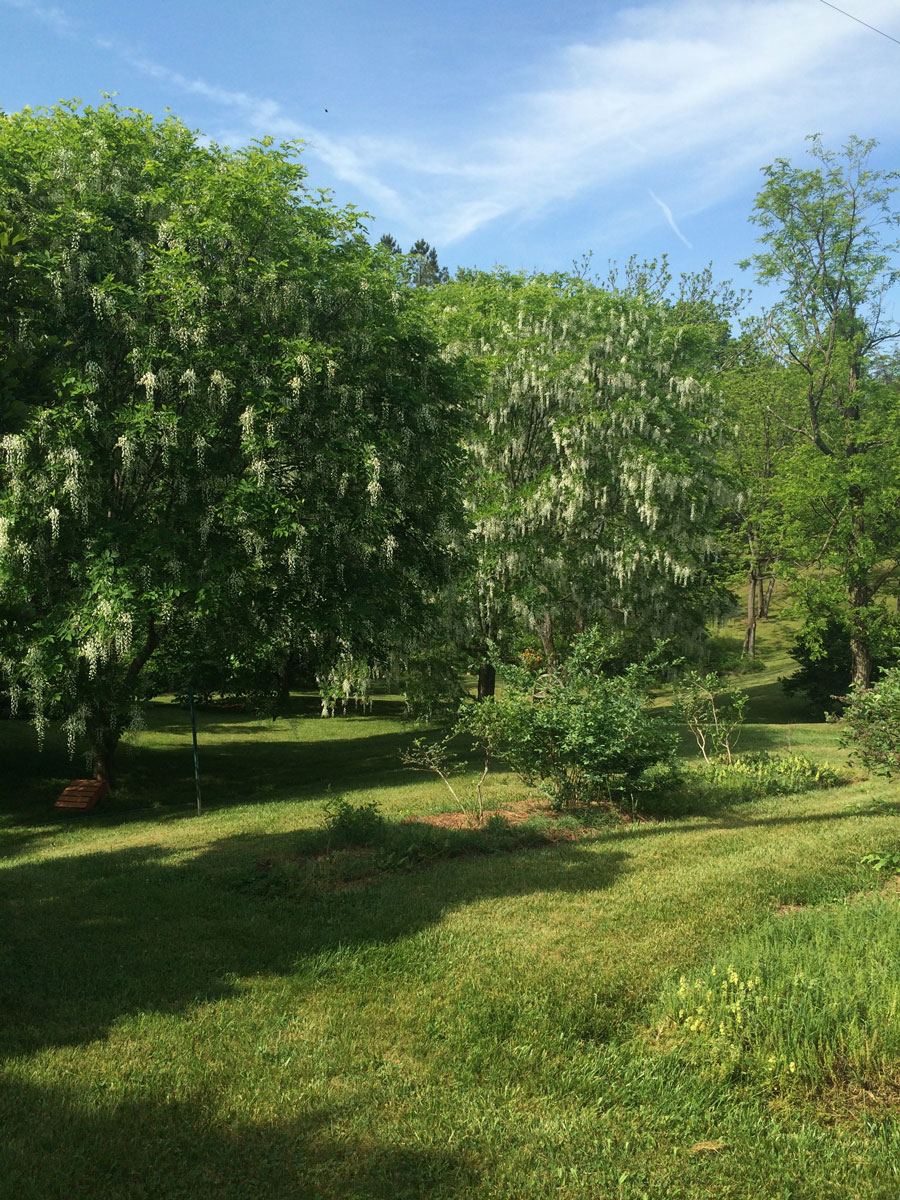 A yellowwood planted as a specimen tree can provide both shade and beauty to the landscape.

Gardening for insects sounds a bit creepy. What about gardening for our own benefit, for the sake of a beautiful outdoor space we can call our own? Tallamy wants to upend our whole notion of what’s considered beautiful to include a vision that transcends what looks good to humans and encompasses what sustains the other creatures we share the world with.

Yet, as a scientist, Tallamy can’t help creating hierarchies—much of his and his students’ research involves ranking various native plants and the insect species they support—and I quibble a bit over his preference for certain native plant species over others. While I certainly can’t argue with the praise he lavishes for the oak tree (the subject of his latest book) and his point that including just one species of oak in the garden can support hundreds of beneficial insects, he risks giving short shrift to other native trees, such as the yellowwood, because they support fewer insects. We have two mature yellowwoods in our yard and they are unparalleled shade trees, bedecked with stunning displays of fragrant white flowers, aswarm with pollinators, on the years they choose to bloom. He also neglects to mention the several species of mountain mint that, in my observation, are late summer magnets for a diverse set of native bees and wasps. 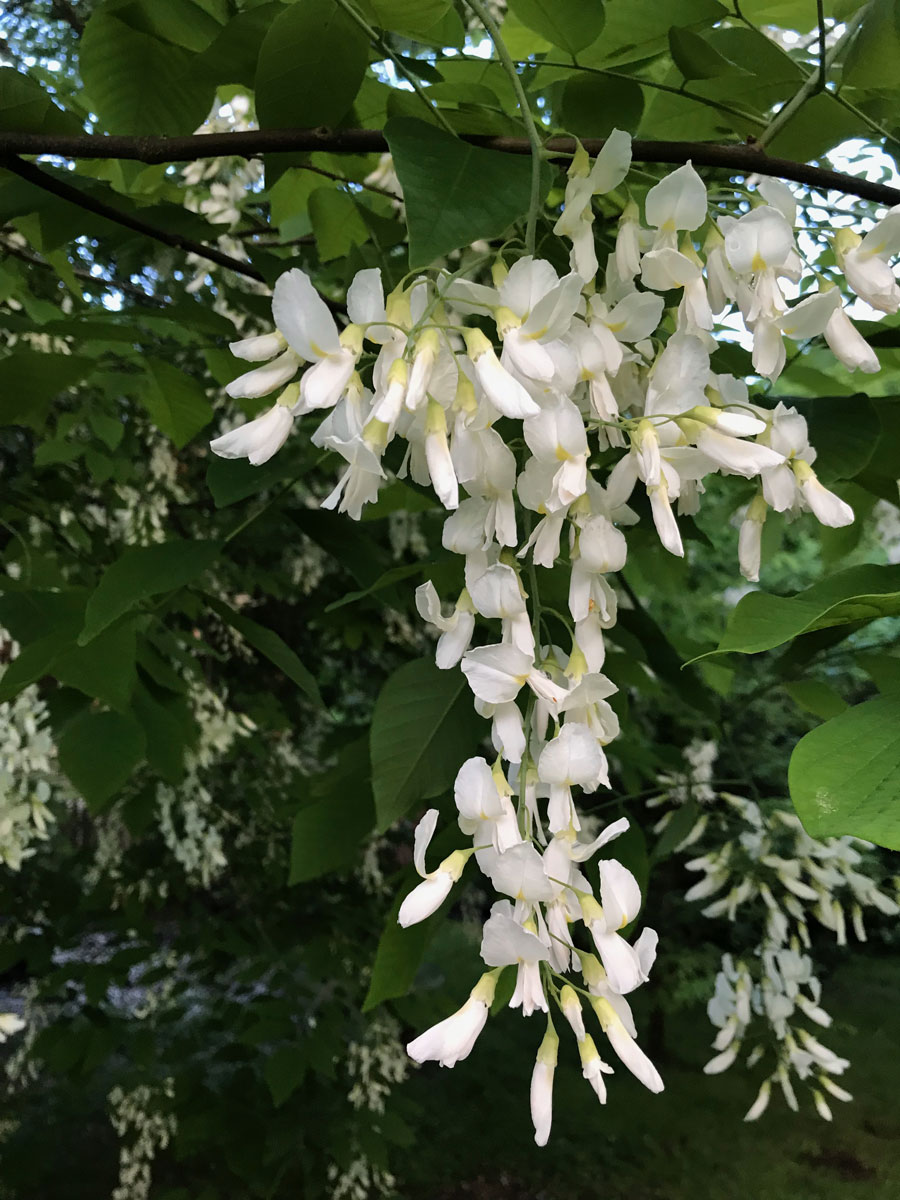 Close up of a yellowwood panicle in full spring bloom.

Paradigm shifts rarely happen without controversy. Tallamy has taken some heat for his insistence on the superiority of gardening with native plants and, particularly, his insistence that we make a point of eradicating invasive plants in the landscape. A mostly laudatory April 2020 article in Smithsonian magazine devoted space for a rebuttal to Tallamy’s research from Arthur Shapiro, a professor of entomology at UC Davis. In the Smithsonian story and a later follow-up, Shapiro noted that non-native eucalyptus trees in California support overwintering monarch butterflies and that other introduced plant species support insects, that in some cases, have found them to be acceptable and even superior food sources. He also presents evidence that some insect species can exhibit evolutionary adaptations to non-native plants in hundreds of generations, rather that the thousands posited by Tallamy. In other words, some insects, even so-called specialists, may adapt to feeding on plants that they haven’t co-evolved with in something approaching a human lifetime.

This latter point is especially important when considering climate change, another ecological crisis—and perhaps the most pressing one—that Shapiro and his supporters believe Tallamy largely ignores. If native plants cannot compete in a changing climate and are displaced by more aggressive or better adapted invasives, then the wildlife associated with them either adapts or dies, Shapiro  argues. Invasives are the consequence of climate change, not the cause of associated plant or animal extinctions.

That argument, though, seems to me to reinforce Tallamy’s plea for a new conservation approach to gardening, one that gives native species a fighting chance to survive climate change. Leaving large-scale native plant restorations aside, Tallamy’s one-garden-at-a-time approach to maintaining the habitats we’ve constructed, either on purpose or unintentionally, as productive for wildlife as possible, is eminently doable. Controlling invasives on a backyard basis can be achieved with a little sweat equity. Not planting them at all is even better. Placing a non-native azalea in the yard or allowing a monoculture of autumn olive to overtake your landscape may support a few insect species at certain times of the year, but it’s a bit like asking a starving person to go on a diet in the middle of a famine. A healthy, balanced landscape is better able to sustain a greater variety of species in what is certain to be many challenging decades to come. 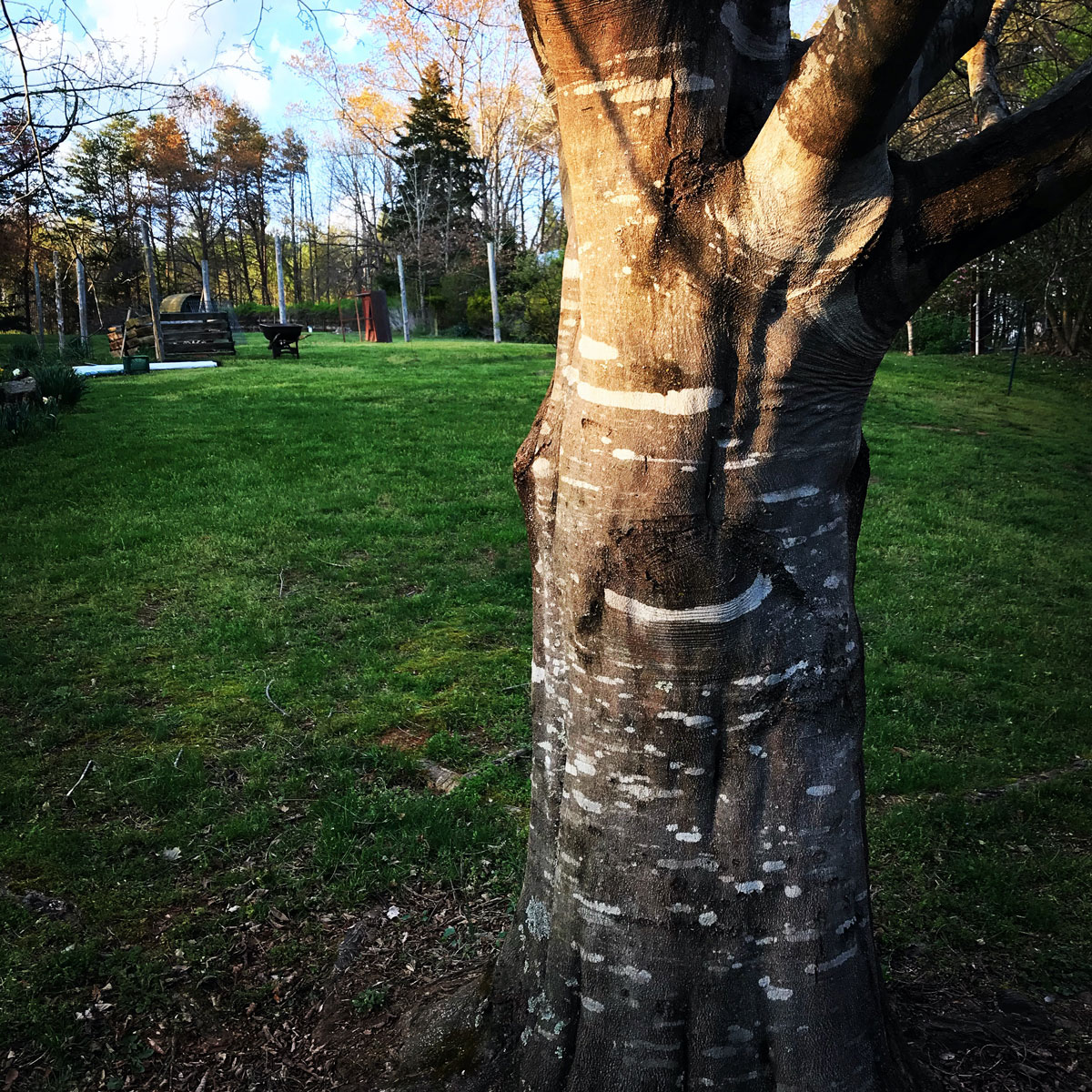 The smooth, mottled-gray bark of yellowwood (Cladrastis kentukea) has good winter and late-spring interest. This photo was taken on April 7, 2020, the day John Prine died.

Cultivate Your Own Aha Moment

In an extensive Q&A section, Tallamy attempts to address questions and criticisms to his approach. After reading his book, my preferred habitat is somewhere out in the squishy middle ground. Trying to return the landscape to a misty prelapsarian paradise is an undertaking that would make Sisyphus despair. So it’s okay to incorporate some non-native, noninvasive plants into your garden design. My personal preference is to incorporate about 80% natives into the garden with the rest of the space reserved for exotics (Tallamy suggests a 70/30 mix). Planting early blooming bulbs, for example, is a relatively benign way to bring in a welcome burst of color to the spring landscape. I love the structure, height, and heady purple of Tatarian asters in the late fall, so I’ve mixed them in with native asters and goldenrods, the superstars of the late season garden.

In Nature’s Best Hope” one of Tallamy’s aha moments comes when he observes three monarch butterflies flitting from milkweed to milkweed along the narrow strip of native plants on New York City’s High Line. If these highly specialized insects could find their host plants in the middle of one of the world’s most urban settings, then why not work with nature’s resilience to create a matrix of life that begins with humble backyard? The Homegrown National Park could incorporate window boxes overlooking Central Park, a postage stamp prairie in a Milwaukee yard, or a desert garden in the exurbs of Los Angeles. It’s a vision—and a challenge—that Tallamy presents the home gardener, and one well worth considering.

Little things add up to big things, but in the end it’s the little things that may save the world.

William Cocke is a longtime gardener and native plant enthusiast with an interest in the relationship between gardening and the natural world. For more than a decade, he wrote a monthly natural history column, “Blue Yonder,” for Blue Ridge Outdoors. He also provided editorial assistance for the regional guide, Piedmont Native Plants: A Guide for Landscapes and Gardens.  He continues to explore methods of gardening that are aesthetically pleasing yet responsive to our roles as stewards of the natural world. 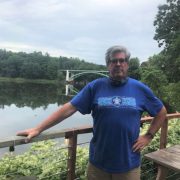