Sorrow and Solace in Sichuan on 9/11

On 9/11 I was searching for garden-worthy Chinese plants in the western Chinese province of Sichuan. I was in good company: five American plant hunters, a photojournalist, a retired doctor, a lawyer, plus a half dozen Chinese guides, drivers, and a botanist. 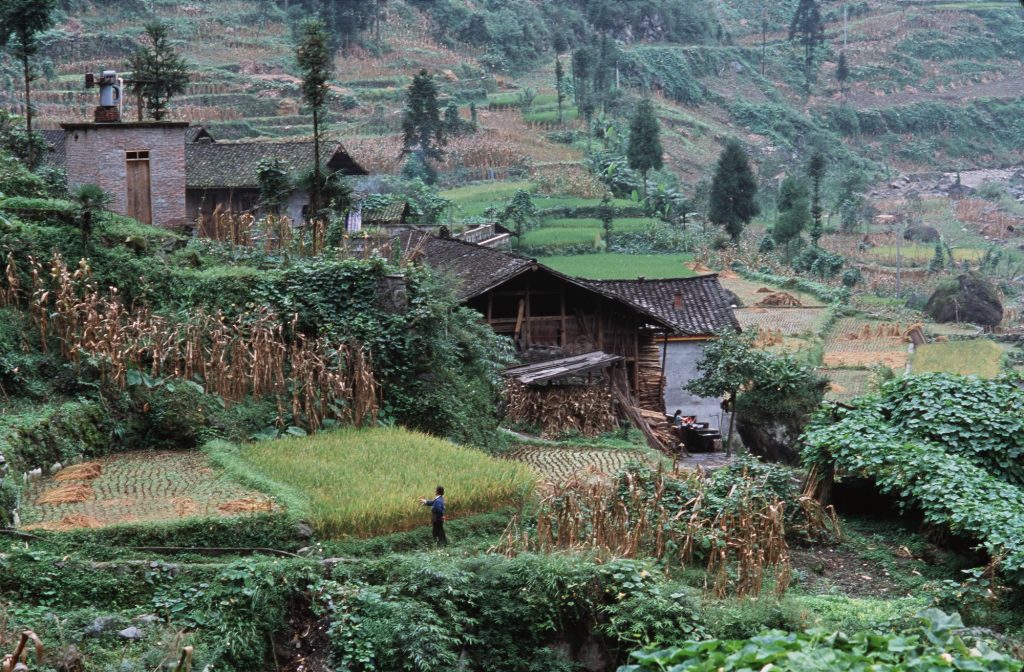 Homestead on the other side of the river near Baoxing 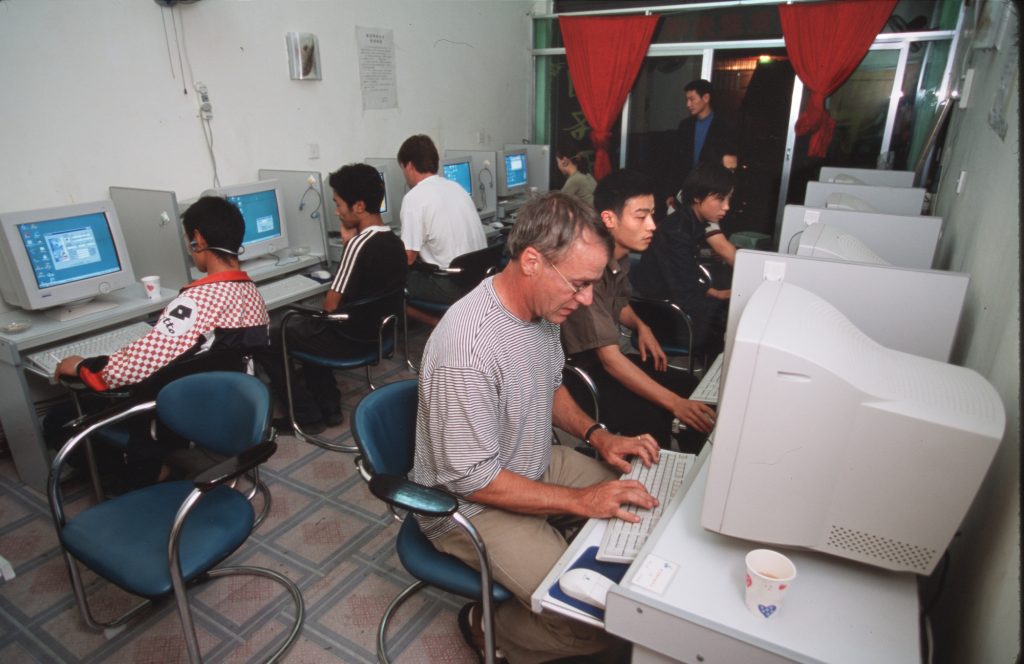 “The Wrench” was busy across the smoky room. I went back to the homepage to check news and saw the first report that a plane had hit the World Trade Center. There were no images or details. It was just after 9:00 p.m. (It was 12 hours earlier, of course, in New York.) The news was bewildering, but there was no cause for panic until the next morning when our Chinese crew, who’d been up late playing cards and watching television, interpreted what they’d seen as the tragic day unfolded in New York.

After breakfast, our guides took us to the local post office to attempt calls home. Remarkably, we reached our loved ones. (It was 9:00 pm EST on the evening of 9/11 in the U.S.). Everyone was shocked but OK. I talked to Rose. She told me Molly, who was 20 and living in Williamsburg, Brooklyn, had spoken for an hour, to her brother Cooper, in the late afternoon. When we left the post office, I learned that our Chinese botanist’s daughter, the same age as Molly, was also in New York. He had not heard from her and was visibly worried. I found a nearby internet café, emailed Molly, and asked her to call Professor Zhao’s daughter. She was safe, also. We were relieved. 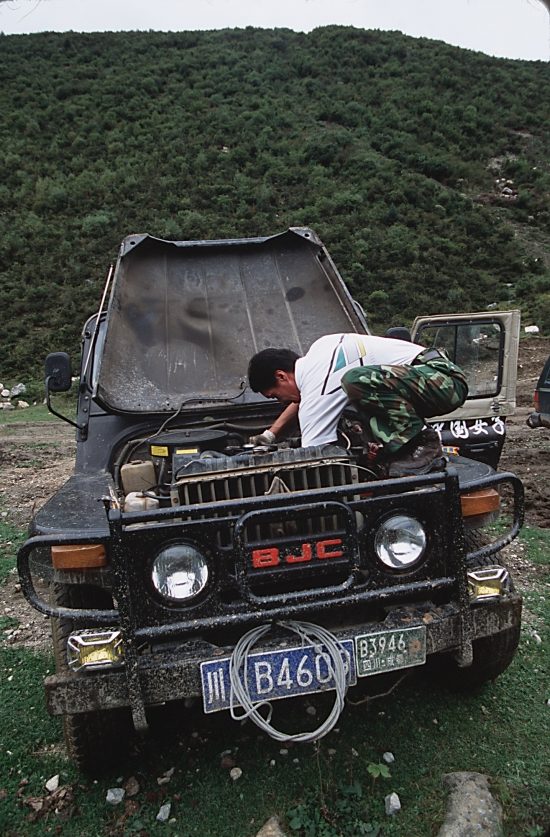 While the group collected plants on the north side of Kanding on September 12, 2001, “The Wrench” worked on one of the vehicles.

All flights were cancelled. There was one choice. We continued driving around in cramped vehicles full of geeks and gear on muddy and dangerous roads for the next three weeks. We kept our eyes peeled for Chinese plants, and only closed them in fear when we passed a car on a blind turn with a thousand-foot dropoff, to the river below, out the side window

I seldom stopped thinking about Rose and our children.

Merciful god, please let me see my family again. The horror of 9/11 gripped us, but we were only intermittently in touch with our families in the weeks to come. I wouldn’t begin to absorb the full meaning of the tragic events in New York until I returned home to a grieving country three weeks later. 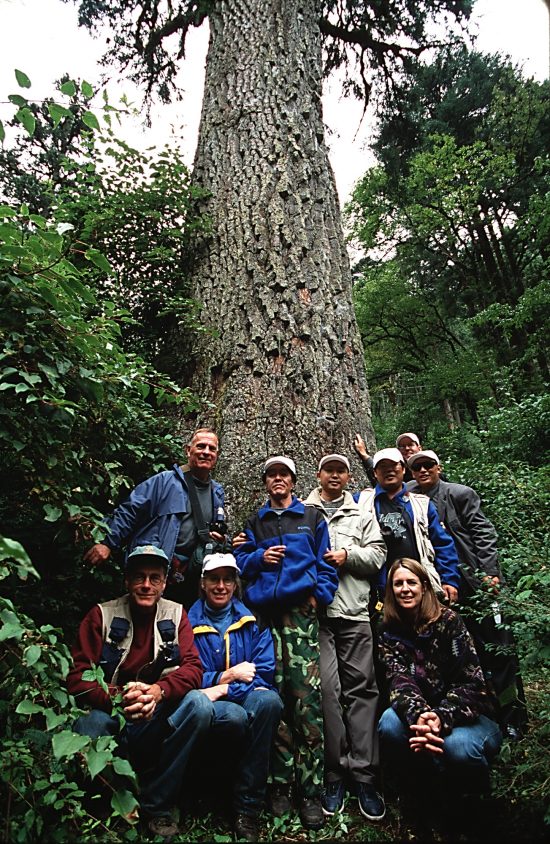 I passed the time with gifted plant and seed collectors whose eyes and instincts are much better than my own. It was a trip for the truly plant obsessed. I am in a high percentile of the plant obsessed but I am lacking talent and skills. You need passion, instinct, a good eye, preparedness, fitness, discipline and courage for plant collecting. I had neither instinct nor a good eye. The best plant hunters have an uncanny sense. They somehow catch a scent and see deep into the woods. My refrain: “What did you see?” Though I was not the best equipped, it doesn’t mean I wasn’t motivated. 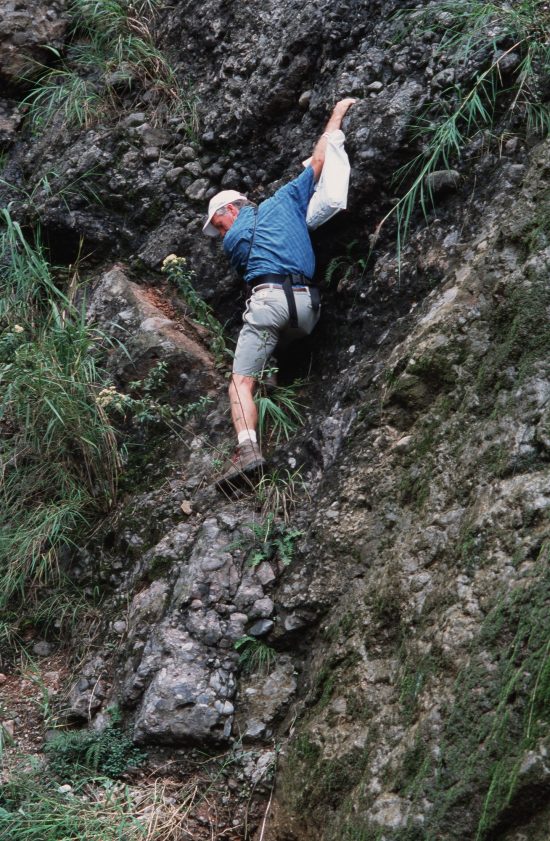 Paul Jones collecting on the drive to Baoxing.

My job was to roam fields, woodlands, mountains and valleys in Sichuan for Jelitto Perennial Seeds. You call this a job! During childhood, I passed summer days digging holes to China, and it took me 45 years, but I’d finally made it. I was honored the company let me sign on, but I was useless. Well, not entirely. I collected over 140 accessions, but only the sun and part shade-tolerant Sedum (Phedimus) aizoon var. angustifolium, still lives in my garden. I adore the simple sedum for sentimental reasons. In case you want to go looking, you may still find one on a dry, rocky slope along a road east of Jiuzhaigou National Park, just past the Black River Bridge. If not, come and see me.

Meanwhile, the false goatsbeard, Astilbe rivularis, thrives in the Jelitto gardens. Georg Uebelhart, my Jelitto colleague, eventually planted a nice form of Himalayan mayapple (Sinopodophyllum hexandrum), grown from my seed, in his home garden. But, in the end, nothing too spectacular. Georg, a dear friend, tried to make me feel better last week when he reminded me how much he liked my seed accession of a stonecrop, called Rhodiola macrocarpa, that has reddish, inflated seed capsules. 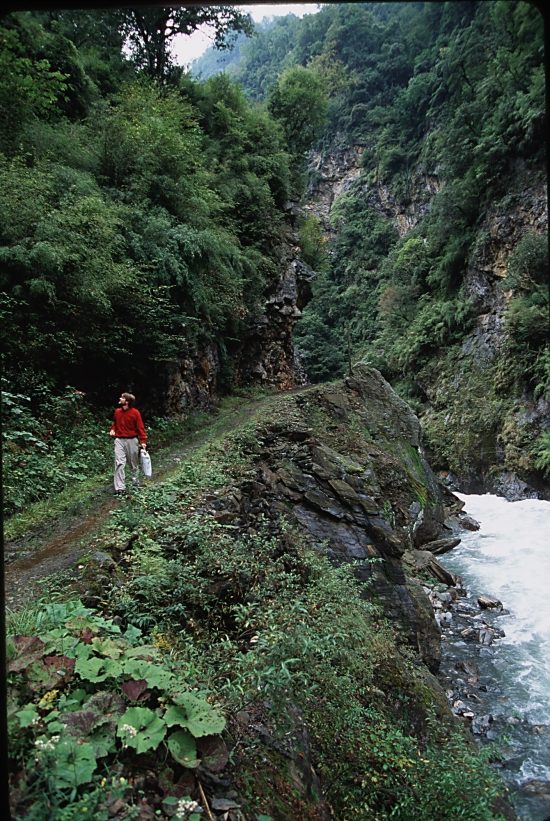 Scott McMahan walks along the Pitaiao River near Wolong.

The remaining species have not made the Jelitto catalog or seen the light of day. They are stored in Jelitto’s seed bank. If nothing else, I am proud that I have contributed to a seed bank. This seems visionary. Maybe it’s as close I get to eternal life. I can just imagine, thousands of years from now, someone growing curious when they see labels marked: “Sichuan 2001” and saying, “Let’s take a look.” My seeds of giant, Chinese giant Jack-in-the pulpits are sown and—lo and behold—perhaps something spectacular after all. 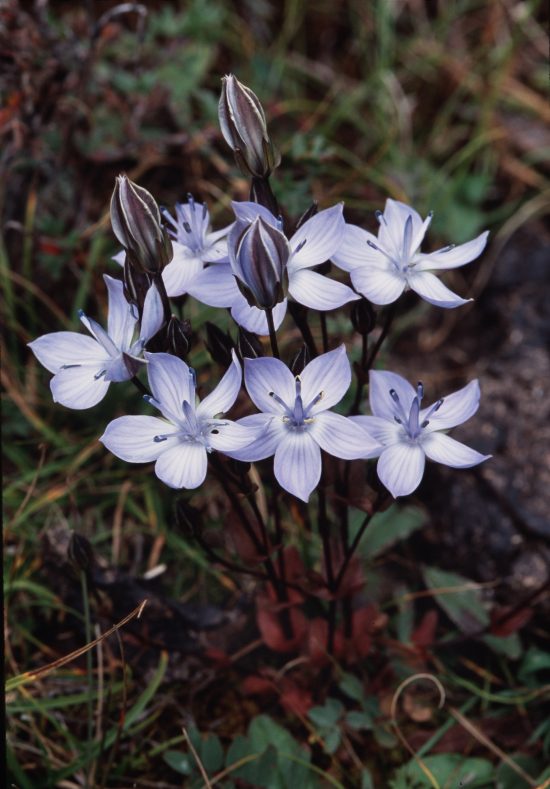 I returned to Sichuan again in 2003, but thoughts of being injured or falling ill, became more daunting. A doctor friend, before the 2001 trip, had recommended a prophylactic appendectomy. The tiny appendage is still with me. I was diagnosed with M.S. in 2000, and my mobility is slightly diminished. Climbing over rocks or crossing narrow streams on small logs is tricky. And no one would want appendicitis where we were. There was no Medivac or EMS. Evacuation from rural Sichuan would take days. 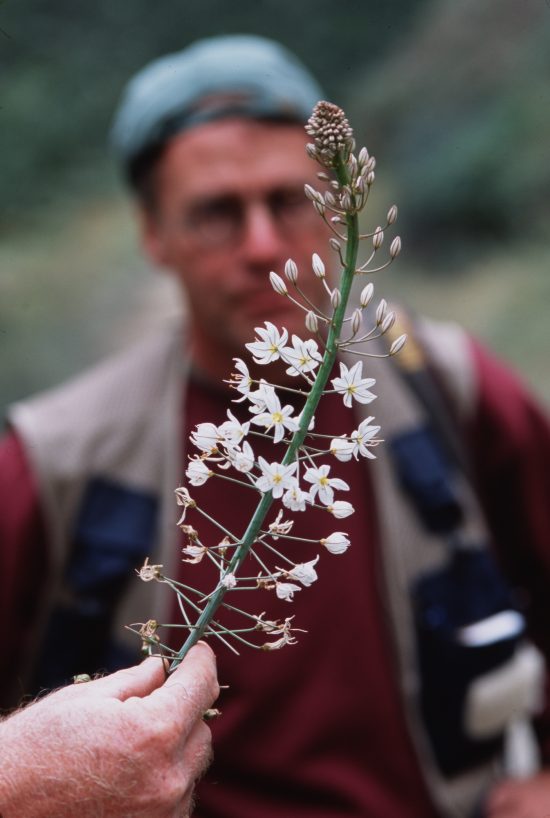 I adored my colleagues and was thrilled to be traveling with them. Though we felt the sadness of isolation in Sichuan, there were great gaps of joy. We were fed well with fresh food that was usually stir-fried and sometimes featured animal innards that defied identification. One brave soul, or another, would volunteer to dip dripping chop sticks into communal platters and pronounce mysterious food options as: Uhmmm goodor Don’t go there. It’s possible chicken sphincters went unnoticed or were disguised by the hot Sichuan peppercorn Xanthoxylum simulans, the go-to fiery flavoring across the province. 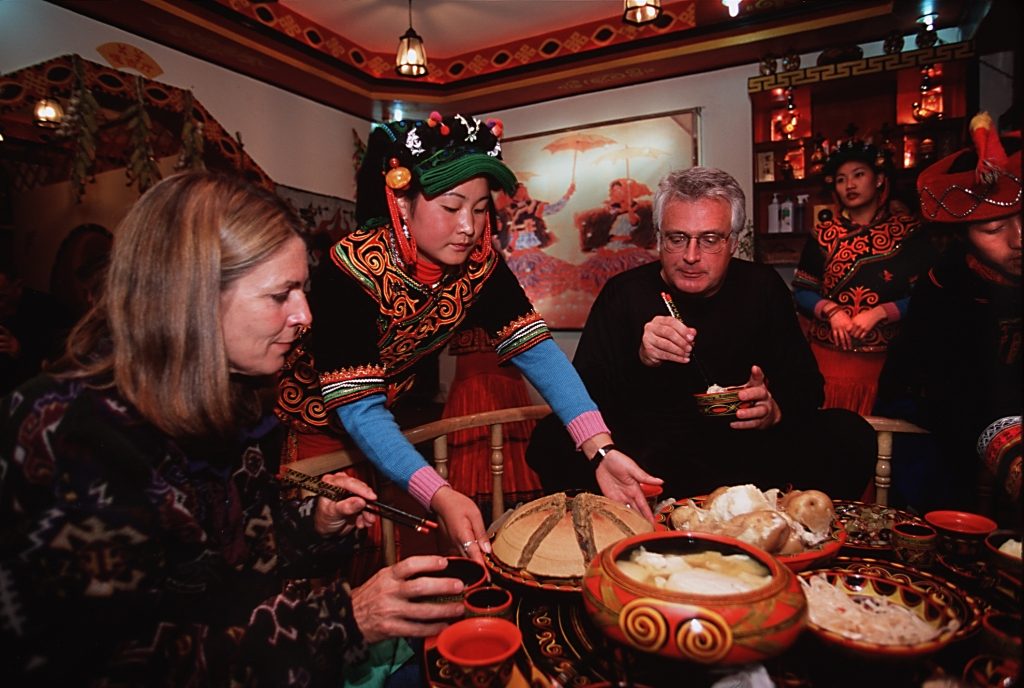 Linda Guy and Frank Bell at a Yi ethnic minority-owned restaurant in Kanding. 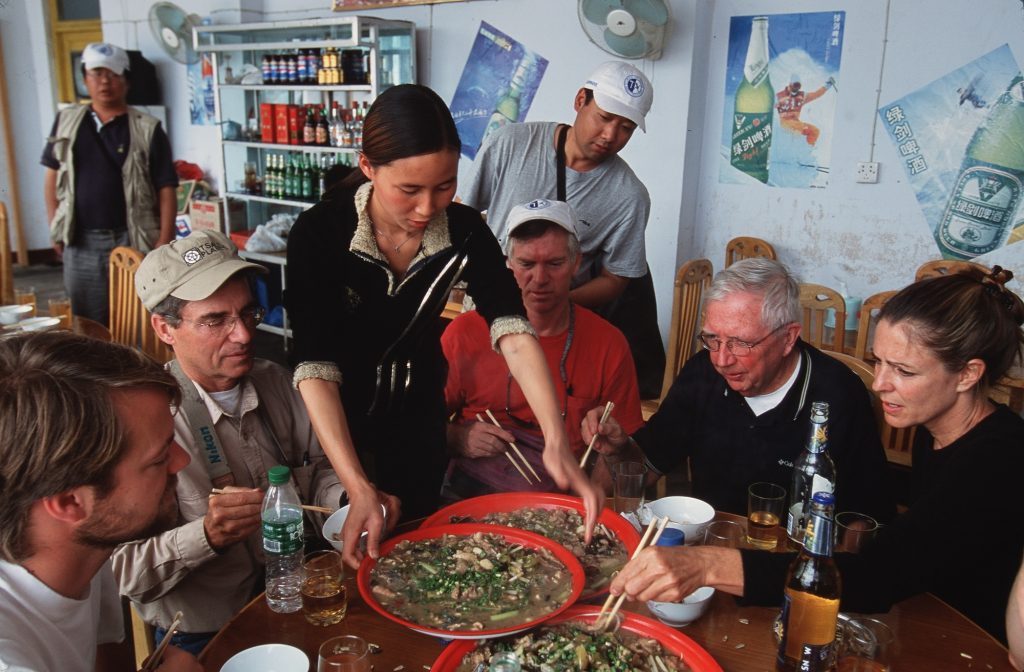 We were treated graciously, sometimes with wonder.

The flora and the food were wonderful, but I was particularly charmed by the Chinese people—in cities, remote towns and, especially, in the countryside. A few times, we went into remote villages and took locals by surprise. They had never seen westerners. Small children came up and stared curiously at the people from another world. 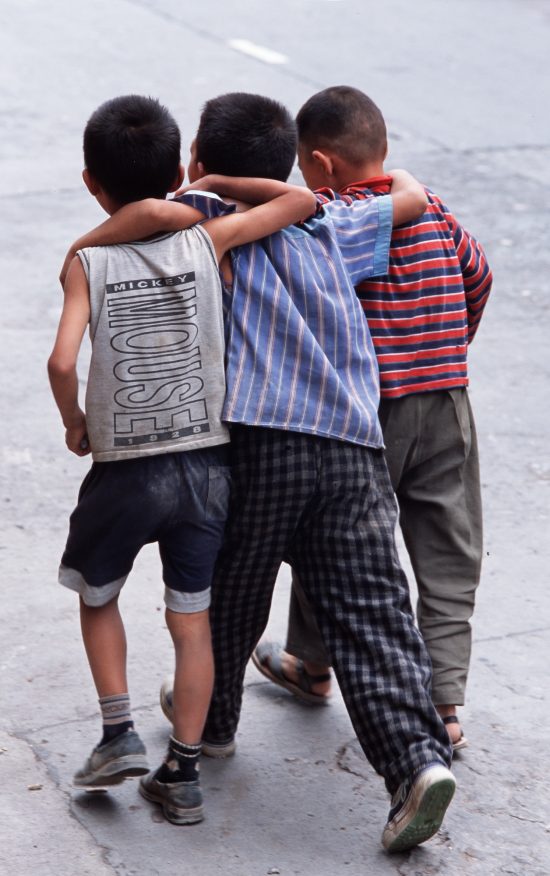 These last few weeks, as the 20th anniversary of 9/11 approached, I began thinking again about the Sichuan trip. I looked through hundreds of Pam Spaulding’s beautiful photos. The Chinese children are grown now. As young adults, they may never know how much comfort their curious eyes and smiles gave us in the weeks following 9/11. 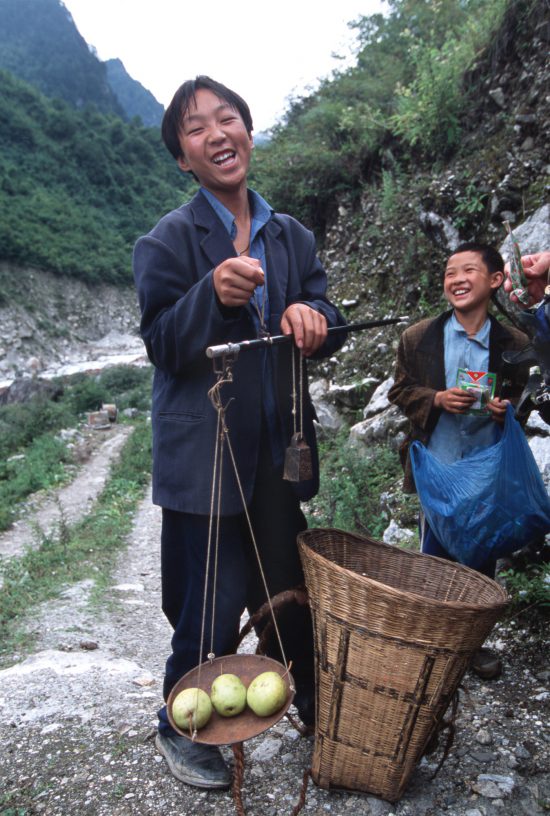 After the post office phone calls that day, we drove a couple of hours outside of Kanding to collect seeds on a hillside, heavily grazed by yaks, on the north side of Mount Gongga. The usually chatty group was quiet; the mood somber. A young boy, wearing a Mickey Mouse ball cap, popped up out of nowhere. We were welcomed onto his vast playground. He and a pal got in on our act and pointed us to seed pods of peonies (Paeonia veitchii).  This heavenly encounter comforted me with a warm, sense of common humanity.  The boys hung around for five or ten minutes. I turned around and they were gone, home to their village, miles back down a nearly impassable muddy road. 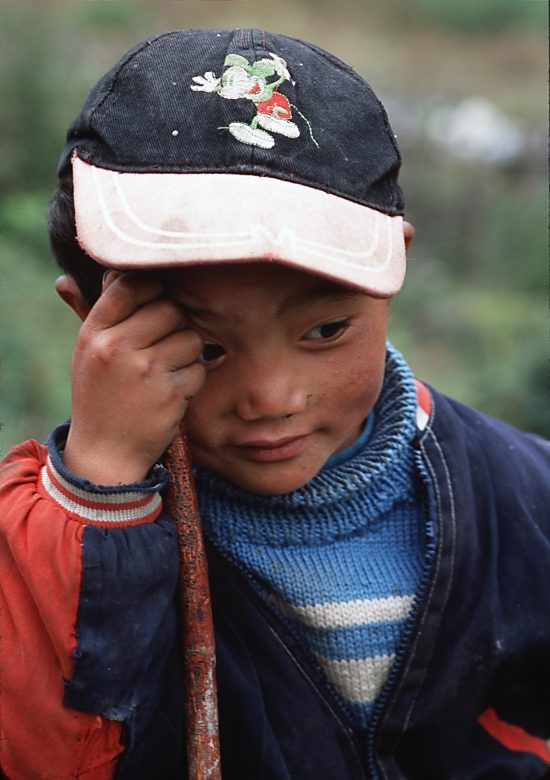 I wondered this week if the little boy, with the Mickey Mouse ball cap, had started a family of his own.

The Chinese government, last week, mandated children’s access to online games be throttled back to no more than three hours per week, and only between 8:00-9:00 PM on Fridays, weekends and holidays.

American gamers are startled, skeptical of the motive, but maybe more Chinese children, with free time, will adjust and learn to play outdoors and become smitten with plants and nature, like the little boy in the ball cap. 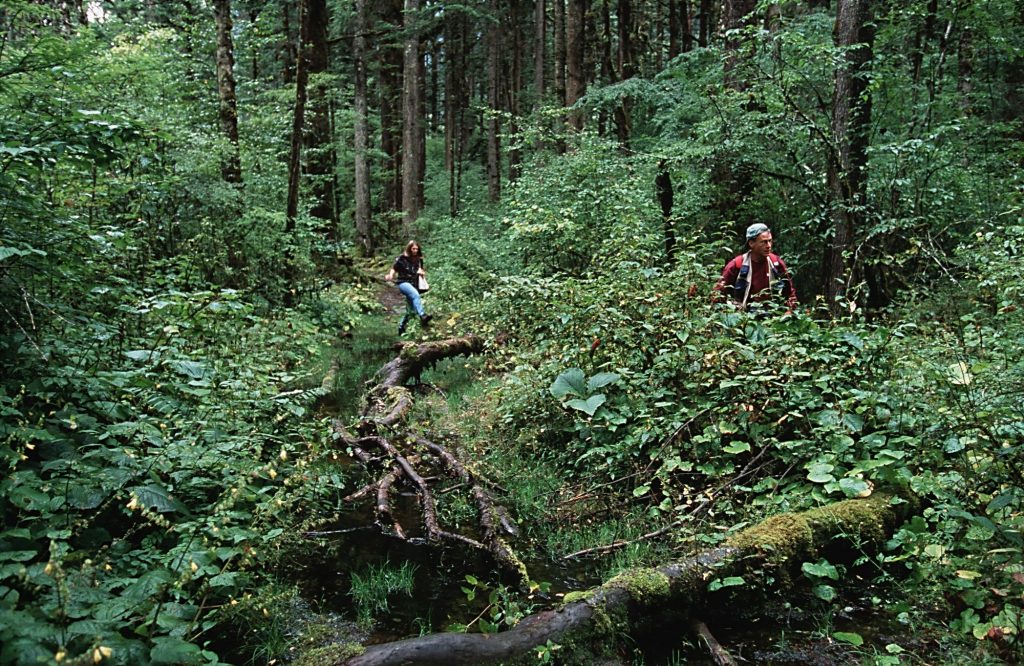 Linda Guy and Allen Bush scouting  on the eastern slope of Mount Gongga. 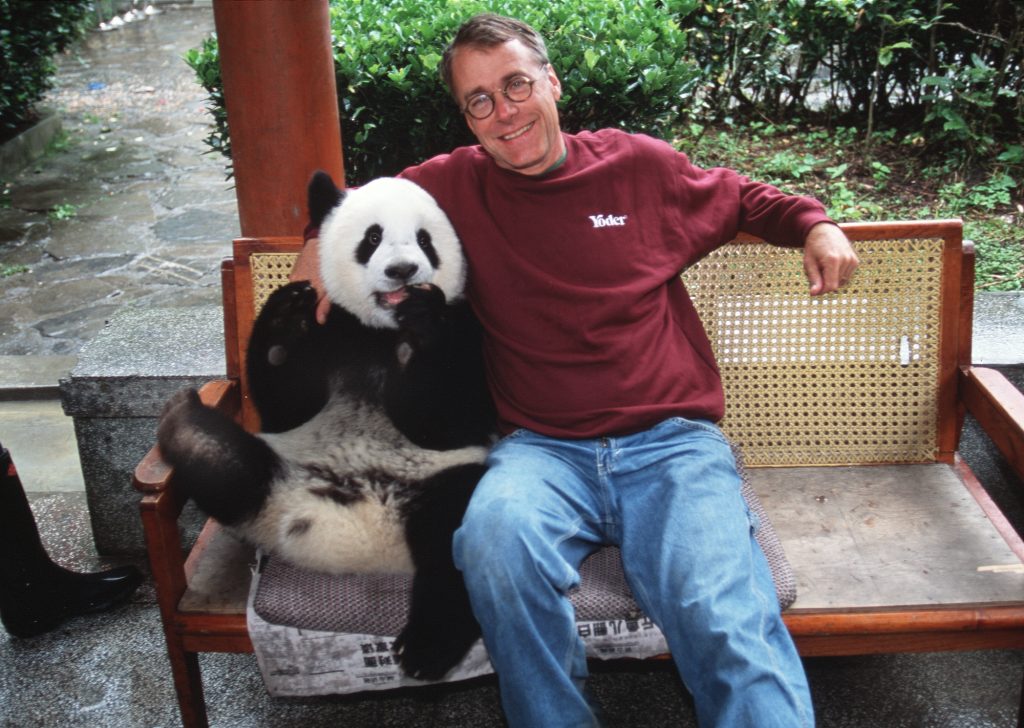 Step right this way… 100 Yuan ($12.00) photo op at the Wolong Panda Breeding Station. “Do NOT attempt to duplicate, re-create or perform the same or similar stunts and tricks at home…” 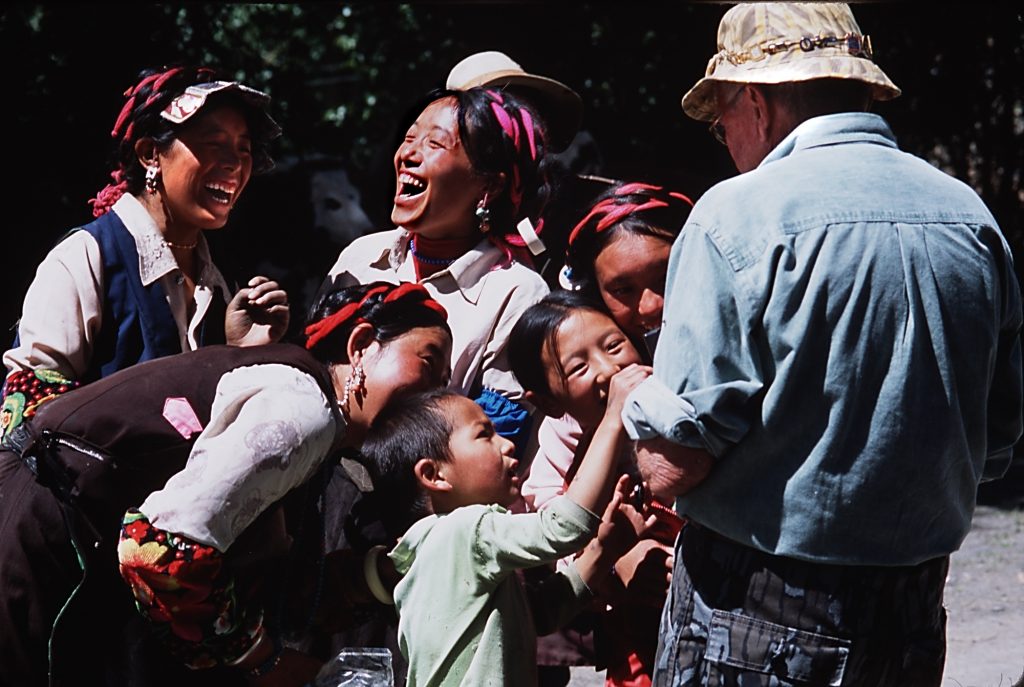 Here’s looking at you. Lots of laughs with Jim Coughlin’s digital images.

Pam Spaulding is a former photojournalist who traveled with the plant explorers in 2001. The photos above are hers. Pam was a staff photographer for Louisville’s Courier-Journal for 40 years. She was a Harvard Nieman Scholar for the 1984-1985 academic year. The distinction is given to the country’s top journalists. She was inducted into the Kentucky Journalism Hall of Fame in 2021 Thank you, Pam. 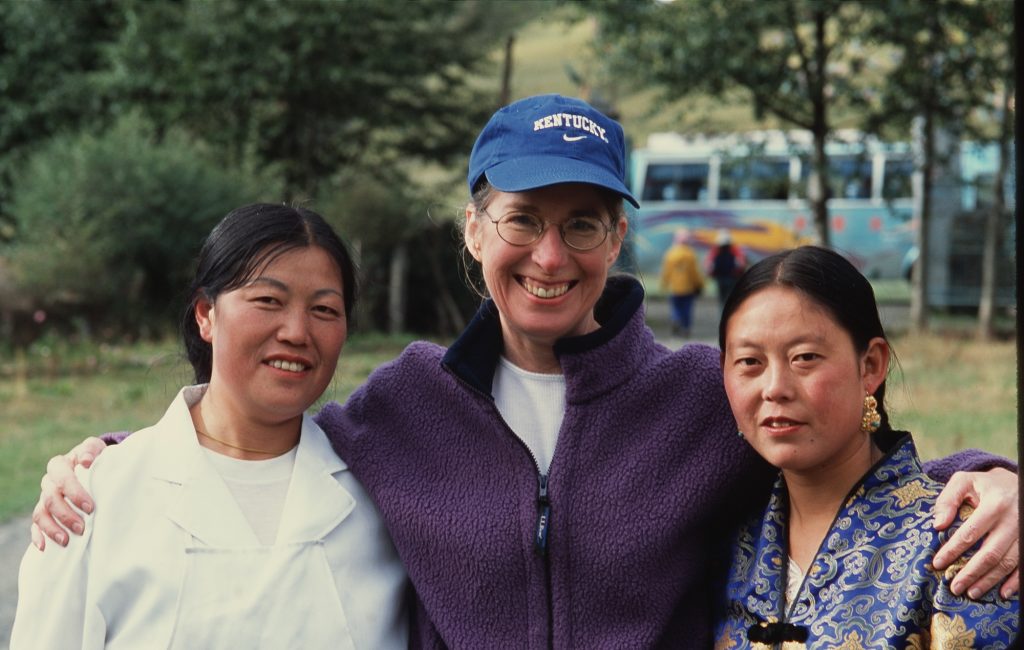 Thanks, in addition, to trip organizer Liu Lee, Professor Zhao Zuocheng, the drivers and “The Wrench.”

And special thanks to Paul Jones for organizing the trip. Paul is the Curator of the William Culbertson Asiatic Arboretum at the Sarah P. Duke Gardens in Durham, North Carolina.