My New Video of Lakeside Garden in Spring 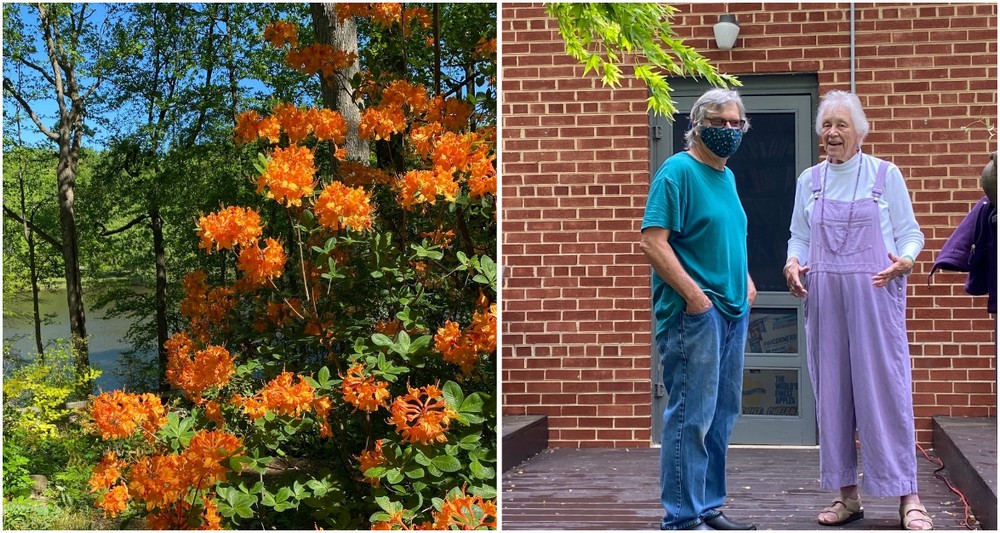 I recently wrote about the Horticultural Society of Maryland visiting my garden and two others near me, and included the link to a video of one of them. Well, I’m happy to say I’ve (finally) finished my video of the other one, which covers the April 2021 party in the large lakeside garden of Mary Lou Williamson. She’s best known in my town as the long-time editor of the weekly newspaper.

Here she is during the party chatting with neighbor Mike Bordelon, the retired manager of the Smithsonian Institution’s Research Greenhouse. Plant geeks always find each other, don’t they? Also shown is one of the dozens of azaleas, both deciduous and evergreen, that make her garden so colorful in spring. Greenbelt Lake can be seen in the distance.

This is my favorite image from the party, which I co-hosted. By Mykel Krizztoffer, it shows me (center) chatting pond-side with two friends.

Okay, heeeeere’s the video, and below are the comments about the garden written by Mary Lou for YouTube’s description section.

Garden and Plant Notes from the Gardener – Mary Lou Williamson

We moved here in Thanksgiving weekend 1998. There were limited number of azaleas around the base of the house, some bluebells and a yucca, plus the deck in back. Also in back were some hostas – nothing else in either the front or back yard.

The streetscape in mid-April shows a variety of plants and flower forms predominantly in yellow, white, blue and purple for as much of the year as possible, to look nice for the passing traffic and especially this year with so many people walking by. The trees are Magnolias Jane, purple, and Butterflies, yellow, and Pink Chimes, Styrax. Note the very tall silvery gray Cardoon that sports purple flowers in August. It is the landscape version of the artichoke. The equally tall gaura blooms are like small white butterflies. Close to the house, the garden features bird’s nest spruce, Asian azaleas, a Goshiki Osmanthus and a Chinese fringe tree and, more recently, 2 cold-hardy gardenias that bloom in late June. In front is a collection of colorful annuals within a color range – this year a variety of pinks, a few reds and purples backed with lime and purple coleus. At the far edge is a stone retaining wall with white flowering Deutzia Nikko spilling over.

The back yard or lawn was originally designed as a play area for small grandchildren. At the bottom of the slope I planted shrubs and small trees to block the young ones from running into the pond rocks. The lawn is surrounded by colorful plantings, sweeping curves and occasional paths to give access. Low stone edges help keep feet out of the plantings. I look for a variety of colors, shapes and sizes and especially for year-round interest. Snow drops are long gone by mid- April as are most of the daffodils and small groups of winter aconite. The height of color in April is from the azaleas in varying hues of purple, red, pink and some white.

In the lower island are two deciduous swamp azaleas that flower white and pale yellow. They are fragrant. The island starts the season with February Gold daffodils, yellow primulas and then geums in orange and red, and some yellows all surrounding a purple gazing ball set low to the ground for safety as deer are frequent visitors to the garden. POND The frog pond is 20 years old. The depth is just under two feet at the deepest end in order to avoid the requirement of a locked fence. The pond features an underwater shelf all the way around for pots whose plants need shallower water. Deutzia Nikko spills down over the rock walls on one side. Special plants include Golden Club; both dark red and rich purple iris, donated by Sandra Lange; yellow waterlilies that will bloom mid-summer; and self-seeded corydalis in yellow, along side the waterfall. The corydalis bloom early and stays all summer. Helping to make the pond patio cozy are red azaleas backed by a variety of viburnams, including some natives that came with the property.

Three trails bring visitors down the woodsy hillside to the lake. In the center is a collection of deciduous azaleas in blends of yellow, orange and red. Further over is a group of pinkster azaleas that grow along the southwest side of the lake. Later in the season large hydrangeas will add a different mix of blue and white hydrangeas. Some winter-early spring specials are the witch hazels in yellow, orange and red and two winter hazels with drooping yellow flowers and some early native white flowered spirea, bridle wreathe. Today on the west tail in bloom is Hartlage Wine, Carolina Allspice, a few jacks and lots of self-seeding English bluebells. A dry run carries storm water down the hill to a double rain garden in order to not wash out the trail. A path of large, flat boulders takes me to work on the steep hillside – weeding or just picking up sticks. Another similar path on the other side leads to my Teak chair to rest before climbing back up to the house. A curved rock retaining wall at the edge of the Lake Park Trail, built three years ago, helps keep the soil from washing onto the public lake path. The gate and fence keep out the local beavers who five or six years ago cut and carried off 30 trees from the wooded hillside, including a rather expensive Appalachian Red redbud and a full-size native redbud and all the forsythia. Also in this area are some Mountain Laurel with white flowers that came with the property, and Clethra alnifolia, summer sweet, which is very fragrant in August. Both grow extensively on this side of the lake.