The triumph of the beetle 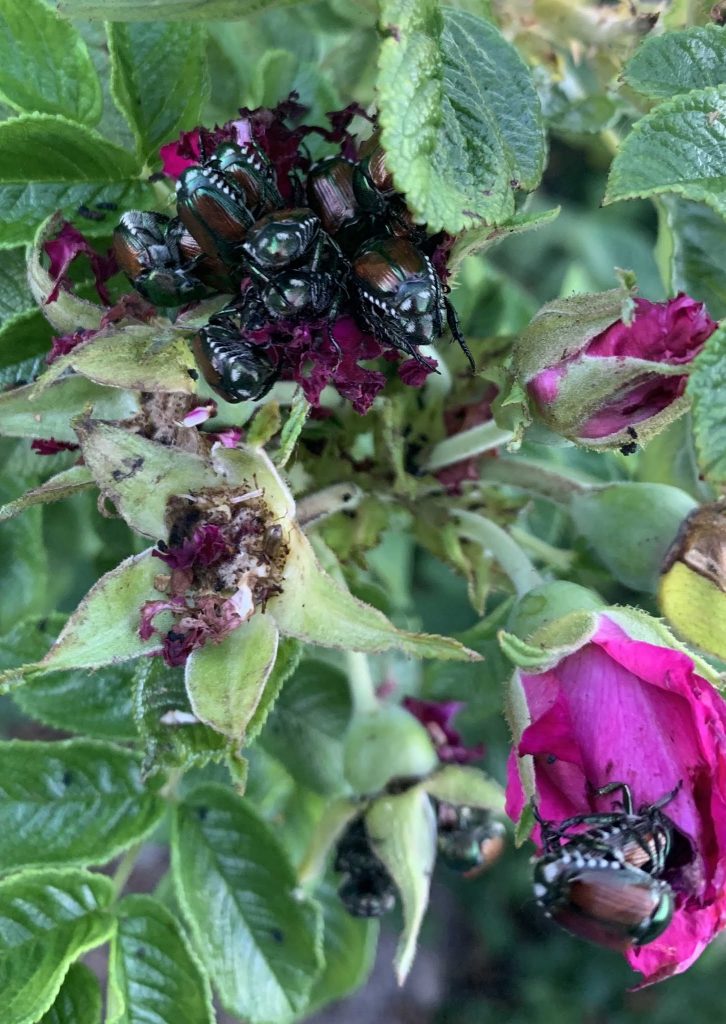 When the detailed annals of twenty-first century gardening history are collected and indelibly recorded in cyberspace, today will be noted as the day that ProfessorRoush grudgingly conceded his unwilling submission to the Japanese Beetle horde. I have lost my solo battle here on the Kansas Flint Hills, completely and irrevocably, crushed by the sheer prolific mass of beetle fertility. How many beetles do you count on the single ‘Hanza’ flower above?  There are at least 14 engaged there in disgusting Caligulan debauchery by my count.

I wave the white flag at last, an unworthy descendent of the heroes at Thermopylae, Masada, and the Alamo. Despite twice-daily rounds of the battlefield under the searing summer sun, hand-picking and crushing the chitinous slobs as they fornicate in their own frass, and occasional mass desperate dispersals of chemical weapons, I can no longer pretend to be winning and must face defeat. I know the war was lost long ago in the eastern and southern United States, but the battlefront continues its westward move. The closely-cropped beetle mass at the top is only the most visible today. There are also  smaller numbers of beetles on all the nearby blossoms, foreground and background.  At night, I dream now only of the crunch of the beetle masses as they feast on the roses, of their laughter during coitus in the bright Kansas sun.

I blame my defeat on many factors, not the least of which is lack of a national sense of emergency. Forget the concerns of ecology and species diversity, Japanese Beetles hold no value to the world. The extinction of these lazy disgusting creatures would make no measurable impact on the world’s ecology. They have no enterprise, no natural predators, no redeeming virtues to promote their preservation, seemingly existing for the sole purpose of consumption, defecation, and procreation. Where are, I ask, the chemists to create a poison aimed directly at the demise of this sole species? Where are the enterprising engineers to envision a fleet of affordable micro-drones capable of capturing beetles to transport and release in the fires of  hell? Where are the biologists to create infertile clouds of male beetles to slow their spread, or to genetically manipulate a lethal virus specific to Japanese Beetles? Where is the evolution of the insectivore who views beetles and beetle frass as delicacies? 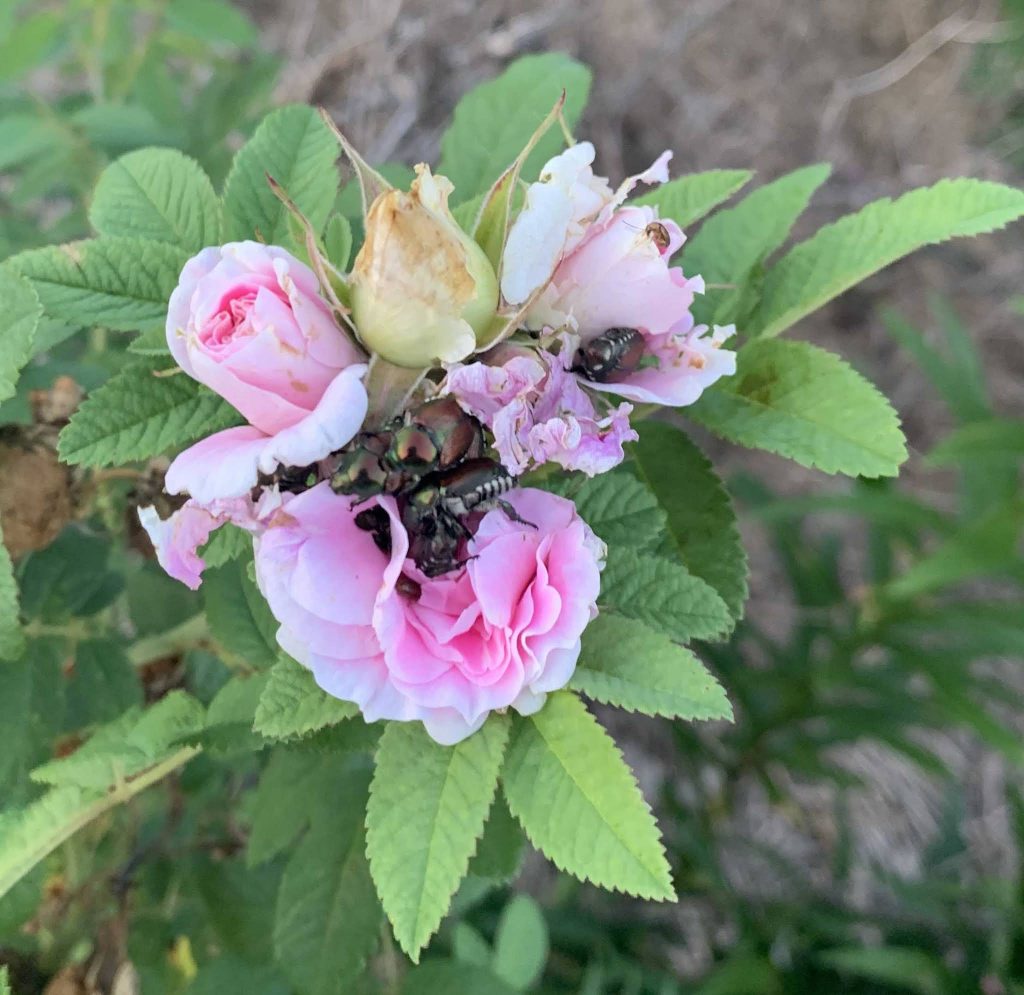 Today’s pyrethrins and insecticidal soaps are worse than worthless on adult beetles. Yesterday, I drenched these beetle clumps directly in modern insecticidal death and an hour later, they were still devouring white ‘Blanc Double de Coubert’ with abandon. I dream, at times, of finding and deploying an old bottle of DDT.  Would it be worth a Silent Spring or three to rid the earth of Japanese Beetles? I hear in my mind the Beetle Voldemort laughing at poor Professor Dumbledore: “You’ve lost, old man.” 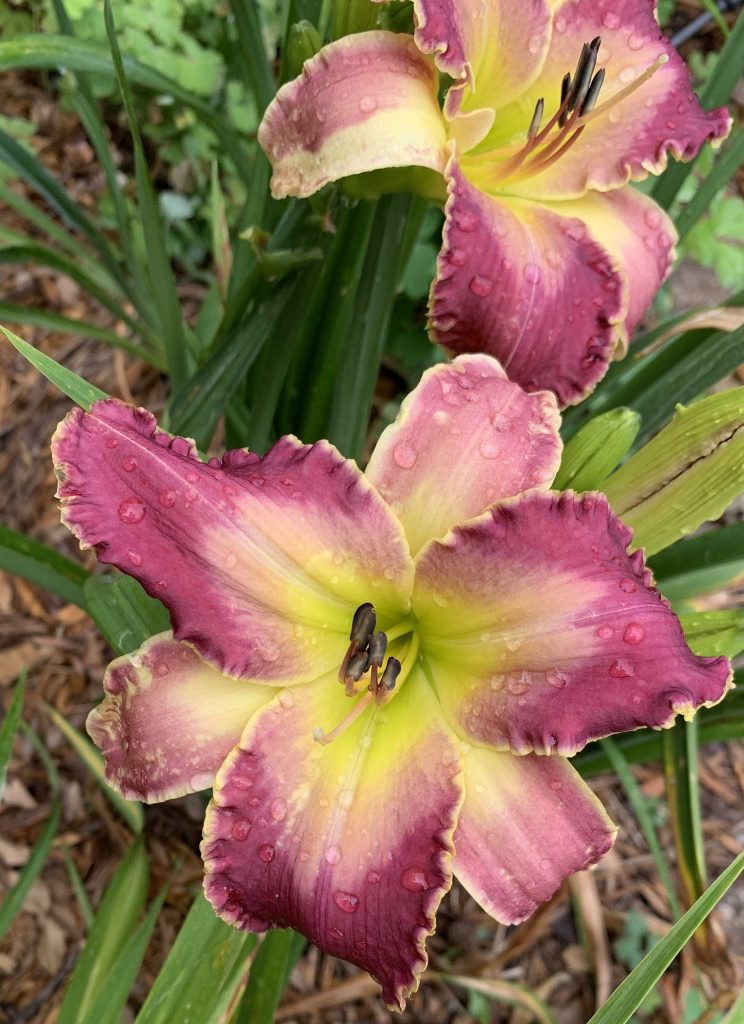 Future minstrels will not sing ballads to the losing effort of ProfessorRoush, but, upon reflection, I take solace that I am a true descendent of those at Masada and the Alamo. After all, despite their valiant and principled stands, they lost too, surrounded by enemies too numerous to count, without aid from the greater world.  If there is hope for the gardening world, it is in Old Garden Roses—resistant to Rose Rosette disease and blooming too early to be ravished by Japanese Beetles—and in daylilies.  I leave you with this ‘Sonic Analogue’ daylily (above), seemingly immune at present to the beetle appetites.  I may have laid down my weapons, but I keep hope that beetle predators will evolve faster than beetle defenses and these daylilies will remain to brighten the rest of my summer days.