Earlier this year I posted that I “couldn’t wait!” until the 2021 opening of the Little Island floating in the Hudson River on New York City’s West Side. After seeing the CBS Sunday Morning report below about the island, I’m more determined than ever to see it in person.

The whole fantastical project sprang from the minds and bankrolls of the billionaire couple Barry Diller and Diane von Furstenberg, who donated $260 million to build the park and another $120 million to maintain it for the next 20 years.  (This is the same power couple who initiated and bankrolled the High Line, which has so reinvigorated the city’s West Side.)

Imagine if more billionaires spent their money creating parks like this instead of joy-riding in space! 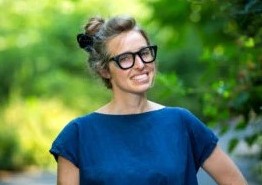 So now there are TWO major new parks/gardens in NYC that I’m psyched to see in person because the new Brooklyn Bridge Park was already on my must-see list.  That was clinched by its Director of Horticulture, Rebecca McMackin, whose show-and-tell about the park is so awe-inspiring. This week she spoke virtually to the Perennial Plant Association, and no doubt inspired all those plant geeks to visit in person.

So now I’m trying to figure out the logistics of a trip this fall. It’s only a four-hour drive from DC but it’s surely the most hated stretch of highway in the East. (West-coasters seem to agree it’s the freeways of L.A.) My recent trips have been via express buses like Bolt – so cheap! – but next time, I’ll spring for the luxury of the Acela train, or a business class ticket on Amtrak.

Broadway may or may not be open enough for me to take in a show while I’m there, but for me the really big show is outdoors. Sorry, museums.