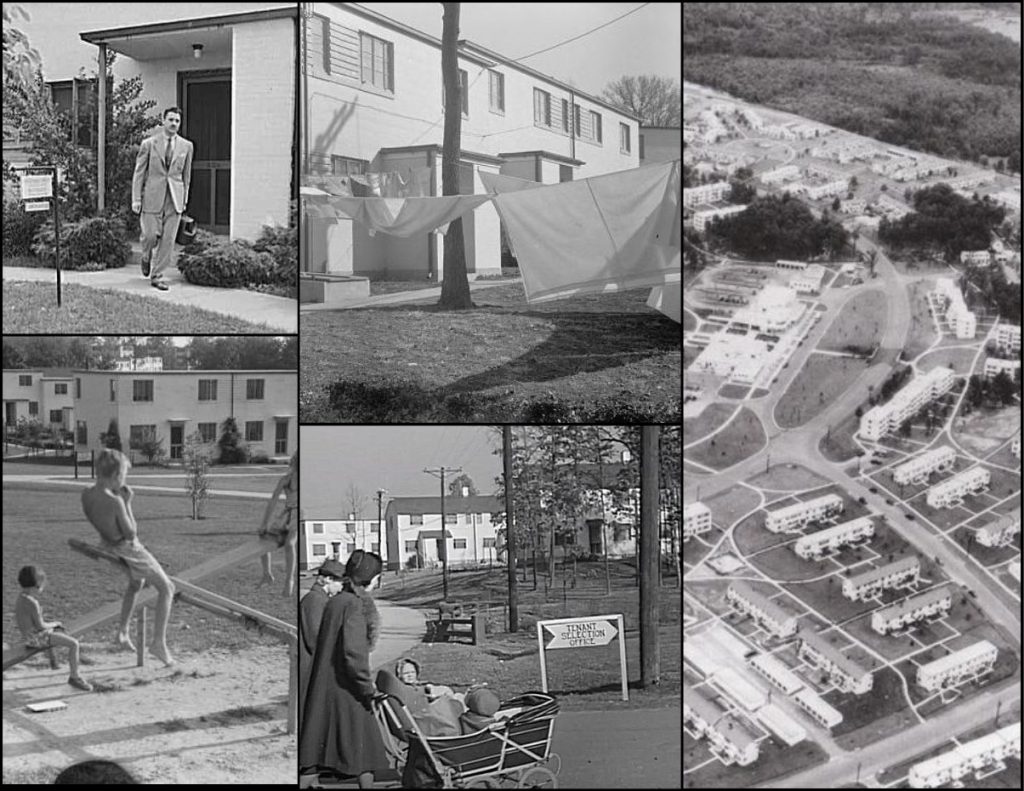 Photos of Greenbelt, Maryland from the Library of Congress collection.

The garden city movement, which began in 1898 in the U.K., is described as a “method of urban planning in which self-contained communities are surrounded by ‘greenbelts’, containing proportionate areas of residences, industry, and agriculture” and that it “aims to capture the primary benefits of a countryside environment and a city environment while avoiding the disadvantages presented by both.”

In the words of its chief proponent Ebenezer Howard, “the garden city concept combined the town and country in order to provide the working class an alternative to working on farms or in ‘crowded, unhealthy cities’.”

I live in Greenbelt, MD, one of three garden cities built by a New Deal agency with the duel purposes of creating jobs and to providing housing for lower-income workers. (The others are Greenhills, OH and Greendale, WI.) Greenbelt fits the name “garden city” in location – outside a city, small size, with plenty of open space and public parks. And it’s surrounded by a belt of green forest, for which it’s named. So far, so good.

But there’s lots more to this interesting experiment in planning that I call home; the federal designers went much farther, designing the humans who inhabited the new town.

I wrote in “How the Pioneers were Chosen” that our first residents were chosen “in a creepy, bizarre experiment in extreme social engineering, with the goal of finding all-American, church-going, rule-abiding, community-minded families.” There was a quota for each of the major American religions (to match their percentage in the DC area), and units were assigned according to marital status and the number of children in the family. Income was capped and wives were expected to be homemakers and were required to bring their laundry in before 4 pm, and never dry it on Sunday. People of color were not allowed (except for many of the workers who built the town) and there was a dress code for the town center.

The director of Greenbelt’s  Museum notes that there was “a fair amount of involvement of the government in your business.” Oh, yeah.

Religious quotas were soon ended (imagine the public hearings about them!); it took until the late ’60s for the whites-only policy to change. 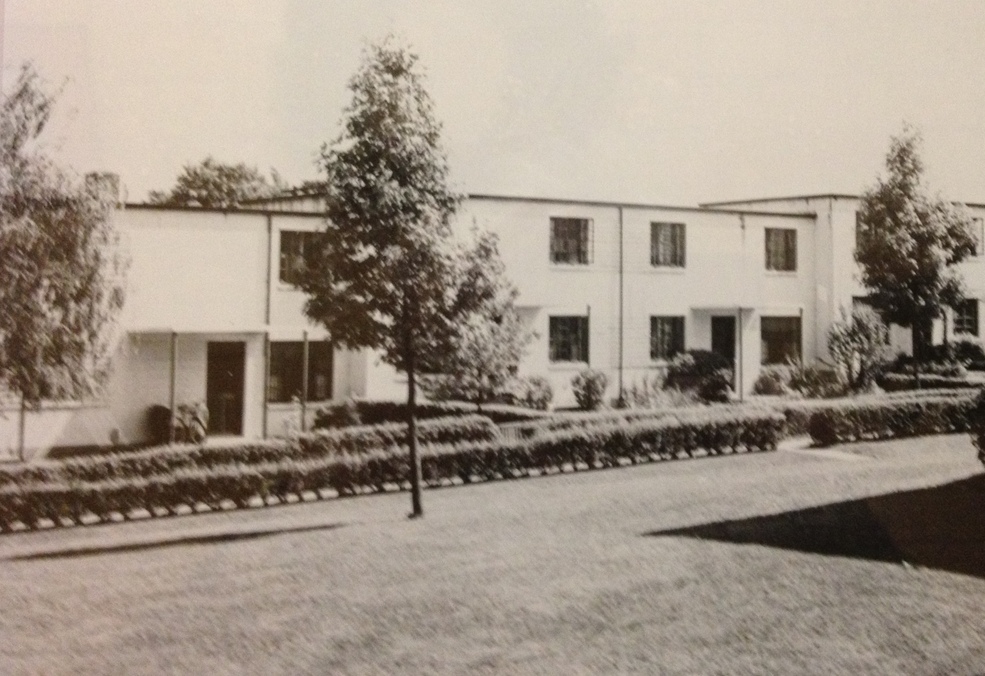 But wait – there are still more “utopian” mandates here. The plan rejected any notion of residents doing anything in their yards but mow the required lawn and prune the silly, high-maintenance 18″ privet hedges. Except for those short hedges, back yards were to be kept open to neighboring buildings and passersby on inner sidewalks, and it was years before pets and fences were even allowed.

Residents were intended to spend their outdoor time – if any – in communal lawns and playgrounds, thus encouraging socializing with neighbors. Privacy was seen as anti-community.  Gardening was something you did in community gardens, not in their front or back yards.

Emergence of the American Back Yard

That view of gardening and other outdoor activities is so shockingly backward by today’s standards, but less so when you consider the times. The Smithsonian explains in “The American back yard as we know it developed after World War II”

After World War II, people began moving out of congested cities and into newly built suburban developments that included private backyard spaces. The adoption of the 40-hour workweek, a shift from blue-collar jobs to white-collar jobs and an increase in disposable income meant people had both time and money to embark on some do-it-yourself (DIY) projects. The result: Uniform backyards were transformed into personalized havens devoted, in part, to rest and recreation.

Front porches and stoops were stripped from the designs, fundamentally changing the focus of community interaction. Socializing migrated from the front of the house around to the backyard. Add the ubiquitous fence and more private,  invitation-only socializing became the popular norm.

So back in the ’20s and ’30s when garden cities were planned and built, the lack of private garden space wasn’t the issue it would become later, and is today. Yet while dress codes and the other worst examples of Big Brother-style overcontrol of residents’ private lives were abolished decades ago, there’s been no reexamination or challenge to the importance of mandatory openness and communal outdoor socializing. In fact, not long ago a coop board member chastised me for not wanting my patio seating to be clearly visible to all passersby, near and far. Not neighborly enough!

So the coop and its staff continue to enforce rules limiting screens, no matter the closeness of back patios to other neighbors’ or (in my case) bad views that need to be replaced with something pretty. So many large back yards are empty and wasted because the openness to passing cars and pedestrians – the fishbowl effect – is so uninviting. Seldom do I see residents IN their yards – adding plants for beauty and the many environmental benefits they provide, and being enriched by spending time in nature.

What’s needed for outdoor spaces to invite us to spend time in them is the vertical elements that create garden ROOMs – the big word in garden design for the last couple of decades.

Did the imposition of so much control get Greenbelt and the other New Deal garden cities called socialist? Even totalitarian? You bet. And the ambitious plans to build working-class towns like this across U.S. ended soon after Greenbelt opened. 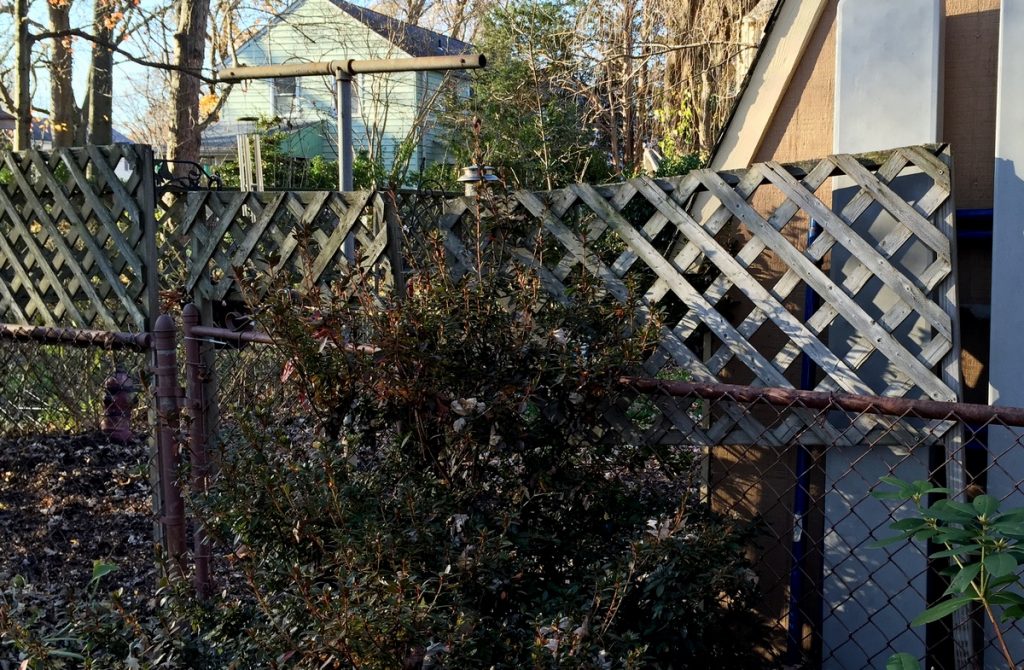 Example of screening that would have looked better if the rules allowed a simpler solution.

Walking around the community of 1,600 homes I’ve noticed some residents determined to achieve screening by hook or crook with jury-rigged combinations of fencing, lattice, vines, old doors – anything to create the screening they need, with lots of shabby results. 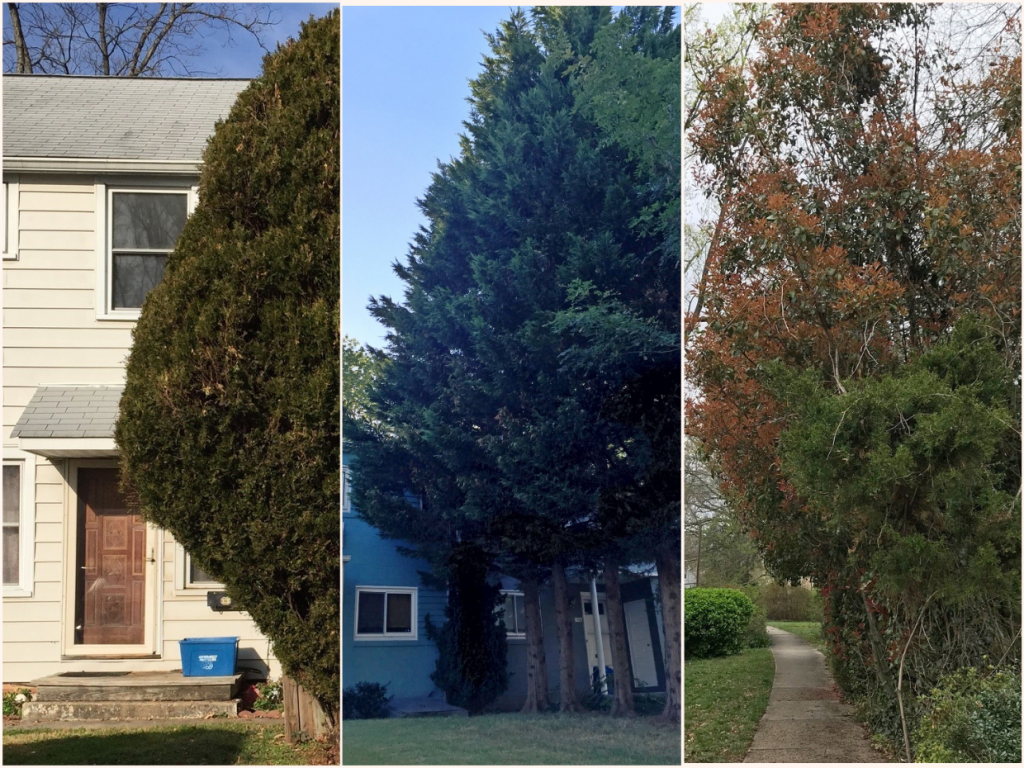 More often, the limitation on built screens has forced residents to rely on plants to do the job, which is allowed since the hedge height limit was eliminated in the ’90s. (Too much trouble to enforce.) Though I’m obviously a plant person, I say just try to find evergreen plants that will grow quickly, then stop, and always staying small enough for our modest townhouse-size gardens. I’ve spent tons of money and almost ten years trying to find the right plants to do all that in several parts of my lot, and I’m supposed to know what I’m doing!! Just like everyone else here, I’ve planted the wrong plants in the wrong places. 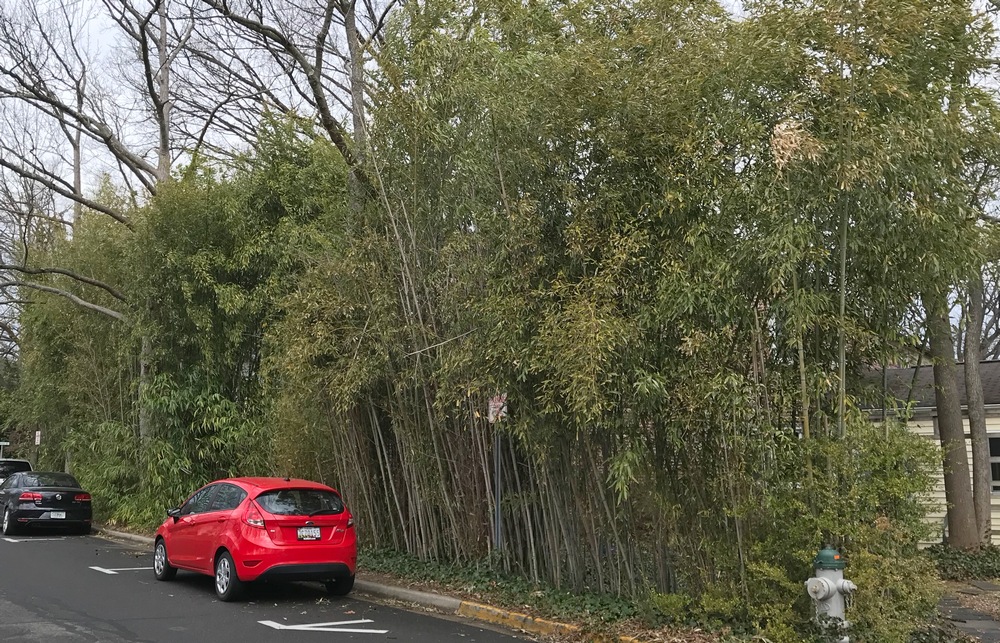 Bamboo screen planted between a back yard and the street.

Across our community, hedges tower over us – far more than a 6′ wooden screen would. So our rules not only don’t save our historic openness; they force us to close off our yards even more, and create pedestrian hazards along roads and sidewalks in the process. Bad rules have created a high-maintenance nightmare.

When I moved here in 2011 I soon became obsessed with the views from the house and gardens. I ranted about my backyard view of garages in “Finally! Perfect Privacy Screen Hides my Ugly View.”

In the front my view is of an elevated parking lot, which I first tried to block with an arborvitae hedge. That led to “I hate my Arborvitae Hedge” and then “Replacing the Hated Arborvitaes with Crossvine.” After the first season I documented the make-over in the video “My front-yard make-over.”

Now the vines intended to block the view are in their second season and growing way too slowly, particularly Crossvine, the only evergreen. If co-op rules were finally updated –  if they allowed for yard solutions that work well for its 21st Century residents and the greater community – I’d have installed a lattice to grow the vines over instead of a wire, and the solution would have been achieved in a day.

Now THAT’s a rant many years in the fomenting. It’s prompted by the recent election of a a majority of new members of the co-op’s board of directors. The gardening community here sees a ray of hope.