Gertrude and the whale 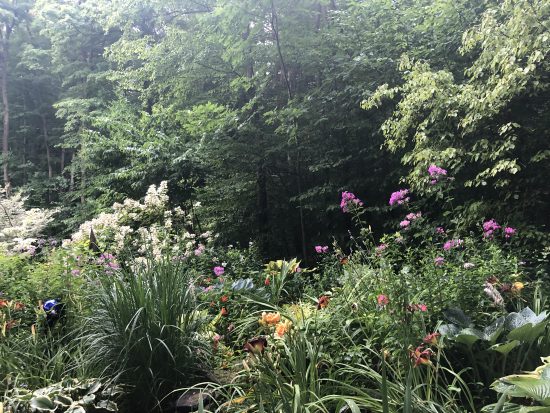 Gertrude Jekyll (1843-1933) is credited as one of the founders of England’s lush, flower-rich, painterly cottage garden style of horticulture (she was a painter as well as horticulturalist). The style has been popular ever since, in gardens from the British Isles to North America, but it requires a certain amount of domestic space. In cities, increasingly dense housing threatens its survival. My walking group notices it dwindling as we walk the neighborhoods. We note the effects on urban air quality, privacy and noise buffering, and we reflect on the effects of “Gertrude-Gardening” on the oceans.

What has Gertrude got to do with oceans? Everything. Plants, shrubbery, trees, compost, and mulch require and reconstitute healthy soil, but the cycling doesn’t begin and end in the soil. Healthy soil contains minerals such as calcium, which stimulates enzymes to help plants absorb other nutrients. Calcium occurs in limestone found in mountains thrown up from ocean beds during eons of earthquakes. These break down into soil full of calcium derived from marine shells. Calcium is also plentiful in the flesh of salmon which feed whales and other marine animals.

In my part of the world we see post-spawning salmon expire in the river beds to which they return after their ocean life. Eagles seize the carcasses to feed their young up in tree-top nests. They drop bits of salmon flesh onto the forest floor, where some feeds soil and some is washed down rivers back to the ocean – back to the whales. It’s a cycle of minerals: soil is ocean is soil. We gardeners love the seasonal cycle, but here is cycling on a grand geo-chemical scale dizzying to contemplate as we perform our humble sowing, weeding and harvesting tasks.

The marine-terrestrial cycle being what it is, it’s not enough for cities to provide a few parks, to make do with roof-top gardens and hanging baskets. Earth herself (Gaia or Gea—the “geo” in geology) needs to be dominant, tree-covered, unpaved, seething with microbes, insects, and seed-dropping birds.

The preservation of private gardens (as in the 19th-20th century “garden city movement”) is not a matter of privilege, but a necessity of ecological health. Crowded urban neighborhoods need to be greened, as the great British housing-for-the-poor activist Octavia Hill (1838-1912) stressed during England’s turn-of-the-twentieth century population boom. Today, new housing developments must include green-space, and developers can be rewarded for including it by being given tax breaks. Private house-owners who maintain garden space rather than subdivide can also receive property tax breaks, for green-space benefits the whole public—and not only the humans. As we see, ocean and earth are all one system, and urban over-density tears at its fabric. (But then, we gardeners always knew we were saving the world.)

Octavia Hill and her sister Miranda (and their colleagues) understood this when they began the Kyrle Society in Britain – the splendidly-named “Society For the Diffusion of Beauty”. If something looks beautiful, such as a majestic tree, a glorious bee-attracting flower bed, a leaping orca … that’s a tip-off that it’s part of Nature’s balance. As the 18th century horticulturalists, plant collectors and “great park” creators understood, beauty was not the icing on the cake; in both aesthetic and ecological terms it was inherent, and based on balance. We suburban gardeners can on our humble properties replicate the sweeping artistry of both the grand estates and un-spoilt natural landscape.

Whenever I stroll past a neighbor’s bounteously blooming household garden, I think of Gertrude Jekyll. I think of all that calcium, nitrogen, and phosphorous being invisibly sucked up by the fungal partners of the roots of the plants. I’m glad the ocean carries on feeding the earth and the earth the ocean, and I fancy the whales and salmon, swimming through their part of the whole, are also glad.

S. B. Julian gardens on the west coast of Canada.