Are roses a waste of space?

The garden is about to peak, Charles says. As I’m very focused on later flowers I’m surprised for a moment. Then he says that the ramblers are out and I acquiesce. At least three are impressive monsters and one of them, Wichurana, has a fantastic perfume, which you can smell from yards away. Which is special in a scented flower, as most require nose sticking. 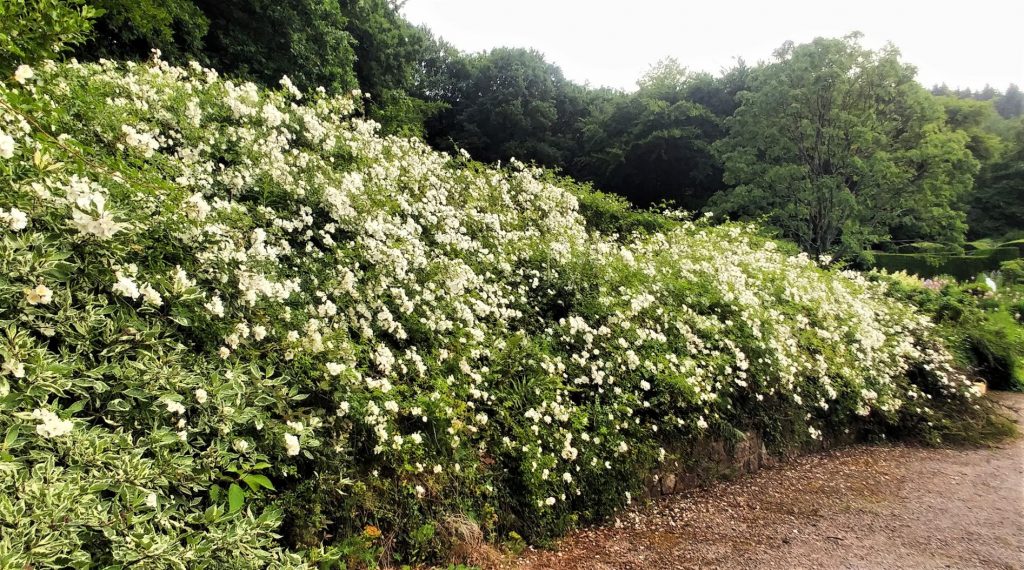 A monster, full of scent.

And our shrub rose bed is doing its thing at the same time. Unusually we don’t have a random, or even carefully selected group of roses. We have gone all out for one rose, one which we love, and one which, in the right weather, also scents the air. We have something like nine or ten Felicia in one bed. (Sounds wild!) Felicia is a hybrid musk, and has been delighting people for over a century now. But check the disease and pests it is liable to, via that link.

And it was this rose which exasperated me today and made me wonder, not for the first time, whether roses are worth the trouble. Because they are unusually troublesome in my opinion. Many are subject to a variety of illnesses and fungus. They mostly wish to be pruned, at least once a year, and they have thorns! I know this to my cost, since earlier this year I got one stuck in a finger and the next day my finger swelled up and went all red. I looked it up on Dr Google and learnt I could die of this. I didn’t, as you have guessed, but it did spoil a whole morning.

And why did Felicia exasperate me? Because it has hundreds and hundreds of flowers – though I confess I haven’t actually counted them – and lots of them have overnight decided they are done. They have gone brown. Brown is not good. It looks bad. It makes me hit it, which does indeed cause many unsightly brown blobs drop off, but not, damn it, all of them. What a ghastly trick. What else goes over so maliciously?? It wants pruning again and I only did it a few months ago. 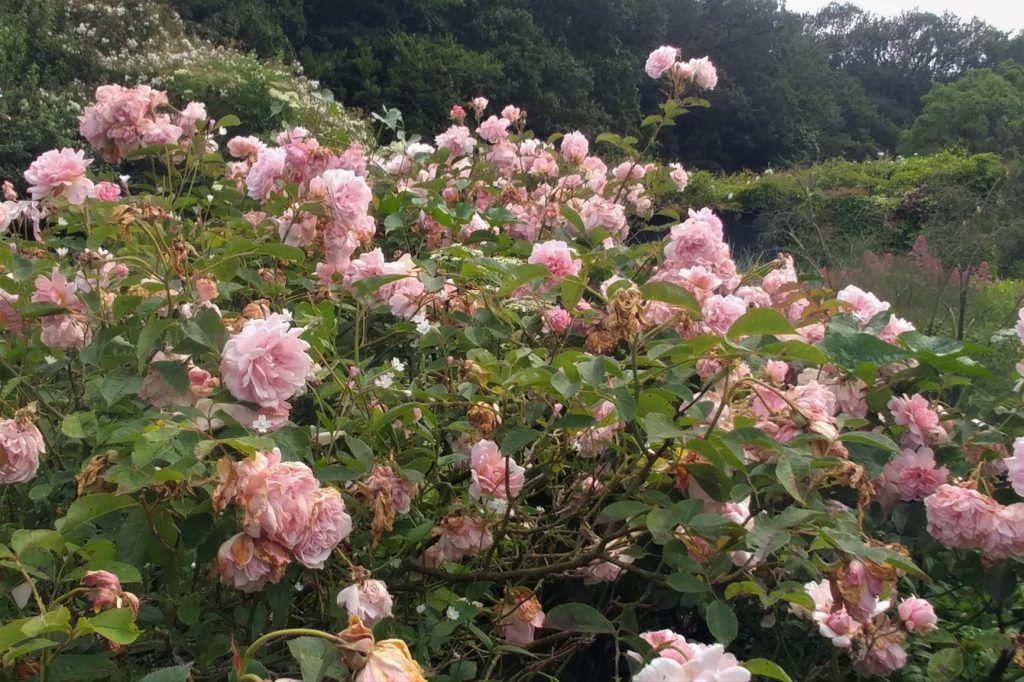 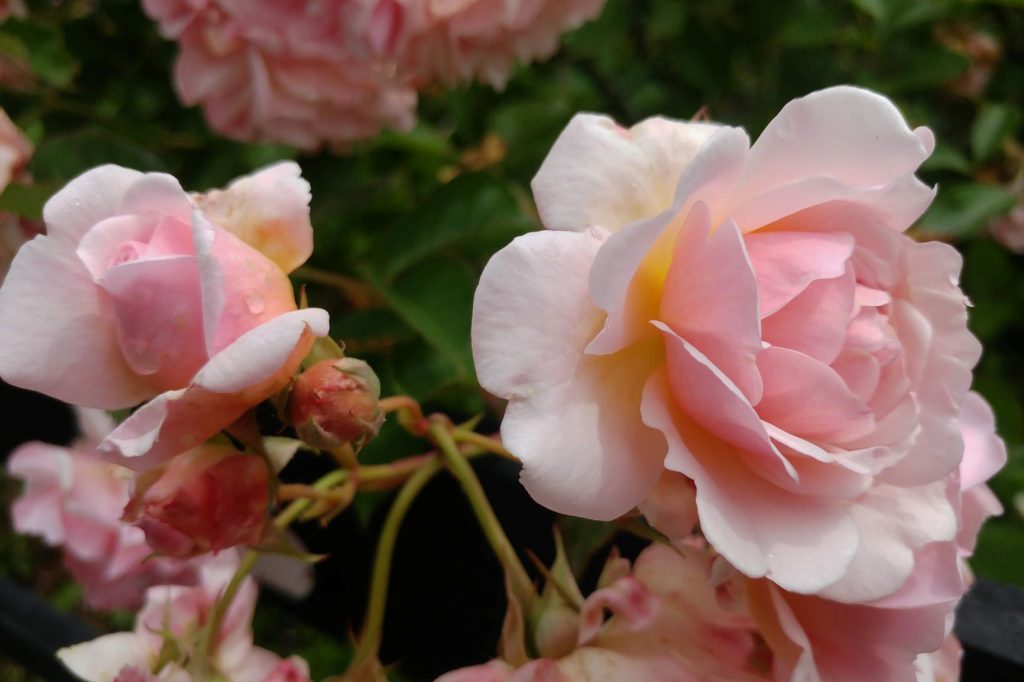 Felicia – isn’t she gorgeous?! When she’s not gone brown…….

Hedge trimmer?? Well, maybe, except I have the added frivolity of a clematis growing over them, to complement their second flowering. Sigh. I did deadhead them last year and I did get a good second flowering but I’m not sure I can face it again.

Those of us with sceptical eyes also know that most roses are not delightful to look at in winter. Most shrub or bush roses have ugly legs and display them for all to see when the leaves are down. Sometimes, in the hybrid tea and similar models, they show their legs in summer too. Yuk.

They used to give a rose to us lucky speakers at the Hay Festival, along with a far more welcome bottle of booze. They were the most horrible things you can imagine. Stiff and ugly on an enormous stalk. Scentless, just to make fools of all those who inevitably sniffed them. Their only possible merit would be as an assault weapon. 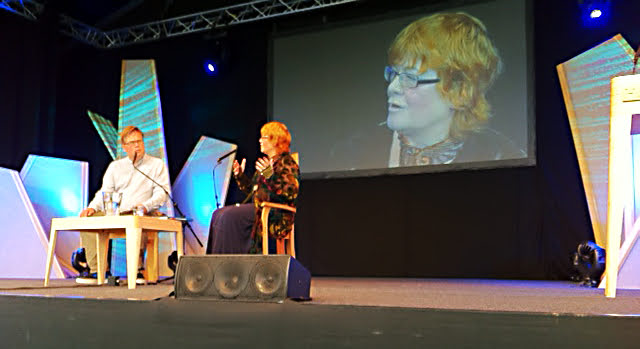 Me at Hay Festival – but I couldn’t find a pic of the ghastly rose! (Yes, that is the revered Tim Richardson interviewing me. Happy day)

Most roses though, are beautiful and somehow evocative. Even a photograph of one beautiful rose flower in the middle of winter can lift the spirits. So when they haven’t gone all brown and dishevelled, they can be a pleasure. That does draw you to an inevitable sniff and surprisingly that is not always rewarding. Sometimes, nothing. But recently we came across one that was actually horrid. Which had us both repeatedly sniffing, in disbelief and distaste. Strangely I didn’t take note of the name.

So. Hm. I haven’t yet tipped into getting rid of them. And Charles is quite right, the ramblers are a Thing. And they are no trouble generally speaking, though the one attempting to wrap itself round our broadband fibre cable may be inviting problems. Apart from things like that, they may be kind. They don’t need pruning (though there IS a pruning trick. Wait for next post..) unless you have been mad enough to plant one over a small arch (you know who I am thinking of, Jessica..). The flowers are mostly small and  mostly disappear discreetly. And they have an undoubted wow factor.

However, I also have to admit that most of our ramblers have struggled up to the top of trees and flower there, hardly visible to frustrated earth bound humans. 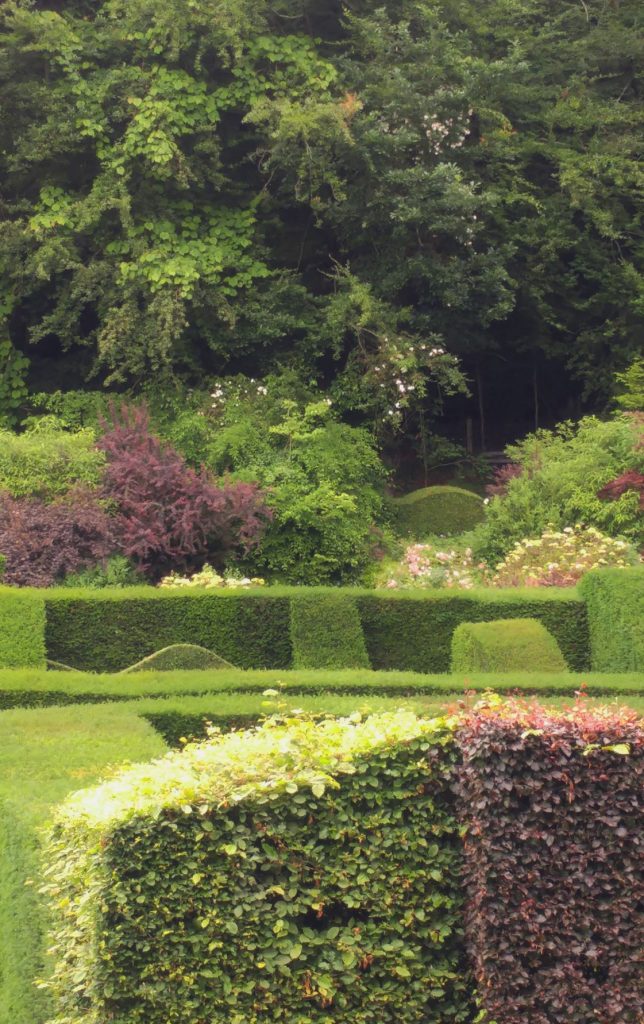 Paul’s Himalayan Musk. Can you see it? What is the point of that!?

And why are so many ramblers white!!?? 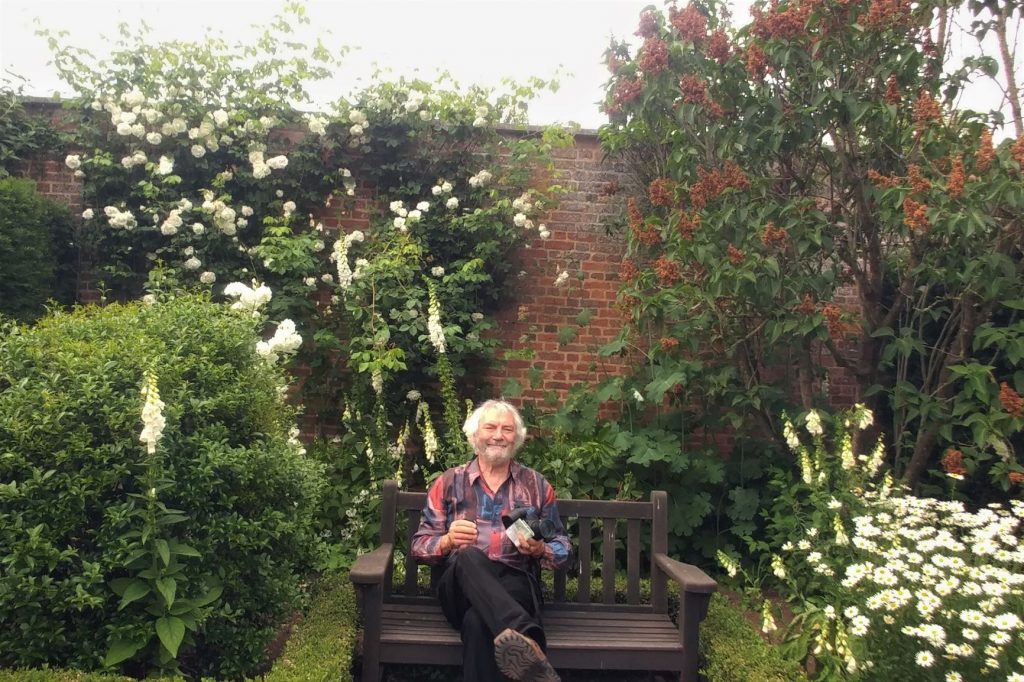 Charles at Hampton Court, Herefordshire, enjoying a white rambler…and a browned off lilac – roses are not the only thing which can go over badly.

There is a garden not far from us which has grown ramblers over everything, everywhere, just rambler rambler rambler everywhere you look. I do get bored of mediocre gardens being described as ‘inspiring’ but this one is not mediocre and really and truly is inspiring, for those with space. I might even  have done the same thing if I’d seen it early enough and believed that I could have settled for two or three amazing weeks every year. I’ll introduce you to it in my next post.

So I won’t dispose of the roses yet. Indeed, we have one,  Kiftsgate, growing over the garage roof and I often wonder how on earth we will dispose or manage that when the roof inevitably disintegrates. It has made its own little world up there, a true roof garden, except that no-one can go near it. I have no idea what is now growing with it after 30 odd years. 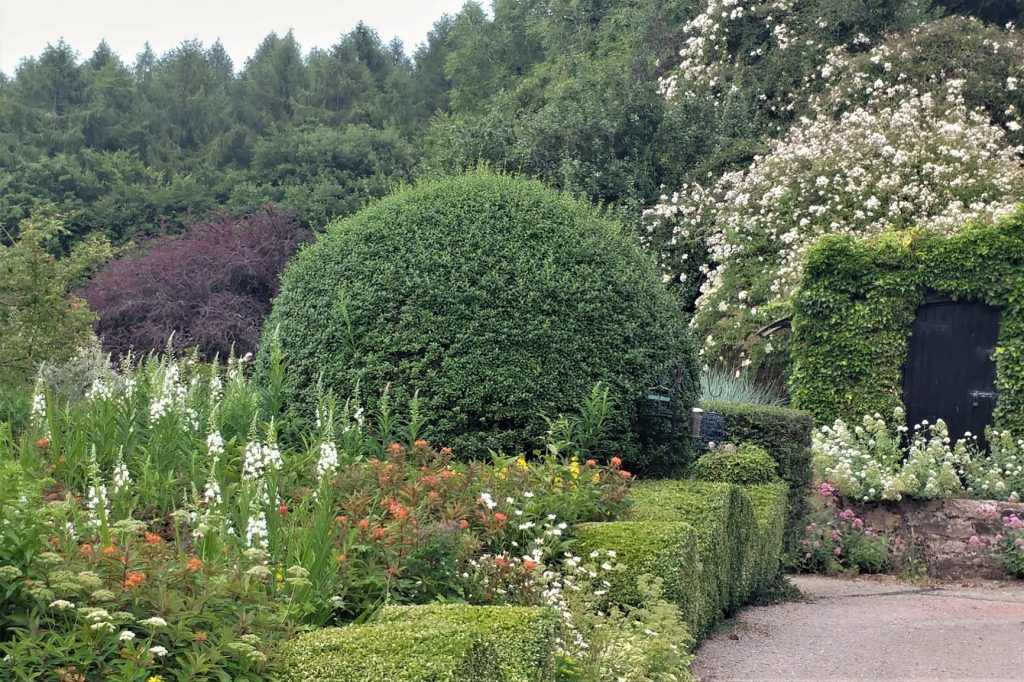 And, what do you know? I just filled three empty pots on our terrace with…roses. They smell gorgeous..