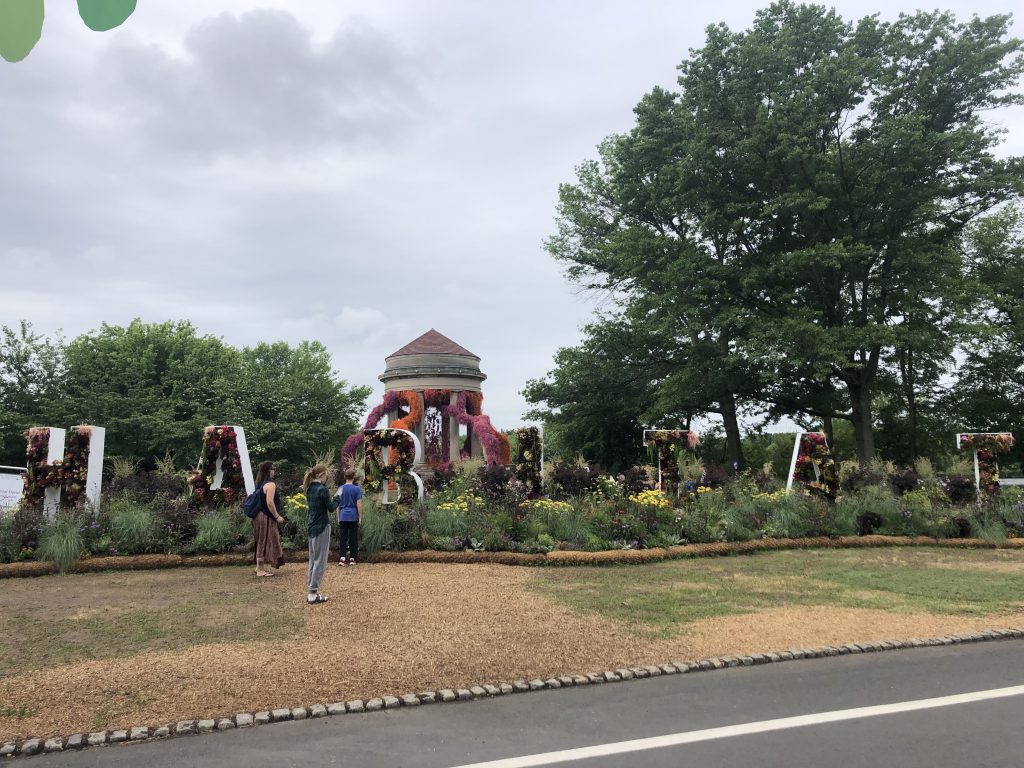 It’s better to be outside. That is surely one of the central takeaways from the past year. Rather than simply cancel its annual late winter event, which has been held for 193 years, the Pennsylvania Horticultural Society decided to hold its 2021 flower show later, outdoors, at Olmsted-designed FDR Park in South Philly. The show is entitled “Habitat: Nature’s Masterpiece.” 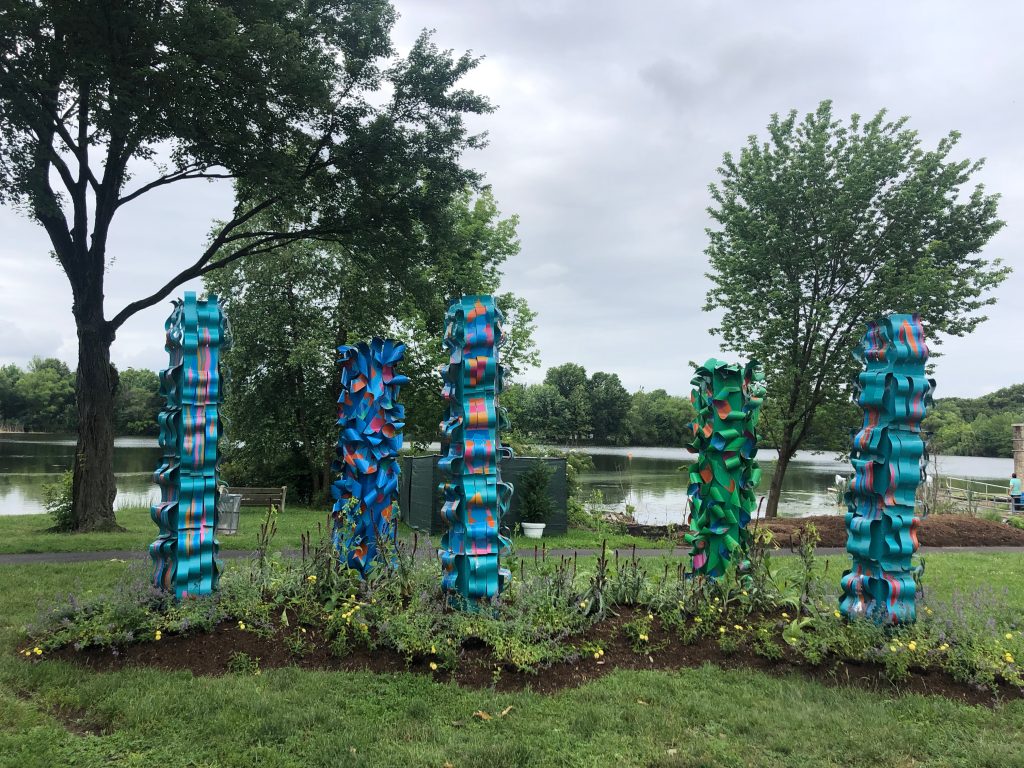 Soon after entering, I saw an old friend, sculpture by Dorothy Gillespie, which I knew from my museum days.

But is it always better? Sometimes not, as waterlogged attendees found out Tuesday, June 8, when thunderstorms forced an evacuation of the site. I was much luckier. The day I attended, Saturday, June 12, was beautiful: clear skies and temps in the 70s. I was also let in early, before the official opening, avoiding the hordes I saw surging toward the entrance as I was departing. 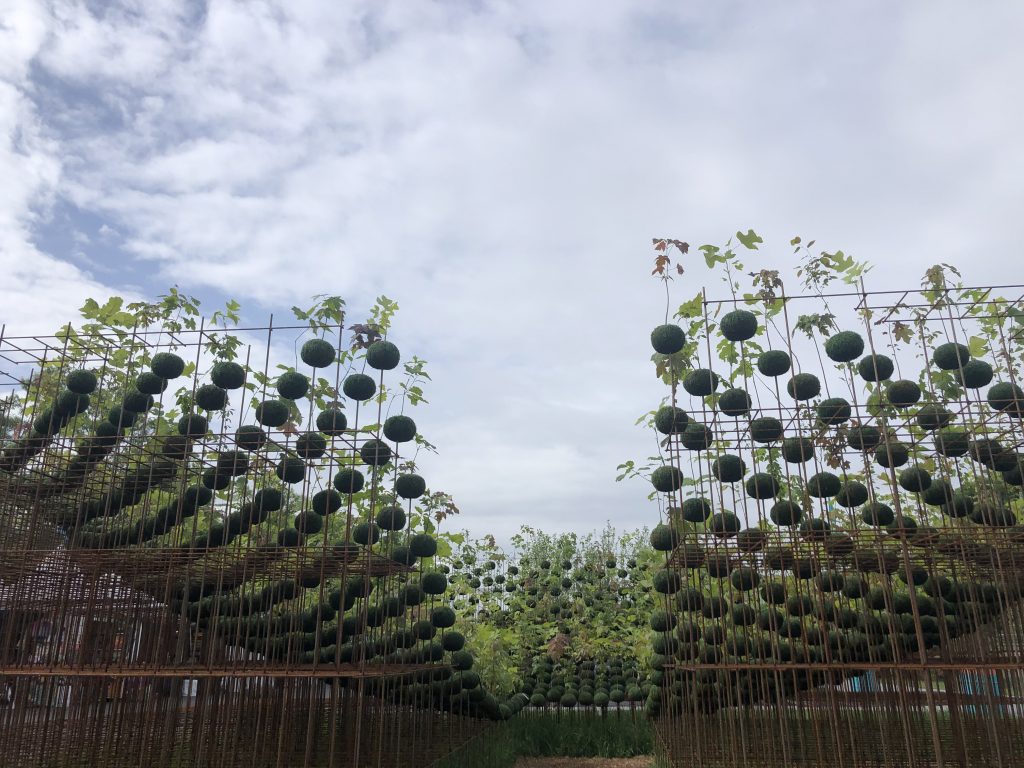 On Saturday, it felt good to be outside, surrounded by bright banners, strolling performers, helpful volunteers, and, of course, flowers. The show was divided into three “districts”—Design, Garden, and Plant—with Design, at the center, the largest. This is where all the installations by designers were, a long green space surrounded by walkways and vendor tents. The installations had to be larger than usual—the outdoor location increased the footprint of the show by nearly fifty percent—but they were not unlike what might be seen at an indoor show. Indeed, some could easily be recreated in March, indoors. I’m thinking of the Kokedama Forest (above) and the Designer’s Habitat (below). I liked the spectacular Forest, the Habitat not quite as well, though it had a certain wit. 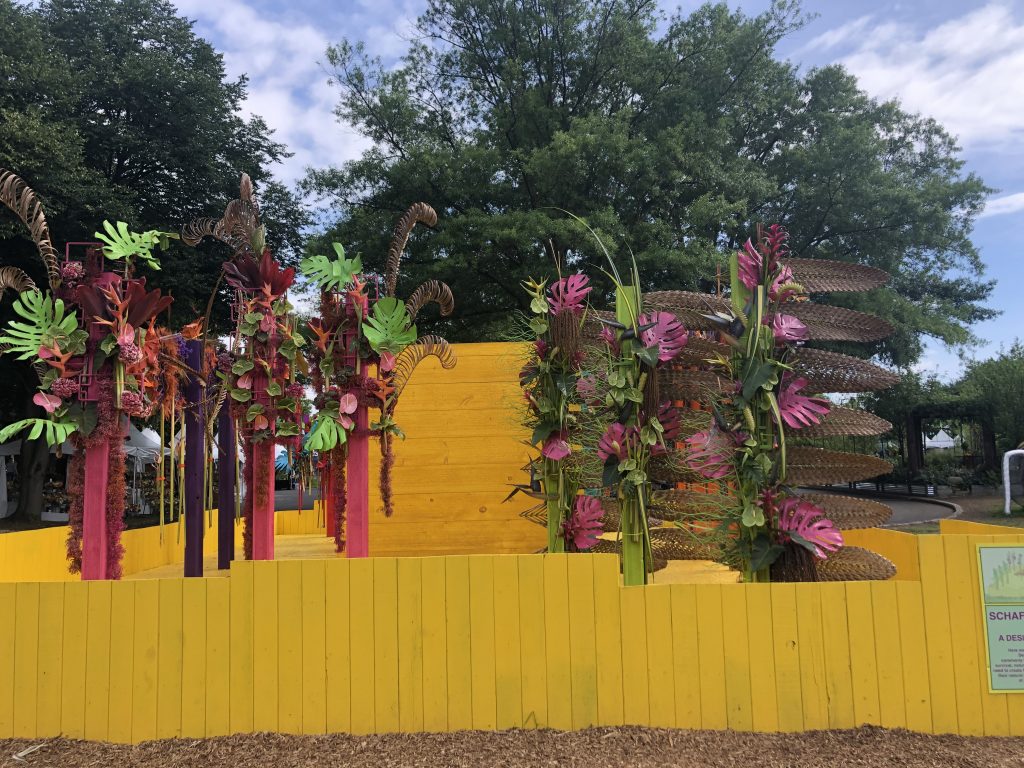 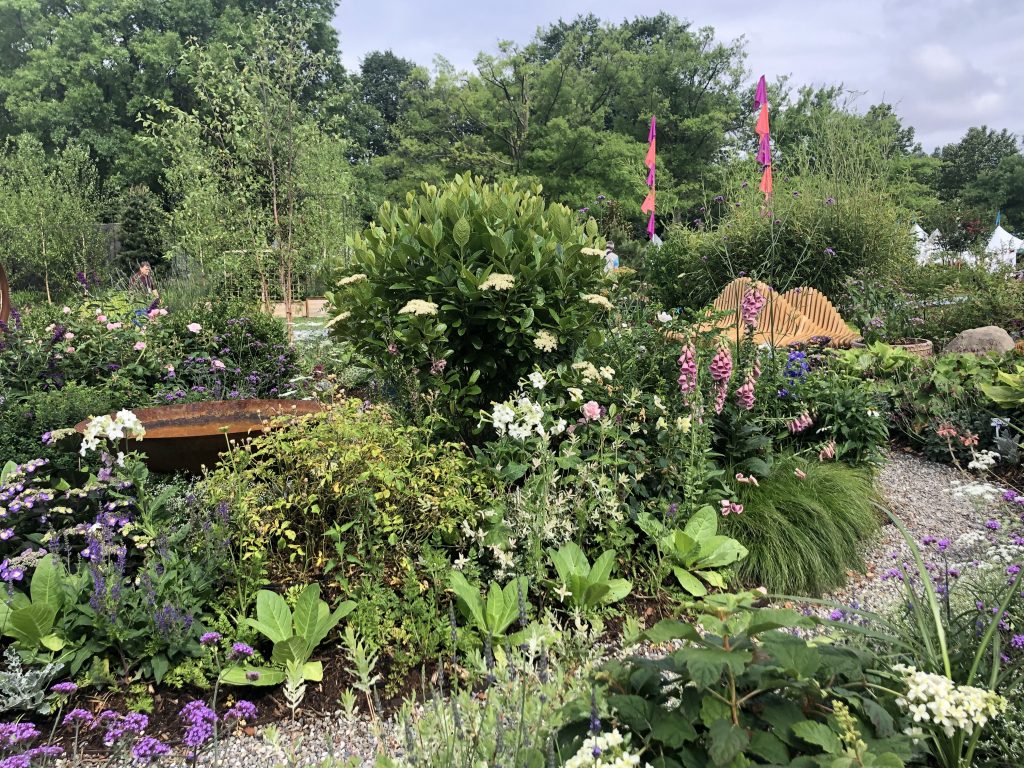 With many installations, however, the June timing and the larger space meant a much larger range of plants, not the usual flowering bulbs and boringly limited shrubs.  Wambui Ippolito’s Etherea (above), which won Best in Show, was filled with lush grasses, shrubs, roses, and perennials (foxglove, phlox, salvia, verbena bonariensis). She says she wanted to make something people could recreate for themselves, and—maybe aside from the artful Cor-Ten steel and wooden hardscape elements—it could be. And should be: it is lovely. 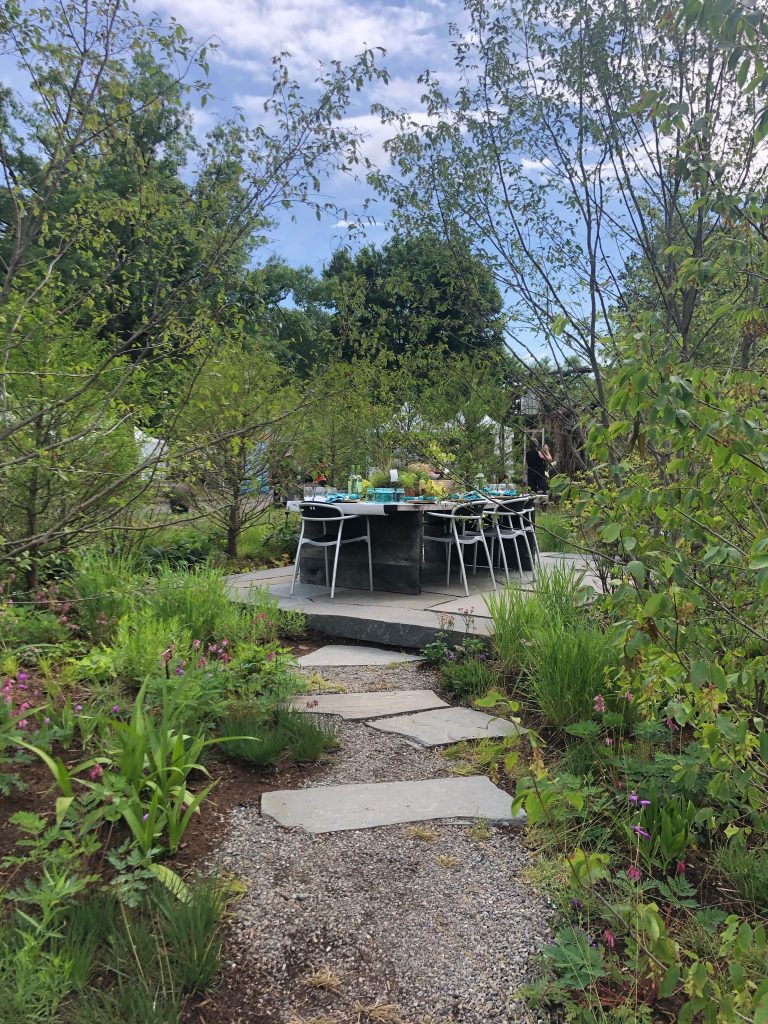 Several installations featured seated areas protected and surrounded by greenery of all types; they deliberately invoked the idea of serenity and safety in the middle of a protective wilderness. Many others evoked healthy habitats for all creatures, a long-running theme throughout the green industry, so long-running that it is now seldom omitted from any flower show entry. 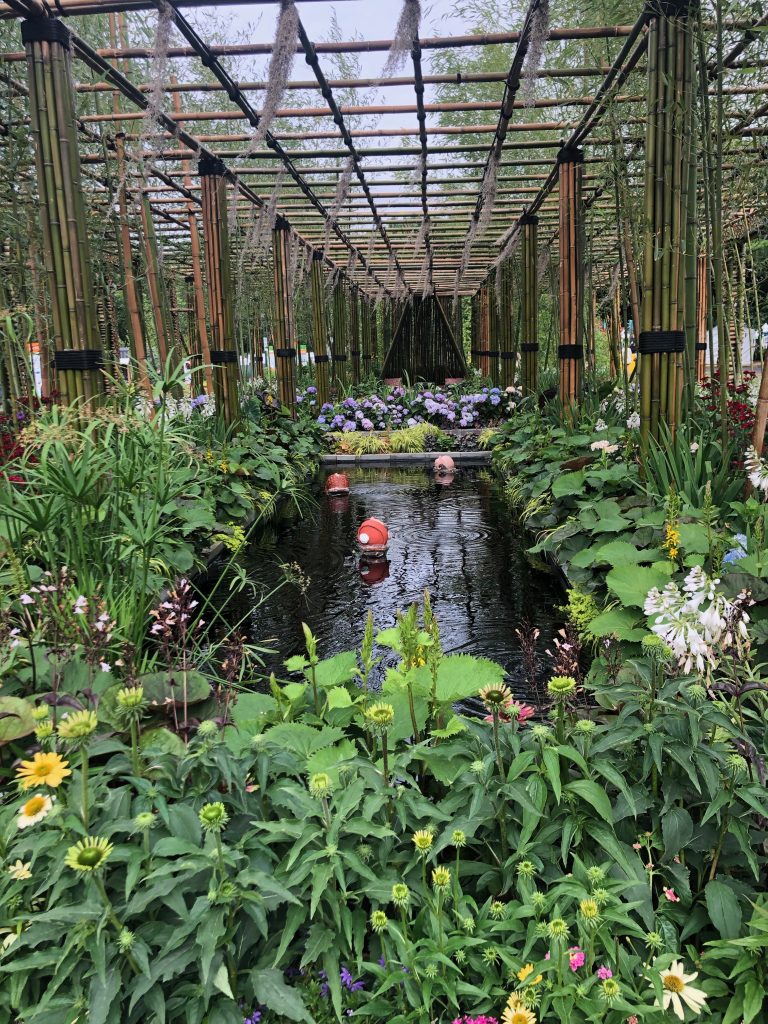 I was glad to leave the largest indoor element of the show, the loudly ventilated  Horticourt, though it did include some lovely displays, especially those framed by windows. And it was much more difficult to get good photos, as is always the case with artificially lit flora, unless you’re a pro with professional equipment. 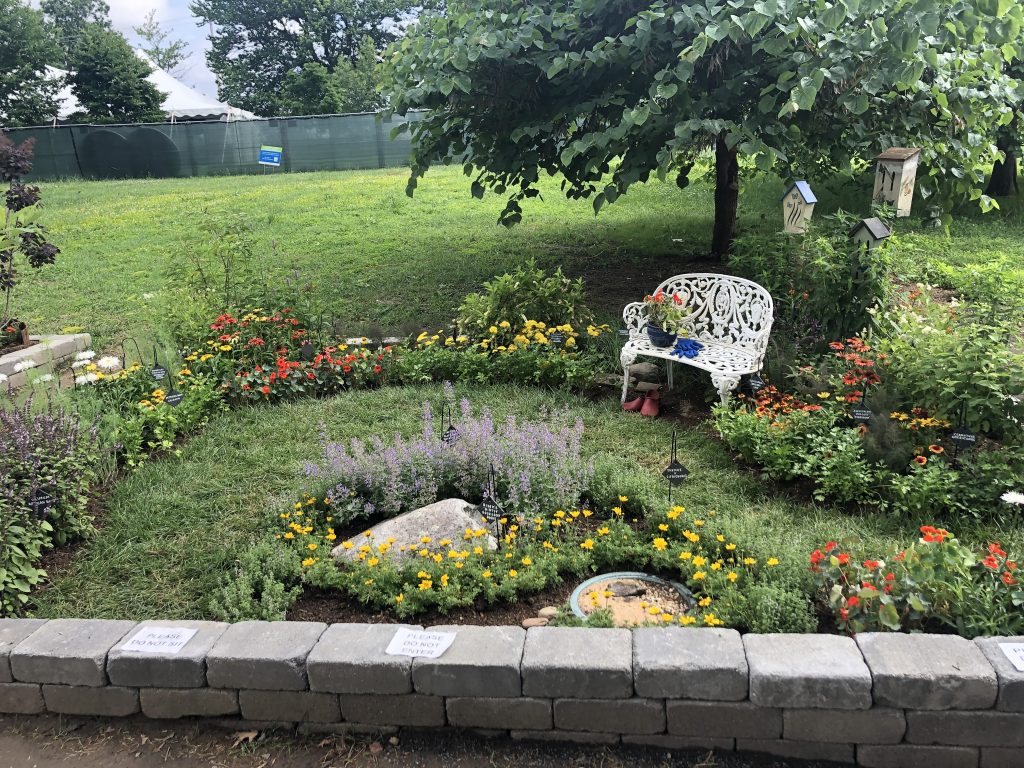 The Garden section included some charming displays from area garden clubs and college/high school students, while the Plant District had some societies and plant vendors, with, of course, more of a selection than you’d have in March. And everywhere there were inviting spots to sit down and have a drink or a snack. I’m thinking that the PHS store had more space than usual, but here’s where I have to confess that I’ve never seen the indoor show and can’t compare. 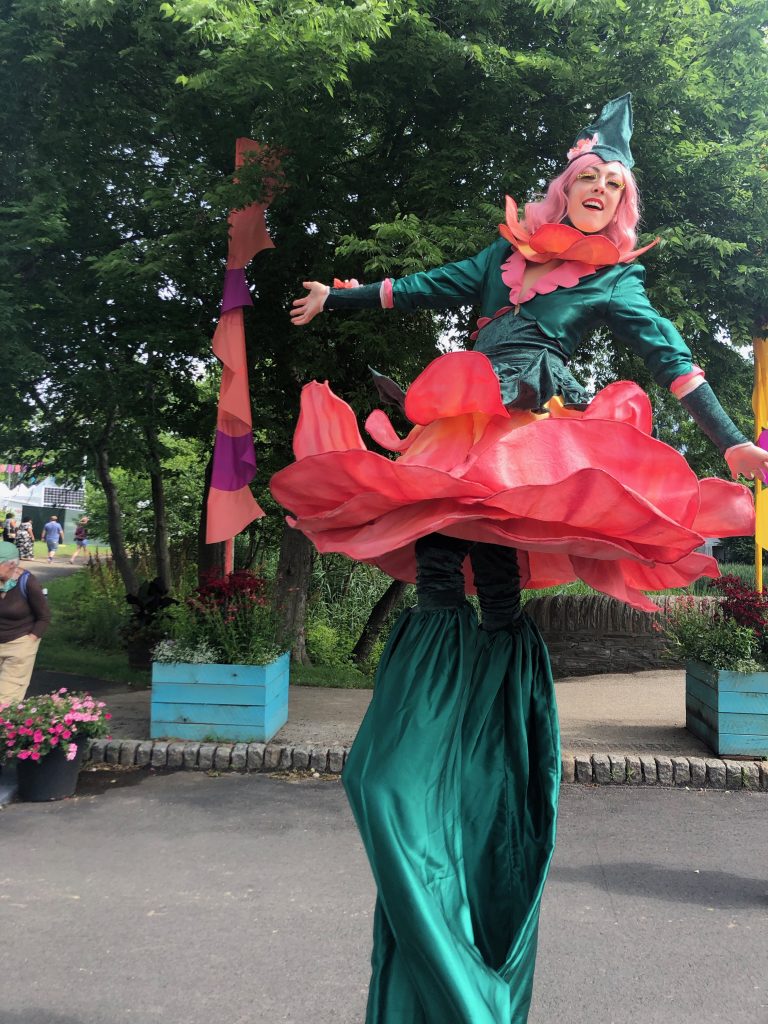 All I know is, it felt good to be outside.

UPDATE: News from the PHS

After writing this, I spoke with Sam Lemheney, Pennsylvania Horticultural Society’s Chief of Shows, to get some observations on the success of the show. He notes that the PHS planned for lower attendance, with COVID not yet out of the picture, but adds that the attendance was better than the PHS had hoped. Here are some of my questions:

How did you use all the extra space? What took most of it?
A lot of increased space was for walkways so people could social distance. We also had more exhibits. We had about 60-70, with 20 new designers. It was great to be able to use an asymmetrical site—we’re used to the convention center rectangle. Obviously there are things we need to work on, but we got rave reviews. We missed the big bus trips and look forward to having those back next year.

Did weather cooperate, on the whole? There was some rain.
We had one day when we had to close the show due to lightning; we had a little bit on the second Friday but it was just drizzle. People came prepared.

What about next year?
The original goal was to do one show outside to get through COVID and we’d go back inside, but we haven’t necessarily made the full decision. We’ll be having some long conversations. We will definitely go back inside eventually.

And there was a request for more pictures, so here they are! 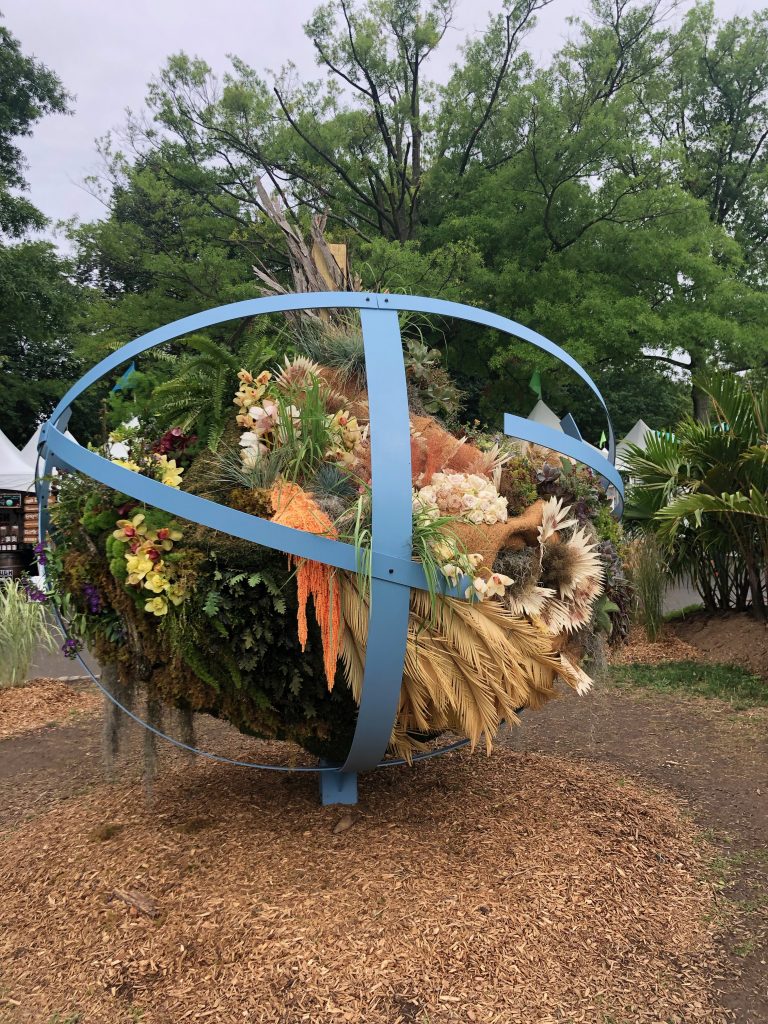 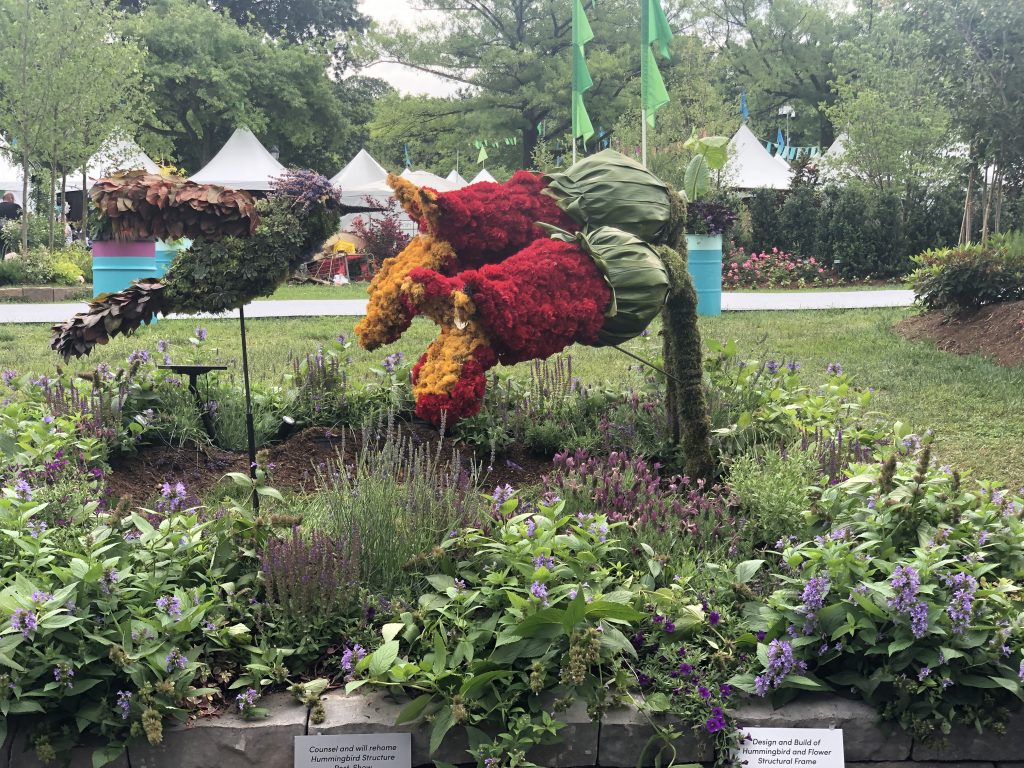 Polycarp Flower’s Plight of the Hummingbird 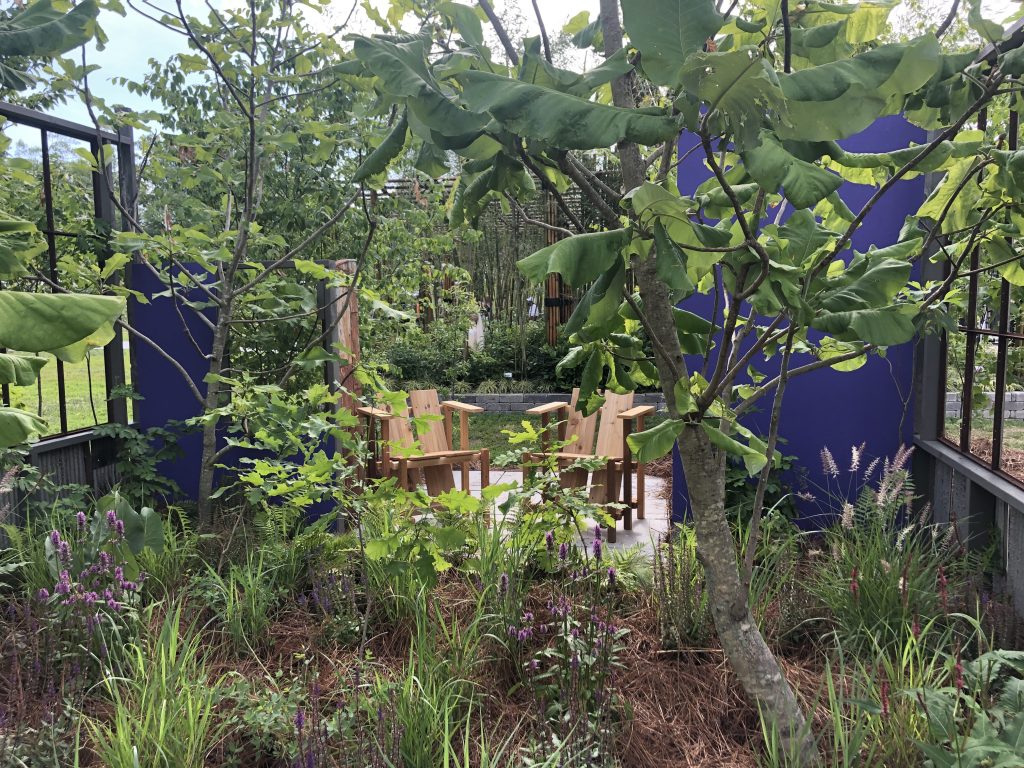