I hate it when a website wants to know my birthday. Nothing like scrolling and scrolling and scrolling through all those years I can barely remember to remind me that I am–in gardening terms–beyond rejuvenation and probably in need of removal. Yesterday, I found that it is just as appalling to divvy up my age in multiples of 17 to count off all the Brood Ten cicada outbreaks I’ve survived. Those ages were 61 with this brood, and previously ages 44, 27, and 10.

I remember all of them as markers for different stages in my life. My first exposure to cicadas was in 1970 and I was just a kid. Bright, curious, and ignorant of most of the vices, I was still somehow happy and optimistic and then suddenly, for no real reason, a million billion big, dumb bugs just came out of the earth. We chased them with badminton rackets, dogs wolfed them down, sisters screamed, it was pure fun. Back then we called them locusts. Through the hard work of entomologists and helpful television weather reporters, we’ve progressed on that front. I have not heard the word “locust” used even once this time around. 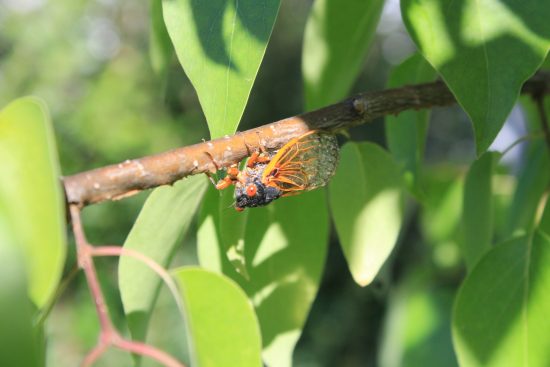 Who me? Just laying eggs. Why? 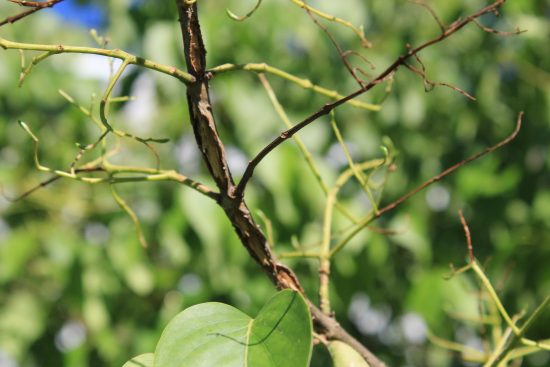 This time around, I’m weathered. And, somehow, both more stoic and bitter. While I want to occasionally chase a cicada with a badminton racket, I can no longer stomach the wanton, albeit cheap, taking of life. So I absorb the frustration of cicadas flying into my face, the never ending sound of their rasp, and the damage to my favorite trees down deep in my gut. And then I take a Nexium capsule every night. 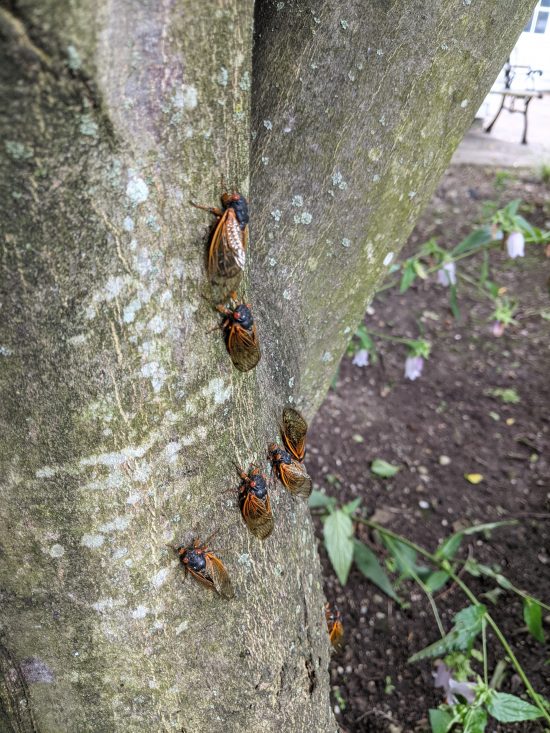 And then there’s this. Despite my earnest and repeated protestations, my wife was determined to eat one. She was then enabled in this pursuit by a former friend, and now I no longer want to kiss her. It is amazing how bad my ability to aim a kiss has gotten since that evening. Whenever she gets it in her head to come kiss me, I always seem to miss her mouth. My lips wind up on a cheek, an eye, her forehead, an elbow. Anything besides the mouth.

At the end of that clip, by the way, Michele says, “Bucket list achieved.” It has been my experience that when a spouse has such simple dreams, it makes it pretty easy to stay married.

Anyway, in case you haven’t figured it out by now, this won’t be one of those cutesy, fawning posts that all the shiny, happy cool kids seem to be writing on Facebook and in blogs all over the Western world. And don’t expect any facts either–just observations. My observations, and, yes, I fully admit that I’m nothing more than a very tired and intellectually lazy horticulturist who is living under a dome of cicadas for the fourth time. 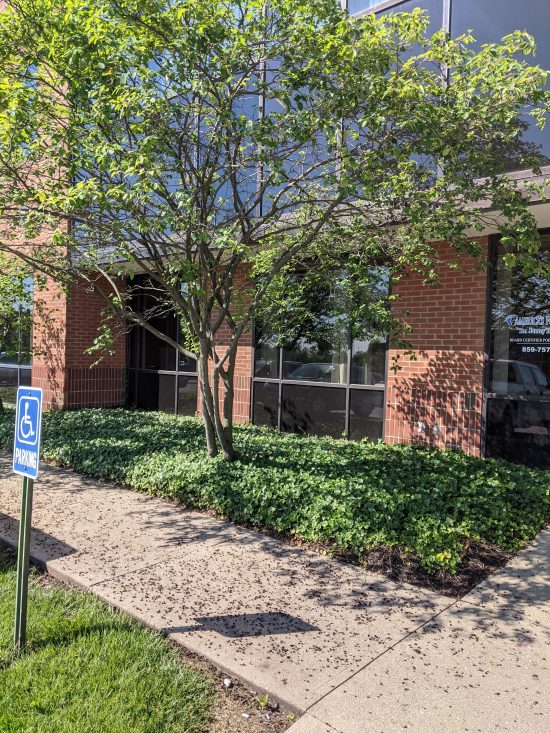 One silver lining, the birds are so distracted by the cicadas, serviceberries and cherries are left for the taking.

And I just have to say—in my defense—that you are just not going to write a cutesy, fawning ode to cicadas if you ever run a string-trimmer or blower, both of which I did the other day. Truth is, to a nubile, female cicada, the sound of a 2-cycle motor can only come from the best-looking, most virile, captain-of-the-football-team, male cicada. One who got into med school and is also a bad boy. And having only days in which to go about procreating an entire massive next generation, they have no compunction about chasing you down the street like you’re George or John or even one of the other Beatles. 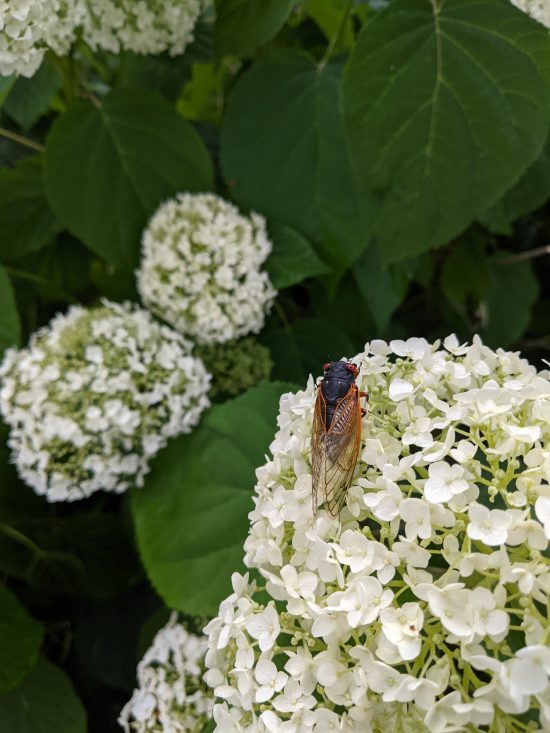 Speaking of cicadas attracted to loud sounds, during the last brood I worked at the airport, and I can vouch for another truth. If the roar of a 2-cycle motor can fool a female cicada into thinking she is in the presence of the best-looking, most virile, captain-of-the-football-team, med school, bad boy, favorite Beatle, male cicada, then I don’t even know how to describe what the sound of a jet’s auxiliary power unit represents. Just use your imagination, and let it run wild, as you visualize what the back end of a parked airplane is like during a cicada year. I’ll just add that it’s really only a matter of time before something that looks like Mommy was a cicada and Daddy was a 747 emerges from one of these broods.

And even if you’re not teasing their women by making loud, roaring irresistible noises, even if you’re simply sitting on your lawn chair trying to convince yourself that the oscillating, ear-splitting din has a certain charm while enjoying a cold beer, there is no guarantee they’ll leave you alone. You might not experience the novelty of having four of them land on your face in less than 30-seconds, but there will be multiple times when you spot one bearing down on you from 30 yards away. Bearing down on you like the world’s slowest, dumbest guided missile. You do what you can. You get up. You spill your beer. You sidle to the left, head fake to the right, cover you head and duck, but it does no good. That damned bug is locked on and somehow still lands on your chest even as you fall backward over the cooler. 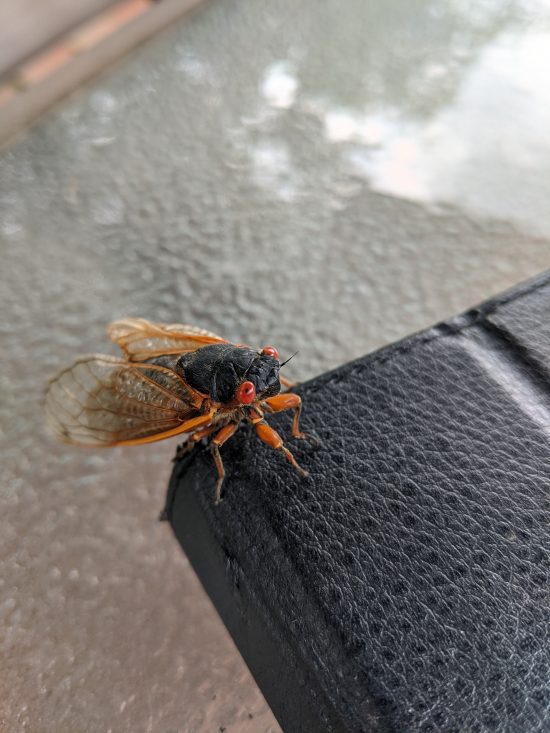 A face only a mother could love. Too bad she’s been dead for 17 years.

Last week, the news reported that one wound up in a guy’s car and caused a wreck, but I’m skeptical. More likely, the guy wrecked, threw the beer cans out, a cicada flew in, and, boom, an iron clad alibi was born.

At this point, thankfully, the brood is on the backside of the curve. Of course, this now means a million billion cicada dead bodies are raining down from the sky. Anywhere and everywhere.  No place is safe. The shoes you left on the porch have dead cicadas in them. The pool skimmer is filled with them along with that one who is still alive and has the nerve to startle you with its rasp as you inadvertently save its life. You find one in your briefcase. Four or five are in your bed. And the whole world smells faintly like your Uncle’s house that summer his wife went missing. 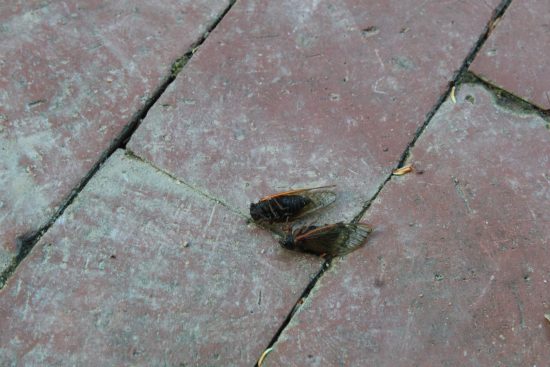 Died in each other’s arms!

I’m looking forward to when they’re again out of sight and out of mind for another 17 years.  And, by the way, I’ve done the math. If it was sobering counting cicada broods backwards, it’s even worse looking ahead. When a million billion of the current generation’s offspring make their appearance, I’ll be right at the age where the average American male drops dead. With that in perspective, despite all the noise, car crashes, and the panic that ensues when a big bug is felt crawling around under one’s shirt, all I can say is I hope I live to see them. And, bargaining a little here with God, if I do, I’ll even consider writing a cutesy, fawning ode to the little bastards.