I Traded My Greenhouse for a Water Jug 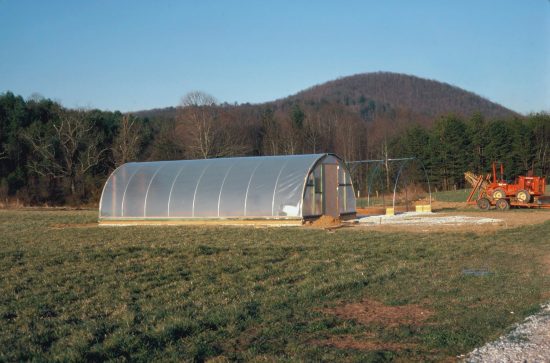 Garden Rant frowns on How-To stories, but I’m making an exception and a confession.

I started gardening as a little boy and was passionate and curious. I stumbled along and graduated, eventually, to a commercial, heated greenhouse.

I later gave up the greenhouse and swore I’d never have another.

But something got hold of me this year. I got the itch to start seedlings indoors again. I chose plastic water jugs over a greenhouse or grow lights.

I am a seed-sowing recidivist. 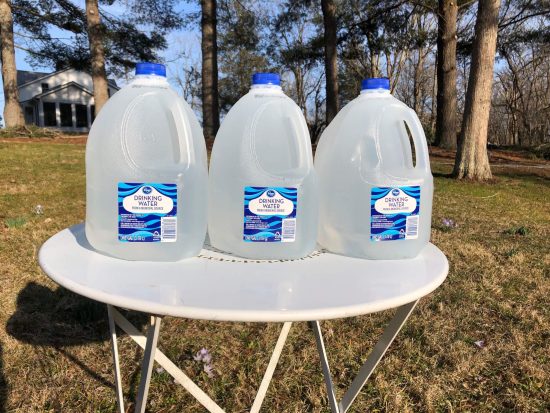 I wanted to get a head start on tomato seedlings.

I sowed six jugs with five varieties of tomatoes and also included a few annual flowers.

This was the easy part.

You need to pay attention to temperature and moisture all day—every day—whether you dream of having a greenhouse or water jugs full of thriving seedlings.

I built a small 14’ x 32’ heated hoop house in early 1980 when I began Holbrook Farm and Nursery in Fletcher, North Carolina. The purpose of the little greenhouse was to start perennial seedlings and propagate cuttings under mist. The idea seemed simple. 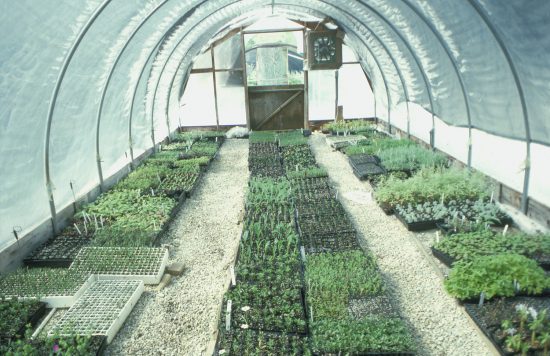 Seedlings and cuttings in the 1980s

Little Did I Know…

I soon discovered, as my wise neighbor Paul McKinney had warned: “You will need to trade your bed for a lantern.” He was right. Maintaining a heated greenhouse is like tending a baby. Both need constant care. Heaters go out in the middle of the night; babies need to be fed and diapered.

I closed the nursery 15 years later. I loved the greenhouse and the nursery, but the work was killing me, and yet there was a happy ending.

My sweet, little greenhouse found a new home and has been showered with love ever since. 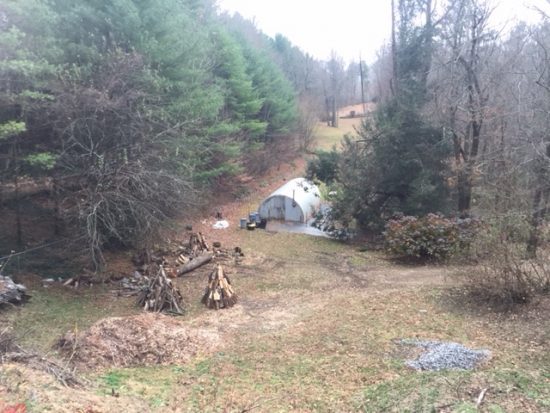 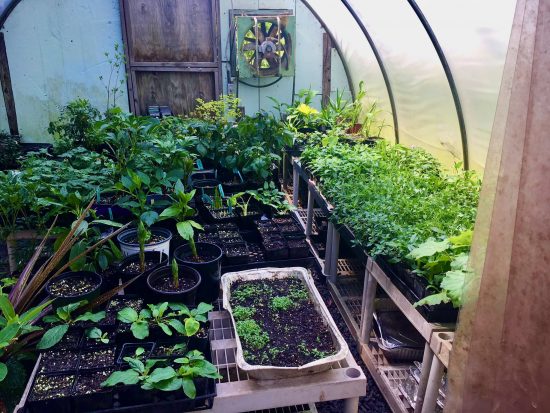 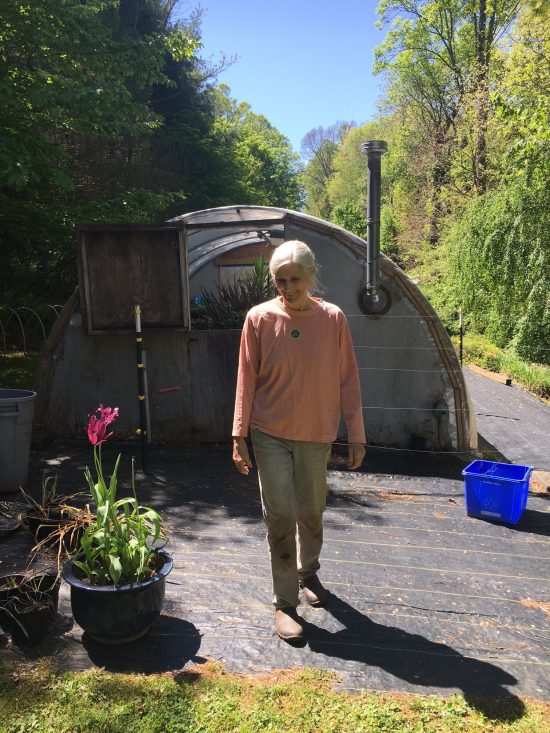 Rose worried.  “Wouldn’t you like to have another small greenhouse someday?”

I wisely chose a happy marriage over a second greenhouse mistress. I remained resolute and devoted for 26 years.

And then, this February, a month where spring’s future is determined by a groundhog and seed embryo dominatrices, arrived like in no other year past.

I am still happily married, but my mind began straying toward grow lights in lieu of a greenhouse.  Rose and I were still isolated, and there was little to do in late winter besides pore over catalogs during the day, watch Le Bureau at night, and wait our turn for a Covid vaccine.

The big question: Was I willing to stand guard with seedlings, again—every day?

If you want a greenhouse, a cold frame, grow lights or water jugs full of seedlings, be prepared to hitch yourself to the post.

I ordered a set of LED lights in February, but the 7-14-day shipping delay stretched into a month, so I cancelled the order.

“Imagine them as little greenhouses,“ he said.

There were no greenhouse flashbacks.

The seeds popped up in mid-March, like dandelions in a back alley, a week after sowing. 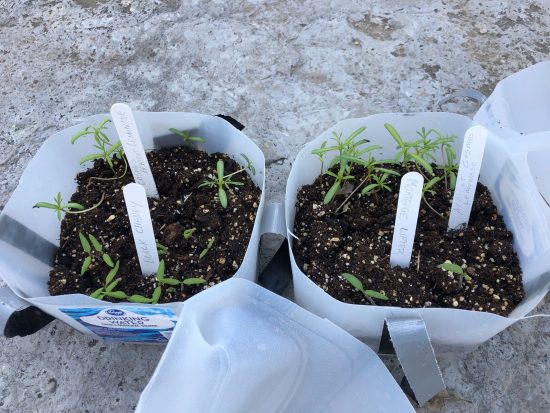 Rose and I coddled our babies. We closed the milk jugs when it was chilly and moved them inside when it was freezing.  We even strapped our little farm into the backseat when we went to stay in Louisville. This gave our neighbors—real farmers—something to talk about.

The tomatoes were set out on April 27th. We’ve been picking lettuce and kale for weeks. Greasy pole beans are going into the ground this week. So are burgundy-leaf okra.

So, what more is there to worry about this growing season in the vegetable garden?

Any garden seems possible in the beginning, but as the last frost date passes, summer’s heat and humidity approach and, with that, the weeds, ticks, chiggers and cicadas start to overwhelm February’s optimism.

Have I taken on too much?

Why did I jumpstart spring this year by growing tomato seedlings in water jugs?  I could sow these seeds directly in the ground in early May and be only a few weeks behind on my first homegrown tomato.

I wondered whether I could re-ignite the magic I first discovered with bean seeds grown in ordinary soil in grade school cafeteria milk cartons.

At heart, I am a perennial lover. I may have started with green beans  in the first grade, but I have watched over perennials for more than 40 years.

I was gifted a lifetime of free perennial seeds from Jelitto Perennial Seeds, in lieu of a gold watch, when I retired a few years ago. (I was the Director of Special Projects for a good chunk of my career.) 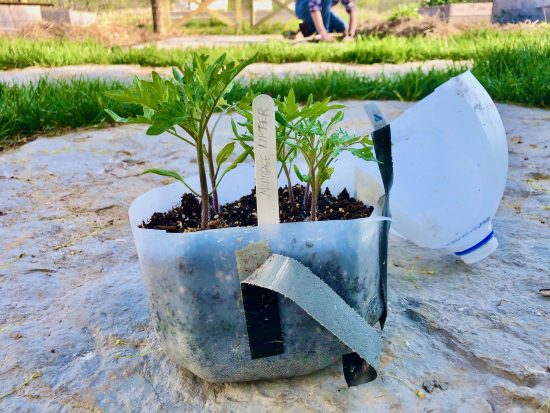 The landscape for locally grown food has changed for the common good in the last 20 years. Farmers’ markets are flourishing.  If you’re lucky this month, you may find vendors selling starter tomato plants of ‘Mortgage Lifter,’ ‘Vinson Watts,’ ‘Tommie Toes,’ ‘Black Cherry’ and ‘Chef’s Choice.’ But no big deal if you can’t. By the time my first tomatoes ripen in early July, there will be an abundance of delicious, heirloom tomatoes and other fresh vegetables in farmers’ markets.

Anne Wareham warned me about veggies in an early February email: “I’m so over growing my own!”

There is only so much time in a day.

We’ll see how this goes.

Check with me later.

I may have plump, prize-winning tomatoes ready for the State Fair in August.