Last weekend a friend and I happened upon a neighborhood yard sale filled with all the stuff my kids will be flogging when my husband and I permanently exit stage left.  My eye was caught by an array of good garden tools lined up against a wall – so we paused our plans, stopped the car and nosed around.  A few minutes later we were in long conversation with the daughter of the couple who had recently died within a year of one another; and twenty minutes later, our hearts felt full. 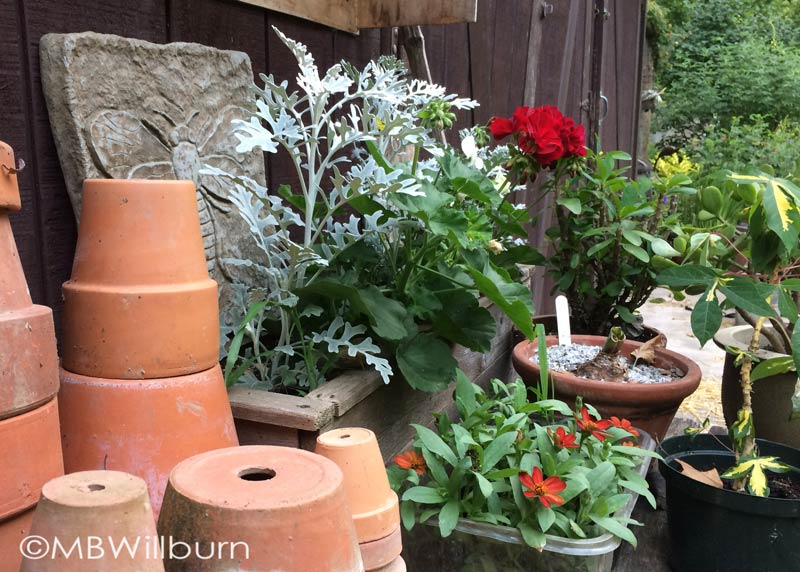 Garden collections – how do they even happen?

Yet theirs was not an extraordinary story. No one would have bought the rights or ghost written the details to create New York Times Best Seller List fodder. It was entirely and beautifully ordinary; and there is no need to share it as I wouldn’t do justice to the simplicity of her expressions, pauses, and laughter as she talked about her parents while standing in the midst of their lives spread out at her feet. 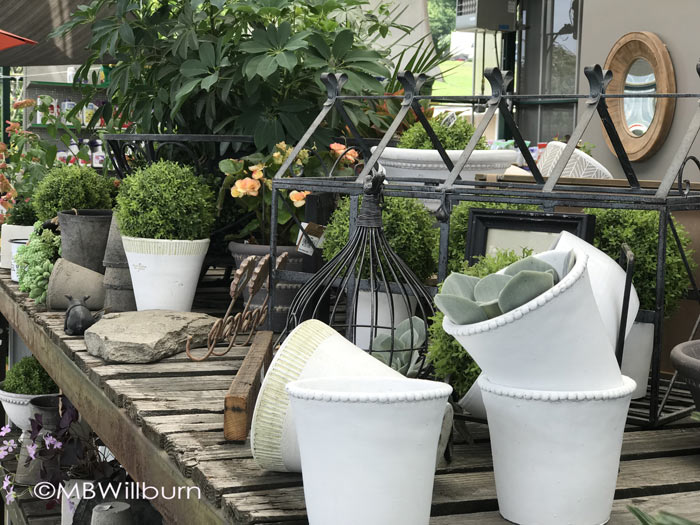 Even the most expensive, curated objects at a garden center eventually become ‘stuff’ within a year of coming home.

I hesitate to start this paragraph with “As a gardener” because I could just as soon start it with “As a woman… As a mother…. As a wife… As a daughter…. As a human being…” All identities suddenly and deeply felt the tenuous, temporary connection that exists between Us and Our Stuff.

But it was the gardener that sustained the gut-punch. Whilst everyone needs plates and silverware and (during a small period in their twenties) shot glasses, very few have use for a good pair of pruners.

And for those of us who garden, so much of what we acquire to create that garden is extremely fragile — occupying a unique spot in our consciousness. Just ours. So much of it looks like junk to other people – the useful bit of wire, the bag of zip-ties, the multi-year tomato cages, the endlessly reused black plastic pots.  I once found an eight-inch piece of cord carefully coiled into an Altoid tin in my father’s glove compartment – his reasons for keeping such a treasure lost to the ether.

The plastic pots that my eyes scanned and rejected at that sale were shoved under a table – no doubt bound for the landfill. How much importance did they have to their owner? Perhaps no more regard than I gave them, but perhaps they were as significant as the ugly pink plastic pot I do not throw away because my mother handed it to me two decades ago filled with pothos – and then waved goodbye to a daughter, son-in-law and baby grandchild bound for a new life 2,748 miles away.  No one will remember that moment or that pot as they are clearing up a cluttered shed and wondering why mom owned a pink pot when she hated the color pink. 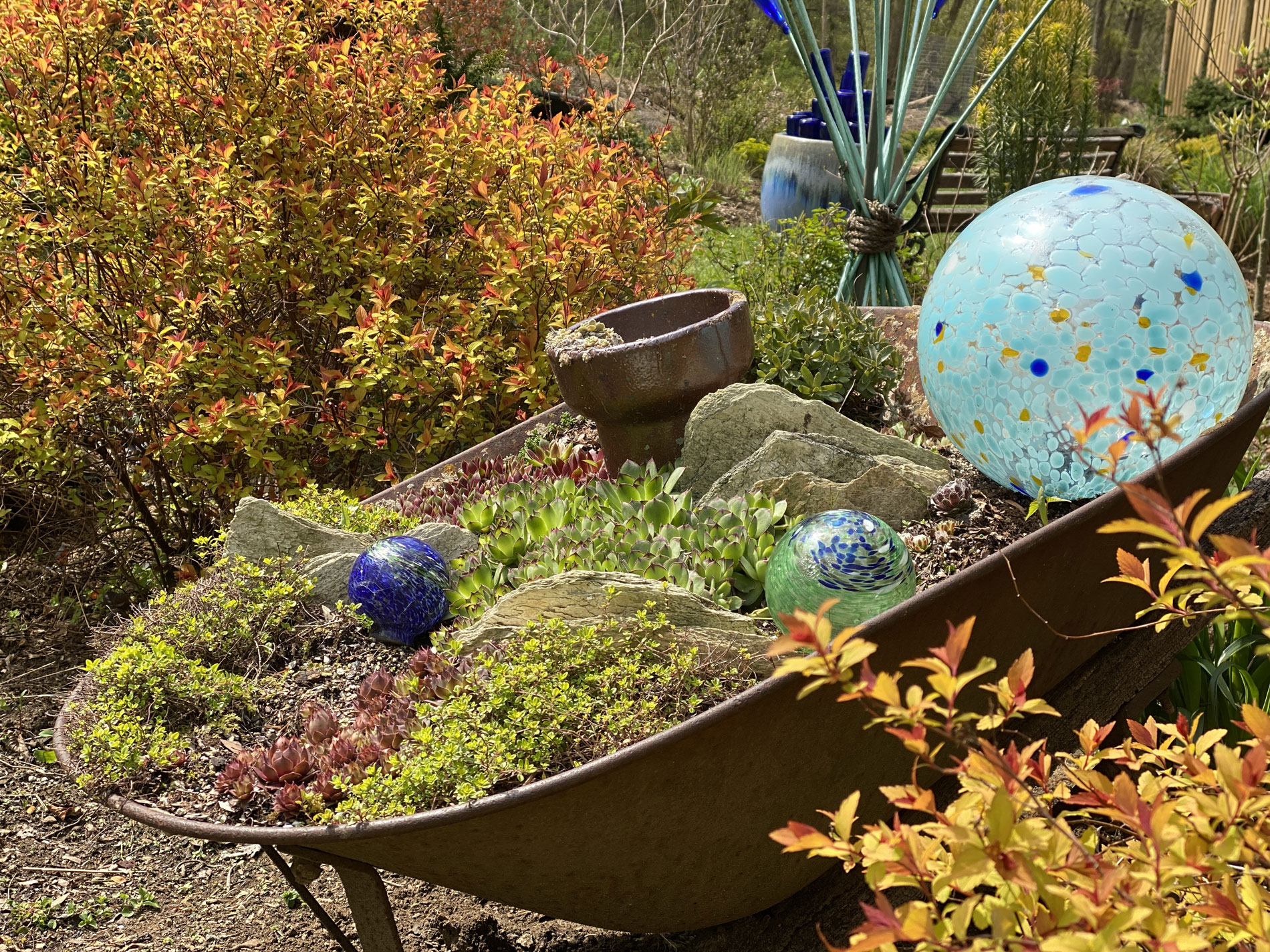 No one will know – or care – that this rusted wheelbarrow was wrestled from behind an apartment complex in Annapolis 15 years ago – discarded by its first (?) owner, treasured by its new one.

Treasures metamorphizing into trash. And that’s not even mentioning the plants to which most normal people would attach no value at all, and if pressed, perhaps describe as “green.”

Only a handful will ask to dig a special plant – most likely for memory’s sake. Probably it will be common. Ironically it will bloom pink.  Will my ghost hover around them I wonder – trying desperately to draw attention to the variegated rohdea and sighing mournfully when they dig the hydrangea instead?

“Did she really devote her life to this?” they will ask my daughter as they offer a dollar for a pot I drove to Baltimore in a rickety truck with no air conditioning in order to source – fragments of a Taco Bell lunch balanced precariously on my lap, the thrill of acquisition across my face.

“You say she was out here every day?” they will say to my son as they sort through thousands of garden books looking for one filled with glossy pictures, ignoring beloved volumes of essays with broken bindings and ex-library stamps.   Will the wisdom of Mitchell, Lawrence, Lloyd and Lacy end up at the thrift store next to eight copies of the 63rd edition of Better Homes and Gardens’ plaid cookbook, or will another young upthrusting gardener ask to take the lot for ten dollars? I can hope.

How important it all is to me, but how little importance it has in the end.  It is connection with friends, family and other human beings that makes this life resonate beyond the tiny parameters one is given to live it. 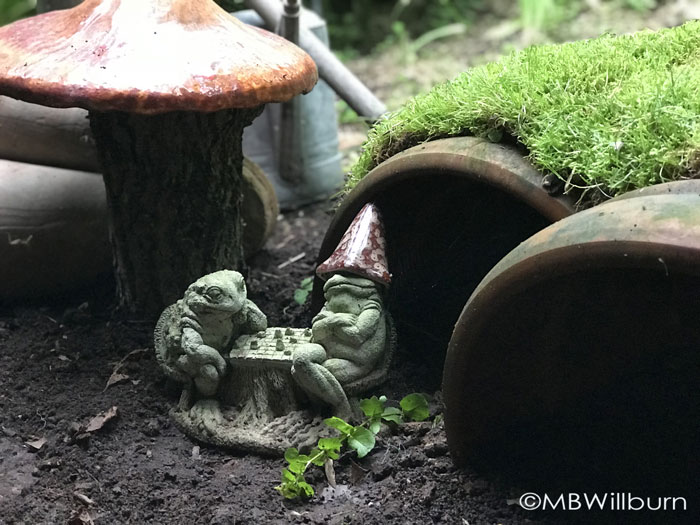 Quite frankly, there are objects that belong at a yard sale.

I drove home on Saturday knowing that it is better to hope that my children disconnect from all these precious things of mine – secure in the connection they had with me. It is better to hope that my daughter will, like the woman I met that day, feel called to share a laugh with a stranger as she relates the story of her very ordinary, curiously obsessed mother, her garden-bemused father, and a childhood marked by plants and indentured servitude.

I hope she laughs right up until that stranger offers her a quarter for a pair of Felcos. I didn’t raise a fool.