At least 15 years ago, I was growing tons of Japanese maples from seed. I had a little nursery setup in the backyard. I was a madman, but I learned a lot. Top among the things I learned was that there is no such thing as a bad Japanese maple. All kinds of leaf colors, shapes, forms. It was a rewarding experience, and I was happy to give away many beautiful small trees to friends and family. Of hundreds, I only wound up keeping two, which I planted in containers. These plants have become for me symbols of resilience. 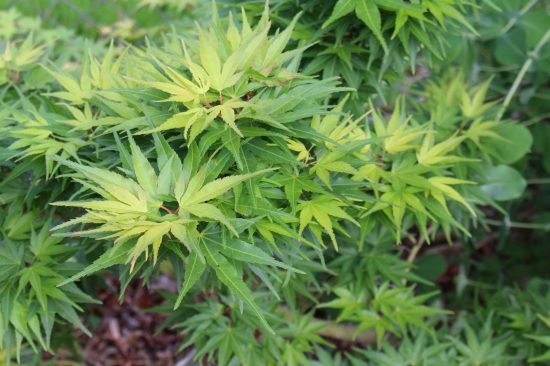 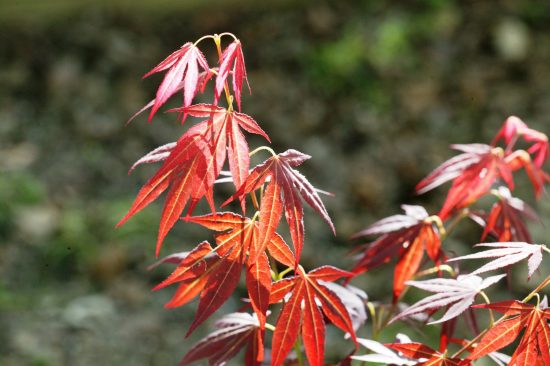 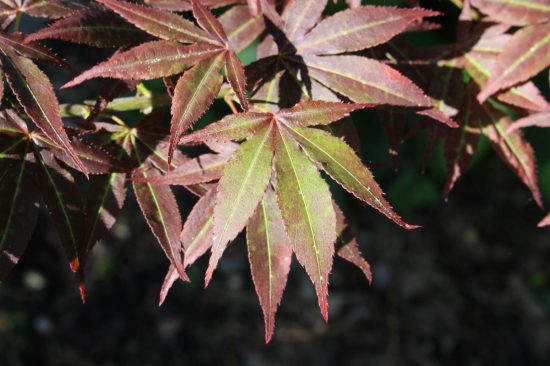 We’ll call the first of these seedlings ‘Lime Jello Vodka Shot.’ This is in keeping with all the most sacred contemporary conventions of plant naming. The other, we’ll call ‘Johnny Bench,’ simply because he was my hero growing up and because it’s a red. 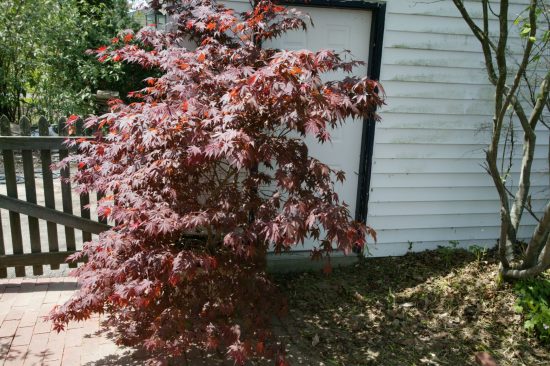 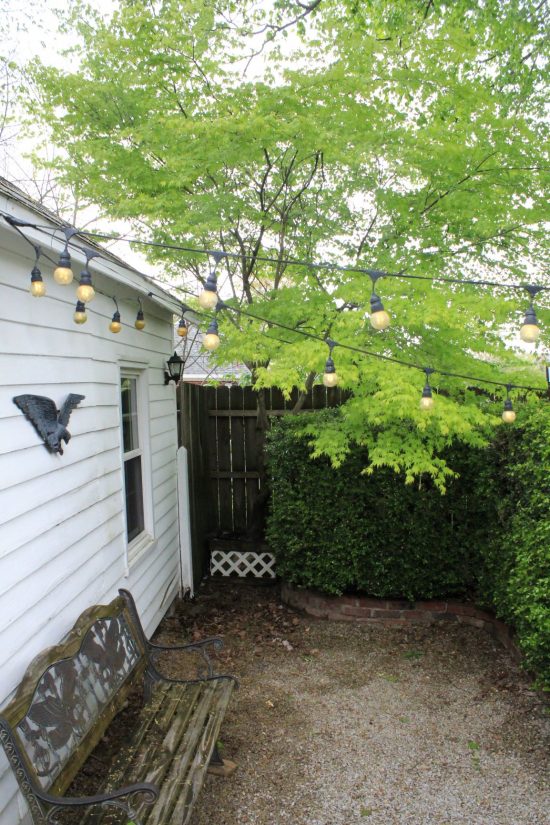 ‘Lime Jello Vodka Shot’ was growing happily in a 3-gallon nursery container when I simply buried the 3-gallon container in some pine fines in a 20-gallon container. I want you to know that I had every intention of coming back later in the season and transplanting it out of the 3-gallon and into the 20, but, as it so often does, life intervened, and I forgot. So it stayed put. In its container inside another container. Set on 8“of gravel. On top of a landscape fabric. On the north side of the house. Under a sugar maple. 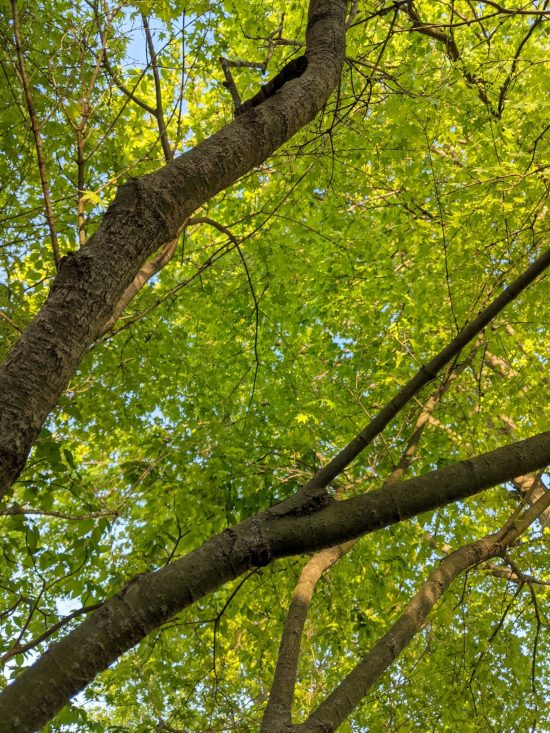 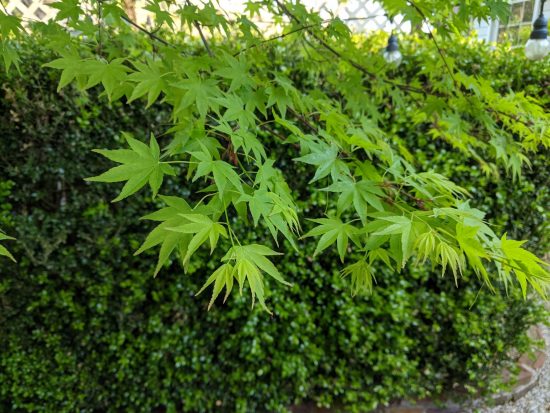 ‘Johnny Bench’s’ fate was a little better. At least it got planted directly into the 20-gallon container which sat on a brick paver pool deck on the north side of the garage. 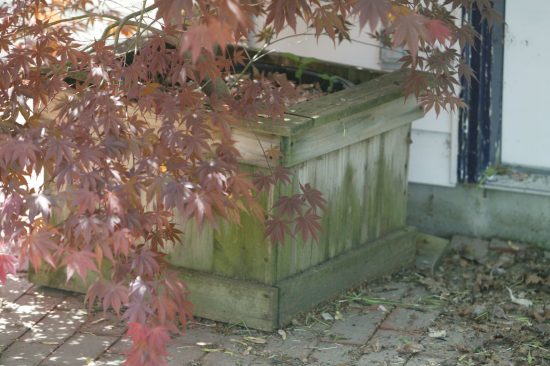 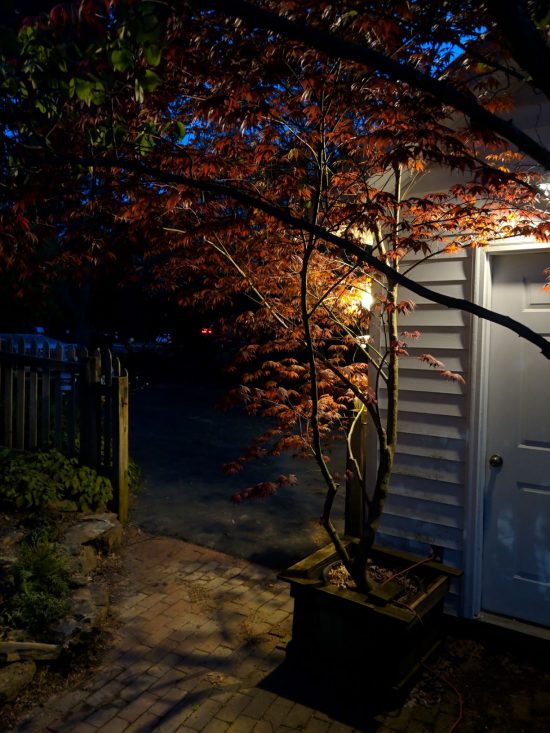 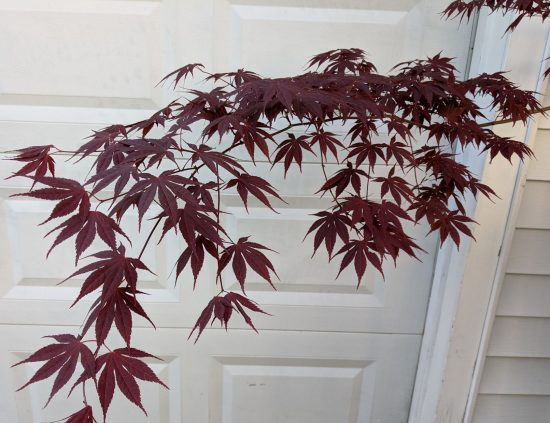 ‘Johnny Bench’s’ lovely red foliage softening the corner of the garage and a gate.

And so both “Johnny Bench’ and ‘Lime Jello Vodka Shot’ stayed where they were. And stayed. And stayed. Totally neglected. And yet growing. Not just growing, but thriving! Over time, I began to wonder things. I wondered about just how gnarly those root balls might be inside those containers—especially for ‘Lime Jello Vodka Shot,’ the one whose roots must be all knotted up inside not just one container pot, but two! I wondered what it looked like under the containers where the roots had obviously punched through the drainage holes and beyond. And I wondered how many and how large those roots might be. Sometimes, I got scared thinking about these things. 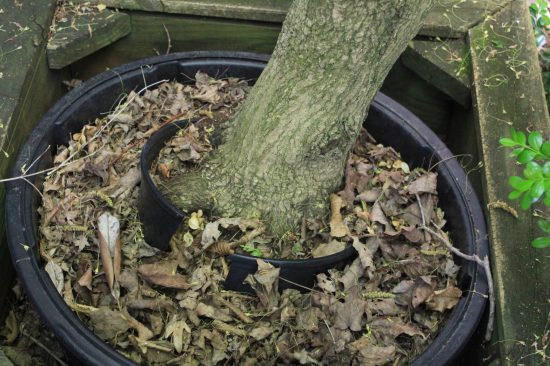 Well, this year I’ve gotten something of a glimpse into these mysteries because of a ditch digging, re-plumbing, self-flagellating project involving a drain, a clog, and a pool with broken pipes. It required that I dig a trench not even a foot off of ‘Johnny Bench’s’ container. I hated to do it, but I had no choice. And, yes, I know how hollow that sounds after all the neglect and abuse I’ve described so far. 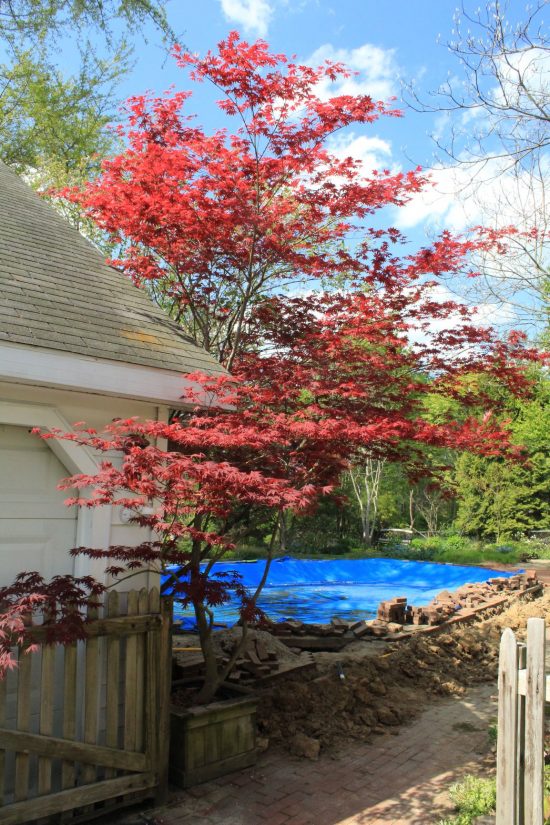 ‘Johnny Bench’ and evidence of my purgatory project.

It probably surprises no one, but I wound up cutting through two 3″ thick roots and a slew of smaller ones. I suppose these roots slipped out of the container through drainage holes and gradually expanded, splitting the plastic. I have no idea how they drove their way through the brick pavers and into the ground below. 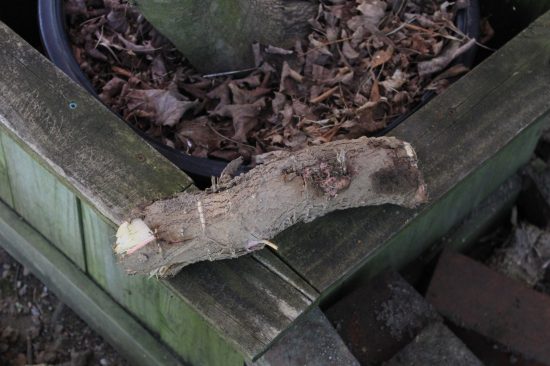 I’ve been thinking for a while that sooner or later these trees will inevitably decline and die, and, when that happens, I’ll put on a white lab coat and launch into a tree autopsy. But they just kept chugging along. In fact, they look for all the world better and more vigorous than other Japanese maples on the property that live in good soil and enjoy humane care. But now that I’ve hacked through some of ‘Johnny Bench’s’ roots, maybe I’ve hastened its doom. Still, I half expect that it will outlive me. 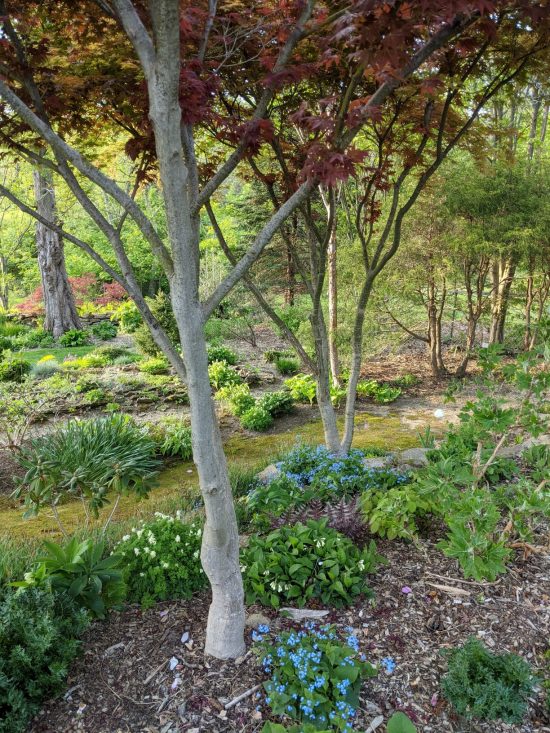 Two Japanese maples growing in good conditions that are treated with love and respect, and, yet, are not growing as well as ‘Johnny Bench’ and ‘Lime Jello Vodka Shot.’ They really should be ashamed.

In summation, I don’t know what any of this means. I don’t know that anyone has even learned anything here. Should we grow all Japanese maples like this? I don’t think that’s wise, but it should be noted that these trees have doubled the life expectancy of the average downtown street tree. Maybe we should try growing daphnes like this? Yes. I agree with this. I’m not saying that they’ll survive it, because they won’t. They don’t survive anything. However, for a genus that has caused me so much suffering, I wouldn’t mind returning the favor a little. But, in the end, I think the only message here is how much life wants to live, what a miracle it is, and how amazing it is to observe and to be a part of.

By the way, my PSA count was undetectable this morning. That makes five years cancer free. Resilience.