To help celebrate GardenRant’s 15th anniversary this year, I’ve pulled together the story of how it started, how it continued through changes in life circumstances and technical crises, and how it’s changed my own life. 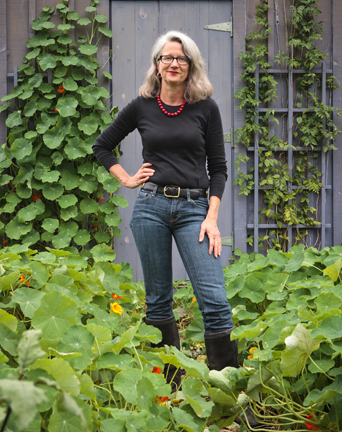 Michele Owens – fit, classy, and boy can she write.

Gardenblogging noticeably debuted in about 2005, with a dozen or so of us across the country posting and reading/commenting on each others’ blogs.  It was fun. Google Reader (RIP) made it easy to follow other blogs, so we did.

One of those readers was Michele Owens, a professional speechwriter and rabid vegetable gardener in Saratoga Springs, NY, who started her blog “The Sign of the Shovel” as a way of getting some garden-writing gigs. She got the idea of teaming up with other bloggers so there could be lots of posts without her having to write them all – she worked full time, was raising three kids, and was doing lots of gardening, after all. 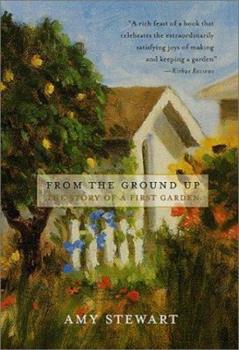 Michele had been following “Dig,” the blog by Amy Stewart in Eureka, California, and had loved Amy’s gardening book From the Ground Up. So she reached out and Amy signed on.

Their goal was to “uproot the gardening world” by writing honestly, even critically, about gardens, gardening products, gardening shows on TV, government actions affecting the health of our gardens – anything but the boring how-to articles they saw everywhere.

Next, they noticed my blog, which I too-modestly and too-locally named “Takoma Gardener” after my town in Maryland. What caught their attention was my first big rant – about “America’s Master Gardener” Jerry Baker, whom I called a rich quack. (We  republished it here.)

So I joined the scheming twosome, feeling a bit out of my league with professional writers, as I’d never written before starting my little gardenblog – unless you count a garden club newsletter, which I don’t.

We came up with a name and tagline – so cheeky! – and paid a design firm in Costa Rica $500 for a logo we loved at first glance.

GardenRant Launched in July of 2006 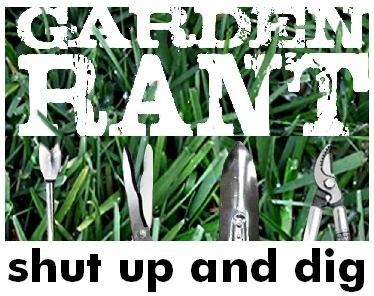 We launched our little adventure on the now-dormant Typepad blog service, which was cheap and easy. Within a couple of months we’d found our fourth – Elizabeth Licata in Buffalo, whose blog “Gardening While Intoxicated” got our attention, as did her activism for Garden Walk Buffalo. Elizabeth is editor of the regional magazine Buffalo Spree, so now we were three professionals and me.

(I was so insecure at first, I proposed that we not display our archives on the site – in hopes that my posts would soon be forgotten, I guess. Thankfully I was voted down.)

It was an exciting period for us, as GardenRant became known in the admittedly small world of garden communicators. We won early garden-blog awards, like Overall Best and Best Writing. And we helped boost traffic by publishing over 60 posts a month. (Don’t anyone expect us to be that productive again.) 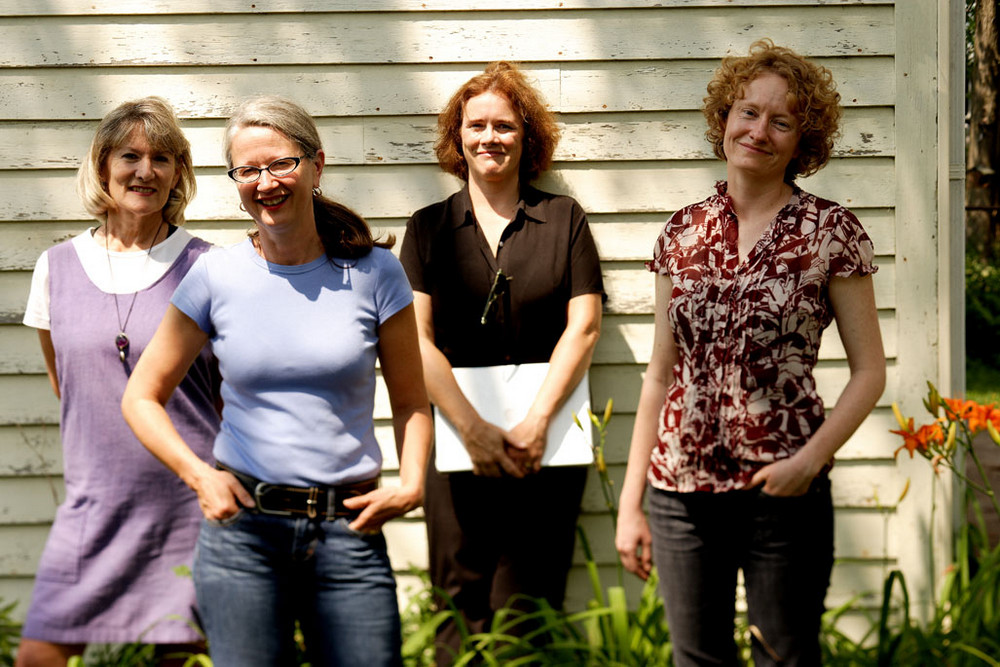 The “Feisty Foursome” in Buffalo. Photo by KC Kratt.

We met in person for the first time in the summer of 2007, where we gathered to experience and help promote Buffalo’s Garden Walk. There we had some group photos made by KC Kratt, including this one that ran in the Washington Post. From left are me, Michele Owens, Elizabeth Licata and Amy Stewart. 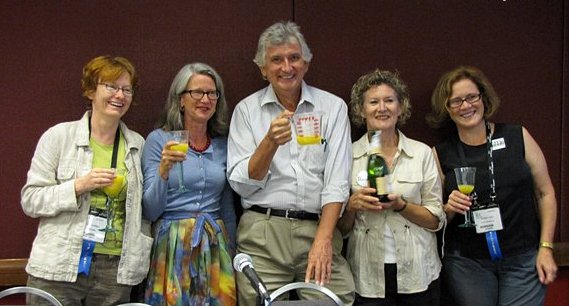 And we saw each other again in 2010 in Chicago where we’d been invited to speak to gardening businesses at the Independent Garden Center Show. In this photo we’re holding mimosas that Mike Nowak presented to us during our talk. Yes, during. Mike’s a lot of fun.

For the first six years of GardenRant it was just what Adrian Higgins called the “Feisty Foursome” and our guests, until the inevitable happened. Amy left to write books and Michele left when demands on her time got even crazier. Happy to report Michele did get some nice garden-writing gigs – especially her book and big assignment for Oprah Magazine.

But we gained this great group of new voices. who all wrote regularly on the Rant for several years.  From left:

Looks like we’d gone from the original gardeners with opinions to plant people with degrees – and opinions.

Thanks to our Dozens of Guests

Something I’ve loved about writing for GardenRant is having access to all my favorite garden writers, many of whom I’ve gotten to know a bit. We invited them to be guest ranters when they had something to say, which they did in droves. Here are just some of them – the ones whose names our readers probably recognized:

There were many more whose names were probably unfamiliar, people we were happy to introduce our readers to. GardenRant has always been pro-garden writer, offering guests this space, and saving our criticisms for more impactful players in the gardening world – like Scotts Miracle-Gro, Big Box stores, pesticide companies, and garden programming on TV. We aim to punch up. 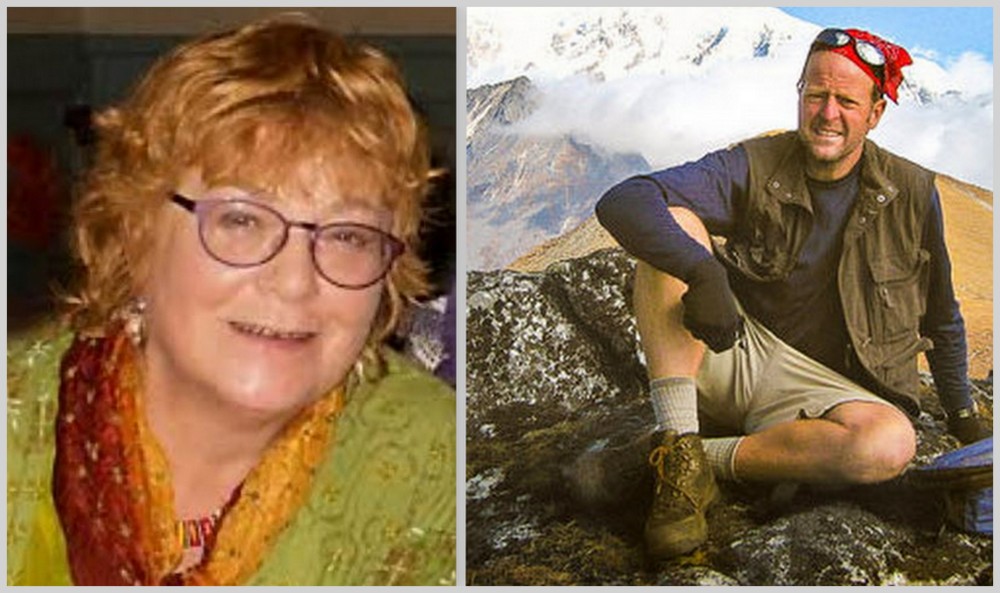 Last fall we decided to invigorate our content and also fix a problem – that we were now all located in the eastern half of the U.S. So we looked far afield and came up with our ideal new partners and found them in the Pacific Northwest and Wales. We invited them and they said yes!

Behind the scenes, GardenRant’s income, though always modest, had covered expenses plus a bit extra until Blogads, the ad service we used, went out of business. So we’d been supporting the blog out of pocket for some time when last year we qualified as a client for Mediavine, the firm that automatically installs the ads we all have to scroll through as we read our articles.  Nobody likes them, but to me they’re not as annoying as ads on TV, videos or radio.  Bills gotta be paid.

And hallelujah, Mediavine immediately brought in it enough for us to pay for the redo that this old blog so badly needed. 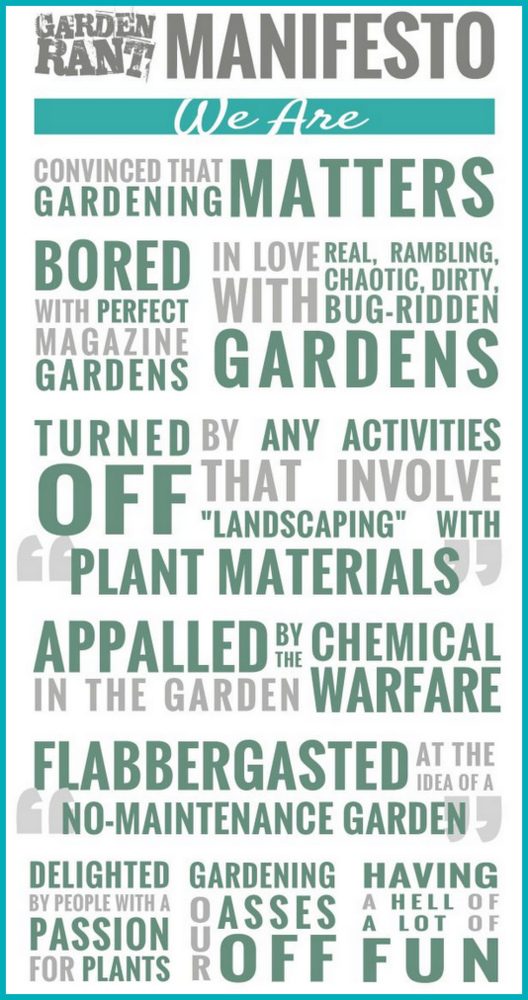 First we hired Jim Charlier, our friend the graphic and marketing force behind Buffalo’s successful Garden Walk and other promotions that put the city on the gardening map. We asked him to create a new logo for us and his genius idea was to keep the tools but point them inward, an homage to the movie poster for “Knives Out.”  We tweaked the colors and it was done.

Then we hired web and graphics designer Laura Bowly  in Oregon, Marianne Wilburn’s sister, who threw herself into improving this blog as only a true friend or family member would. In addition to the whole site design, Laura created all the other many graphics on the site, including our Manifesto.

GardenRant has never had an overall editor – we’ve each just done our own thing, and continue to write and publish whatever and however we want – mistakes and all.

Yes, as I’ve discovered in exploring our vast archive of almost 5,000 posts, having a multi-author blog with no overall editor can cause all sorts of mistakes, some too embarrassing to mention.  Luckily I’ve had time during this pandemic winter to shrink the 5,000 posts down to our best 1,300, and fix the major problems.

The cause of most of the problems was a site-move tragedy that stripped all the photos and even whole paragraphs. Another time we lost a year’s worth of articles! They weren’t even recoverable on the Wayback Machine.

So I guess the lesson there is that big sites especially, which this has become, need good technical management. At least we have it now, but we needed good traffic first in order for the ad income to pay for good help. A bit of chicken and egg. A new team blog would need some funding or the team members’ own investment, and we’ve had neither. Blogging here has always been its own reward, not money.

What GardenRant has Meant to Me

Where to start? Through this little blog I’ve become part of a professional world, my first ever – the world of plant people.  In other words, my favorite people – garden communicators, growers, public-garden staff, entrepreneurs and other passionate gardeners across the English-speaking world.

I got to know these fine people where they gather around the country – at symposia, flings, trade shows and more. Those events may not look exciting, but they were for me and being part of the plant world has been the highlight of my life. 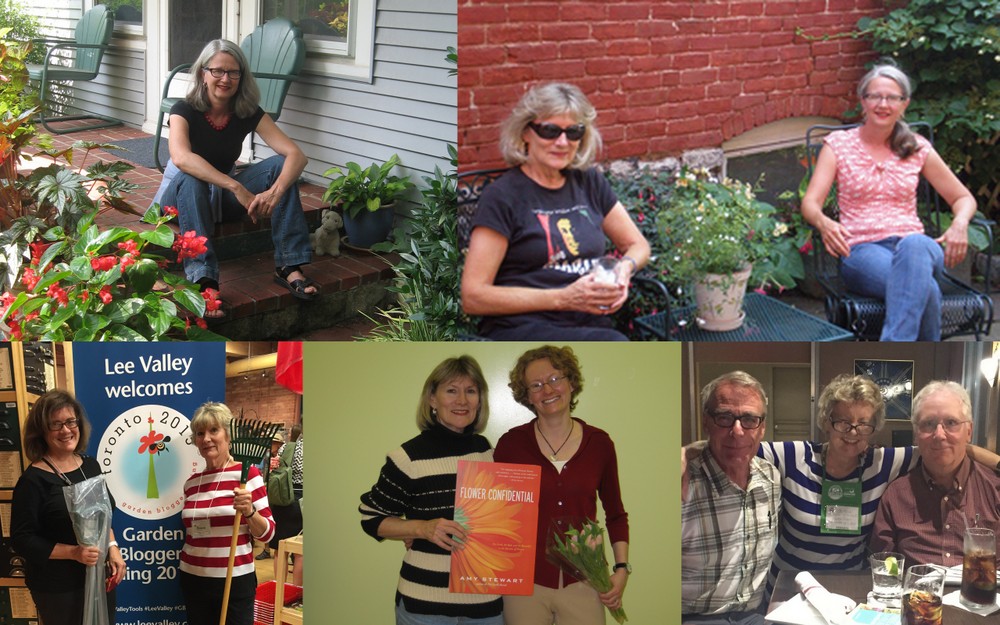 And at some of those events I’ve had the chance to hang out with my blogging partners.  In the top row are: Michele in front of my Maryland home, then chatting with me in Elizabeth’s Buffalo garden. Bottom from left are: Elizabeth and I at the Toronto Garden Blogger Fling; Amy at a D.C. event for her book Flower Confidential; and hanging out at the bar with Allen and Tom at the garden writer symposium in Atlanta.