The Crossroads of Horticulture 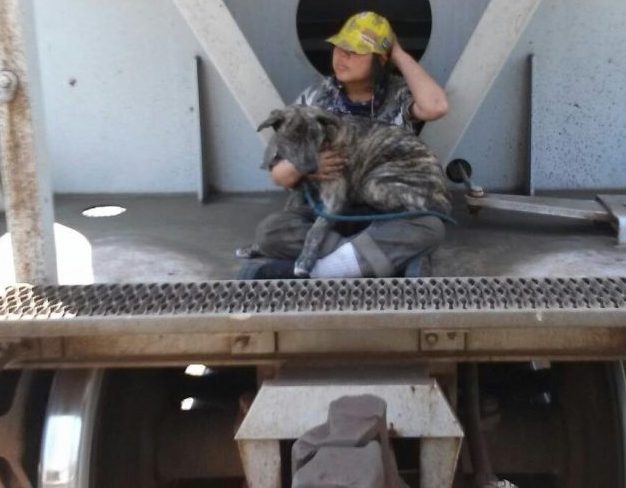 Joanne and Clyde on a slow-moving freight train in 2013.

Proto-punk rocker Iggy Pop and gardening aren’t usually conjoined, but Pop’s song The Passenger could be a portrait of gardener Joanne Kim.

“I have The Passenger on my playlist twice,” she said.

Joanne has traveled far and absorbs subcultures everywhere she goes.

Her passion for plants blossomed from a love of music and travel.

“There are a lot of parallels. You try to absorb the lineage of each band and plant. It’s so deep. You go into a rabbit hole.” Joanne explained.

The fearless 28-year-old has arrived at the crossroads of Horticulture and Where-to-Now. Joanne is not sure where a budding career will take her but is confident she will find the way. 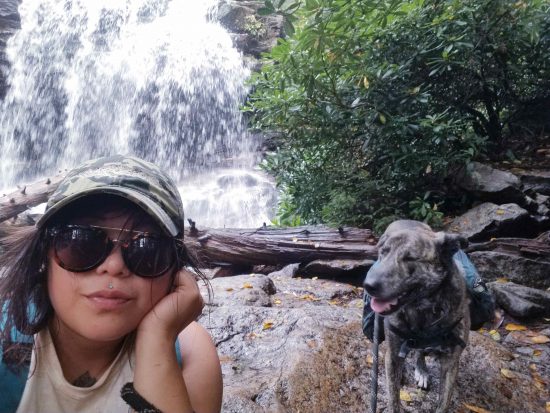 Joanne Kim is the child of Korean immigrants. Her father came to Wilmington, Delaware, in 1984; her mom followed in 1989. They opened two beauty stores that sold hair accessories, apparel and household products for the Black community. Joanne’s mother, who had an entrepreneurial instinct and worked long hours, took over the business after her parents divorced.

“I give credit to first generation Americans because a lot of people don’t understand the misidentity that comes with being born in America…I sometimes fought my Korean heritage. I wasn’t ashamed of it, but I didn’t understand how to process how I can be 100% American and 100% Korean. Now, I am not afraid of being friends with anybody.”

Joanne doesn’t take much for granted.

“My mother grew up in poverty. America was the land of opportunity.”

Joanne’s mom, dad and stepdad had high expectations for their daughter. They hoped she might become a doctor or a lawyer.

“I would not be able to dream as big as I do now without my parents’ support. They are so happy that I have found a career path.” 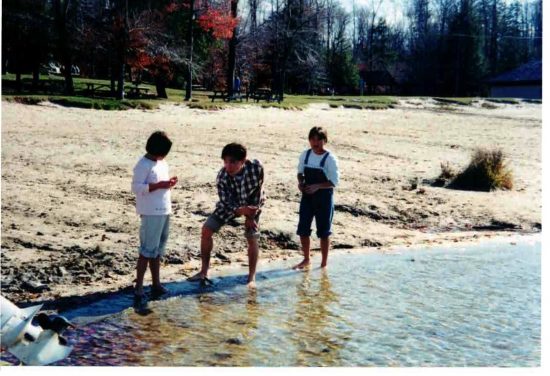 Jinho Kwon teaches his stepdaughters, Joanne and Alison Kim, how to skip rocks.

“Ok, you love plants, let’s go with that,” her stepdad told her.

“I didn’t watch TV, as a child, but I listened to a lot of music at my mother’s store—everything from R&B, Mary J. Blige, Boyz to Men to Selena,” she said. Her musical frontier eventually expanded beyond the store to punk and heavy metal.

“I was bullied a lot by Korean kids because I was the weird kid, that ‘Goth Korean girl’ who loved subcultures. It had a positive influence in the end.” 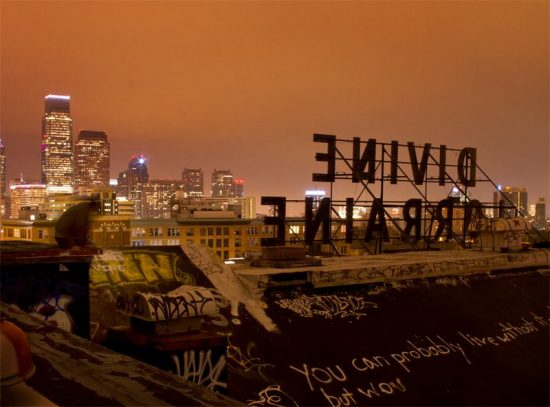 A rare rooftop photo of the “notorious” Divine Lorraine Hotel taken by a photographer friend of Joanne’s. (Joanne is a small blur on the left.) “My friend and I snuck into an entrance point and climbed to the roof of the abandoned building and it opened up to a wide, city sky…The juxtaposition between beautiful architecture and the unkempt landscape and dirty stone walls gives it a mystique that attracts graffiti artists and explorers.”

“I got into rock and roll and heavy metal. In that community, among the nerds, the more you knew about music and the bands, the more popular you were. I spent all my time researching music, the bands, what instruments they were playing, the sounds, even the influence of Blues and Jazz. I see that being very similar to plants, because once you begin to learn plant names, you want to learn species.”

The cool kids were pestering their parents for cell phones in 2004. Joanne wanted one, too. Her mother was a smart businesswoman. She made a deal.

If the 12-year-old went to summer camp in Korea, and got through the program, she would buy Joanne a cell phone.

“In my head, summer camp in Korea sounded fun. It wasn’t until I was a day or two into it that I realized it was a boot camp.”

The camp’s mission was to encourage kids to walk across the 750-mile length of South Korea. It was a popular rite of passage. There were 75 kids walking with Joanne. Not everyone needed an attitude adjustment.

“It got a little crazy. My boots weren’t comfortable, and my toe became badly swollen…They cleared off a table, laid me down, gave me two Advils, got a pair of pliers and ripped off my big toenail. One of the most painful things I experienced, but I finished the walk and got a cell phone.”

The long walk would be Joanne’s primer on how to deal with weather changes and what would become the physical demands of being a gardener.

Joanne trusts her instincts. In her late teens and early 20s, the wild child hit the road— without her parents’ knowledge—hitchhiking, riding busses and hopping freight trains.

“The hardest to learn were freight trains. Now I can look at trains and pick out the ‘rideables.’ The only limitations, when traveling on the cheap, are your body and your will. You keep going until your body gets tired.” 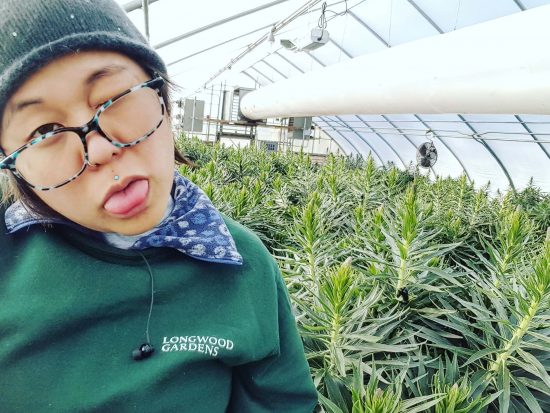 It was an honor for the “greenhouse brat” to help tend an impressive Echium crop under the direction of Yoko Arakawa at Longwood Gardens.

“I saw the bluest skies and the brightest stars on a crappy Georgia off ramp with 18-wheelers blowing by.”

Joanne stayed with “travel community” friends in Erie and Chattanooga and got her first taste of gardening when she worked for Arlene Dean at her “massive” orchid collection in Charleston, SC, in 2014. “Arlene was my horticultural godmother.”

Joanne got bitten by the gardening bug. She worked for Church Creek Nursery, wholesale growers, on Johns Island, SC, in 2015. 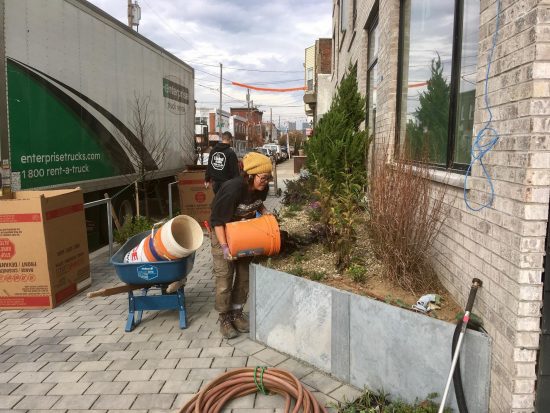 Apiary Studios, a Philadelphia landscape design/build firm, is a small business with an eclectic vision. “Martha Keen is an older sister figure to me and she does most of the build aspect. I jump on top of any opportunity to help Martha with a project.”

She returned to Pennsylvania in 2016 and worked with “mum master” Yoko Arakawa at Longwood Gardens, growing extraordinary chrysanthemums for the “high wire” October Chrysanthemum Festival.

“Yoko was my first Asian ally in horticulture. Compassionate woman, loves plants, wicked smart and knows how to work.”

Joanne hired on at Chanticleer in 2018, and her curiosity went wild.

“My knowledge of plants evolved. I became obsessed. “The more you know, the more you don’t know.”

Joanne is now enrolled at Pennsylvania College of Technology and wants to transfer to Penn State to pursue an undergraduate degree in Horticulture.

She also does occasional “rogue” work with Ed Snodgrass at Emory Knoll Farms in Bel Air, MD, and Apiary Studio in Philadelphia.

“Throughout my life, I felt like the underdog. I could outwork anybody but was overshadowed because I don’t have a conventional upbringing.” 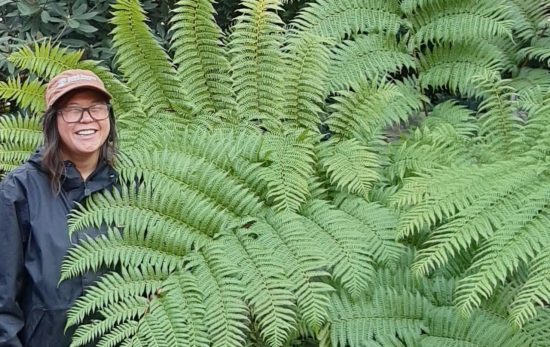 Joanne and a tree fern at Chanticleer

“I feel like a lot of other kids who grew up in impoverished neighborhoods feel the same way. These are the people I really want to connect with because it is important for them to feel their inner power.”

“I grew up in the city. I didn’t know anything about plants. I empathize with city kids. I know Ron Finley does, too.”

“I’m full of spunk and leaning closer toward a time to email and tell Ron I’m coming out to L.A.”

“Lust For Life is full of optimism as young people should be…but too many aren’t,” Pop said in an interview with the New Musical Express.

Be on the lookout the next time you see a freight train come through town.

Joanne Kim may be on board.