Thanks for your letter of 16 November.  A good and thoughtful letter, which had me laughing.  I wish you two lived closer so I could have a dose of that humor around our dinner table.  I believe the table is six foot from one end to the other, so if you and Michele took one end and Mike and I took the other, and we threw the vol au vents back and forth after a quick spritz of Clorox, we’d still be following guidelines.

We’d be happy for the company. My favorite part of autumn – friends enjoying fire, food and conversation – has been crippled by the machinations of a clever virus.  Instead we must all stay home and build healthy habits of competitive online shopping with whatever credit limits are still available to us. 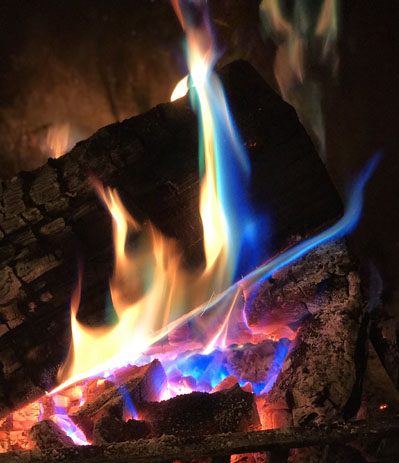 I cannot help but feel sorry for the Amazon drivers who have drawn the short straw each week and must venture out to the Willburn hinterlands with their padded envelopes and half-empty boxes. My road can only be classified as a road in parts of East Africa and Western Australia, and as they venture deeper into this Robert Frost poem, their mettle is surely tested.

There is terror on their young urban faces when they arrive – having dodged the potholes, the falling ash limbs and black snakes, and made it across a rail-less bridge which too often spans a swollen and angry river.  GoogleMaps deserts them as their signal fades; and to top it all off, my wolfhound bounds up to the van and the sounds of afternoon target practice ring through the valley.   It’s just not worth $12.96 an hour.

I have been known to offer them candy as recompense for their journey, but I am soon approaching the age where that, too, could be considered terrifying.

Autumn is slipping away without a single fall table arrangement on the always-cluttered table – this despite harvesting thirteen of the most beautiful white Boer pumpkins I have ever grown. Decorating indoors seemed redundant and labor-intensive with so much beauty outside. Including the pumpkins. 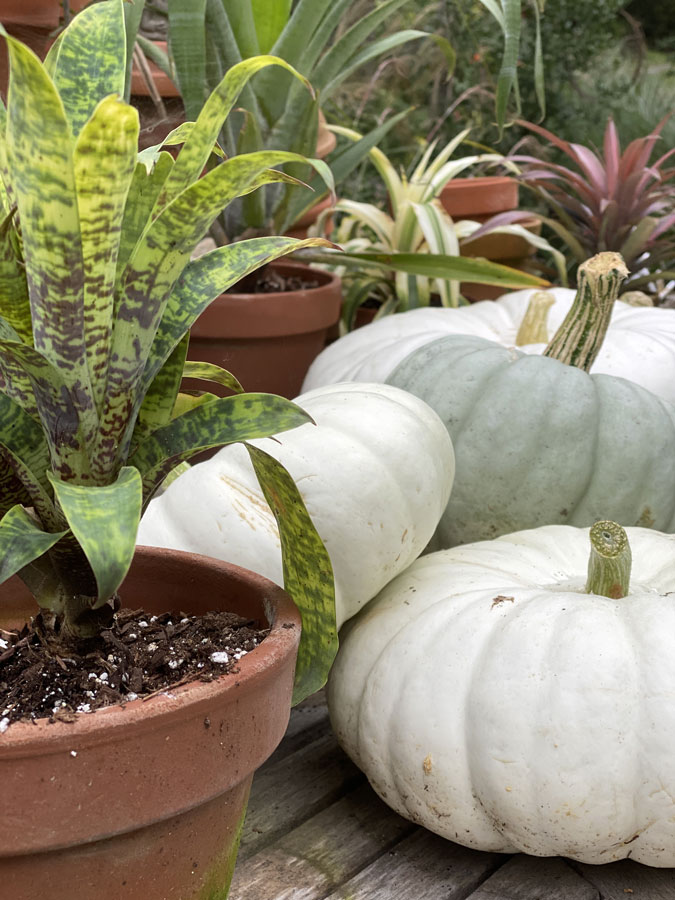 It usually does. As much as I revel in the colors, scents, and quiet contraction of autumn each year, I can rarely muster the enthusiasm to participate in Autumn™.  I cannot help but think of the metric tons of cinnamon bark that could be saved if people just went for a weekend walk in a wild area, and breathed deeply of the real fragrance of this season.

The musty layers of earth, spore, fungi, leaf…the occasional breath of wood smoke from a far off fire…even the stench of tender, succulent foliage and fruit that finally succumbs to a hard freeze.  Give me that any day over a house permeated by the scent of Mackintosh Apple Yankee Candle and a mum in every pot. 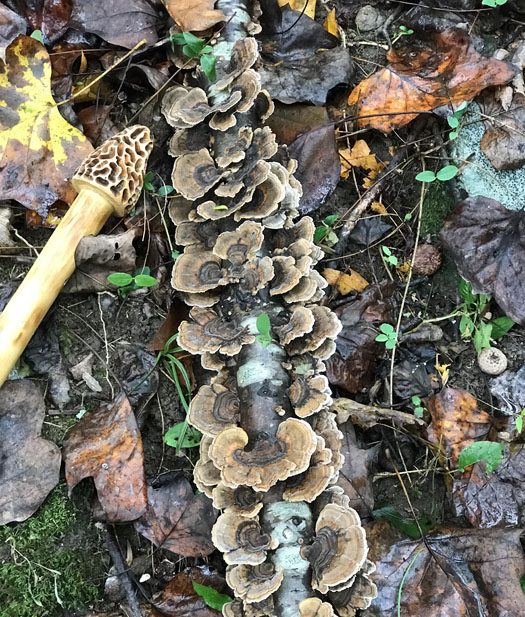 And before you call me spoiled for autumn scent as I live in the country where Amazons fear to tread – in my defense I have lived deep within enough cities in my life (without an automobile to free me) to know that wild places are always for the finding. They are smaller, certainly – and sometimes of a curated wildness, but they do exist.

I remember scanning maps for those little bits of as-yet-unknown-to-me green – and then off to find them on a free morning with the aid of public transport and a sandwich.  Sometimes they would turn out to be no more than an expanse of turf, or a wind-swept, rambling allotment; but sometimes they would be something more…something wild and freeing. A place where I could squint my eyes and see the ghost of the land the city had claimed.  I could breathe deeply and be transported for a moment. 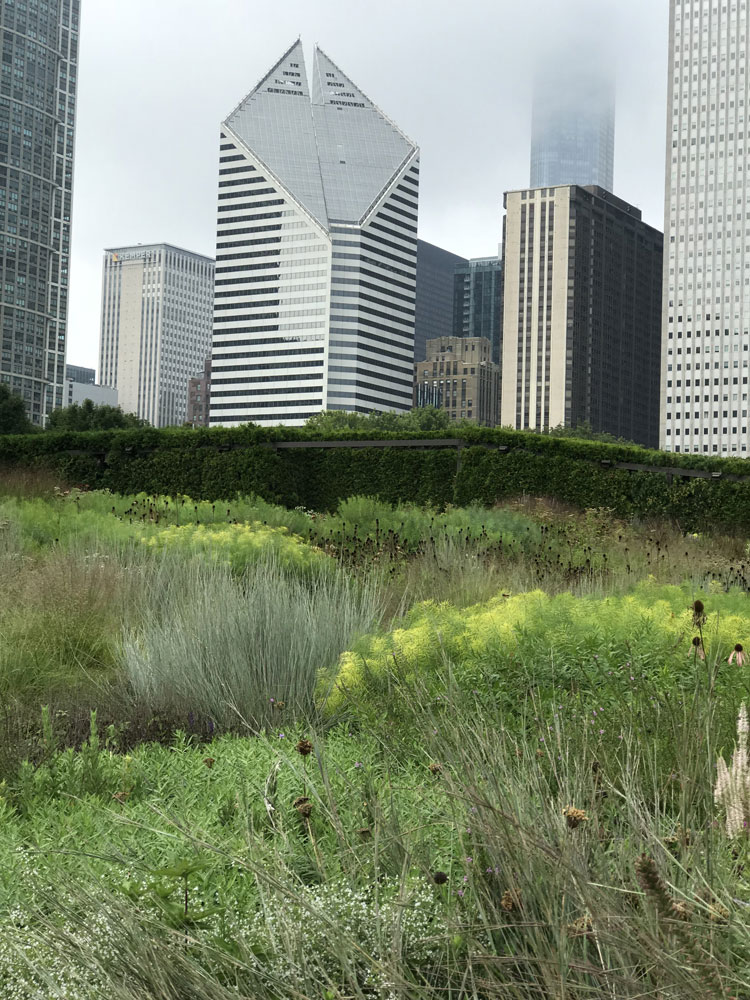 A wild Chicago in Lurie Garden

Later, the wheels of my son’s cheap stroller were pushed far beyond manufacturing guidelines to give us both a wild whisper of autumn.  I can’t imagine the places we would have discovered with one of these modern, rugged, unbearably hip strollers with better suspension than my Subaru.  We might never have made it home in the evenings. 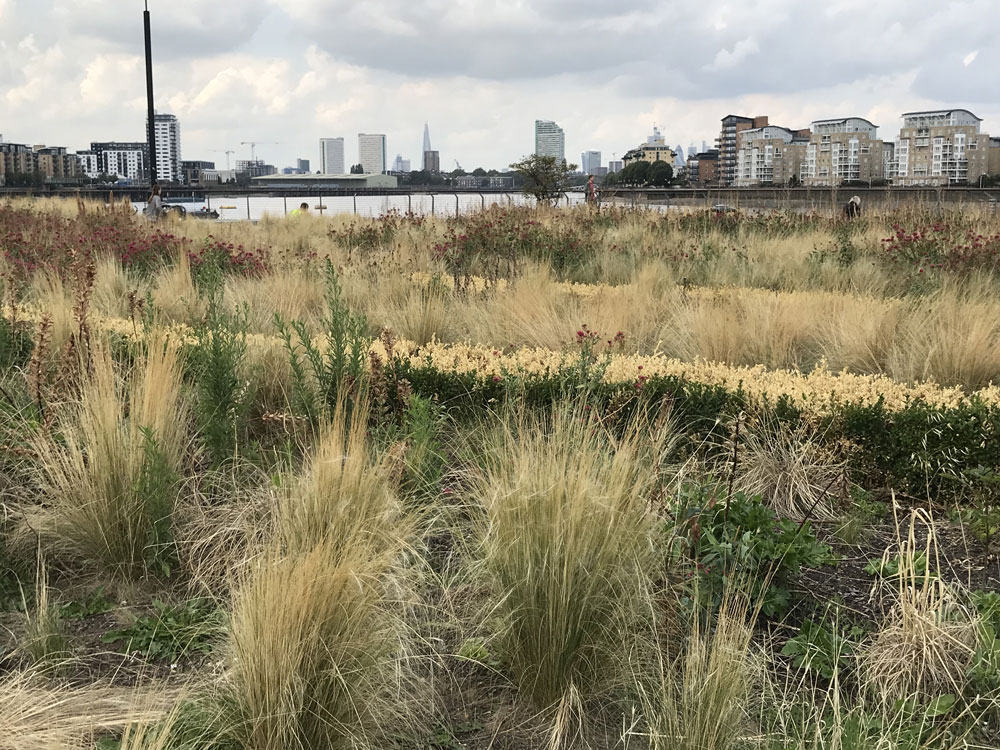 A little bit of wild London from the windows of Docklands Light Rail carriages.

In any case, I will be happy to see the chrysanthemum pincushions disappear for another year.  I have never understood the appeal.

But you didn’t write to hear my [fully justified] prejudices on the subject of fall décor. De gustibus non est disputandum as I believe you all say in Cincinnati.

You are absolutely right. LiZiqi is an artist.  I watch her videos the way I would listen to a complex piece of music. She orchestrates the camera angle, the bird song, the music, the grandmother, and ends with the audience transfixed and the Chinese Ministry of Propaganda deeply satisfied.  Only the best of a simple, agrarian life depicted – Mao would be proud.

I do not care – I need the mental enema right now.

Your thoughts about great art as the depiction of longing nailed it.  You may have a second career as a critic if I’ve sunk our chances at getting that book contract.  “Everybody has a village green they go to when the world gets too much.” said your beloved Ray Davies. LiZiqi is my village green.

Let’s save this discussion for a few glasses of wine and that dinner table when the world stops being too much. Perhaps I’ll introduce you to another fantasy – Kate Rusby, aka The Barnsley Nightingale – who did a very good remake of Village Green Preservation Society and takes longing to a new level with her brown curls and evocative lyrics.

The tropical plant migration was a bit late this year.  I like to get anything destined for the house indoors before the temperatures have fluctuated too drastically (they lose less leaves that way), but when that time arrived, I happened to be in fiery California, wearing a mask for two completely different reasons.

And as everyone who goes away to get away knows, there is at least a week between the moment one gets home, and the moment one actually wraps one’s mind around being home, where a hell of a lot of things slip through the cracks.

The electric bill for one. The Begonia luxurians for another.

I eventually brought too many of what I term my High Maintenance Partners indoors to spend the winter with me this year. But it’s all done and dusted now – they have staked a claim to the top of Nessa’s 300 square foot crate. They look at me, and I look at them, and they wonder “Will you water me?” and I say, “Of course I will, I have a book on tropicals coming out – you chose a good year to bewitch me. Well played.”

In other, more temperate, news, I have decided to completely revamp my vegetable garden over the winter months.  I cannot believe I am undoing things I once did, but my raised wooden beds are at the end of their useful life, and I can no longer cope with mulched pathways that break down into friable, earthy seed propagators before I can get the last barrow spread.  I also need a little order in at least one section of this wild and wonderful valley. I need a few strong lines and shapes to set my world on fire. 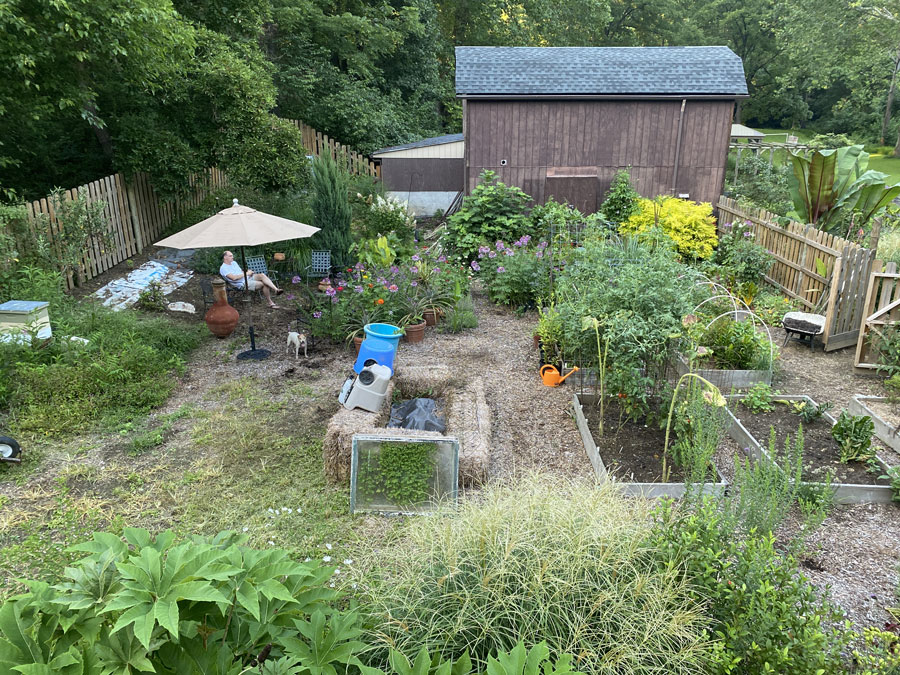 The vegetable garden in late summer from high on a ladder outside the fence. Notice the complete lack of weeding activity in a) husband, and b) dog. The straw bale coldframe should be the site of a greenhouse, but not for some time I fear. This area was a field five years ago, and has been handled in stages as time permits to allow me to grow deer-free veg. Looking forward to some serious plans this winter.

And gravel.  I think I need the clean crunch of gravel, which, as a bonus, won’t set my world on fire when I scorch it with a propane weeder.  Damn that was a bad day.

We do what we can with what we have when we have the time.  That covers pretty much all of my gardening life – as I’m sure it does yours – but I’m going to make myself spend a little money this time. Not Corten steel money, you understand (sniff), but more like 4×4 post money. So pre-order my book please and fund my gravel.  And my posts.

Actually, nevermind.  I believe I promised you a copy.

Good luck with the new series of interviews for Horticulture – a fine idea and I look forward to reading them. And BTW, I am right with you in the celebration of yellows and browns in the autumn landscape. From here on out I will regard my reds as shameless harlots.

P.S.  Your garden looks lush and serene, and from the state of those hosta, apparently deer-free. The criminal, deodar-murdering deer that eat my garden instead of the 300 surrounding acres of tender but more common foliage is another reason I love my “ex-marine who studied marksmanship and probably owns a gun.” There’s no probably about it. And he’s not the only one.