Ed Lyon on How to Write about Native Plants 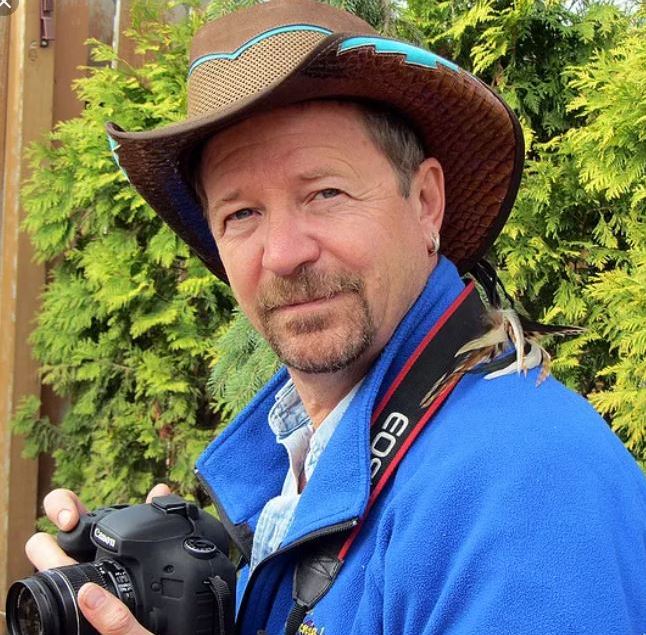 I’m back with another report about a terrific talk I heard during the garden communicator conference in Salt Lake City. This time, it’s a talk by Ed Lyon, director of Reiman Gardens at Iowa State University, about how garden writers should be writing about native plants. (And thanks to Ed for amplifying on my notes.)

While praising garden communicators jumping on the “noble bandwagon” of promoting the use of native plants, he argues that the missing piece is educating the public about the challenges this might entail. He urged us to “Educate!” and to expand the topic beyond from the usual messaging.

How to Attract People to Gardening

Ed believes the way to attract people to gardening is NOT by telling them that annuals in massed displays such as at Longwood and Butchart Gardens are environmentally irresponsible. Annuals are often the very plants that first entice non-gardeners to try gardening. Telling them to avoid annuals and plant only natives can lead to disappointment if the results aren’t colorful and visually appealing enough.

Here’s a number that surprised me: that 60 percent of all plants sold currently are annuals – they get people started. Succulents and houseplants also bring people to plants, getting them connected to plants again. “No single type of gardening can bring in enough people.”

So Ed’s message is that we shouldn’t make people feel guilty, and scare tactics never work. We should embrace people wherever they are along the gardening path. Once they’re “in the fold” we can educate them to more sustainable practices, but we can’t do that if they haven’t started gardening yet.

He also mentioned his worry that many of the upcoming young horticulturists have jumped on the “natives only” bandwagon or are promoting some other single style of gardening. But “there are millions of people not currently gardening. If our goal is to get as many as possible involved, we’ll never accomplish it if we limit gardening to one style.”

As writers are covering hot trends like prairie gardens, native gardens and rain gardens, Ed urged us not to forget the “garden” part. Despite the implied impression that the resulting prairies, meadows, and native gardens will be self-sustaining, they won’t be. They still need management and maintenance, and when inexperienced homeowners aren’t told that, they often end up with weed-infested messes. In their frustration, novices may revert their home landscape to what they know to be easiest – turfgrass.

An enlightening moment for me was learning why prairies are relatively weed-free in natural states but plenty weedy where they’re created. It’s because true prairies cover hundreds to thousands of acres and airborne seeds don’t travel that far into that large space. The weedy areas are along the edges of the prairies. So naturally, a small home “prairie” is more like a true prairie’s edge, not its interior.

How Natives Behave in Gardens

Ed explained that in practice, native plants plants don’t always work as intended, or where intended. Lurie Gardens in Millennium Park and the High Line in New York City are examples of noble efforts at using 100% native plants. But the cultural conditions of both sites weren’t conducive to some of the native species, so non-natives that are more durable in these conditions and complement the naturalistic planting effect were added.

There’s the illusion that plants considered “native” will always be the more durable option, but Ed reminds us that’s simply not true. It might be if the conditions where they’re being planted are exactly as they were when they evolved and adapted to the region, but you simply can’t find indigenous sites that haven’t been highly modified many times over the last several hundred years.

On the other hand, a native like milkweed spreads and can be a thug in garden settings, and people need to know that – not only because it may take over areas of the garden and be difficult to control but because it can easily spread by seed to neighbors. 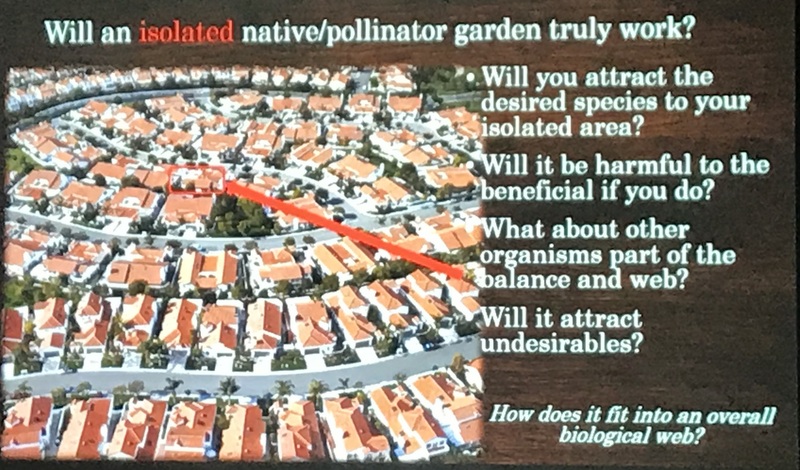 People generally plant milkweed in their gardens to provide for Monarch butterflies, but Ed believes the focus should instead be on agriculture, where large quantities can be grown, not “tiny dots in back yards.” So we should encourage farmers to plant the edges of their fields with milkweed because what the Monarchs really need is re-establishment of the large masses of milkweed that have disappeared.

Another problem with all the focus on Monarchs, just one species of butterfly, is that other species that need the same protection and attention are ignored. Ed told the roomful of garden writers, “If you want to increase your opportunity to sell a story, start writing about the other butterflies, insects and fauna that need attention. This will expand your opportunities for stories and help the overall native effort.” 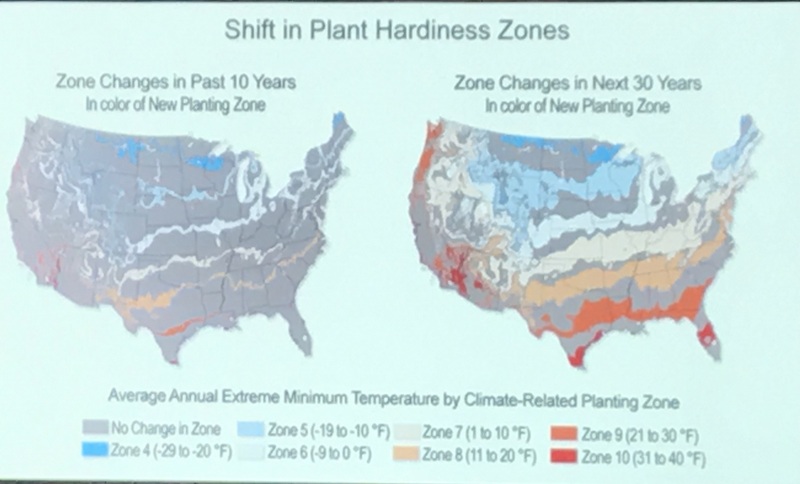 Human influence has brought about major changes in our environment, including the spread of invasives and disease that make it impossible to use such natives as ash, American chestnut, and American elm. No matter how noble the effort to use natives; there are those we simply should no longer plant.

Ed’s point is that urban forests need to be diverse, and not just include a few native species, as is the trend. For maximizing diversity and limiting the spread of insects and disease, the goal is to use no more than 5 percent of any one genus in an urban forest, which translates to at least 20 different genera in the city’s tree population.

For example, in the Midwest ash has been used as a major street tree (20% of most cities’ tree populations) but then wiped out by an invasive insect. Oaks and maples, two other giants of urban plantings, are the next two genera expected to see severe losses due to new diseases. So leading experts in woody plants are telling cities they have to include nonnatives in urban forests because there simply aren’t enough native trees that will survive there.

Turning to the literature on this topic, Ed applauds Doug Tallamy’s “revolutionary” Bringing Nature Home, but suggests we also read Where do Camels Belong by Ken Thompson. It makes the point that flora and fauna have moved around the planet throughout history and we’re spending billions of dollars to battle invasive species when plant movement is a natural occurrence.

Ed warned us not to get caught up in views at either end of the spectrum, views asserted as “the only way.” His point is that humankind has so dramatically changed the global environment that our solutions for the future are likely to be found somewhere in between these two views. 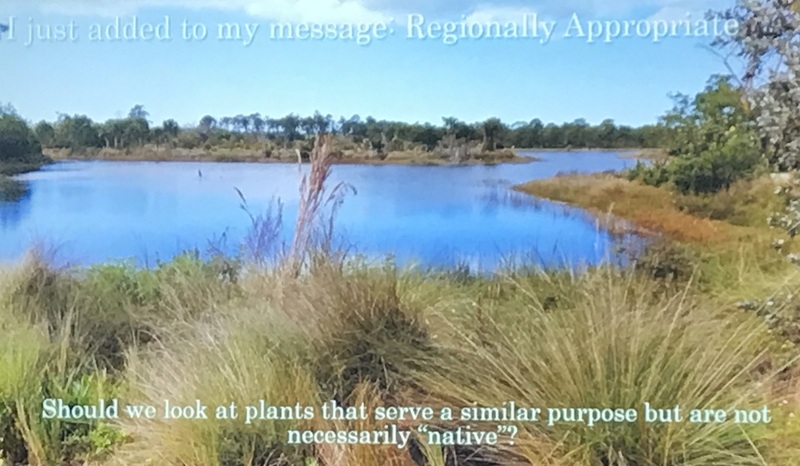 Ed suggests that with climate change, we should focus not on “natives” but on “regionally appropriate” plants. This term includes the possibility that if a native species is no longer able to thrive due to new, permanent adverse conditions, maybe there are similar plants from other regions that would provide the same benefits.

And instead of dissing some plants as “ornamentals, how about simply asking “What plants will do best in this landscape?” Ed suggests we learn from some “wonderful sustainability focused gardens that include nonnatives.” Olbrich Botanical Gardens in Madison is one example of a garden that uses a wide array of styles, from sustainable meadows to a new type of low-maintenance gravel garden to combinations of durable native and non-native plants.

Writers Teaching Gardening
When writing and speaking to novice (and probably advanced) gardeners, Ed encouraged us to stop showing lists of plants we think people “should be responsibly planting.” Instead, we should tell them to start by analyzing their particular site for environmental, geographical and, most importantly, cultural conditions.

And we should not encourage them to use only plants that were indigenous to that area 200 years ago. To illustrate his point, he showed us a part of Wisconsin he’d gardened in where the soils had been heavily modified over 100 years of agricultural tillage and chemicals, then further modified during construction of the homes. “Never base a plant palette on what was native 200 years ago; base it on what the conditions are currently.”

“Hear, hear!” to everything Ed said.

For more information about Ed’s writing, speaking and consulting, go to Spellbound Garden.