Eleanor Perenyi and “Green Thoughts”: an Appreciation and Reconsideration 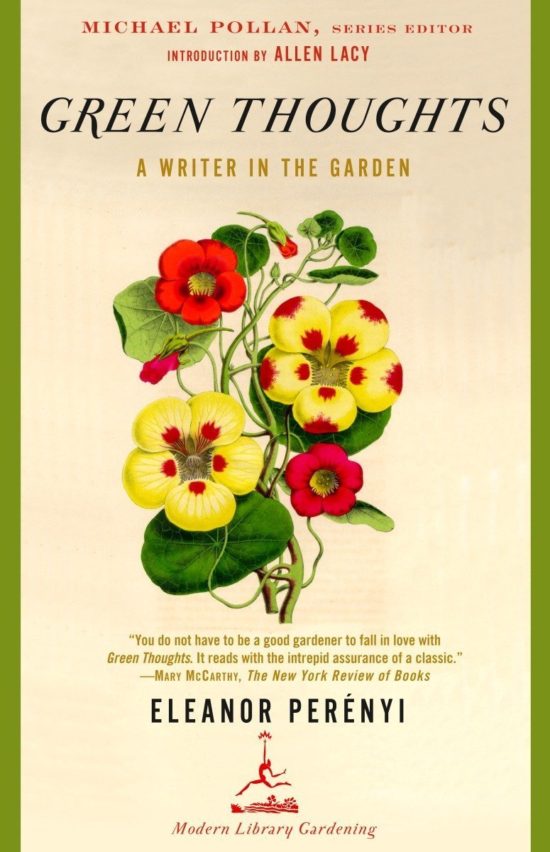 Meeting Eleanor Perenyi in print was like having someone understand and appreciate my toil, and relieving me of guilt for failures.  In gardening, anyway.

A friend gave me her Green Thoughts  back in the early 1990s (it was published in 1981) when I was a lowly apprentice to a Washington, D.C. garden designer with high standards and demanding clients. (“I want 100 white clematis going up the wall across from the pool, and I mean blue-white, not ivory.” or “The wedding is next week; we’d like an arbor of pink roses.”) The giver, not a gardener, loved the Andrew Marvell lines that gave Perenyi her apt title.

Annihilating all that’s made

To a green thought in a green shade.

Green Thoughts: A Writer in the Garden consists of 72 essays, arranged alphabetically – asters and annuals through perennials to weeds and women. (A loose arrangement, no awkward stretch to pull in an X or a Z.)

Her alphabet closes with a bang – “Woman’s Place”, in which Perenyi digs into the unusual topic of sexism in horticulture.

Women, as she sees it, were fooled into retreating to the flower garden and taking on the tedious chores like weeding and deadheading. The problem goes back to hunter-gatherer pre-history. When men retired from hunting, women, who had been the first gatherers of herbs, greens, roots, and seeds, were limited to flowers – “Of all plants the least menacing and most useless.”

The chore-assignment has persisted over the ages. The gardener La Quintinie, Perenyi reports, in charge of Louis XIV’s potagers, recommended hiring married men because the wives would be available for weeding, as well as cleaning and scraping out pots. Perenyi muses that, like so many repressions, the move to confine women sprang from fear: “Men were always half in terror of women’s complicity with nature and the power it gives them.”

Perenyi’s knowledge came from 30 years of amateur experience in her Stonington, CT garden, where she was the sole authority, the designer as well as the pot scrubber.  She did have some help – youths requiring close supervision. But we know she was willing to sling 50-pound bags of dehydrated cow manure, and take scissors to snip a tomato hornworm in half – “a disgusting business, but much safer than spraying.”

F in her alphabet is for failure, and she tells her readers that some things are not worth the trouble. Do not bother with Chinese tree peonies. These woody plants bear the supremely gorgeous silky flowers of Chinese art, but they are stingy, slow, and capricious about blooming. She sticks with the far less demanding herbaceous peony, sumptuous, fragrant, and floriferous.

Do not, she warns, attempt to replicate the garden plans of British plantswoman Gertrude Jekyll. (There was a moment, 1970s to 1980s, when every Anglophile American gardener wanted to follow her lead.) Jekyll is a true heroine and pioneer in design, but Perenyi tells the reader to remember that Jekyll herbaceous borders were 100 feet long, with something gloriously in flower nine months a year. Many of the gardens she designed were south of London, in warm temperate counties with average annual rainfall of 55 inches. In any case, a third of Jekyll’s plants were removed and replaced in the course of a summer by a battalion of skilled gardeners.

Perenyi is not as prescriptive and severe about color combinations as Jekyll. The labels on Perenyi’s dahlia tubers fell off and, when replanted, a pink flower popped up among the yellows. “Obviously one tries to avoid the worst (which for me was an old scarlet poppy next to which mauve foxgloves invariably sowed themselves) but I don’t think it’s necessary to plan a herbaceous border down to the last forget-me–not.”

Her gardens were more inclusive than those of her fellow homeowners in Stonington. A neighbor noted that Perenyi seemed to have a penchant for “the conspicuous.” “She meant vulgar”, Perenyi decides, adding, “it hasn’t escaped my notice that mine is the only WASP garden in town to contain dahlias, and not the discreet little singles either.”

She’s very firm about avoiding the use of pesticides, weed-killers, and almost any soil additive. Resist the pressure from the nursery manager to buy chemicals, or the crowd-pleasing petunias loading garden center shelves. This stinging dismissal popped up in reviews of Perenyi’s book and then in her obituaries.

“They are pretty, very pretty – and as hopelessly impractical as a chiffon ball dress. Rain soils and bedraggles them.” Perenyi knew her fabrics, chiffon and others; before retirement she was an editor at Mademoiselle and a contributor to Harper’s Bazaar.

Perenyi’s voice is an antidote to the genteel and sentimental tone of many garden writers -vinegar (white balsamic), not honey. Gardening is much more than those un-menacing flowers. Perenyi takes immense pleasure in plant material breaking down. In her compost heap bushels of yard and kitchen litter turn into to “something like devil’s food cake.”  It’s on the topic of soil enrichment when she remembers “smoking piles of straw and manure on our Hungarian estate” that we first learn about her dramatic past, and why she bears a  Hungarian last name.

Traveling in Europe with her parents, Eleanor Spencer Stone, 19, met Zsigmond Perenyi, an Oxford-educated Hungarian aristocrat twice her age, at a diplomatic dinner. After a very short courtship they married and went to live in his family’s castle in the province of Ruthenia, formerly Hungarian, but under Czech control in the 1930s. For a while the couple had a kind of paradise – albeit a feudal paradise. The young American baroness oversaw the cutting gardens, orchards, and distillery with the help of faithful servants.

The two were cast out of Eden when World War II began. Zsigmond was conscripted into the Hungarian army and Eleanor retreated to the U.S. to bear their first child in safety. She and Zsigmond never lived together again. In her 1947 memoir of her time in Hungary  –
More Was Lost – (reprinted by the New York Review of Books Classics), she says simply, “we receded into different dimensions.”

Why, after working as an author-editor, raising her son Peter, and entering her sixties, did she sit down to write this book?

“Gardens like mine,” she writes, “which go by the unpleasing name of ‘labor intensive,’ are on their way out and before they go I would like to contribute my penny’s worth to their history.”

That prediction is not as accurate as her others. She would be pleased, nearly 40 years on, at the growing number of people happily performing many kinds of horticulture-intensive labor. Having no battalions of gardeners and under-gardeners, many 21st century gardeners have found the pleasure in turning the compost, cutting back the fading perennials, removing deadwood, and slicing hornworms. She would be particularly pleased that more and more gardeners are moving away from using pesticides and herbicides.

A strategy she used for avoiding pesticide use was to plant short rows of different vegetables interspersed with herbs and flowers to discourage methodical attack by insects.  She was surprised to see many suburban gardeners spreading weed-killing lawn mixtures next to a vegetable garden: “A garden is a world, and its parts are not separable.”

With a bit of baroness-hauteur, Perenyi writes, “Gardening is so little esteemed in this country that I can’t imagine where or how someone who wanted to study it would go for instruction.” 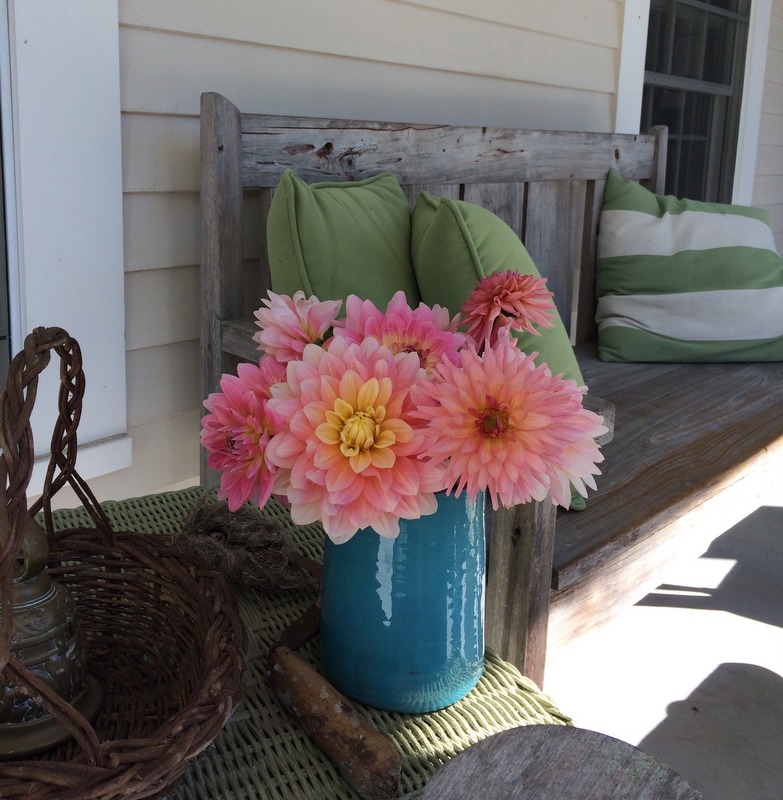 Dahlias from the author’s garden

Gardening in public places, for the New York City Department of Parks and Recreation (my best job ever) was proceeded by an apprenticeship and then a Brooklyn Botanic Garden certificate. My garden now is private; three hours’ drive inland from Perenyi’s coastal town. Farmers and gardeners in my county are bedeviled by a pest larger than the tomato hornworm – deer.   The creatures have modified our choices; more ferns and aromatic herbs. For the moment, the herbaceous peonies Perenyi admired are unappealing to deer.

Reading Green Thoughts is like talking to a kindred spirit, a benign ghost, over coffee. I wish she could see the change in New York’s Central Park, which, when she wrote, was “atrociously vandalized.” A gardener would leap to agree with her that autumn is the best time to work outside. She savors the season when, “heavier dews presage the morning when the moisture will have turned to ice, glazing the shriveled dahlias and lima beans, and the annuals will be blasted beyond recall. These deaths are stingless. I wouldn’t want it otherwise.” 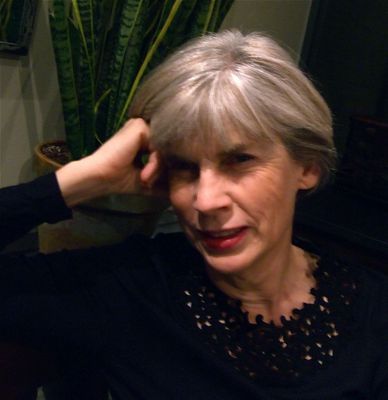 Here’s a soothing green thought: Gardeners, Perenyi noted, tend to lead long lives. She was born in 1918, and died in 2009. Someone who believes in composting as fervently as she did knows that all flora and fauna are headed for decomposition. Charming, knowledgeable, and intelligent writing, however, survives.

Constance Casey was an assistant gardener for the New York City Department of Parks and Recreation for six years. Long before that, she was an editor at the San Jose Mercury News and a national correspondent for Newhouse News Service.