Gardening and My Own Health

So long ago that I can’t remember when, I gave up on the idea of having any real pride in myself. It wasn’t what anyone would call a decision. No momentous occasion or anything. I just don’t really know that pride ever mattered that much to me. If I had any left, whatever there was was finished off by four years at a Jesuit college. Because, in case you don’t know this, Jesuits exist to convince young minds that one’s trajectory through life is subject to so many random social, physical, mental, and economic rolls of the dice that one’s own accomplishments are just a small part of a very large equation.

That said, I do my best, take advantage of the good breaks and shake off the bad, and, more recently, try to live a good enough life. So when and if I take my own pride into consideration these days, it’s less about something good I’ve done and more about something stupid I hopefully didn’t. “Hey y’all, look at me” kinds of things. Yeah, my pride is mostly focused on keeping those to a bare minimum.

That being said, I must share my proudest moment ever. It happened two years ago, and I was on drugs. Morphine, to be exact. I was just coming around following surgery and hazily listening to a conversation between the nurse and my wife. At some point the nurse happened to mention that my urine had good color. My urine had good color! Lord have mercy, I almost burst! Too far gone to speak, I simply basked in the moment like a Macy’s Thanksgiving Day balloon filled to floating with enormous, joyful lightness. Even now, soberly aware of the ridiculousness of it, I can still feel a little pulse of that joy. Such was just one of countless anomalous moments—sometimes surreal, usually all too real—that I went through while “surviving” c-c-cancer. 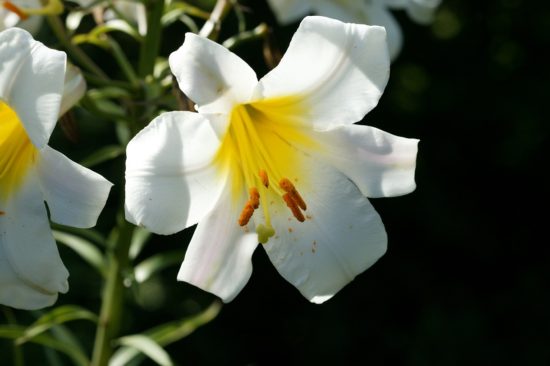 A cancer diagnosis launches you on an imagination-fueled, internet-misinformed, emotional and intellectual odyssey, even as your body suddenly becomes a whack-a-mole game for doctors and technicians. The word “survive’ is accurate. Really nails it. Because whether you make it or don’t, surviving the process is about all you really manage.  Everyone says great upbeat stuff like, “You’ve got this”, or, “You’ll kick butt!” but all you really do is what you’re told. You go to appointments. Lots of appointments. You take drugs. You do treatments. Go in for tests. Wait and wait and wait on results. Have surgery. You never really feel like you’re in control or doing anything to impose your will on the situation. At least I didn’t. Never had that LeBron James taking over the game for a win moment. Sure, I prayed, remembering every time I did all those friends and family I’ve prayed for that never got better. Some people try to become their own experts. I didn’t bother. Nor did I have any faith in miracle diets, exercises, meditations, trinkets, powders, or crystals. Nope. I just hit my marks, relied on 21st century medical science, and hoped for the best possible outcome. 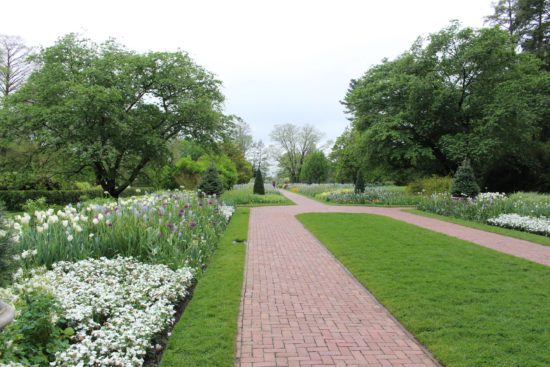 Oh, and I checked my dignity at the door. Big time. Prostate cancer requires this, in my opinion, more than most cancers. Doctors, nurses, interns, students, spouses, cleaning crews, paid spectators, preschool classes, all parading through and crowding around in small exam rooms while probing things are going in and other things are coming out. I found myself here, my clothes over there, people taking fluids, handing them off, and sometimes ducking them as they fly across the room. The worst was when I was wearing a hospital gown that simply wouldn’t stay tied shut and had a mile or two of corridor to cover between different exams with three waiting rooms, a news crew, a gift shop, and a cafeteria along the way. Eventually, I was so devoid of dignity that–and this is true–I crafted a euphoric group text to my wife, mother, and sisters that I had finally had my first poop since surgery.

I should probably tell you now that I had a very treatable form of prostate cancer. The surgery was successful. No radiation. No chemo. They tell me I have less than a 1% chance of dealing with it again. I was and am extremely fortunate and very grateful. I’m almost embarrassed to call myself a “survivor”, knowing that so many others have gone through so much worse.

Still, I’ve got to say the process did take over nine months. Six months of that fell into what my sister, the hospice administrator/RN, calls the “information void”. This translates as “the imagination run amok period.”  So when the doctor says it could possibly be cancer but probably isn’t, the mind fills in the gray area with, “Oh God, it’s cancer.” When he says, “You have cancer, but you’ll be fine,” that means, “Start planning your funeral.” When the technician refuses to venture an opinion on a CT scan, deferring to the doctor who will eventually read it, the only possible explanation is that they’re thinking, “I don’t get paid enough to tell people this kind of crap.” Six months of this! And my mind never wearied of tumbling like a gymnast through all the permutations.

But, eventually, it all got sorted out. I went in, had a prostatectomy twofered with three open hernia repairs, experienced the world’s proudest urine-related moment, and then I went home to keep on keeping on, using as a role model any dog’s total mood transformation following a cone-of-shame removal.

All of my follow up test results since have been good, and I’m grateful that my situation had a great outcome.  I’m well aware that it isn’t always so. My youngest sister died of cancer when she was 25 years old. Cancer has been all around me my entire life, and it has almost always meant that bad news gets worse. During my six or so months of information void, a friend was diagnosed with pancreatic cancer and died. During the hours and hours of time I sat sagging in waiting rooms and hospitals, I tried very hard not to overly notice others with situations far, far worse than mine. 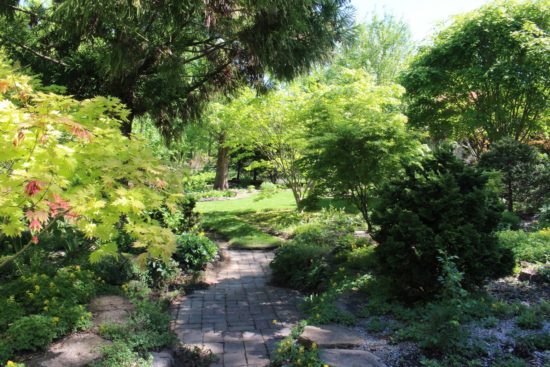 Throughout the process my garden was a crutch. Before an important appointment or after a bad one, you would sure as hell find me walking around and finding distraction or comfort or hope and sometimes God in my little scratches of design—favorite plants gathered in the sunlight, sprouting from the good, rich earth.  My family and friends were wonderful, and their love and support was a given, but my garden was where I could go to be alone, to process, and to pull it all back together. And I wondered, while I kept my eyes dutifully aimed at my phone in dismal waiting rooms, if these other patients had gardens or some other green spaces into which they could get their heads out of prognoses and patient plans and into a place that allowed them to feel the planet and gather perspective? 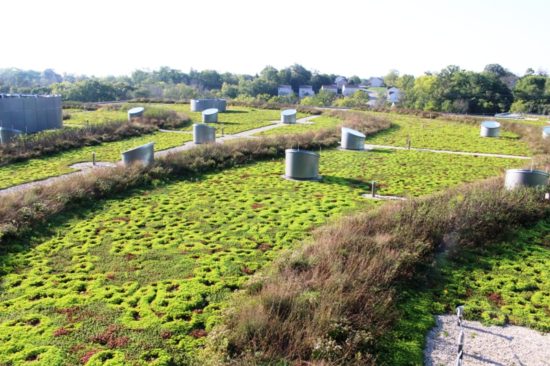 A green roof at Mercy Hospital West in Cincinnati. Many rooms look out onto this.

The room where I spent five days on morphine, consisted of four walls, a bed, a TV, an IV stand, and a myriad of discarded Jell-O cups. That was about it. Since then, I’ve toured a few newer hospitals that were built so every room looks out onto some form of nature, whether it be a woods, a green roof, or gardens. I think this is great, and I believe the research which suggests that such investment pays off with better outcomes, quicker recoveries, and even fewer pain meds. I believe that with every fiber in my being. 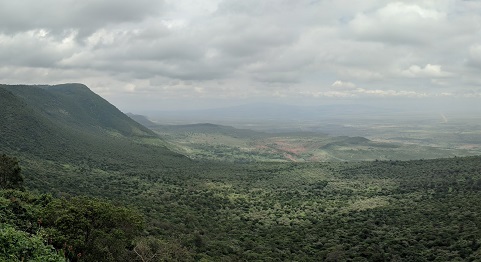 The Great Rift Valley in Kenya, on the road into Nairobi.

Great works of art can take your breath away, and make you feel, think, or even just stare without words to utter. Buildings soar and amaze. Cathedrals inspire. The works of Shakespeare have stood as pinnacles of literature for five centuries. Any of the world’s religions can guide, console, and offer hope. And all of that is good stuff. Important stuff. But I recently stood on a cliff overlooking the Rift Valley in Kenya and looked out over the very cradle of mankind, and it still looks every bit the part. Horizon to horizon of primitive, verdant wonder. Wild. Big. Beautiful. Primordial.

I get goosebumps just remembering. I can’t imagine I ever won’t. For it is from that ground that we as a species came. Those savannas, the sights and smells, are still in our DNA. Everybody should stand there once. Everybody should feel that feeling. To share in what we all share. And as a gardener I couldn’t help but to think that the Garden of Eden, the Hanging Gardens of Babylon, the great early gardens of Islam, the Temple gardens of China and Japan, Versailles, Longwood, Sissinghurst, my garden, your garden are the human spirit’s attempt to momentarily capture that lightning in a bottle. To remind us of home. To fill our hearts. Feed our bodies. Warm our souls. Allow us to grow even as we’re dying. 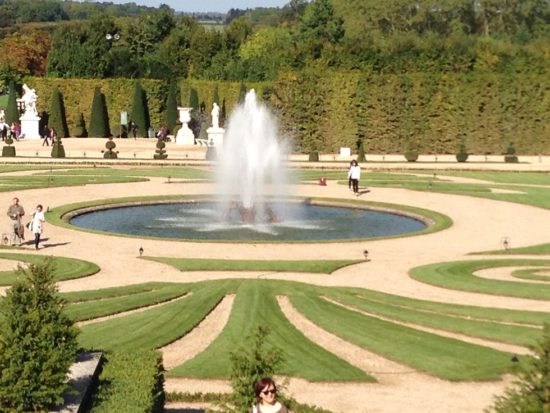