Time to Rethink “Pretty” in the Garden 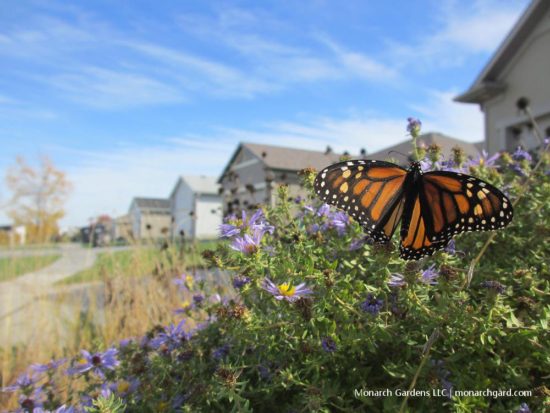 Benjamin Vogt and I began an email exchange last March after I read his very interesting A New Garden Ethic: Cultivating Defiant Compassion for an Uncertain Future.

A few weeks ago, Benjamin had a sign posted on his property in Lincoln, Nebraska that warned him about the public nuisance he had created. He won the fight to keep his front and back yard prairie, but this got me thinking.

I wrote my book to make folks as uncomfortable as I felt. I wrote it to question horticulture, landscape design, and all environmental movements. I wrote it to invigorate the discussion and get us to grapple with humanity in ways we avoid in order to protect ourselves from the reality of our lost love. I wrote it in order to unearth aspects of environmentalism I thought weren’t explored enough. I wrote my book out of depression, fear, and anger in order to discover a strength we all possess — the ability to go against the force of history and culture and risk some aspect of ourselves we assumed was better for us. Gardens are places of activism in a time of mass extinction and we need to start using them as such. And if gardens are art, if that’s the primary viewpoint about them that we’re stuck with, then remember the long tradition of art based in activism and making folks uncomfortable for a purpose. 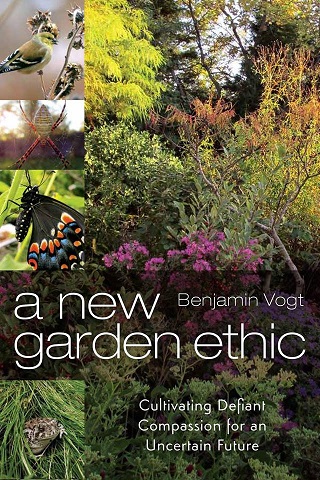 I apologize for being slow to read your book, but I’m glad I brought it to the top of my book pile.

I worried at the outset that it might be full of redundancies, but when there were similar claims, “We proclaim ourselves right in a wrong world…” (p.56), each new argument augmented your case. Rarely did I feel like you were talking down to me. On occasion, there were annoying passages, such as, “Native plants are a threat to an entire Western culture…(p 59).

But here’s what I got out of your book.

Surprisingly, I enjoyed your bits about “pretty” and “beauty.” It reminded me of an undergraduate course in Philosophy of the Mind. Your subject is complex but well written. However, I still like “pretty” and don’t agree that “pretty,” as a premise, need be “arrogant.”  I don’t think I’ve ever gardened for “human supremacy.” I was heartened, when you briefly backed off and said, “Of course a garden must be pretty.”

“Pretty” concerns me because that’s how we primarily judge the worth of a garden or landscape — I just want us to redefine gardens, especially in the context of mass extinction. What is pretty to the silent majority on this planet, to wildlife? I don’t think many of us garden for human supremacy in a conscious way, but when we go outside and say “I want this maple tree right here” we are practicing a form of supremacy since we are placing our desires over or onto the landscape, whether we’ve researched the tree and ecosystem or not. Now, I’m not explicitly saying such actions are good or bad, per se. I’m saying we must think more critically about our actions, and that if we don’t we are propagating an arrogance that has led us to the assumption we are at the top of the pecking order and can do no harm. This is what’s created a 6thmass extinction — privileging ourselves over other species and landscapes. We do it every day in small, subtle ways and in massively overt ways. 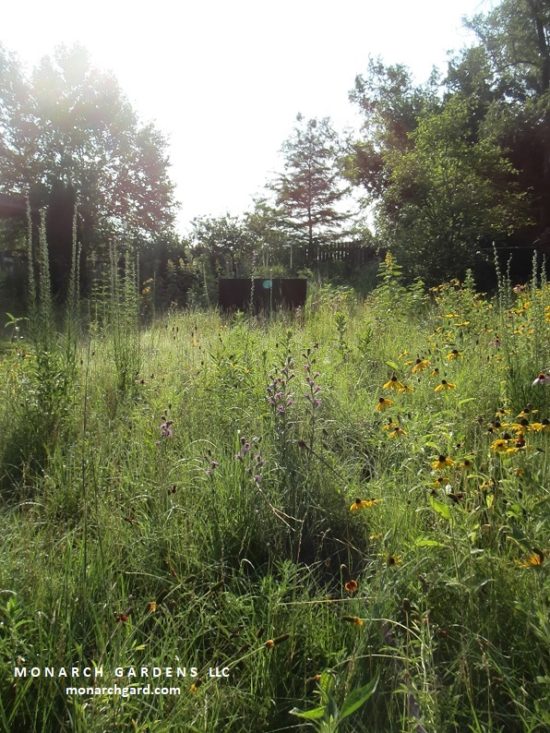 I was glad to read the chapter: More than Native Plants. Your sentence on p. 52 is magnificent: “Every place we touch is a garden, no matter its size, and the economic, aesthetic, and emotional lessons we learn in one landscape are practiced in others.”

This was my favorite chapter to write and research, chapter three; it’s the heart of the book, and I think out environmental crisis (and other crises, like race, gender, guns, etc). There’s a lot of psychology at play in how we view ourselves, one another, and the world around us. There’s a lot of guilt and shame. There’s a lot of self-defense that’s totally genetic and human and natural that we have to understand, identify, and process more thoughtfully. For example, when someone proposes native plants instead of hosta, it’s easy to feel defensive because we’re being exposed to new concepts that both feel constrictive and carry greater ramifications for the environment, and those ramifications influence how we perceive ourselves as acting or thinking ethically. Change is hard — learning new ideas is hard (especially when they go against the cultural / social default). Emotionally and psychologically evolving as fast or faster than the changes we are forcing on the plant is really hard, if not nearly impossible.

But your red cedars aren’t aggressive thugs, right? I like them, too, but boy do they destroy our prairies. It’s all about regional context, and in the U.S. there’s lots of nuance. We burn trees in Nebraska, we don’t hug them.

And there are the useless plants… I don’t agree with your statement: “Gardens composed of both native and exotic plants constitute a precarious balance.” (p. 83) I am NOT grief stricken, although you might argue I’m in denial.

Yes, I would argue that. Denial is one of the five stages of grief, and processing grief is both an exercise in preserving the self and accepting the new self that is forming. It’s a conundrum we carry into our landscapes — our emotions dictate a lot of what we do behind our fences. 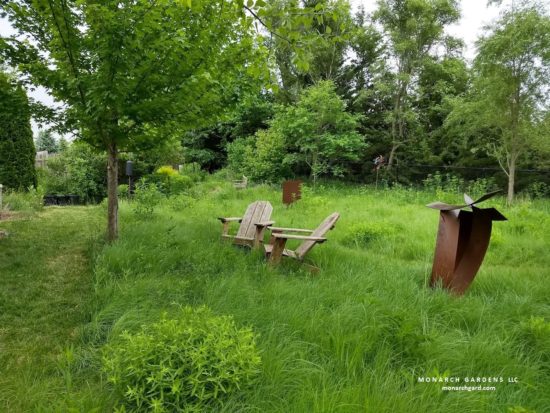 I love daffodils and peonies, among many other non-beneficial plants. I get your point and respect your radical approach. I know you don’t think there’s a perfect world as long as humankind is here on earth.

Oh I wouldn’t go that far. I firmly believe humans can be part of a thriving, balanced, biodiverse global ecosystem. But as is — given our extraction-based cultures that privilege humans — it’s not working. And the argument that nature will find a way is sort of bogus — I don’t want to live, and I don’t want my kids to live — in a world where nature is in the process of finding its way. Drought, famine, disease,  dirty water, no fish, plastic in every bite we take… We could still be in a relative Goldilocks era if we woke to the world right now.

I’m glad you threw a bone to the American Society of Landscape Architects (ASLA)for promoting a planting spectrum that includes a large % of native plants.

Meanwhile, I’ll continue to plant challenging exotics and natives that I am curious to grow. I will endeavor to try and be more attentive to what’s under foot and around me.

I’ve got tons of natives, even a faux prairie, but I’m a one-trick pony. I’m a plantsman, far from a naturalist. You’ve encouraged me to dig deeper. Microbes are in my future.

Go go go Allen! We’re all taking steps even if I wish (and other species wish) they were much larger and were at more of a brisk jog’s space, if not a hard sprint.

My favorite chapter was Urban Wildness and Social Justice.  You made me think of Thoreau leaving Walden Pond to take his laundry to his mom.

“(If we expect to be selfless”… p.120). Louisville needs to work harder (p. 125). My friend, Louisville tree activist, Mike Hayman is planting trees as fast as he can. Mike is the role model I suggested for you. Talk about selfless!

I hope you’ll keep pushing harder, even when you hit headwinds.

It is very hard because it seems that all I hit are headwinds; such is the role I’ve apparently chosen for myself.

I know you’re working your way toward your dream of your own prairie compound.

But don’t turn your back on the people, and the soulless suburban gardens, you might leave behind.

On the other hand, an ascetic life has some appeal.

I still design urban and suburban meadow gardens for clients, some of whom are removing their front lawns. I am desperate to live on a prairie away from mowers, to create an oasis among the corn and soybeans. I don’t think I’d live ascetically, only as a way to restore and revive my soul so I could have the energy and focus to ramp up to get back into the fray. I am a massive, massive, massive introvert, and it’s still going take me a lifetime to discover how that’s a strength and not a liability. 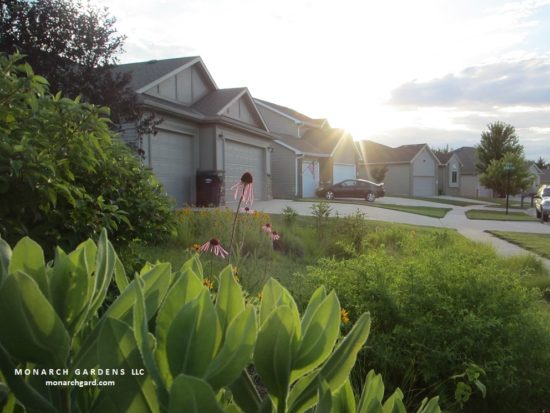 While I was reading your book, I was also reading a book of essays by Wes Jackson, whom I admire tremendously. Your earnestness reminds me of Jackson.

As I have argued, I think your most convenient prey (prairie novitiates?) might be your neighbors. They can’t be more intransigent than the rest of built America. You could do prairie grass roots door-to-door?

Have you seen my yard? https://www.houzz.com/projects/1968383/front-yard-makeover

I know you’re working your way, eventually, toward your own prairie farm. If you do, I worry you will be turning your back on the people and the wretched suburban gardens you leave behind. However, I understand. Life as an ascetic has always had some appeal for me.

Can you become both a missionary—hunker down and save souls in the suburbs—and escape, as Thomas Merton did, to a cloistered outpost and write down, as it was said about Merton, every thought you have. (You’re a very good writer!)

Merton could be as petulant as he was gifted. He remained a constant pain in the ass to his abbot at the Abbey of Gethsemani.

Maybe you will become the artist, activist, pain in the ass and save souls.

I hope so! 🙂 We all need to be bigger pains in the ass. Especially if those asses are the right ones (you know who I’m talking about).

You’ve got options and a bright future.

You’ve written an absorbing and provocative book that reminded me of the cultural unraveling that Wendell Berry described in Unsettling of America.

That’s high praise indeed! You know I’m a Berry Fan. Thank you, Allen, for an insightful and warm conversation. Let’s have more of these in the garden world.