It’s called the ‘Mostoller Wild Goose’ bean.  Sarah Mostoller found the first seeds in the crop of a wild goose that her son had shot in a mill race in Somerset County, Pennsylvania, in 1865.  Sarah planted the rescued beans the following spring and found them to be a particularly productive pole type whose harvest proved excellent for baking.  A specialist in rare beans obtained seed from her great grandson in the 1970’s and in 1981 he in turn donated some offspring to the Seed Savers Exchange in Decorah, Iowa.  And now the Seed Saver’s Exchange is sending a sample to Svalbard, Norway to be stored in a tunnel 500 feet beneath an icy mountain just 800 miles from the North Pole. 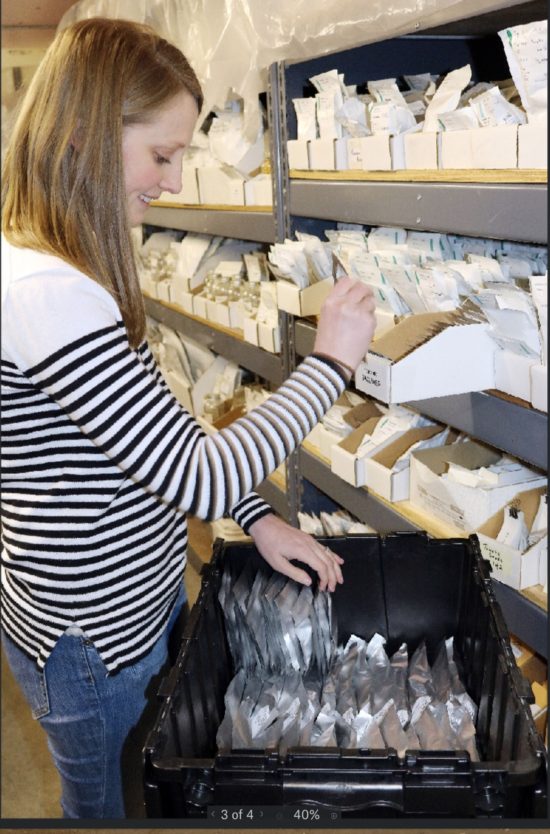 This bean is just one of 2,000 collections that Seed Savers has sent for safe keeping to the Svalbard Global Seed Vault.  Impressive as this number is, it represents only a small portion of the 20,000 varieties of heirloom food crops that Seed Savers Exchange has collected over the last 45 years. In a world of increasing agricultural uniformity –  over the last century, the United States has lost as much as 90 percent of it food crop cultivars – Seed Savers Exchange has been a leading advocate for biodiversity, preserving some 20,000 varieties and cultivars that otherwise would likely have become extinct.   Aside from the unique flavors such collections provide, they also offer adaptations to different climates and soils, and often disease resistance that could prove invaluable in the future.

In the past, Seed Savers has preserved its collection in its own vault in Iowa and at the U.S. Department of Agriculture seed bank in Fort Collins, Colorado.  Svalbard, however, provides a whole new level of security against the loss of diversity due to natural disasters, the effects of war, and changes in global farming practices.  With its dry atmosphere and permafrost, Svalbard naturally provides near ideal conditions for seed preservation, without risky dependence on refrigeration.

Seed Savers Exchange maintains rights to the collections dispersed to Svalbard and Fort Collins and continues to maintain its own collection in Iowa.  Members of the public can order seeds and plants from the Seed Savers Exchange catalogue of over 600 varieties; members have access to an exchange list for sharing and swapping thousands of seed types often unavailable anywhere else.