At my town’s film festival last weekend I met a filmmaker just out of USC film school whose masters project had been accepted by (and then won an award from) the festival. The short film – True Colors by Bethann Morgan – is the scripted true story of Sally Fox, the plant breeder who invented a naturally grown and dyed cotton that’s strong enough to be machine-spun and is therefore marketable. Her path to plant-breeding glory naturally ran into global competition and pushback from the Cotton Board – the lobby for conventional growers of white cotton, the kind that needs lots of pesticides, bleaching and dyeing.

This student film – funded largely by the Alfred P Sloan Foundation, which supports science education – opened my eyes to the harms caused in the production of white cotton, and introduced me to an inspiring young female plant breeder who never gave up.

There’s no trailer for True Colors but I did find this old Smithsonian Institution film about Fox and her research, which began in the ’80s. One interesting detail among many is that green and brown cottons deepen in their coloration with wear and washing rather than fade like conventionally dyed cotton.

More recently, there’s lots online lots about Fox, heralding her as “legendary,” for example, in this article.

Her early inspiration is detailed here:

The story goes that she began weaving around the age of 12, buying her first spindle with money from babysitting jobs. Sally studied biology and entomology in college, then traveled to Africa with the Peace Corps to help develop natural ways to fight disease-causing pests. This exposed her, for the first time, to commercial fertilizers and pesticides.

Returning to the US, Fox got a job as a pollinator for a cotton breeder working on pest-resistant plants. There, she discovered some cotton seeds that were pest-resistant, but brown. So, as an experiment, she began breeding brown and, eventually, green cotton. She would select the best seeds that produced the longest fibers, replanting them time and again until she created two colored cottons that were long enough to be spun on a machine.

This article about woman inventors describes her $10 million cotton-selling business as “revolutionizing the industry.”

It was the best of both worlds – a more environmentally friendly product that was also turning a profit. After globalization forced most of the spinning mills to South America and Southeast Asia, Fox’s business took a hit, but she continues to make new naturally colored cottons to this day. Each new color takes about 10 years to produce – but, for Sally Fox, the patience is worth the payoff.

Yep, Sally Fox is  back in business. 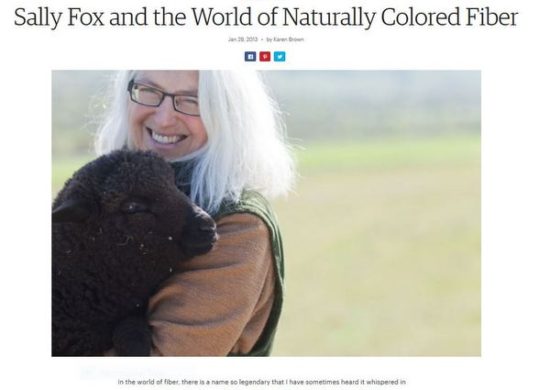