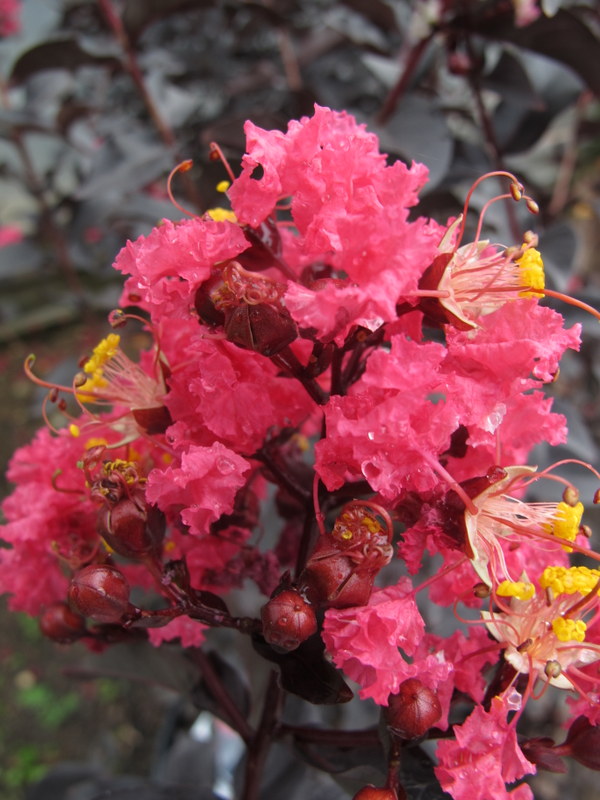 So having just returned from a favorite nursery with 17 new plants I didn’t really need – but couldn’t live without – my mind leans toward the phenomenon of impulse buying, if not Zen and The Art of Horticultural Maintenance.

Precisely what is it that triggers the mind to buy what the billfold really isn’t happy about?

Blooming directly before me was the perfect test case of that – a ‘Midnight Magic,’ crape myrtle, aka lagerstroemia, a word which always reminds me of accordion music in a German beer bar. The ‘Midnight Magic’ also comes with its own new-kid-on-the-block CIA code word: PILAG-V’ PP25, 925.

I’d been admiring its deep purple-maroon-burgundy foliage for months, but only as a busy passerby while wondering where all that foliage would lead in late summer. Suddenly the answer was right there: Dark screaming frothy pink.

Not necessarily the shrub for the horticultural faint of heart, but certainly the brightest guy in the room. Wearing pink, purple, maroon and burgundy. And I wanted it.

I do have many places for the more subtle summer colors, the white and pinkish caladiums and mellow yellow coreopsis and plenty of purchases to prove. The ‘Midnight Magic’ would have to go in an area where the other louts lived, or as an accent plant on the way to the tropical calocasia patch.

But in that moment – with absolutely no thought about where I would plant it, I just didn’t want it – I needed it! 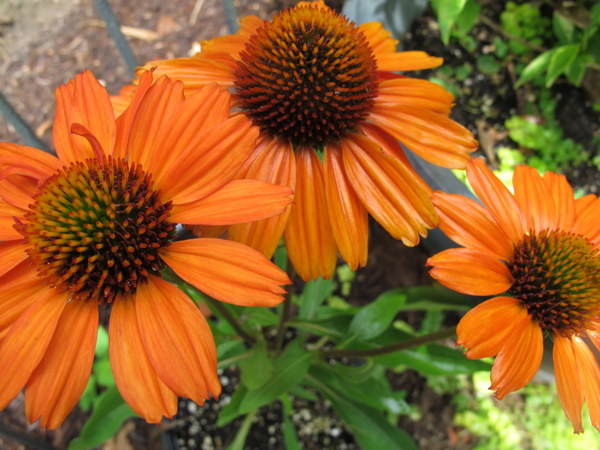 The same for another purchase on my more-vibrant whim list, the echinacea Supreme ‘Cantaloupe,’ which had all the orange subtlety of a traffic cone. Some days I lean toward the English garden, alive with salad mix of colors that speak but do not shout, and other days I want to hammer the landscape over the head.

Curiosity is also certainly part of my plant-picking process. There before me in the parade of 17 plants I couldn’t live without were three asters I had somehow not grown before:  Aster divaricatus ‘Eastern Star’ for the dry woodland shade, Aster macrophyllus or Big Leaf Aster for similar sites, and Aster tartaricus or Tartarian Aster, which booms to six feet, demands full sun and can grow as long and wide as a bathtub in about 20 minutes.

Frankly I wasn’t that crazy about the pictured flowers of the Eastern Star and the Big Leaf, which while attractive to the right bugs and happy in otherwise barren places, just didn’t look all that showy.

But along with that came the feeling I could be absolutely wrong about that. It would not be fair to pre-judge clusters of woodland flowers I had not seen, and I needed to give them a try.

Plant up or shut up.

The Tartarian Aster was a slightly different matter. I liked the photos and description of the flower. I had places where a nicely invasive plant blooming in late summer would seem to be the answer to an eight-acre, bare-space problem.

So, all told, I wasn’t sure about the flowers of two of the woodland asters, was pre-happy about the forecast size, color and range of the third aster – and I had never grown any of them.

I also just like asters, OK? I’d had good luck with the New England and New York asters, and I might even be willing to vote for a U.S. senator from at least one of those states.

After some investigation, I was both happy and terrified to learn the genus Aster once contained about 600 species in Eurasia and North America. That number has now been trimmed down to a mere 160, which means I’m only about 155 away from Complete Impulse Buying Aster Happiness, but my billfold wants nothing to do with that.

But moving on to 17 plants I did buy, the number included another favorite genus genre of mine, the variegated plants, be they perennial, shrub or tree.

This one was the sedum ‘Autumn Charm,’ another one of the CIA-numbered plants, this one Sedum telephium ‘Lajos’Plant Patent #14,421.

I have no rational explanation for a love of variegated plants. I just do, and that’s all I have to say about it. This one, according to the hired wordsmiths at Monrovia, is “a variegated sport of Sedum Autumn Joy. Light green leaves with a buttery white band on serrated edges on each leaf. A very stable mutation and incredibly showy. White buds open to rosy pink, then brick red tones develop in the flower-heads as fall arrives. Good winter interest.”

None of that buttery bluster was available to me when I bought two of those puppies. They were on sale for half-price and I just like variegated plants. 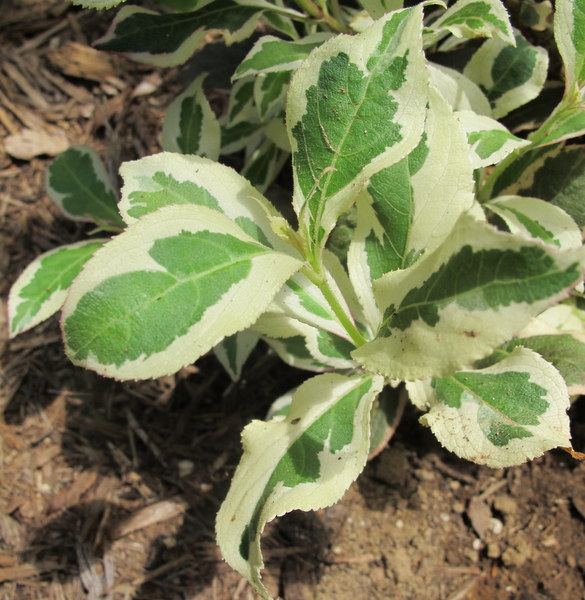 Also in the top 17 was Weigela ® ‘My Monet,’ the variegated, green and white, CIA dwarf ‘Verwig’ Plant Patent #16,824 – which now possibly means I’m 16,807 plants behind in buying new stuff. No surprise, the hired Monrovia wordsmiths labeled this one a “dwarf masterpiece.” I’ll stick with Monet’s “Woman with a Parasol.” 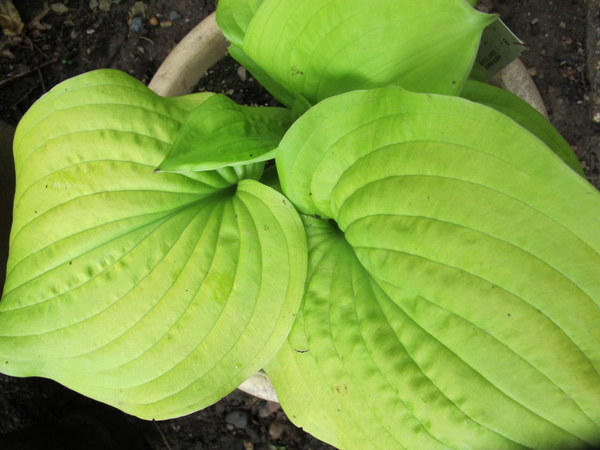 Moving on, there was the registered Shadowland ®’Coast to Coast’ hosta with that officious little ® in its name. It has thick, ruffled yellow leaves and I liked it. I really liked it. What else is there to understand?