Just in time for National Pollinator Week, my Garden Writers region planned a fabulous outing for members – to see the Penn State Trial Gardens near York, PA, especially their trials for pollinator plants. The goal is “to evaluate native species and their cultivars for attractiveness to pollinators and suitability for homeowner and agricultural use,” which is so great, exactly the information pollinator-friendly gardeners need.

The large Pollinator Trials Garden (above) was installed in 2011 by Master Gardeners, who planted 4,500 plugs of 86 species and cultivars – all natives to this region. We were told that’s because “a UC Davis study showed them to be four times more attractive to pollinators than nonnatives.”

Plants were chosen to provide a long season of flowering, with asters and goldenrods fueling the Monarch butterfly’s flight south. Early bloomers Packera aurea (Golden groundsell) and Zizia aurea (Golden Alexander) also play an important role, though they don’t show up as best-performers in the count of total visits.

Original funding for the trial was from the Pennsylvania Department of Agriculture, and the Xerces Society requested research on plants that would attract beneficial insects (especially the ones that kill stinkbugs), as well as good nector plants Monarchs.

All the plants were watered twice after planting, and then never again. 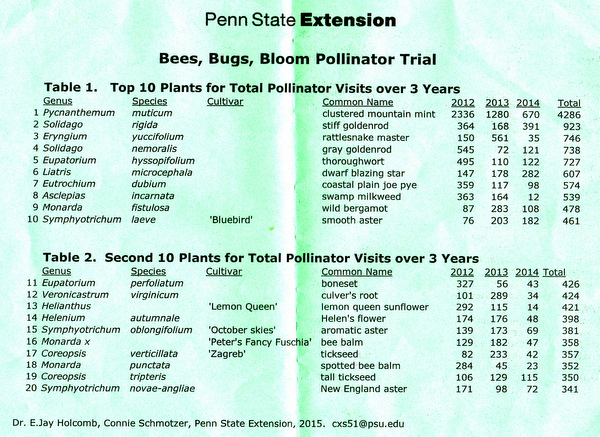 The findings are all here but first a caveat: the results were affected by the huge smorgasbord offered here, so results in average gardens may vary.

The best performers for the quantity and diversity of insects they attract are Mountain Mint and Stiff Goldenrod. 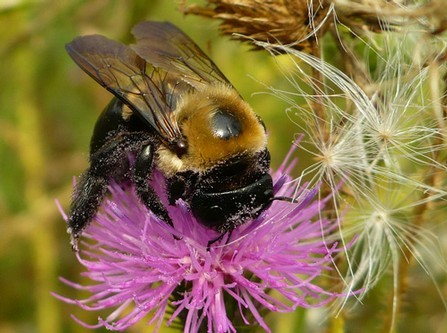 Best for butterflies is Joe Pye Weed, and planting a mix of Joe Pye varieties will provide blooms all season.

“There are no losers in this trial,” we were told, yet ‘Purple Dome’ might qualify as one because compared to the species aster, it proved to have no staying power in the garden.

While butterfly weed and swamp milkweed are generally excellent pollinator plants, they didn’t establish well on this site, so weren’t able to attract as many pollinators as other plants in the trial.

‘Zagreb’ coreopsis can’t compete with the species on the right.

According to another hand-out, “Some plants in the trial were easy to care for, as they covered the plot and required minimal weeding. Other plants seeded into neighboring plots. These plants would be ideal for larger sites where additional plants are welcomed.” So they’re tracking coverage rates and level of spreading, findings that could help the legions of gardeners who’ve read Planting in a Post-Wild World and want to implement its wisdom.

Solidago nemoralis (gray goldenrod) came out on top in the category “highest level of spreading. 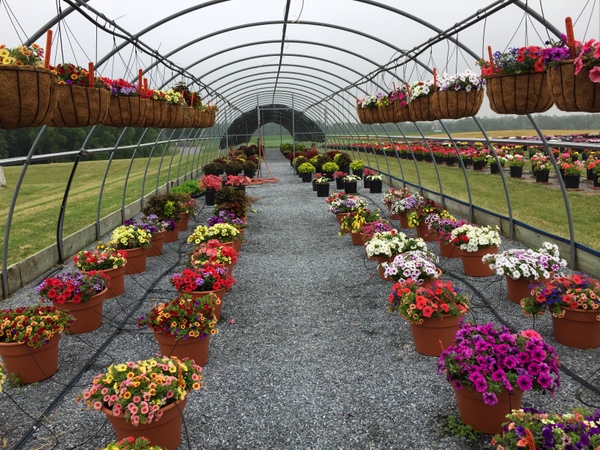 The traditional bread and butter of Penn State’s Trial Gardens are ornamental plants for clients like Proven Winners.

No one’s idea of a garden. This is research.

I was most interested in the perennial trials, where the best bloomers include ‘Rozanne’ geranium and ‘Violet’ achillea.

Open to the Public

Penn State’s Trial Gardens are open every day from dawn to dusk, from June 1 to August 31. Their top visitor days are the popular Summer Garden Experience on July 22 and Flower Trials Field Day on July 27.

I wore my bee shirt for the occasion.