The Mysterious Case of the Orange Petunia 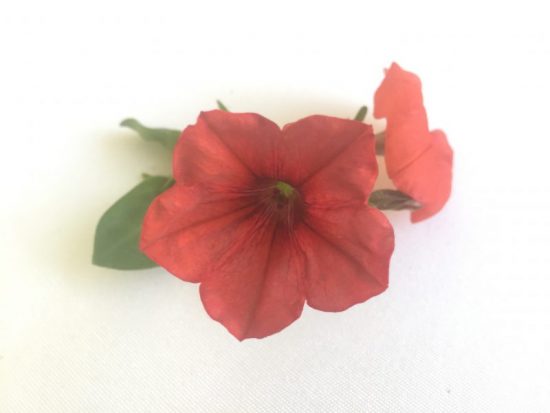 If you’re growing an orange petunia this summer, you may be one of the lucky ones. Or the afflicted ones.

Orangish petunias were taken off the market several weeks ago, in Europe, when a Finnish watchdog agency, Evira, announced they had discovered that the summer flowering annual had been genetically modified.

The USDA got on the bandwagon shortly afterwards.

(Elizabeth Licata reported the petunia irregularity, here on Garden Rant, on May 16th.)

Any genetically engineered (GE) or genetically modified organism (GMO)—food product or ornamental plant—is routinely forbidden in Europe, although exceptions have been allowed after thorough scrutiny proved there was no potential danger

Petunias have no natural orange gene. Now breeders are backpedaling, arguing that there was no mechanical gene splicing to produce the orange petunia.

One head-scratcher is the suggestion that the genetic transfer was windborne. The seed companies are claiming there has been no skullduggery. No gene guns were fired. Therefore, corn pollen, possibly possessing orange flowering genetics, got mixed with the petunia’s natural genetics—naturally.

Corn, Zea mays, is in the grass family. Petunias are in the deadly nightshade, Solanaceae, family. Such a gene transfer seems far-fetched. But if Monsanto can splice the corn earworm thwarting bacterium, Bacillus thuringiensis, into corn, then maybe a Sassafras can be bred to a pot-bellied pig.

What are the odds of that?

To produce an orange petunia would require expensively harvesting the orange gene and employing a gene gun for the gene transfer.

Or multiple companies were all downwind at the same time.

The gene transfer, by either gene gunfire or wind, would be the breeder’s starting point. The remaining effort would require a rudimentary understanding of Gregor Mendel’s bean breeding work—not to mention considerable patience.

It seems more far more likely that one breeder came up with the brainstorm for orange flowering genetic transfer. So, then, how would it be possible for so many breeders to come into possession of their own initial orange-flowering seed stock at roughly the same time?

This is an ongoing whodunit. The five-fingered discount (aka shoplifting) seems another possibility.

Could seeds have been stolen from an industry seed trial, for instance, where many breeders submit their prospective seed strains for independent judging?

Common thievery is nothing new in the seed business.

Even if petunia seeds were stolen—and I have no evidence that they were— it can take up to ten years or longer from the initial crossing between pollen and mother plants. It’s an expensive, long-term undertaking to bring breeding product to market.

But, in this case, something is going on. I’m not sure what? It’s not time to call in the Special Prosecutor, but I imagine the breeding companies, involved with the orange petunias, wish this would all go away. Plants and seeds have been recalled.

Or maybe this fuss is all being blown out of proportion.

How threatened should we feel of the outlawed orange petunia?

Allen Bush is the Director of Special Projects for Jelitto Perennial Seeds.