When a local Yahoo group was asked for ground cover recommendations for shade, these plants were suggested: Ajuga, Hosta, Pachysandra (native and nonnative), Epimedium, and Lily of the Valley, ferns, Hellebore, “some phlox, some carex,” Dicentra (bleeding heart), Sedum ternatum, Tiarella, Acorus, Asarum canadense (ginger) and “lots of spring ephemerals.”

But hey, isn’t a ground cover a plant that literally covers the ground, and not just part of the year? According to Wikipedia, “Ground cover is any plant that grows over an area of ground. Ground cover provides protection of the topsoil from erosion and drought.” I agree, and to accomplish that task, the plants have to BE there all year, which eliminates Hosta, Lily of the Valley, most ferns, Dicentra, and all spring ephemerals. 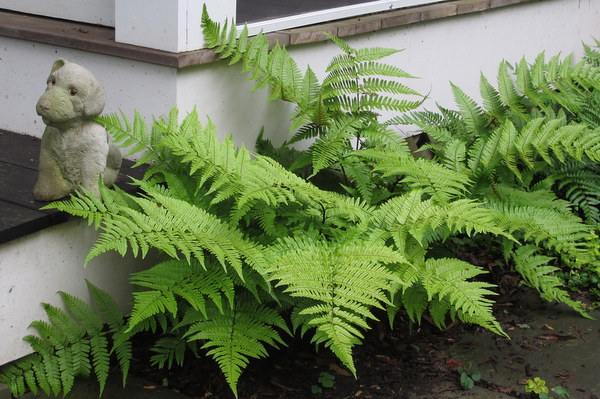 I was still silently ranting about the misinformation being handed out when a very meaty answer came from Carolyn Mullet, a local designer/installer with decades of experience choosing plants for clients. Her advice reinforced my belief that the very best plant-recommenders are the do-ers, especially design/install professionals. Here’s her list of “go-to ground covers for massing in shade that deer tend not to eat” – an extra bonus quality!

And to cover a big slope Carolyn would pass on perennials altogether and use plum yew.

Packera aurea in its first year in this spot.

Great list, but it doesn’t include my own, newly discovered favorites, which I got as passalongs from neighbors growing them on wooded slopes. They’re both evergreen, can handle full shade and some sun (with varying degrees of leaf-crispiness), fill in quickly but stay short, and serve as excellent skirts for azaleas and similar shrubs. Carolyn agreed that in her experience “both are wonderful.” 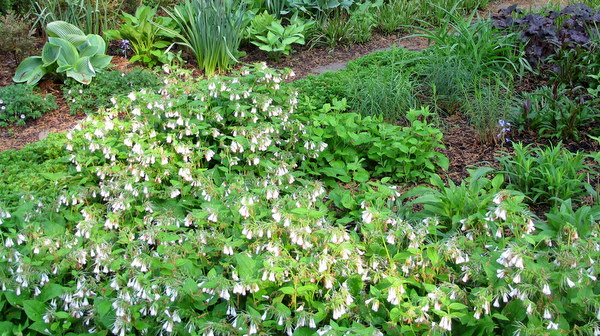 Of course some ground covers that do their job – spreading – are a problem in the wrong place and end up on one of the many invasive-plants lists that have been published. So one listserv-member urged: “Please do not plant Ajuga or the non-native Pachysandra. You may even regret planting Lily of the Valley. Use natives.” While I agree that planting Lily of the Valley is often regretted (and I sure regret that my next-door neighbor ever planted it in our adjoining border), Ajuga proved to be short-lived in my garden. And the only regret I’ve heard about planting pachysandras is that the native type simply doesn’t fill in, so save your money.

So I have another rant, an old one for me: Shouldn’t the alarming term “invasive” be qualified as to location and conditions? For example, “Don’t plant adjacent to wooded areas,” or “In wet spots, will overcome other plants.” And shouldn’t pleas like “Please don’t plant” at least back up the concern with a link to a local and respected source of information? None of the ground covers mentioned here are on Maryland’s list of invasive plants but they could conceivably be on one of the 23 other sources of invasive-plant information recommended by the state’s Invasive Species Council, most of them national in scope.

No wonder there’s so much misunderstanding, and people are so afraid that adding  plants to their yards will do harm, when in almost every case planting more plants is a net-plus environmentally.