Watering tools I love, and why I hate the others

In honor of a day that doesn’t deserve it (the horrid Black Friday), here are some gift suggestions for the gardener on your list or your own list of wants. All my favorite gardening tools seem to be watering-related, and here are three that I recommend to anyone who’ll listen. 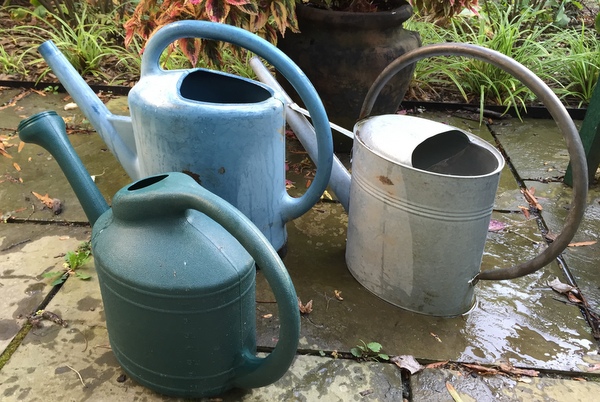 For me there are two huge flaws with many of the watering cans I’ve tried, one of them obvious and one a surprise when you get it home and try it. The obvious one is that the opening on top isn’t large enough to accommodate a garden hose nozzle, a problem with the can in the foreground here.

The mystery flaw with watering cans is whether they’re weighted correctly so that they don’t spill when you try to walk with them. The same flawed watering can above also is badly weighted and spills a lot. Shouldn’t there be a way to test cans at the store? Or even better, they could be designed correctly and then honestly advertised as “perfectly weighted.”

I’m happy to report that the other cans in this photo are perfect in every way. The metal one is even vintage-looking and surely one of the prettiest designs in design history.

Aren’t hoses the worst garden tools in the world? The “no-kink” types not only DO kink, but once that kink happens, the kink is somehow imprinted forever, just waiting to irritate the gardener again and again. Plus, they’re heavy and ugly.

So three years ago when I tried the Water Right hose and found it to be flaw-free I recommended it immediately. To recap, the 50-footer weighs just 3 pounds, versus 6.5 to 7.7 pounds for the competitors and 4.9 pounds for Miracle-Gro’s “Ultra Lite” version. (Ha!) Lightweight means easier on the gardener and on the plants that hoses inevitably get dragged over.

My other gripes about regular garden hoses is about the awful, stand-out colors they come in (because I want the focal point in my garden to be the plants, not the hose), and of course the damn kinks. Water Right’s olive hose is blessedly inconspicuous, and while their hoses CAN kink momentarily, the kink isn’t forever imprinted in the hose. 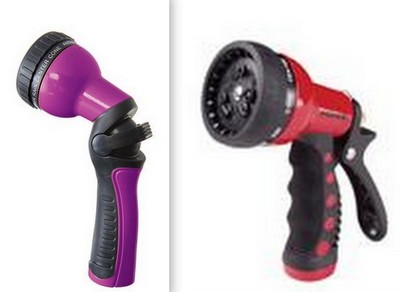 I’ve lost track of all the nozzles I’ve tried and hated over the years for so many reasons. They’re often difficult to adjust, of course, but even when they avoid that flaw, there’s another one lurking – requiring the gardener to hold down a trigger for the duration of the watering.

Here are two nozzles that I’ve tried from Dramm, with mixed results. On the right is the traditional trigger type that’s hard on my hands, plus I can’t just turn it on and put it in a watering can to fill up on its on while I’m doing something else.

On the left is one of Dramm’s fabulous one-touch nozzles, either of which I recommend. After adjusting the type of spray, you turn the water on or off or something in between with one lever, which then stays put without having to be held in position. This particular nozzle offers nine settings but that’s seven more than I actually use; just give me the shower and stream options and I’m good to go.

Tool choices are very personal, so I’m curious to know what works for you.