Getting my tropicals through the days of long shadows

Fall. A time of the year I love and hate. Love most of the weather. Love the clear blue sky and bright orange autumn leaves. Love the way it makes me want to start nesting. Hate the shorter days. Hate the weather on days that are cold and damp. Hate the frost and freeze killing my tropicals. But the time of the long shadows is inevitable. A necessary part of the cycle when you live in the Midwest. 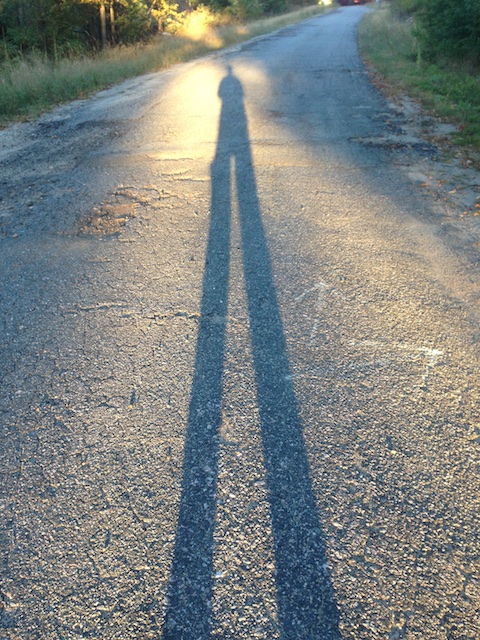 The death of my tropicals really irks me. Not actual death but the death of their time as the glory of my garden. Obviously it is my choice to make these plants such an integral part of my landscape. I could do sweeps of perfectly hardy perennials and perfectly functional shrubs. I could. But why the hell would I? Everybody does that. I chose quite some time ago to go my own way with my personal garden.

I wouldn’t have to save the tropicals. I could get new ones every year. But that seems wasteful. And expensive. Often they get bigger and better if you save them from year to year. That’s a real incentive to dig. And it’s great being able to say I’ve had a plant for years. Plus it seems wrong to just let them die when all I have to do is bring them indoors.

I’ll admit the last couple years I have looked out across the garden before all the frost carnage and thought, “No way in hell this year. They can all just die”. I have moments when I’m just done with it. No more frantically digging before frost. (I won’t dig after dark anymore! Get a blanket kitten. It’s gonna get cold.) No more cold wet muddy hands. No more packing plants to my office at work. No more hauling plants down the basement stairs. No more crowding kitchen counter space with plants in front of my only south-facing windows. No more, no more, no more.

I was really heading that way in early fall this year but we had a fall that lasted forever. A beautiful and long fall. After the initial dig of tender plants that cannot handle frost I had nearly a month to dig all the hardier tropicals. And I basically took the month. And did nothing. And then had to take two vacation days to get them all dug and put away before the low 20’s get here. For some reason it was surprisingly easy to get everybody tucked away. 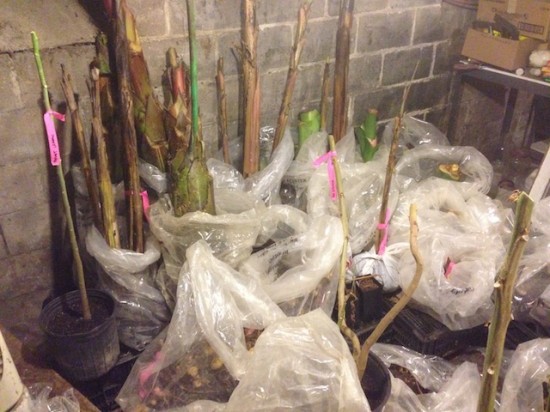 Easy except for this Musa ‘Saba’. 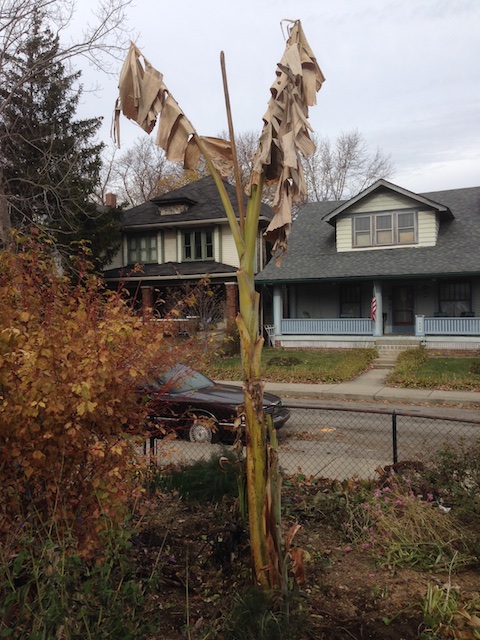 It was its third summer and it got too big for me to pick it up after I dug it. I had to call my neighbor, Jerry, to help carry the banana into the house. It’s spending the winter in the laundry room to avoid my nearly vertical basement stairs. I cut off the top so it would fit through the door. 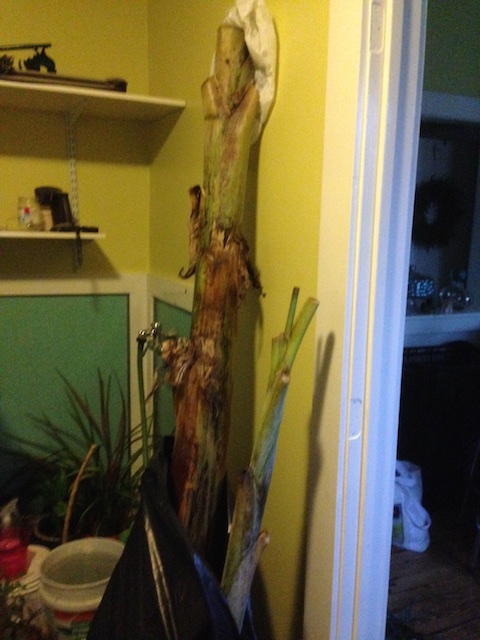 Anyway. I go along with my tropicals leaving some in the ground to see if they are hardy in truth. Some are. I quit digging Eucomis (pineapple lily) about five years ago. They self-sow. Zingiber mioga in both straight species and variegated forms have survived -14 with snow cover and weeks of 10-20 degrees below normal with minimal snow cover. Calla lilies are mostly safe. Amorphophallus konjac is doing fine. Oxalis regnellii ‘Francis’ returns. Colocasia ‘Black Pearl’ is spreading. Salvia guaranitica is still sold as an annual but has been perennial in our area for well over a decade. This includes the species and cultivars ‘Black and Blue’ and ‘Argentine Skies’.

In a mild winter I can get cannas to overwinter in the ground. We haven’t had one of those the last couple years. I used to be very careful with cannas, cleaning them, drying them, packing them in pine shavings inside of plastic tubs or cardboard boxes. Used to be. Now most get dug and bagged the same day. 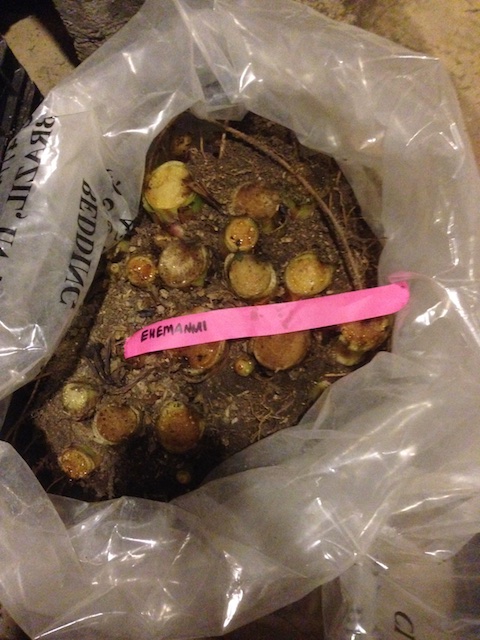 I do make an exception for Canna ‘Stuttgart’. I re-pot this grey-green and white variegated beauty in soil, for fear they will dry out, as they tend to have long runners. I will give similar careful treatment to newer or expensive cultivars.

I no longer coddle the bananas (Musa, Ensete, Musella) either. I used to pot them up. Makes it a much heavier endeavor when hauling down my basement stairs. Now they get a small root ball, dropped into a plastic bag, and off they go to their winter home. I can overwinter Musa basjoo and Musella lasiocarpa in the garden if I cage them and put a couple feet of leaves inside the cage.

The elephant ears (Colocasia, Alocasia, Xanthosoma) have been the most delicate over the years. When I fussed over them and potted them up to overwinter in the basement I lost more than I saved. Every year lots of rot. I believe I actually watered them after potting up. Doing that then going into the cool damp basement of my 115 year old house brought on plenty of death. Only the small corms and runners survived. Now they go into plastic bags appropriate for their size and that’s about it. I do Caladium the same way. Here’s a bulb crate full waiting to dry a bit before closing up the bags. 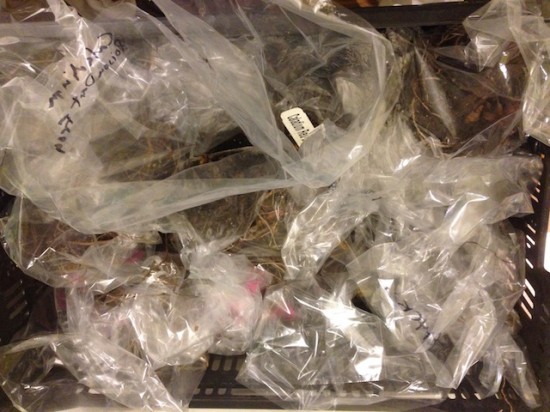 For the record, I am willing to pot up alocasias and keep them room temperature and dry. Except I did not do that at all this year. I wanted to push survival to the edge.

So here I am in the time of the long shadows again. The long wait for spring has started.

Irvin Etienne is the Horticultural Display Coordinator at the Indianapolis Museum of Art where he has worked over 20 years. He is the recipient of Gold and Silver awards in Electronic Media Writing from the Garden Writers Association for his blogging at the IMA. In his own garden everything from cannas to eggplants to Magnolias coexist in a lush jungle fed by manure from his own rabbits and chickens.