I have two bones to pick about gardens being destroyed or co-opted to honor the dead.  Yes, I’m going there. First, a national war memorial threatens to destroy an important landscape and second, a garden is used to remind visitors of a local tragedy, a situation that could happen anywhere.

The important landscape is Pershing Park in Washington, D.C., about a block from the White House. It was designed by a rock star among landscape architects – M. Paul Friedberg – and updated by the famous local firm of Oehme van Sweden (featured recently on GardenRant). The sunny photos above show the park its its glory days, when the traffic-cancelling waterworks still worked, and the plants were alive and well.  I ate lunch there whenever I could. 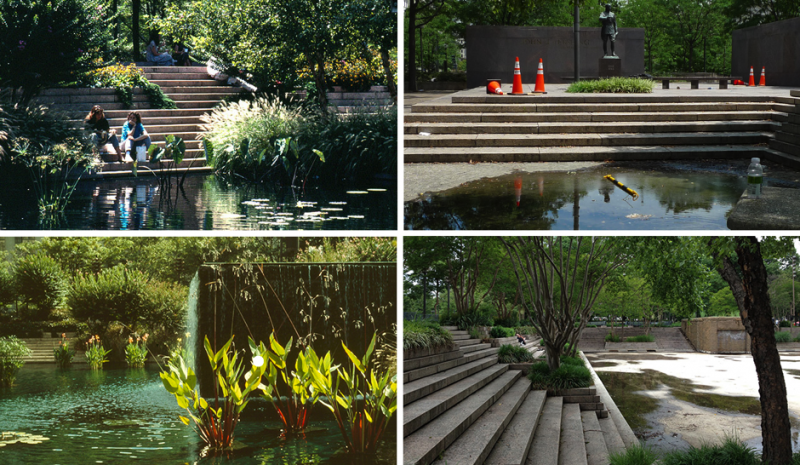 Above left, Pershing Park as it once was and right, as it is today. The Washington City Paper called it a “ghostly place.”  Today the fountain is broken, the delightful chairs and tables that once graced the park have been replaced by concrete benches, and the plantings and sunken water garden are long gone.

But instead of repairing and maintaining the park, Congress has decided it should be turned into yet another memorial to war – this time World War I.  This city already has two memorials to that war (including this one, recently renovated) but some see the need for another. Five designs have been chosen as finalists for a new WWI Memorial on the site, and they all call for demolition of the existing landscape.

Instead of, say, fixing the place, adding a new plaque about WWI, and saving money.

Thankfully there’s a national organization that cares about preserving significant landscapes like this one – The Cultural Landscape Foundation – and it’s hellbent on saving it. “Pershing Park is Threatened” tells the story, including how to help.

Issues here include the perennial problem of neglecting maintenance, the relative ease of raising funds for something shiny and new, and decision-makers who don’t value our “cultural landscapes.” 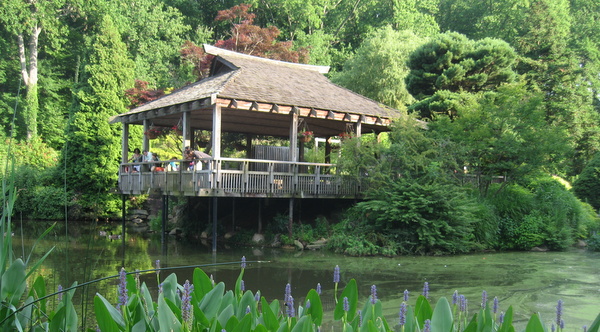 Another local garden I love is Brookside Gardens, Montgomery County, Maryland’s public garden, which includes this serene spot on its 25 acres. My beef is with what county leaders decided to place at the other end of this lake: 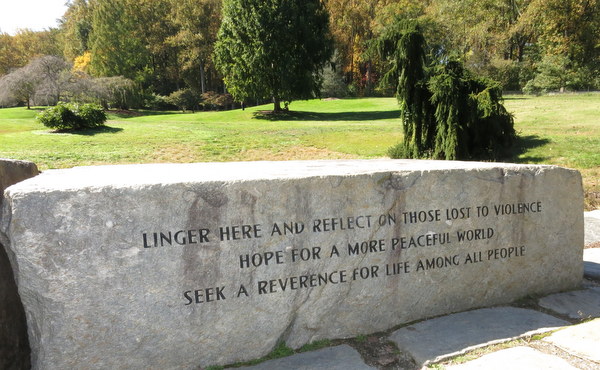 And below, an account of the months in 2002 when locals feared death by sniper shooting as they went about their daily lives. 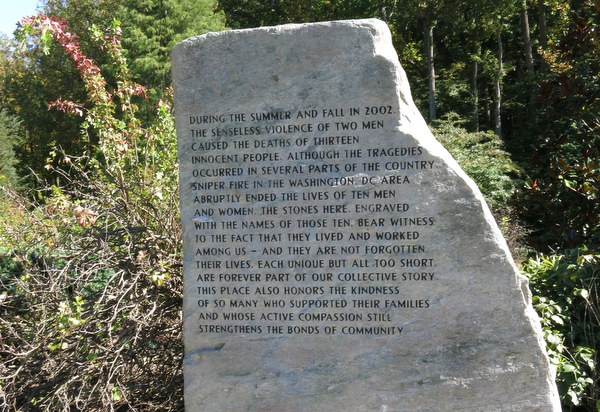 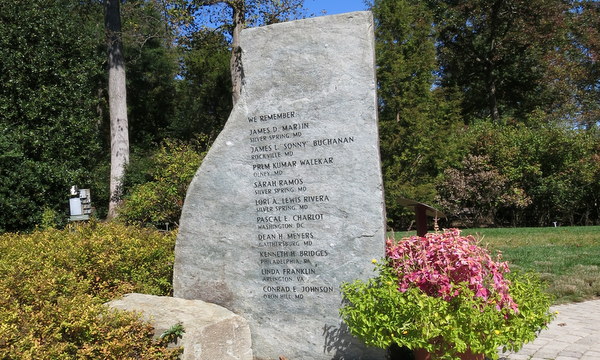 And here are the names of the victims.

Of course I understand that the families of victims – of war, of random violence, of terrorism – might want a special place to remember their loved ones, and what prettier place to do that than in the nearest public garden?

But what about all the other garden visitors, who just want to spend time in a beautiful place and not have to “reflect on those lost to violence?”

Is the solution to create new places especially for remembrance? That would cost more, of course, and that’s probably the rub.