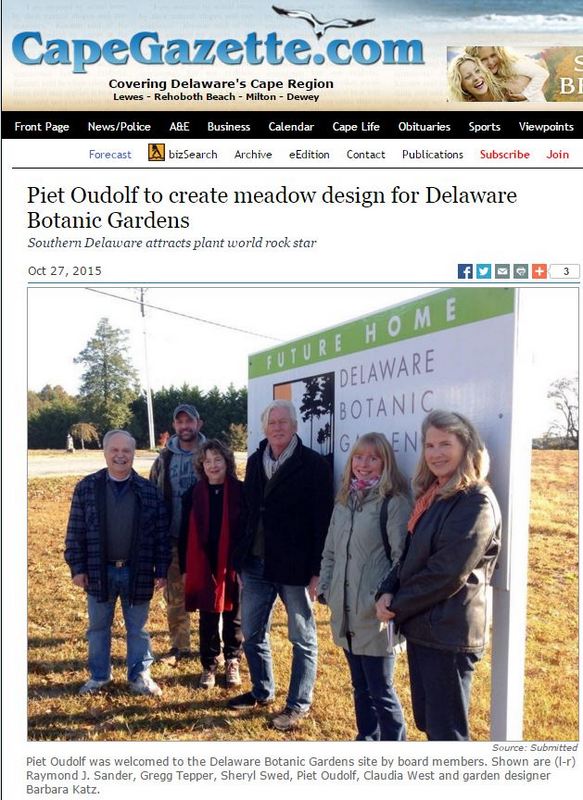 Big news from Delaware? Yes, and it’s not about Joe Biden at all, though top Delaware pols are involved. The news is that the Delaware Botanic Garden (now under development) WILL include a meadow by none other than Piet Oudolf.  This story in the local press makes it official, and plant people here in the Mid-Atlantic are going a little nuts over it.

The Cape Gazette explains why:

Few examples of the Dutch plantsman’s designs can be found in the United States, making a Delaware meadow by him a remarkable draw. In addition to the High Line, notable U.S. examples are at the Battery Park gardens in New York and at the rooftop Lurie Garden in Chicago’s Millennium Park.

“This will change the face of this project,” said Katz. “This will bring people from around the world.”

A high priest in the native-plant ecological movement, Oudolf is a rock star in the world of natural and progressive landscape design.

The Katz quoted there is DC-area designer Barbara Katz, shown on the far right in the photo. She’d heard a talk by the new garden’s Director of Horticulture Gregg Tepper and was so psyched about it, she suggested to her new Facebook friend Piet that he get involved. So this is a success story for social networking, as well as in-person networking by plant-lovers.

I also heard Gregg talk about the project and was impressed by its origins in 2012 and how much has already been accomplished. Michael Zajic, former public garden horticulturist in the DC suburbs, had moved to Delaware and decided the area needed some gardening resources and horticulture education. It didn’t take long for a nonprofit to be formed, an awesome board of directors and advisory group to be assembled (including Delaware’s First Lady), DuPont foundation money to be targeted, and 37 prime acres to be “purchased” for $1 a year. Oh, and they hired former Mt. Cuba horticulturist Gregg, who’s spreading the word and turning everyone who hears about the new garden into a true believer.

I won’t retell the whole story but instead send you to this blog post by my pal John Boggan, who has followed the project closely, compiled terrific photographs of the site, and whose husband Dan even filmed the site by drone! Here’s a still photo of the site from the drone video: 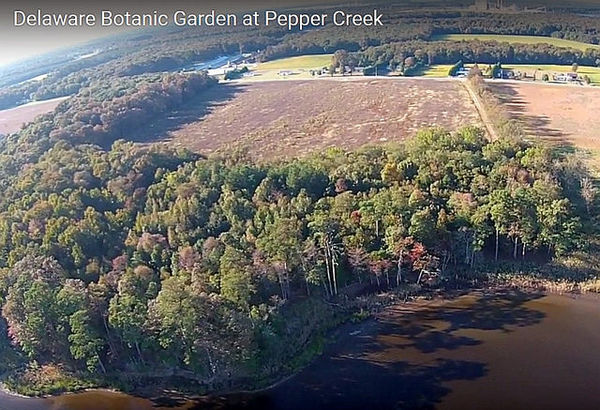 Notice that Piet Oudolf isn’t the only garden-world luminary involved in the project. Others whose names you might recognize include U. Delaware professor Doug Tallamy, former director of the U.S. Botanic Garden Holly Shimizu, and Baltimore-based horticulturist Claudia West, whose recent book with Thomas Rainer is already making waves.

When I visited Holly in her Lewes, Delaware garden recently she insisted I visit the site of the new botanic garden while I was in the area. So glad I did! Gregg gave me a tour and took me to lunch and now I’m hooked on the place and everyone’s ideas for making something wonderful there.

One portion of the garden is expected to open in 2017 but the entire garden is a decade-long endeavor, and I know that gardening teaches us patience but I’m feeling anything but patient about its opening. It’ll be one of very few botanic gardens of its kind, with Maine’s Coastal Botanic Garden its only counterpart in the East.

I know I’m not the only one predicting that the Delaware Botanic Garden will help put the Mid-Atlantic region on the eco-tourism map (Delaware already has a terrific “See You Outside” campaign). It’s perfectly situated to attract beach-goers, too – close to Rehoboth and other Delaware beaches, and Ocean City, Maryland – and city-dwellers in Philadelphia and DC, both a two-hour drive away. 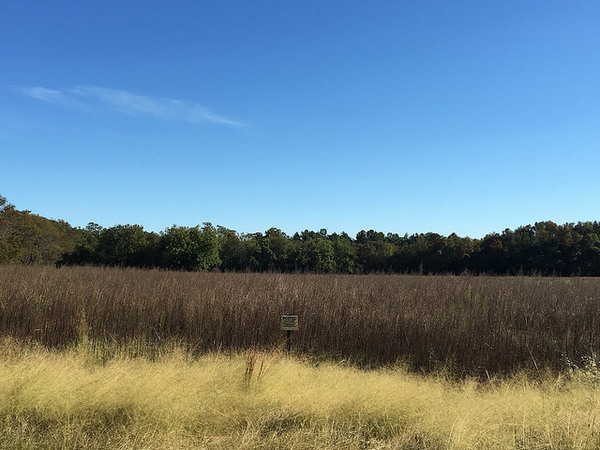 And I have just one observation to add from my own site visit and it’s of interest to lawn-replacers and reformers everywhere. The photo above (by John Boggan) is how the site looks from the road, showing two years of change from soybean production to undesigned meadow. Gregg told me he’ll be mowing about a third of the meadow, the part closest to the road, because the neighbors hate the look.

So it isn’t just suburbanites who are slow to adopt this look.  But maybe minds will change and eventually this mix that includes Goldenrod, Asters, Little Bluestem, Lovegrass and Eupatorium will look just right to not just eco-tourists but neighbors, too.