At Emory Knoll Farms, a New Garden by Ogden, Snodgrass and Uebelhart

Ogden, Snodgrass and Uebelhart is not a pricey, litigious law firm. O.S.& U. was a garden collaboration, solidly rooted on terra firma, stretched across three continents. The O.S.& U. principals, led by axis-averse Australian garden designer Mel Ogden, are artists, visionaries and seedsmen. 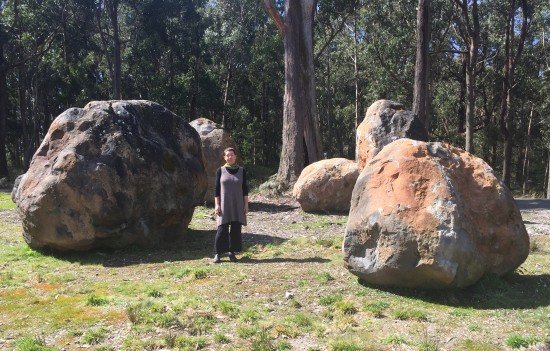 Mel Ogden at home in South Bullarto in Victoria Australia. Stones up to 50,000 LBS.

Ed Snodgrass is a progressive nurseryman, author and leading green roof consultant at Emory Knoll Farms in Street, Maryland. Georg Uebelhart is a talented seedsman and my boss at Jelitto Perennial Seeds in Schwarmstedt, Germany.

How were these stars aligned?

The garden O.S. & U. created at Ed Snodgrass’s Emory Knoll Farm began spontaneously one day in April 2014. Ed explained: “Mel was visiting and we were sitting around and decided to get out the Bobcat and tear-up this space.” 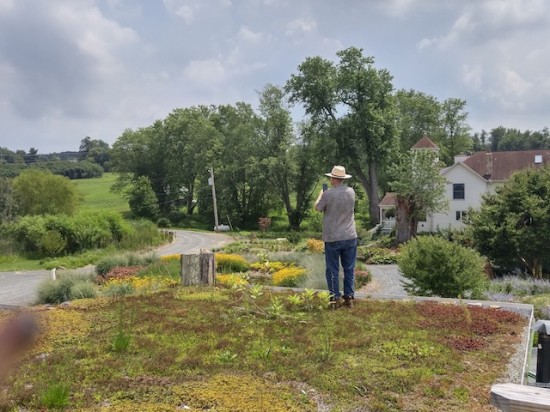 Ed Snodgrass on top of the barn green roof, looking down on the Island Bed. Mary Vaananen photo.

But this doesn’t mean Ed and Mel stormed out of the house higgledy-piggledy. Ed had thought about the project beforehand and had come up with a few practical ideas for the new garden. While often the design goal is to force water out of a space, Ed wanted storm water management that forced water into the garden.

And secondly, he wanted to connect the water runoff from the green roof on his barn, to the barn garden, to the new island bed, to the streambed below. In water management jargon, this is called a treatment train.

And why not have some fun?

A discussion with Uebehart began while Ogden and Snodgrass were taking out trees and scraping off turf. “It would be cool to plant the garden with everything from the Jelitto catalog,” Ed thought. “And even better if the garden is paid by revenue from Jelitto seed production.”

Mel confirmed, “Ed is good at that sort of thing.” 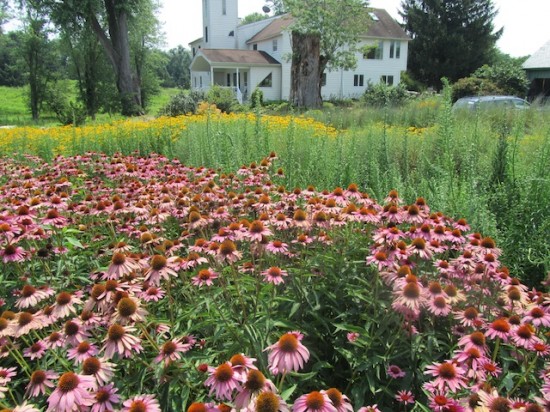 Part of the garden concept was to showcase some of these Jelitto seed items on the nursery tour of the 2015 Perennial Plant Symposium.  Mel’s plans were sent to Uebelhart who suggested suitable perennials and plant spacing for the island bed.

Jelitto’s Georg Uebelhart had already sent seed to Snodgrass in the winter of 2014. Ed’s staff germinated the seed and eventually small plants were lined out in orderly, straight rows for seed production.

In addition to Green Roof Plants, Ed’s nursery and consulting business, he grows nearly 25 different seed strains for Jelitto on the farm that has been in his family for five generations. (Chris Speno, a Jack of many trades, very capably oversees the seed project.) 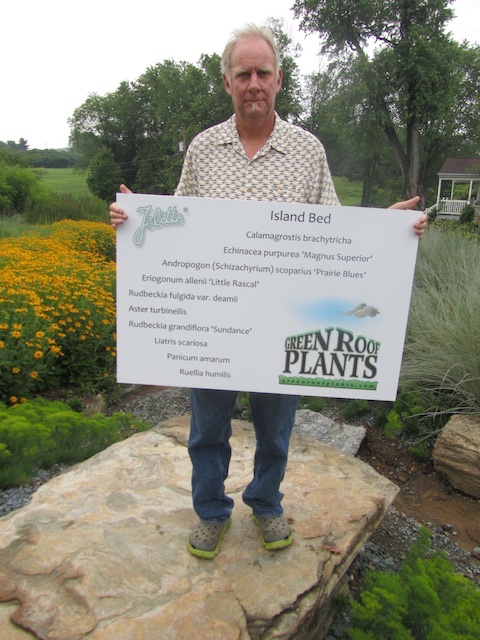 Ed Snodgrass in the Island Bed.

A selection of ten Jelitto items was planted in the island bed during the spring and continued until September 2014. The new garden at Emory Knoll was a throwback to Baltimore’s first PPA symposium in 1987. 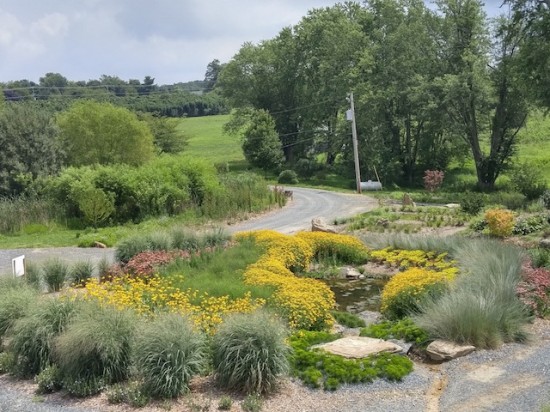 Ed and Georg first met at Kurt Bluemel’s in 1987 when the PPA nursery tour came to Bluemel’s.  Ed was managing Bluemel’s nursery, and Georg came over from his native Switzerland to intern for a year. Uebelhart left Bluemel’s for Jelitto in 1988 and resumed his career in the seed business. (He had collected seeds of wildflowers in his native Switzerland as a teenager and distributed a simple seed list with the come-on that he could beat the Jelitto seed prices.) 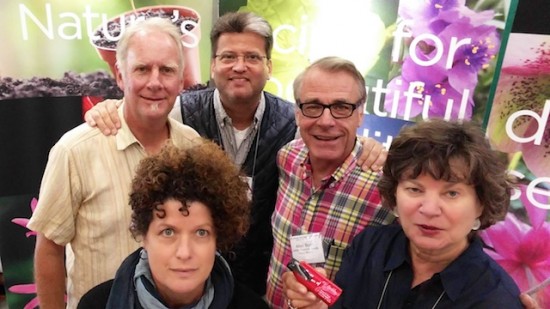 I first visited Bluemel’s nursery during the 1987 PPA nursery tour. Bluemel, besides his skill as a grower of ornamental grasses and perennials, was a landscape artist. I had heard rumors that there was more to grass than Cannabis. And Bluemel was already in the forefront of ornamental grasses. Here I saw for the first time a garden with dozens of large groupings of Calamagrostis, Miscanthus, panicums, purple cone flowers and black-eyed Susans.

Bluemel’s friend Wolfgang Oehme was now working with Jim van Sweden.  The Oehme & van Sweden garden at the Federal Reserve building was a mind blower on the tour that week, too. Oehme and van Sweden had created a garden that looked like a meadow—sleight of hand.

The ground was shifting underneath me, all previous notions of English garden supremacy shattered.

Bluemel, van Sweden and Oehme were seasoned, talented and well into middle age. This didn’t seem to dim their relentless ambition or their creativity. Bluemel and Oehme had learned lessons growing-up in Germany, taking cues from designer and writer Karl Foerster.

Mel Ogden was not working from Karl Foerster’s, Bluemel’s or Oehme’s playbook, though they were kindred spirits. Mel’s inspirations flow from sculpture, Japanese gardens and the land art of Robert Smithson’s spiral jetty and David Nash’s planted works in Wales. 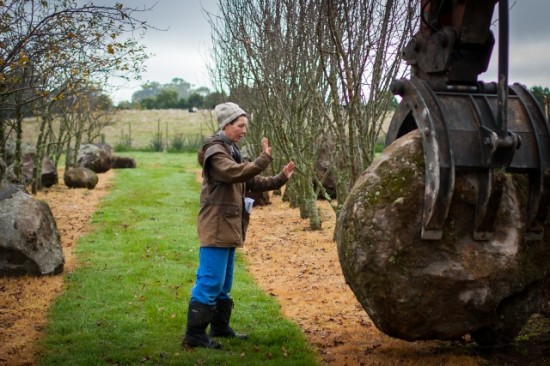 Mel’s lines are more organic than classic. She prefers fluidity with her lines rather than an axis.

Mel tries to isolate and enclose a space and enjoys working with rocks and large boulders. Her Australian gardens vary in size from small courtyards to 100-acre restoration projects.

“I’m searching toward a simple, concise statement that has a nostalgic feel.”

This past July’s PPA tour to Emory Knoll Farm turned out to be a huge success. Perennial enthusiasts enjoyed Ed’s green roof displays, the plant production houses, the seed fields and the O.S.& U. garden. 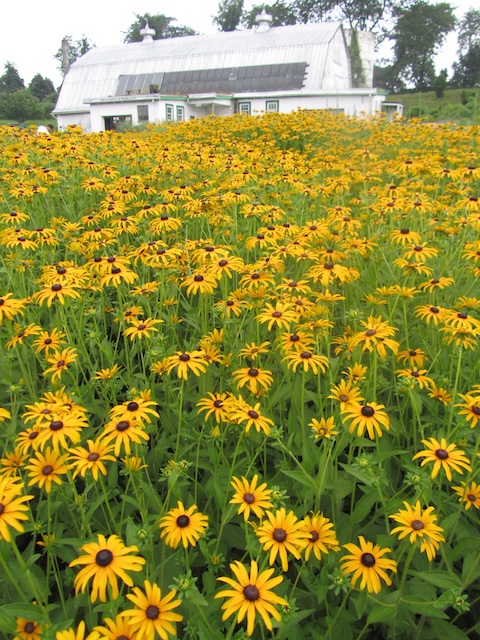 Rudbeckia deamii. “…Find it, buy it.”

Rudbeckia deamii caught some eyes. There’s nothing new under the sun with this black-eyed Susan, but it’s gaining ground as a more disease resistant alternative to Rudbeckia ‘Goldsturm’. Allen Armitage, following the tour, sang its praises on Facebook: “Attention all, Rudbeckia deamii, my choice for the new ‘Goldsturm’…Find it, buy it.”

The low-growing, yellow blooming, bee loving Eriogonum allenii ‘Little Rascal’ a native Eastern North American ornamental buckwheat, was a surprise to a lot of folks, too. 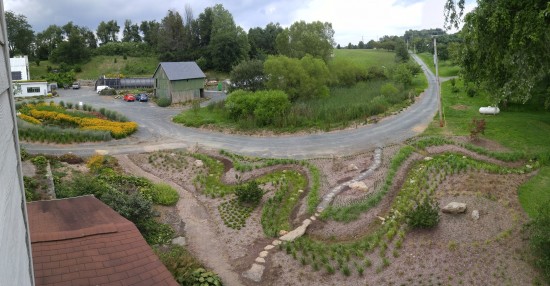 Looking down on the stream garden from the second floor. Island Bed to the left. Mary Vaananen photo.

Mel was back in Australia by then, missing the fun in person, but Ed and Georg were at the farm to take a much-deserved bow.