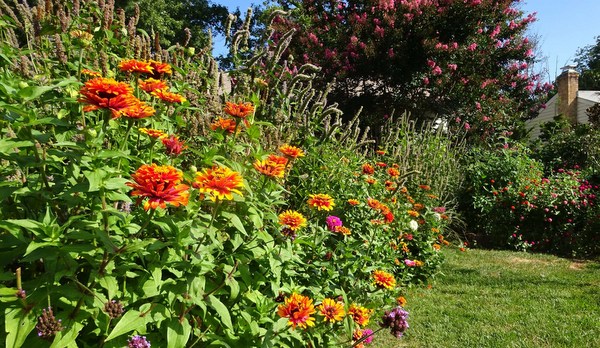 One of Marcia’s zinnia rows, a mix for a variety of pollinators. Her vegetable garden is located behind the zinnias.

A recent guest post in defense of butterfly bushes prompted the usual debate (natives v. exotics) but also this wise comment by an avid wildlife gardener:

My yard is filled with native flowers, shrubs and trees. However, the surrounding area is not, so giving them something extra that blooms for a long period of time with the help of water and deadheading is alluring to the insects. Currently, here in Maryland, it is the driest August since 2006. Flowers are few and far between and young trees are stressed.

Offering single bloom zinnias and buddleia along with the native aster, sedum, and goldenrod, offers much needed sustenance right now. The sterile Agastache Blue Fortune is teeming with bee activity while the native agastache are going to seed. My added fruit table is devoured by butterflies, flies, ants and bees and the hummingbirds hang out above it.

I offer natives, but the zinnias and buddleia, and fruit are attracting big time this August. I think we can do both.

That’s from Marcia van Horn, whose fabulous pollinator-friendly front yard we admired in this video and whose amazing campaign to increase the population of bluebirds is described in “How to Grow Bluebirds.”

So I asked Marcia for more information about Zinnias and their role in providing for pollinators, and she responded with photos, videos and tips.

So what ARE the right kinds of Zinnias? 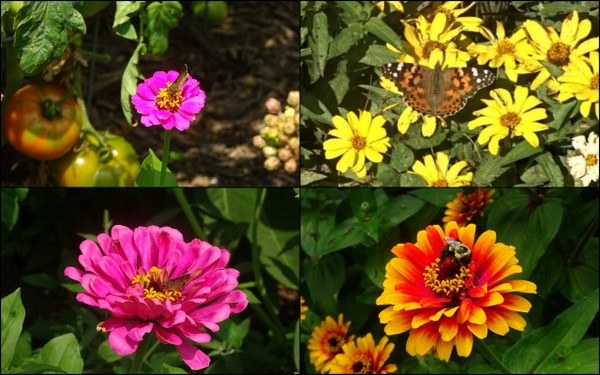 Marcia directed me to more information about the Zinnia marylandica species, which describes them as blooming prolifically and growing to 12-18 inches. They’re more compact and bushier than standard zinnia varieties – without pinching – and they’re heat- and disease-tolerant. They need a half day of sun or more.

Marcia has found that nurseries often carry ‘Zahara,’ ‘Profusion’ and ‘Pinwheel’ Zinnias and no others, which is fine because even one of these types will do the job – for shorter varieties – but it’s the taller ones that attract the most pollinators.

Now for Marcia’s growing tips: “Buy the seeds, plant indoors and later transplant, or start them in the ground. If you’re serious about aiding the pollinators into the autumn, then deadhead, fertilize, water; then do a second seeding the first of July or transplant in mid-July.”

The pollinators Marcia has noticed at her zinnias include butterflies, bees and moths, but there’s more. Scroll down in this article by the Brooklyn Botanic Garden to “butterfly favorites” for a list of insects they attract. 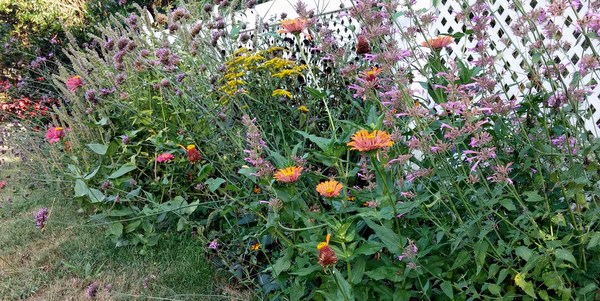 Above, a mix of pollinator-friendly plants in Marcia’s neighbor’s yard, including zinnias. Marcia explains:

My neighbor has a fenced garden that had nothing planted in front of it. I look out my front window at the fence. I asked if she would like a pollinator-attracting flower garden that would be of benefit to  her vegetables behind the fence (and which would benefit my view). She said, “Sure.” Along this small fence you will now find plants for the entire season: salvia, agastache, rudbeckia, verbena, solidago, and added zinnias that will be bright until frost and will bring out the color of the other plants and draw the eye even as they fade, one of the benefits of adding zinnias to the garden.

Honestly, my own new pollinator garden is mostly a bust, so next year I’m all in for zinnias.