This guest post by Susan Rademacher is a fond reminiscence of garden makers Jim van Sweden and Wolfgang Oehme on the 25th anniversary of the publication of Bold Romantic Gardens. 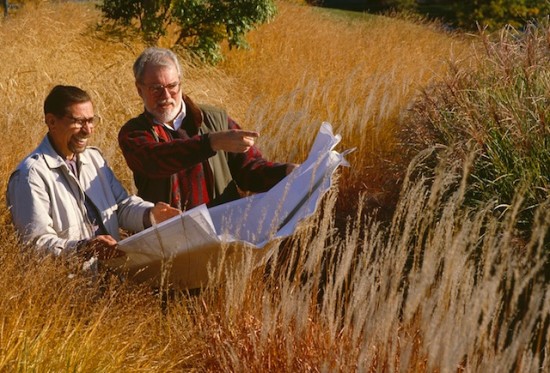 After 25 years, I can still recall the boyish enthusiasm that bonded Jim van Sweden and Wolfgang Oehme in creating the oeuvre of OvS. It was seductive, like their very sensory gardens, and made the creation of Bold Romantic Gardens an absolute joy.

Already, I am slipping into superlatives. I can hardly help myself. Jim and Wolfgang were each superlative in their highly individual ways, and they were unabashedly certain – richtig! — when it came to declarations of beauty and fabulousness.

We met at a conference of the American Society of Landscape Architects in the ballroom of the Washington Hilton in the early 1980s. It was the early days of the surge in gardening across America. I was an editor at Landscape Architecture magazine, which had begun to cover residential landscape architecture with a series of special editions. These led to our launch of Garden Design magazine, where my esteemed colleague Norman Johnson insisted that I meet Oehme van Sweden.

I had been schooled in the garden traditions of the Old South, of classic forms and tidy aesthetics. So when Jim took me to see the Richard Helms garden, a small hillside swept with ornamental grasses and boisterous perennials, I was transfixed by the garden’s grace and tactility, and exhilarated with the sense of freedom it gave. With each new landscape we visited, Jim and Wolfgang opened their world and generously invited me in.

As I began writing about projects in the District of Columbia and in Baltimore, I was filled with a mounting excitement about the top to bottom sweep of their work. No level of attention was spared, from the organization of one’s experience of place to the most subtle details of stone joinery or the backlit inflorescences of Panicum virgatum ‘Haense Herms’. When Jim and I were studying photographs for the “Building” chapter in Bold Romantic Gardens, we came across a picture of Jim’s showing a treillage shadow pattern as it fell on a brick wall. He said of the design, “…it’s obvious that you’ve got to design it far enough out and with a backdrop of the right colors to show off the shadow at night, and also during the day with sunshine.”

What made them so right for the moment was their fluid wedding of horticulture and architectural structure. Horticulture was the element missing in so much of residential landscape architecture, and structural design was the missing element in much of popular gardening. Oehme van Sweden leapt across these gaps with a bravado that thrilled clients and readers.

Together they forged an extraordinary union of design that liberated the American garden through a melding of wonderfully unique personas, gifts, and skills. “Curiosity brings us together,” they wrote. “We have found that rarest of creative visions – a true collaboration…..Always, we are refreshed by a dynamic meeting of the minds, based upon shared values and diverse experiences.” From Wolfgang, especially, came the deep knowledge of horticulture, ever lusting to expand the palette, adoring plants throughout all seasons of life, planting so fast that his hands were a blur. When I asked him how the patterned masses of herbaceous plants would be maintained, he dismissed the premise of the question, eyes glittering, and said, “Let them fight it out!” This was perhaps the most liberating gardening advice I ever received. He was inspired by Heine, Goethe, and Schiller— forged in Germany’s post-war reclamation of its landscapes through park making and set free in America to lead a crusade.

From Jim, especially, came the deep pleasure in the beautiful, exacting attention to detail, and inspiration from other artists and places as wide ranging as Helen Frankenthaler and Roberto Burle Marx, Amsterdam and Kyoto. Jim could be as plainspoken — “If you’re going to place a bench, then give it a place” – as he was poetic – “Out of vast, unknowable nature comes the freedom to form new thoughts, or to notice some tiny wonder for the first time.”

Jim found his way to landscape architecture via architecture and city planning. As an architecture undergraduate, he discovered that it was the spaces in between that excited him, so he entered graduate studies in landscape architecture and went to the Netherlands to complete his degree and connect with his Dutch roots. As in Germany, city planning was thriving in that devastated post-war landscape, and Jim was introduced to” garden design on a big scale” when he worked with the renowned Professor Jan Bijhouwer on a greenbelt project. It was Bijhouwer who also provided an introduction to Wolfgang Oehme upon Jim’s return to the United States. Driven to see results, Jim eventually turned from city planning to garden design when he co-founded Oehme, van Sweden & Associates in 1975. Fittingly, Bold Romantic Gardens is dedicated “To the memory of Professor Jan Bijhouwer, who brought us together.”

The book presented 15 years of practice, and pointedly included both private residences and public spaces. The Federal Reserve Garden, they wrote, marked a significant milestone in their development. “Designed for easy maintenance, it returns a garden ethic to the public landscape. It shows how gardens are possible for all the people who don’t have the opportunity to enjoy gardens in private life.”

It was a great privilege to write this book with them, and to work with their superb colleagues on this project. It was clear from the beginning that the book was to be beautiful and substantive, with no hesitation to reveal trade secrets. It opens with the chapter “Inspirations,” which gave their backstory and laid out their fundamental principles of naturalism, ephemerality, romance, transformational experience, bold scale, and easy maintenance. Jim was especially keen to contribute a work of lasting value to the profession of landscape architecture. Thus, the book is well endowed with plans, sections, construction diagrams, plant lists, and a guide to maintenance practices. The book itself is a mirror of their masterful garden design, which starts with the big picture and seals the deal with exquisite attention to detail. That marvelous and satisfying tension between the robust and the refined was what Jim’s title for Bold Romantic Gardens, was all about.

And good pictures. The firm’s photo archives were extensive, and many wonderful hours were spent at the light table searching through slide after beautiful slide. On one occasion, as Jim and I were talking about commissioning night time photography for the book, he imagined how the Rosenberg penthouse garden could be shot. He mused, “It would have to be specially lighted and taken just as the lights come on in Midtown, during the week when office buildings are lit. You know how Manhattan is, with the streaks of light through the street, coming down 69th Street from Central Park, with this view of the skyline in the distance and that wall, the sculpture, and the dining table at the end set up for dinner, with beautiful china and crystal, sparkling, and then, out there, Manhattan. Augh!”

Jim and Wolfgang’s marriage of opposites brought forward work that melded bravado and tranquility, strength and subtlety, exuberance and restraint. Together, through their work and their partnership, and captured forever in Bold Romantic Gardens, they created richly rewarding places for both public and private lives.

Originally published by The Cultural Landscape Foundation on May 20, 2015.

Susan M. Rademacher is the nation’s first urban parks curator and has focused on restoring, enhancing, and creating public spaces since 1991. A Harvard University Loeb Fellow and new honorary  member of the American Society of Landscape Architects Architects, she is the former Editor in Chief of Landscape  Architecture and Garden Design magazines. Her most recent book is Mellon Square: Discovering a Modern Masterpiece (Princeton Architectural Press, 2014).

On October 17, 2015  The New American Garden: The Landscape Architecture of Oehme van Sweden a landmark traveling exhibition of Jim and Wolfgang’s work, sponsored by The Cultural Landscape Foundation, will open at The National Building Museum in Washington, DC. Here’s a link to the Kickstarter campaign.