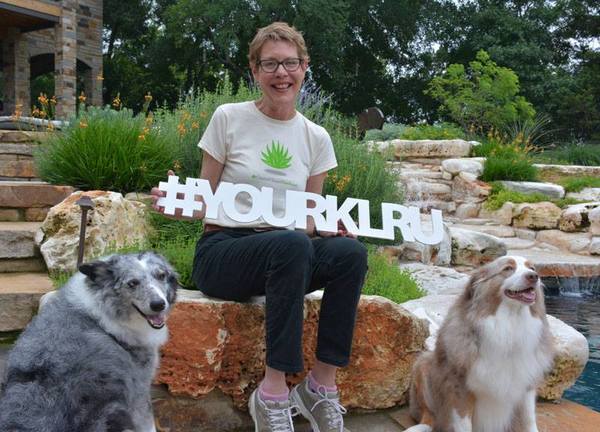 While in Toronto for the Blogger Fling I snagged some really interesting bus-mates for our day-long rides to gardens and events, and one was someone I barely knew but quickly became soulmates with – Linda Lehmusvirta, writer/producer of the Austin-based PBS show Central Texas Gardener.  After I got home I watched some episodes and was so impressed, I decided to follow up with a phone call.

About Linda
Linda’s About page is a fun read and answered most of my questions, like has she done gardening shows only? Not hardly. She has and continues to produce all kinds of content for KLRU in Austin, including working with lots of famous people and Texas newsmakers – like Ann Richards and Molly Ivins. That’s the advantage of being with a PBS station – it gives you a broad view of the world. Linda started at KLRU in 1983 and launched the award-winning Central Texas Gardener in 1989. 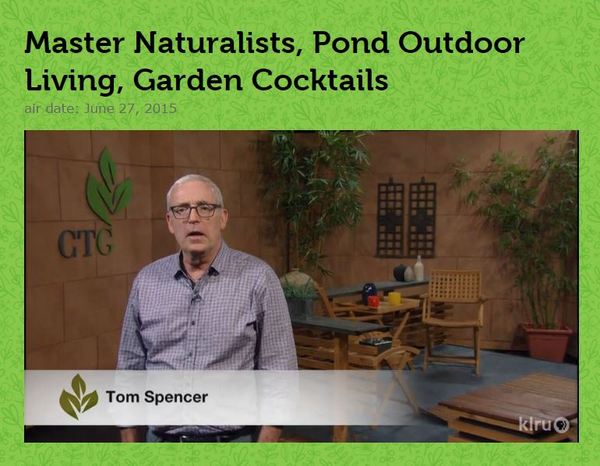 About Central Texas Gardener (CTG)
But it isn’t celebrities that excite Linda the most – it’s “snagging fascinating new people for CTG,” like an expert in aquaponics, which uses much less water and is becoming really big in Texas.  She looks for innovative people who want a “productive and beautiful place to live.” And years of feedback have convinced her that the show has impact – changing the way people think and what they do with their gardens. So, less reliance on pesticides, more people reducing lawn and gardening for wildlife.

Her ambition for the show is to “promote expression through gardens that value resources, wildlife and individuality.” I love that!

CTG spreads the word about local and state wildlife and native plant organizations and initiatives like Certified Backyard Habitats. Authors from across the country claim jumps in sales and recognition after a broadcast.  (I found lots of familiar authors, including our own Amy Stewart, on the show’s Youtube Channel.)

-Viewers trust the people appearing on the show – real gardeners, not professional “talent.” They tell stories about their own gardens, 90 percent of which were not professionally designed.

-While the show has a clear pro-environment philosophy, it guides rather than preaches. “We don’t say ‘Bad, bad, bad!’ and we’re not ardent vigilantes. After all, gardeners aren’t mean people and this isn’t ’60 Minutes.'”

– She engages with the viewers.  For example, people email her all the time with questions, and she actually answers them, even if it takes calling Extension experts or researching online to do it. She hangs out at nurseries, asking questions of customers to find out what information they need. (E.g., what’s the difference between compost and mulch?)  She asks viewers to send in photos of their gardens and those photos are shown on the show, the website, or via social media.  Combined, those channels broaden the reach and viewer engagement by a lot.

CTG produces 36 to 38 new programs each year on a modest budget. Linda’s the producer/writer/editor, a job that involves lots of contacting, arranging, networking for topics, taping gardens, and creating final content for studio guests. She also does all the website content, including a really good blog, and plenty of social media. For everything else – the host, director, and crew – she hires freelancers. The host of the show is gardening expert Tom Spencer.

How to Have a Great Gardening Show for My/Your Region

Of course I want a show like CTG in my area and asked what it would take to make that happen. Unfortunately, most PBS stations don’t have room in their budgets to simply take on a new show they might like, even one as potentially impactful as a good regional gardening show. So it’ll probably take finding the funding first, then approaching the station with a pilot.

A 30-minute show like CTG could be made for a bare-bones budget of $1-2,000 per episode, with no travel. And Linda suggests finding an enthusiastic host for the show, one who could put a spark under people just taking up gardening and the gardening-curious.

With my passion for public gardens, I asked how the show helps the gardens there in Texas. In lots of ways, apparently.  CTG has featured many public gardens and “works constantly with the Lady Bird Johnson Wildlife Center” there in Austin.  Other local resources and events promoted on the show include local garden tours, Master Gardeners, and the Garden Conservancy, for which Austin’s tour has been the top money-raiser in the U.S.

New Media
So how have changes in media impacted the show? As a PBS station they still have to follow broadcast standards, but viewer videos are welcome. We’re seeing them regularly these days – weather videos and most noticeably, videos of police interacting with the public – as people become citizen videographers, even citizen activists.  Along with blogs and social media, communications are becoming more democratic and more online, with “broadcasting” meaning less. For CTG, the online platform allows 24/7 viewing, anywhere in the world.

Linda told me she’s exploring how to help more viewers create and contribute their own garden videos, something that people are still nervous about, so she might produce a video teaching people how to create videos.  Cell phone videos are fine if the phone is kept steady and held horizontally.  And don’t bother using the microphone on the camera.

A great contribution to the show would be viewer videos of their garden projects before, during and after – something that would require too many location shots with a crew to be feasible for her staff.  Then in the studio she could do the editing and voiceover. Another idea is to have “web extras” to the broadcast show for the show’s website.

A big thanks to Linda for her ideas and for 26 years of Central Texas Gardener! Now I just have to find a Linda local to me, and the moolah to make “Mid-Atlantic Gardener” happen.