Don’t go see “A Little Chaos” for the gardens 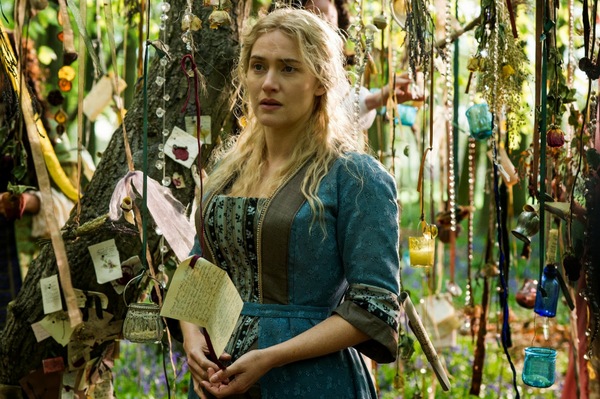 A movie about the gardens of Versailles starring Kate Winslet opens today! Imagine my excitement when one of the many publicists who contacted me about it invited me to a free screening.

It’s titled A Little Chaos and here’s the synopsis: “A romantic drama following Sabine, a talented landscape designer, who is building a garden at Versailles for King Louis XIV. Sabine struggles with class barriers as she becomes romantically entangled with the court’s renowned landscape artist.”  (Um, isn’t a “landscape artist” someone who paints them?)

I was intrigued by the title, promising the theme of chaos versus order, with chaos presumably championed by the Winslet character. She’s shown above in her own funky garden, seen only briefly in the film. Enjoy that shot – of a work of set design, not a garden – because it’s the only pretty outdoor scene in this movie about a garden and its designers.

The gardens at Versailles were indeed designed by Andre Le Notre, a character in the movie, and they included an outdoor ballroom. That’s where history ends and fiction begins because the Sabine character commissioned to design it and everything else that happens in the movie is made up.

Fine. But with that much creative license, critics are wondering why the plot is so lame.  And I agree.  As a movie-goer I’d give “A Little Chaos” 2 stars out of 5, and feel generous at that.

As a gardener, I give it zero stars.  Here’s what the “garden” looks like for most of the movie: . 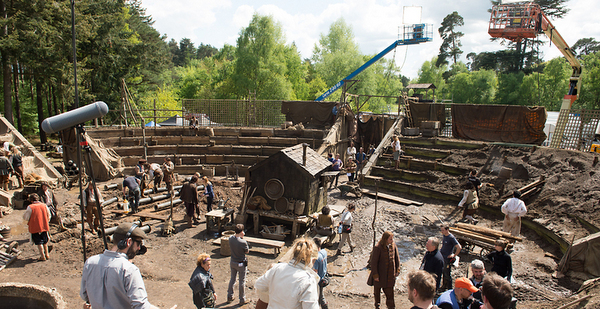 And after two hours of build-up we finally see the finished product, designed by this purported proponent of chaos:

See any plants? You won’t because the “garden” is actually a waterworks project. Here’s a close-up: 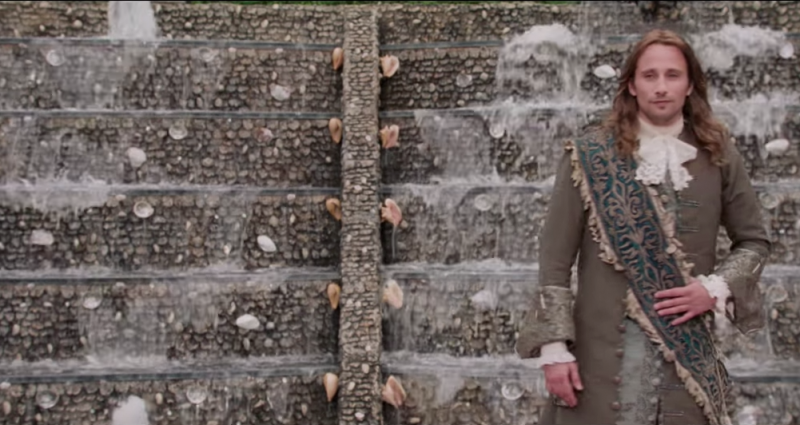 That’s the Belgian actor Matthias Schoenaerts, who plays Le Notre. He’s even more bland here than in “Far from the Madding Crowd,” another recent release.

At the screening I was sitting with garden writer Kathy Jentz, who nudged me to point out that the vines behind the actors in one scene were fake.  Where was the garden consultant on this movie about a garden? Or for that matter, the garden designer or garden historian?

As one reviewer noted:

Not that this film about landscape designers gives two shits about landscape design: The taming of Versailles’ vast and verdant acres is depicted through a few vague montages, Sabine and her employer consulting some briefly glimpsed diagrams while talking shop. Here, gardening is more of a metaphor for relationships, and the characters don’t miss a single opportunity to directly compare themselves to greenery. “Like a good plant, I submit,” Le Notre tells his new co-worker, who later echoes the sentiment by confirming her need to adapt, “like a well-trained plant.” In case the point hasn’t landed, Winslet also delivers the floral equivalent of that celebrated porch speech from Sideways, in this case instructing the king on the importance of warmth and attentiveness while nurturing a rose.

The publicists for the movie don’t know squat about gardens, either. I got a laugh from these suggestions for GardenRant, from a New York-based PR firm:

We’ve also been brainstorming editorial ideas, and we thought that your site would be a great fit for “Summer Garden Tips & Trends” or “Recreate Your Very Own “Versailles” Inspired Garden.” This feature would showcase “A LITTLE CHAOS” and list out some summer garden tips & trends, or ask your readers to create their own “Versailles” Inspired Garden” (as the film takes place at the gardens of Versailles).

Yes, readers. Why not recreate Versailles in your own backyard?