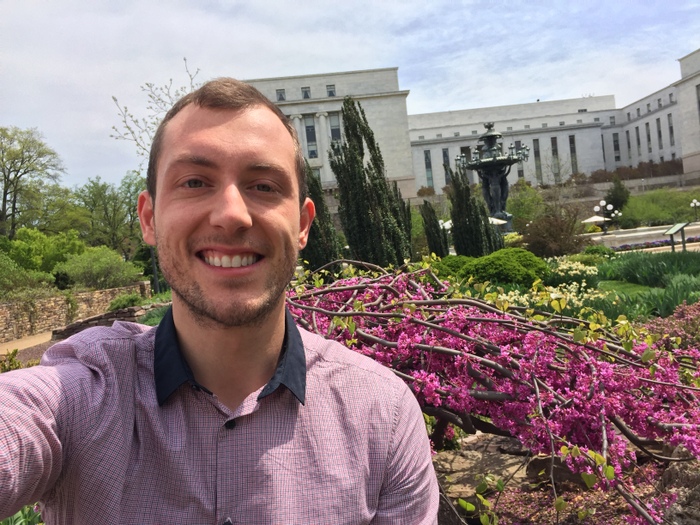 Devin Dotson in Bartholdi Park at the U.S. Botanic Garden

I recently met the new public affairs officer for the U.S. Botanic Gardens and when I found out his degree is in agricultural communications, I had to find out more.

Devin Dotson grew up in a small rural town in northwest Alabama, where his family grew their own vegetables and ornamentals on a half-acre lot. He took agriculture courses in high school – surveying, ag mechanics, plant and animal sciences – and got super-active in Future Farmers of America, which turns out still exists! In much of the country, at least.

And to my surprise, FFA isn’t just for livestock-raising. Members compete in such events as vocal quartets, string bands and public speaking, and Devin’s group won first place state-wide in all three. His performing groups were the official entertainment at FFA’s national conferences.

That’s Devin, second from the left.

Agriculture and music? Well, why not? And check out this video from 2013 – those kids can play!

On top of all that, at 14 Devin started working at his local newspaper and decided to pursue that path in college – until he was told that everyone is majoring in communications these days and he should do something a bit different.  Specialize.

So if your chosen specialty is communicating about plants, where do you go to learn that? Turns out, to one of the three or four schools in the U.S. offering a degree in agricultural communications, one of which is Auburn University right there in Alabama. Here’s how Auburn describes the degree:

So Devin enrolled there, took courses in ag and communications, while working on the school newspaper and in the campus Sustainability Office. As a volunteer he was Auburn’s Agricultural Ambassador, traveling the state to career days.

Next Devin went to the University of Florida for a masters degree in communications but again with a specialty – a combination of International Environmental Communications and Latin American Studies. (His other undergrad major had been in Spanish.) Devin’s masters thesis was about how journalists cover climate change in Chile. How cool is that?

His first job brought him to D.C., where he did communications for American Rivers for almost six years and got to write about water a lot but also plants in their role as green infrastructure. He visited the U.S. Botanic Garden regularly during those years and now says it’s “cool to be here on the back side.” Plus, he gets to continue writing about conservation.

Southerners Losing their Accents
Veering off-topic for a moment, I have to mention that you’d be hard-pressed to guess that Devin is from the Deep South from the way he talks.  So what happened to his accent? He explains that he did enough traveling in high school to experience people “looking askance” at him, questioning his knowledge, prejudging him based on his accent, so he decided to lose it. Studying broadcast journalism helped move him toward that accentless ideal of newscasters from Anywhere, U.S.A.

I couldn’t resist telling Devin about my own bout with anti-Southern bigotry when I left central Virginia to go to college in the North during the contentious Vietnam War years. Like him, I learned to enunciate – no more dropping those g’s! Unlike Alabamans, I’d never learned to say “fixing to” or “might could,” so didn’t have to unlearn those. But “y’all” is a conversational staple for all Southerners and neither of us is willing to give it up. It’s a damn useful word and far better than “you guys.”