Years ago I visited the Scott Arboretum to learn about alternatives to lawn and see the ones they were growing there. Last month I returned for another event but made time to revisit their lawn-alt plants, too.  (Wonder if we can get that term to stick.) 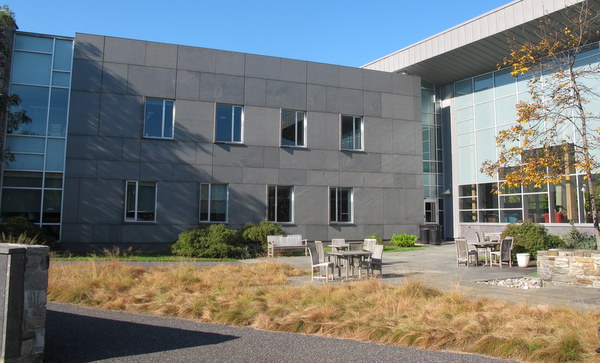 First, the Prairie Dropseed shown above, which my friends at the U.Maryland asked me to inquire about.  They want to know if the Scott Arboretum burns it and horticulturist Chuck Hinkle answered, “We burn the sporobolis beds in late winter when the students are on break. The nice thing about it is that it can be done relatively quickly. The grass doesn’t create a huge conflagration (like miscanthus!) and can be controlled easier.”  I’ll pass that along, though a non-fire answer was hoped-for (U.Md. isn’t allowed to burn.)

But it’s Carexes I was most interested in checking on.  That’s the huge genus, commonly named sedge, that’s so promising as alternatives to lawn in spots that aren’t walked on.  At Scott they’ve been growing a wide assortment of them, many of them donated by New Moon Nursery, whose owner James Brown “has been very generous and is trying to promote the use of lawn alternatives,” quoting Chuck.

Above, Carex pensylvanica looking horrible. Here’s Chuck’s explanation: “The Carex pensylvanica did very well for the first few years. However, as the site became shadier under the maple trees, the plants became thinner. I tried replanting the bare spots but there just wasn’t enough light for them to thrive. So even though they say C. pensylvanica takes shade, I would not recommend it for full shade. You can see areas in the same bed where it gets more light and is more vigorous.”

Below, looking much better. 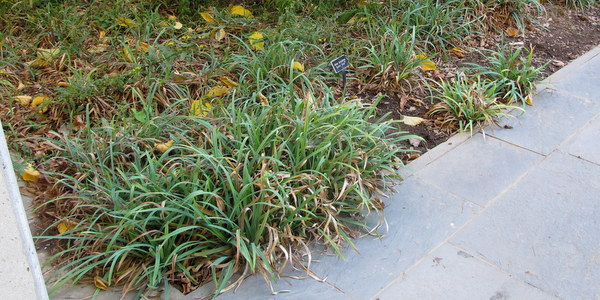 Above, C. laxiculumus ‘Bunny Blue’ also seems sparse.  Chuck wrote that it “also started out pretty well. It started to thin out when I interplanted it with Solidago caesia. Again, I think some of the plants got shaded out. I also heard that some goldenrods are alleopathic so I don’t know if that had anything to do with it.” 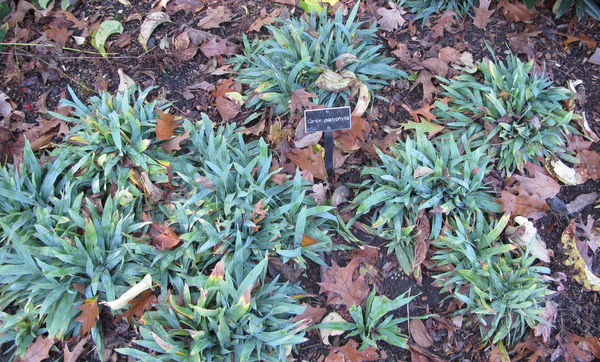 Above, C. platyphylla. “The same thing happened with C.platyphylla. It was doing fine until I interplanted it with Allium cernuum.” 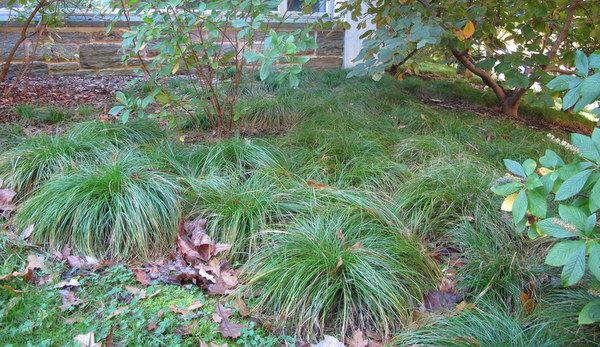 Above, C. albicans.  “Carex albicans has been one of the best performers for doing well in a variety of sites – sun/shade,dry/moist,” says Chuck.

Above, the C. texensis looked pretty sparce to me.  Chuck says it’s “done well in a drier,sunnier spot. The habit looks a little messy – it flops but has a flat look to it. It self-sows as well.”

Overall, Chuck reports that “The growth habits of different species vary greatly. Some of the small clumpers definitely take more time to fill in. C.appalachica,C.eburnea,and C.rosea are slower to fill in. C.sprengellii,C. brevior and C.amphibola filled in very quickly.  C. woodii has done well in part shade. It does not like extended dry periods, though.”

And, “Our infiltration beds using carex have generated some interest. We plan on expanding them.”

Two more of my favorites below. 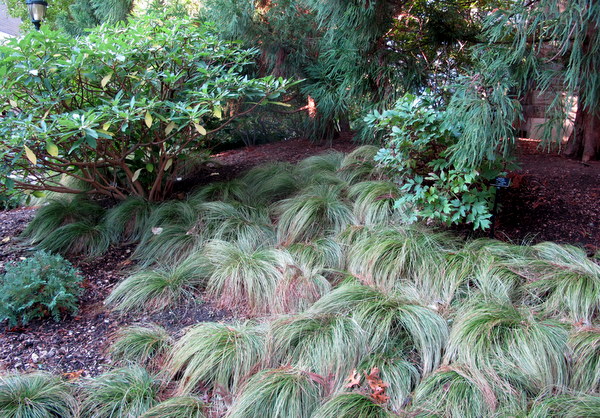 Thanks to Chuck and the Scott Arboretum for their work in trialing and publicizing this important group of plants as lawn alternatives.

UPDATE ON SHADE:  Carexes are a great group of plants to explore for shade situations, so after reading Laura’s comment below I decided to add photos of two of my favorites for full shade.   (Also, in the examples above, C. albicans and leavenworthii look terrific, and they’re in shade.)

SECOND UPDATE ON NATIVES AND SHADE:  “As far as native carexes for shade, I think there are some great woodland sedges. They tolerate part shade or dappled light. I’m not sure how many tolerate (or look great) in full shade. As you saw, C. pensylvanica was growing in shade but was very thin. Most do better in moist shade than dry.” That being said, here are some native woodland sedges I would recommend: C.albicans, C.amphibola, C.eburnea, C.grisea, C.laxiculmis, C.plantaginea, C.radiata, C.sprengelii.  Some other (non-native) garden sedges that do well in shade for us are C.morrowii and C.siderosticha cvs. for moist shade and C.oshimensis cvs. for drier shade.”   Chuck Hinkle 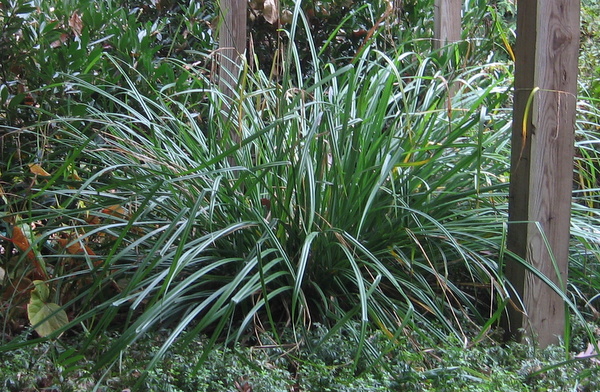 Above, a taller evergreen Carex I’ve grown for 25+ years in full shade and taken many divisions from.  It’s about 3 feet tall.  Don’t know the name but assume it’s Asian. 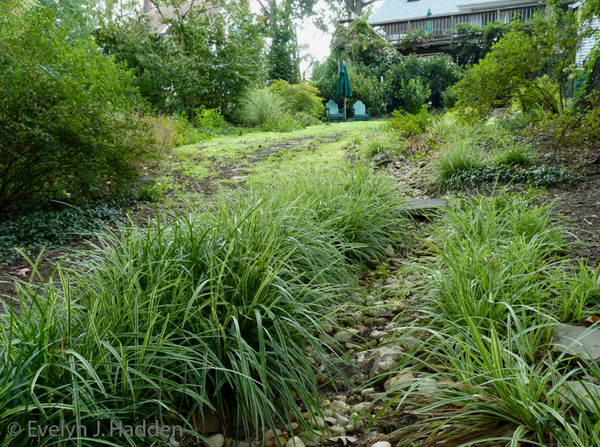 This is C. morrowii ‘Ice Dance,’ which I’ve also grown for decades in full shade OR full sun, and love.  Its variegated foliage brightens up shady spots, and it grows larger to produce divisions without spreading by aggressive runners (true of all Carexes, btw).  The Scott Arb also has good success with ‘Ice Dance,’ Chuck tells me.