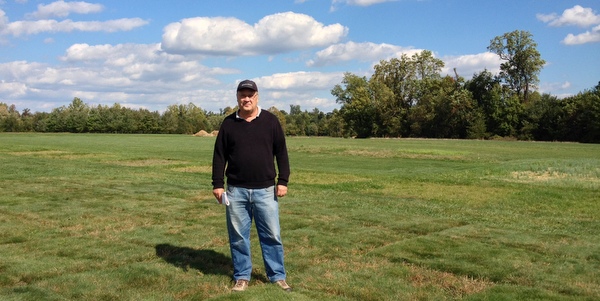 Dr. Thomas Turner standing on some of the 23 varieties of fine fescues he’s testing.

It’s kinda frustrating here in the Mid-Atlantic “Transition Zone” for turfgrasses because neither warm- or cold-season grasses are best suited to our climate.  The frustration was pronounced as I looked for examples of the more sustainable, no-mow-type fine fescues that are being touted from colder climes.  (Here’s a shout-out from grass researcher Tom Christopher in Connecticut.)

So when the University of Maryland asked me to speak to their staff, faculty and volunteers about “no-mow lawn alternatives,” I had lots of lovely photos to show them of lawnless yards and great perennial groundcovers but almost nothing to say about more sustainable turfgrasses proven to do well in Maryland.  The best I could do was to cite findings by the Maryland Turf Council on the subject, which meant I was referring them to their own research. Also, it was a tad technical for this liberal arts major.

But it turned out to be fun brainstorming with the small but alert audience of turfgrass geeks, and best of all, I was offered the chance to survey whole fields of fine fescues being tested right there on the College Park campus.  Microclover, too.  Oh boy.

The top turf expert in Maryland is Dr. Thomas Turner, and he was willing to let us through the tight security (Secret Service, listen up!) to get to the research fields. Tight security came as a surprise to me but sure, if kids can jump the fence and do whatever they want there, the results are unreliable.  Got it.

First Dr. Turner showed us the 23 cultivars of fine fescues he’s been growing since 2008. For these trials there had been no irrigation or weed control and just one pound of Nitrogen added per year.  And the results are – drumroll please – that hard fescue is the best performing, and it looks damn good.  Interestingly, while hard fescues being grown in the U.K. and other climates cooler than Maryland’s can take quite a bit of traffic, even sports (!), here in the Transition Zone, not much foot traffic is tolerated.

Turner says the key to the success of fine fescues, including the best-performing hard type, is to mow in the spring, stop mowing in early June, then start mowing again in mid-September.  In some locations, especially along highways, maintenance crews kept up their usual mowing routine throughout the summer and the turf was ruined. So, switching to an unconventional, slower-growing fescue might require a culture change to take hold.

But grown correctly, hard fescue becomes thick enough that there are almost no weeds, and no disease. Poor soil is just fine, and hard fescue is more shade-tolerant than conventional tall fescues.

Interestingly, the best results were attained using straight varieties, not mixes of several varieties, though golf courses are known to mix in some chewing fescue with the hard fescue, because it grows faster.

Speaking of golf courses, I asked why we’re not seeing these grasses sold commercially and was told that the golf courses are snatching up all the available seed! But hey, that’s good news because if they’re buying the seed it’s not because of some slick Scotts advertising but because the science supports it and Dr. Turner has recommended it.

That’s another example of the golf course industry being in the forefront of products and practices that require fewer resources, which makes sense because these changes help their bottom line.  (In stark contrast to the makers of seed, fertilizer and pesticide and the lawn maintenance industry, all of which stand to lose if lawns become more sustainable.)

I’d  been hearing the buzz about microclovers, the short types being developed for the same self-fertilizing qualities we love in regular Dutch White but a height more similar to fescues.  So, is it the miracle plant so many are hoping for?  Not when combined with fine fescues, it isn’t – it out-competes the fescue to death.  With regular tall fescue it’s fine, though, and it does reduce the need for supplemental Nitrogen.  Microclover negatives include the fact that in heat waves it dies back completely, leaving bare soil all winter, and it’s also susceptible to Southern Blight.

Clover’s inability to handle temperatures in the 90s and higher accounts for the absence of any field of all-clover being trialed here. Bare ground all winter is kind of a deal-breaker.

Dr. Turner showed us one more test – what happens when grass is cut at different heights – and the results were clear as a bell.  When mowed to 1″, turfgrass becomes 80% crabgrass, and that percentage drops severely as the mower height is raised.  The ideal heights in this test were between 3.5 and 4 inches, with mowing heights above 4 inches resulting in increased disease (because the blades of grass stay wet too long).