Poi, a traditional edible starch of the tropics, made from the ground corms of taro, can’t keep up with its popular starchy rivals—potato, corn and rice. But its ornamental qualities have come out of the shadows in the last ten years. The tropical plant, commonly known as elephant ears, has become a go-to, seasonal foliage plant. Brian Williams, a breeder from a surprising temperate taro outpost, along the outer edges of the Bluegrass on North Preston Highway in Louisville, Kentucky, has been working magic. 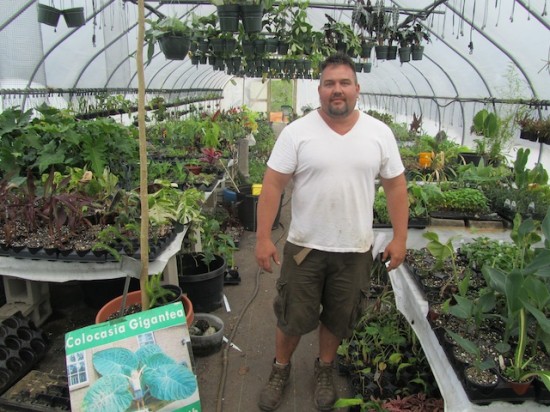 Poi has plenty of enthusiasts. Brian Williams is not one of them. He tasted poi once at an aroid conference at the Fairchild Botanic Gardens in Coral Gables, FL.  “Pasty,” he said matter of factly, though quickly acknowledged it probably could be doctored up to make it taste better. Brian won’t belittle anything to do with taro, Colocasia esculenta, or its other Araceae family kin—Jack-in-the pulpit, Philodendron, skunk cabbage, Caladium and voodoo lily. He loves aroids.

Hawaiian grocery store stockers, last January, seemed puzzled that I’d be interested in poi at all, but they were keen to tell me what to look for. There was no consensus on flavor. Some liked it; others grimaced. 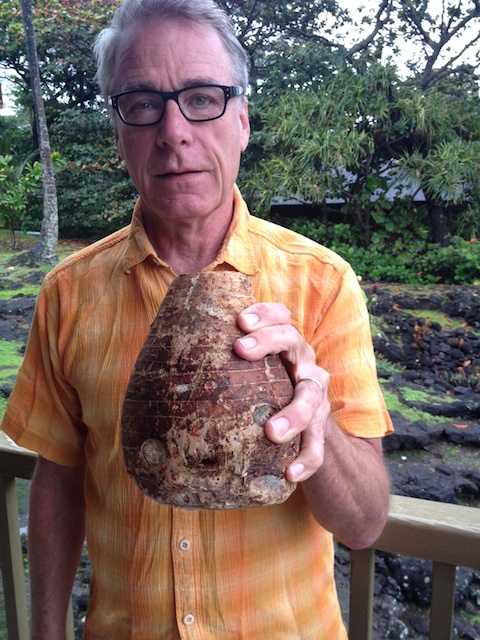 Freshness distinguishes sweet poi from a naturally fermented sour version that progresses the longer it sits on shelves. Poi gourmands can choose sweet or sour. It’s a matter of taste. Take your pick.

Poi was squeezed into 16-ounce plastic bags, sitting forlornly in the produce section of Hasegawa’s Grocery in Hana, Hawaii. The poi had the curbside appeal of a colostomy bag and the viscosity of axle grease. Surely, producers can make a better presentation.

On a taste-o-meter, Poi struggles with the bland reputation that grits once had. When either starch is served unadorned, there’s not much to like. But you can add sizzle to grits with sharp cheddar cheese, pickled ramps (Allium tricoccum) and hot sauce.  Poi needs that kind of help.

McDonalds thinks there is an upside to taro, too. They’re making a run with Taro Pie in Asian and Hawaiian stores, based on a formula resembling their apple turnover— substituting apples with poi. The upshot: if you bake even the dullest foodstuff inside a doughy crust and smother it with enough sugar, you can disguise its flavor. 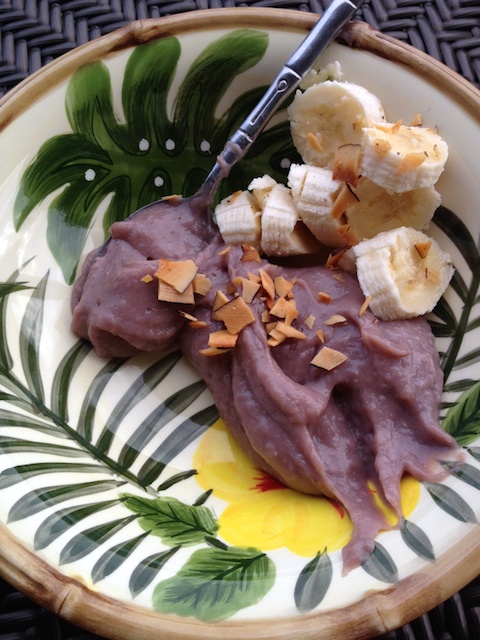 I tried ladling my own bowl full of poi at the sweeter end of the spectrum. I cut-up a banana and sprinkled coconut chips, sweetened with cane sugar. Not quite the breakfast bomber of a Taro Pie, but it was tasty.  Not a likely staple, but I don’t do grits for breakfast every morning, either.

The nursery name, Brian’s Botanicals, is perfectly suited: There’s a guy named Brian who is nuts about plants. Brian Williams crossed the threshold of plant geekdom at a young age. The thirty-six year old grew-up in a nursery family. He started growing carnivorous plants when he was twelve. A few years later, he became interested in turtles; that led to ponds and companion plants. He was selling and swapping rare aroids—Philodendrons and Alocasias (upright elephant ears)—by the time he was twenty. By 2000 he had introduced Colocasias ‘Big Dipper’ and ‘Pink China’.  In addition to nine Colocasia introductions—with more in the pipeline—Brian has recently offered Canna ‘Maui Punch’ PP#23931 and the bizarre-looking Caladium ‘Painted Dart Frog’. 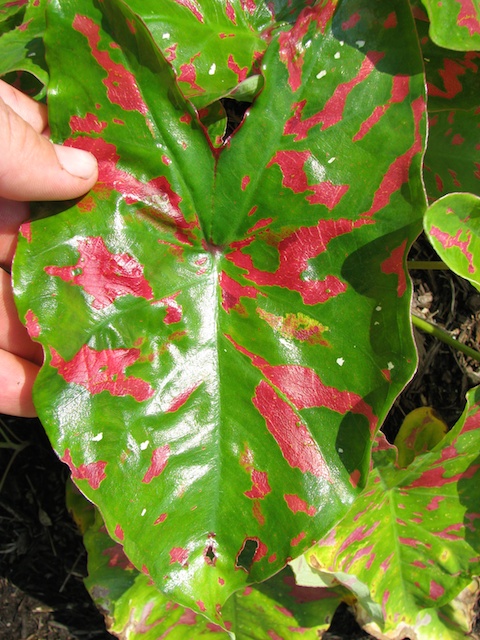 Brian does all of his summer breeding outdoors.  A friend and greenhouse grower sows the current year seeds in January in a sweatbox heated to 85 F. Germination begins uniformly in three to five weeks when he uses the current year’s seed harvest.  Germination is diminished about 10% each year, using older seeds.

Louisville dipped to –5 F this January (our first normal Zone 6b winter in awhile), but Brian’s trial beds of Cannas, Colocasias and Alocasias fared well. Ordinarily, Colocasias are cold-hardy from Zones 7b to 8a (5 to 10 F). The trick to squeezing out a little extra winter hardiness: the right mulch. Brian applies 12 inches of chopped leaves. Hardwood mulch will also work, but pine needles, hay or cypress mulch won’t. Brian applies nitrogen-rich urea (you can buy it from him) in mid-to-late winter. This heats up the leaf pile.  By late spring the plants emerge, and the leaf pile rots down to one inch of compost. 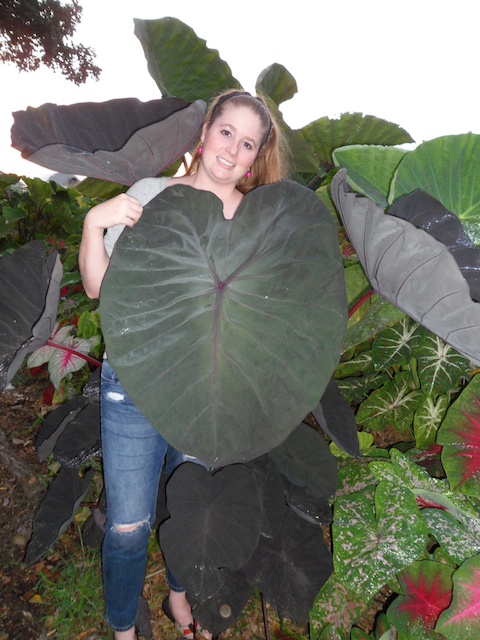 Brian has an impressive collection of rare tropical plants on North Preston Highway, but he has never seen any tropical aroids in the wild. He has been invited to go to Malaysia this year and is excited about the prospect of seeing new species in native habitats.