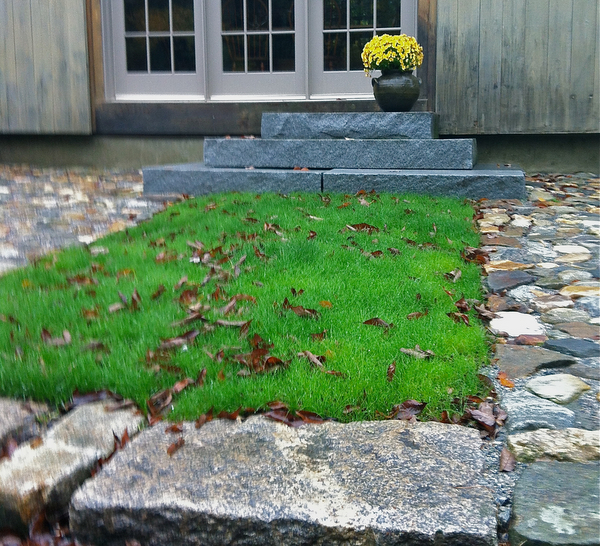 Enhancing biodiversity is fundamental to transforming lawns from the polluted green deserts that they now are into the sustainable, environmentally constructive landscape features we desire.  For that reason, in my plantings I’ve avoided becoming too reliant on any one grass.  Instead, I try to include many different grasses (and increasingly, wildflowers) in my seed mixes – I combine not only different species of grasses, but also several different cultivars of any given species.   But if I were to nominate a favorite turf grass, it would probably be sheep fescue (Festuca ovina).

This overlooked species has traditionally been regarded, in the East at least, as useful only for soil erosion control on difficult and inaccessible sites.  It’s what highway departments plant on a steeply sloping highway shoulders that are difficult to mow – sheep fescue is so slow growing it requires only one or two cuttings a year and if left uncut forms a low, meadow-like carpet.  And sheep fescue is tough.  It flourishes on poor soils.  In fact, fertilizing sheep fescue is usually a mistake since the extra nutrients will benefit weeds more than they will benefit the grass.  Sheep fescue also thrives on acidic soils, something that few other turf grasses can do, and once established, it’s almost invulnerable to drought, at least in the Northeastern climate.

Traditional turf managers, whose standard of beauty was the plush, emerald green of force-fed Kentucky bluegrass, dismiss sheep fescue as homely, but I like the soft texture created by its long, thin leaf-blades, and its delicate bluish-gray color.  And if I want a richer look, I can resort to one of the two commercially available cultivars:  ‘Azay’, which is a darker green than the species type, and ‘Azay Blue’, which offers an attractive blue-green.

Actually, genetic testing has suggested that these two cultivars may be types of hard fescue (Festuca longifolia) rather than sheep fescues, but for me the important point is that they look and behave like sheep fescue.  In addition to their self-sufficient hardiness, ‘Azay’ and ‘Azay Blue’ are both bunch grasses: they do not spread by stolons to form a solid web like a bluegrass but instead grow in tufts that expand outwards to eventually merge into a single carpet.  Bunch grasses are much better at sharing their territory with other low-growing plants, which makes them good partners for the perennial wildflowers I want to incorporate into the lawns I plant.

Late last summer I created a turf path to bisect the cobbled courtyard I created in front of our house in the Berkshire Hills of southwestern Massachusetts.   For aesthetic reasons I wanted this small strip of greenery to have a uniform height and color, so I planted it solely with ‘Azay Blue’.  The effect of this soft turf juxtaposed with the rugged glacial cobbles (I’d collected and set these myself) was as dramatic as I had hoped.  I planted the grass in late August, and by late September when I began punching holes in it to plant bulbs, I found the ‘Azay Blue’ had already sent its roots down five inches.

Early next spring the grass will be scattered with blue flowers of species crocuses and chionodoxas.  I’m starting bluets (Houstonia caerulea) and violet wood sorrel (Oxalis violacea) from seed this winter to provide follow-up color.  If the wood sorrel takes, this will significantly enhance the total population of its species in Massachusetts.   This native wildflower, which requires good sunlight, has been disappearing from Massachusetts as the second growth forest grows denser, so that now only five limited colonies survive.  I’m hoping to add a sixth.

I’ve identified two other sheep fescue cultivars, a European type called ‘Quattro’, and another identified only as ‘MX-86’ which is especially low-growing and is inoculated with endophytic fungi, so it should prove especially insect and disease resistant.  I’m going to try both this coming spring and I would love to hear reports from anyone who has experience with either one.

You won’t find seed of any of these grasses at your local garden center, but all are available at competitive prices by mail order.