To Stop Bee-Killing Pesticides, Start with the Box Stores! 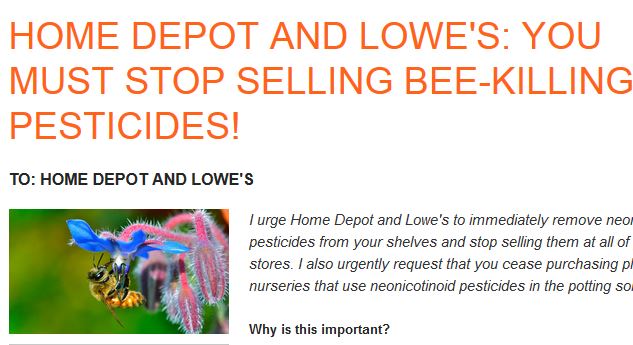 The first alarm about bee-killing pesticides that caught my eye warned of plants that had been sprayed with neonicotinoids doing the killing.  Then petitions like this one got my attention and I hoped it meant that only the big boxes stores were at fault here, selling horrible products.  But then I read some more and realized it’s not just two unfeeling companies involved here.  These bee-killing pesticides (neonics for short) are sold everywhere.  You know, on the shelves of garden departments and garden centers everywhere – products from companies like Ortho and Bayer. Scroll down here for the list of products.

Worse, the deadliness of neonics to bees is being claimed not by some fringe greenies but by such establishment authorities as the USDA.  There’s really no argument about the problem here. 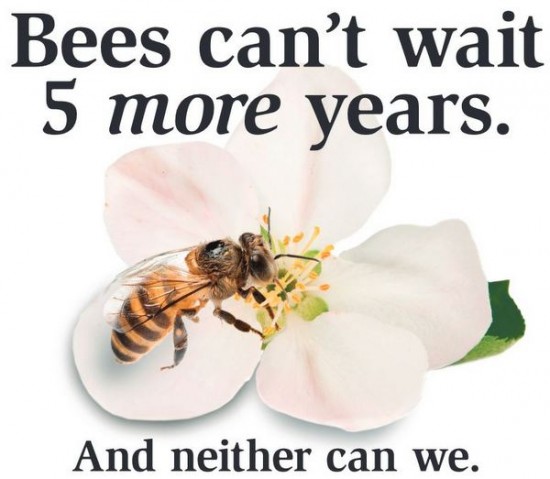 No surprise then that the campaign against neonics has gained a lot of momentum and big bucks are being spent to get the message out – like for this full-page ad in the New York Times. The ad announces that “This week, 15 countries are imposing a two-year restriction on the use of several of these chemicals. Meanwhile, the United States is stalling. The U.S. Environmental Protection Agency estimates it will be 2018, 5 years from now, before it makes a decision on this deadly class of pesticide.”

So far, all the EPA has done is to develop an advisory warning consumers not to use these pesticides “where bees are present.”  HUH?

The Impact on Retailers

So, what would be the impact, both horticulturally and financially, of banning these bee-killing pesticides, anyway?  I turned to people in the independent garden center world for their thoughts on the matter, since like the big boxes, they stand to be hurt financially, and I actually WANT them to make a profit and continue to feed my plant-buying habit.

Here’s how important these pesticides are to them: They sell lots of those blue and green bottles, especially the bizarrely named “Rose and Flower Care” – sounds harmless, doesn’t it?  And almost all growers, I’m told, use these pesticides. Here’s why, via email from a perennial buyer.

Virtually all ornamental plants we sell are treated with them at one time or another. That’s why they are the most popular pesticides on the planet: They work. They have low mammalian toxicity. They came on the market at the same time that many of the other long-term pesticides were coming off due to environmental and health concerns. They replaced diazinon in grub treatment for example.

He went on to predict that the since “the EPA has banned just about everything over the years, I have no reason to think that they won’t act properly on this issue.”

And what are the alternatives to neonics?  Not a lot:  hort oils, pepper spray, Neem and pyrethrins, to which there is wide resistance.

Even without EPA action, retailers with a conscience could just stop selling neonics, right?  Just like the good ones refused to sell Impatiens this season (due to downy mildew) – and took a huge hit because customers got right back in their cars and drove to Home Depot to get their sickly annuals.  No doubt that would happen again if small retailers took these super-effective pesticides off their shelves.

And what if the small retailers tell their growers to stop using neonics?  One wrote to tell me that:

We’ve contacted most of the growers we buy from to ask about their spray programs and to find out whether they are aware of recent reports about neonics, or how widely publicized they are. I spoke to one grower who said they would quit using neonics (which they use sparingly, in rotation with other controls) immediately if they thought that we, the garden centers, and our customers would buy plants with “pests” and occasional, visible insect damage. I hope to see a lot of education from the garden media, and anyone who has the eyes and ears of the public about the fact that we will have to adjust our notions about all insects being pests. We need to accept that if we want to save the bees and butterflies, we’re going to have to live with some aphids too.

There are several growers who were proud to say they didn’t treat with neonics, so I’d like to see some education among the growers, who will have to implement new methods to address all of our concerns. I have great respect for the people who are growing our plants, and I hope the public understands they are farmers, with much at stake on their crops and methods.

Another retailer agreed that “Growers will do what their customers want them to do. Do we think the main players in the horticultural world, which is the mass merchants and their suppliers are willing to do this? Not yet.”

One garden center owner suggests better labeling and education about the proper use of neonics:

The use of neonicotinoids on plants that are visited by pollinators is inappropriate, and nursery professionals should advise their customers of that — regardless of what the product label might say. If we want to retain these products for appropriate uses, we will need to stop using them in ways that harm beneficial insects. They have become among the most widely used pesticides in agriculture and horticulture, and in many cases they are unnecessary and clearly have unintended, undesirable consequences. We as an industry need to support reasonable re-regulation and re-labeling of neonicotinoids and discourage their inappropriate use by our customers.

From what I read, the EPA absolutely should act faster to ban neonicotinoids because the science is clear.  But until they do, we should put pressure on the huge retailers with oversized clout to stop selling these products now, and tell their growers to stop using them, too.  Then the local garden centers can follow without digging their own graves.  That’s my take, anyway.  Yours?

Sources, and for more reading: Chemistry World, Mother Jones, the Center for Food Safety,  and Minnesota Public Radio’s report that plants for bee habitat may be killing bees.