There is the young boy, barefoot in the garden, gamely holding a long hoe, even if it is much too big for him. Who could have imagined? Did a young George Bush enjoy the garden? He never mentioned a word to me.

This is a photo of my grandfather, George Bush, Sr. 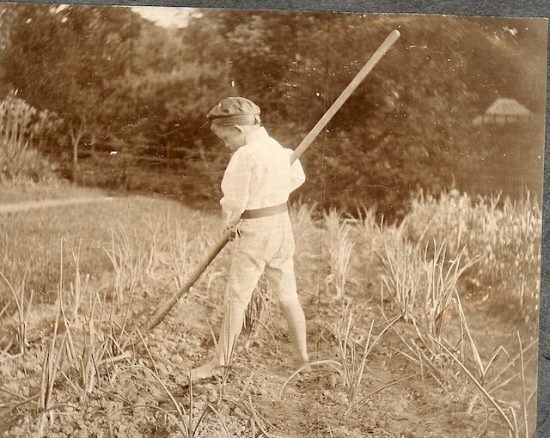 When the elder Bush was president, I was often asked if I was related to George Bush. I impishly answered, “He’s my father!”

A maître d’ in Angers, France, took me at my word, in 1993, when I was introduced by Klaus Jelitto, as the son of George Bush.  Klaus and I had visited Luc André Lepage’s perennial nursery earlier in the afternoon, with our traveling buddies, the Ratzeputz Gang.*

The maître d’, dressed in a tuxedo and a black bow tie, was surprised and delighted to have a Bush in the house. He graciously asked me to sign the restaurant’s register. “I would be honored,” I said. (I wondered later if Georges Pompidou, François Mitterrand or Simone de Beauvoir might also have signed the distinguished guest list?)  The kitchen staff poked their heads out to take a look at me. There was a stir. Patrons glanced my way. I waved and smiled back.

I’ll never know if the maître d’ ever bothered to search for the name: Allen, to go along with brothers—George, Jeb, Neil and Marvin? If he had, he would have found that I was a poseur. I am a no relation to the White House Bushes.

My father, George A. Bush, Jr., never enjoyed the joke. Dad had his name taken out of the Louisville phone book after one too many late night prank calls. It must have been frustrating for local bar patrons, to figure out how to reach the White House switchboard after drinking a snoot full. But there was a local option that could be found in the white pages, hanging on a chain from the payphone. “Yep, there he is—George Bush.”  Ring, Ring, Ring… “Is this the President?” 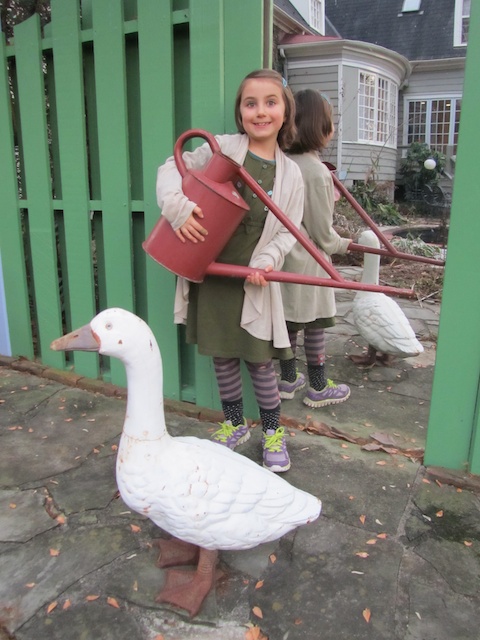 Stefanie and Tony Buzan, who’ve restored the Bush family home place on Kenwood Hill, unearthed the photograph of my grandfather that dates to around 1896. It was a huge cultural deposit.  Little George, maybe seven or eight years old, is standing in the middle of a weed-free patch of onions, dressed in knickers and a natty cap.

Besides my dentist, who often talked about his tomatoes while polishing my teeth, I can’t think of another male, during my childhood, who held a hoe. My mother had a garden; the men went fishing, hunting or golfing, and then went drinking.

The photo represented genetic and barefoot proof that a direct male ancestor—not related to the President—cultivated a garden.

My grandfather lived and gardened, however briefly, on Kenwood Hill, not far from the adjacent knob that is the Frederick Law Olmsted-designed Iroquois Park on the south side of town. I live and garden across town on the east end, just down the street from Cherokee Park, another Olmsted Park.

These are strong roots: my grandfather, our two Louisville gardens and the beautiful Olmsted Parks. I wonder what George Bush, Sr. would think today of his 6 ½ year-old great-great granddaughter, a park lover and young gardener, who at the precocious age of 4, said to me, “Babu, let’s go sow some seeds.”

*The Ratzeputz Gang began as loose-knit group that included nurserymen, a seedsman and an educator who assembled for a tour of German gardens, parks and nurseries in 1987. One night, near the end of the trip, after dinner, we met in the rathskeller of the Heide-Kröpke Hotel near Celle, Germany for a nightcap. Once we’d settled-in, a German bar patron bought us all a round of the local ginger-based schnapps called Ratzeputz, that loosely translates to: “total annihilation.” The initiation with this vile-tasting local drink sealed the deal and the plantsmen became fast friends.  We anointed ourselves as the Ratzeputz Gang. Our curiosity for plants and gardens has taken us, in the years since, to Germany, Holland, Denmark, Sweden, France, Italy, England, Argentina, Russia, Estonia, Czech Republic and a little closer to home—Colorado.