Tale of My Two Gardens 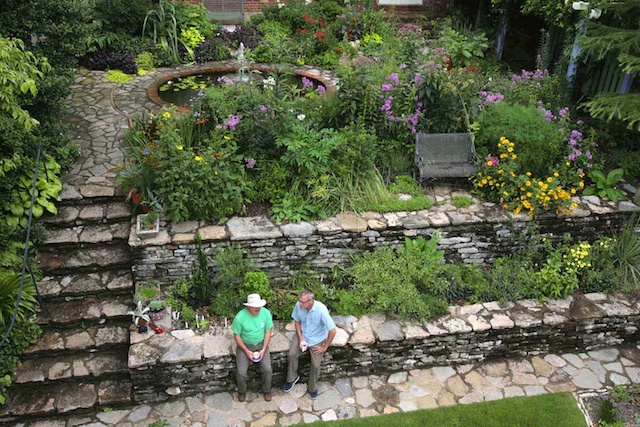 I have two gardens and can barely keep up with one.

The first garden is in Louisville, where Rose and I have lived for 18 years. It’s on a one-third acre city lot, down the street from the Olmsted-designed Cherokee Park. It’s planted with perennials, trees, shrubs, and a few annuals and features a scree garden with cacti, alpine and rock plants. Rose and I do almost all of the work. Together we maintain a His and Hers garden concord. She does the front garden; I do the back. Rose is into style; I’m into a collection of oddball ornamental plants.

The second garden is in the outer Bluegrass, near Salvisa, Kentucky, a one-hour drive from Louisville.  The new garden has less than 750 square feet of planted area, a manageable allotment for our dotage. This includes a small herbaceous border and a rock garden.

Both city and country gardens take work. A lot of work.

I am 62 years old and was diagnosed with M.S. seven years ago. Fortunately, I’m not hobbled badly (I walk with a hitch) and am still bubbling with enthusiasm. But my dopamines aren’t what they once were. (Dopamine is a neurotransmitter that gives you get-up-and-go.) While they recede—a normal function of aging— once-burning ambitions simmer down.  (Source.)

It took years to light the fire in the first place. The wild fire burned out of control for a while, but now I’m happy it’s still smoldering.

I’ve been asking myself for months whether I’m up for two gardens. I told Rose that I was ready to sell the city place, to simplify and focus on the country.  She’s not ready. We raised our kids in Louisville and started a garden together.

Our Louisville garden is a jumble of plants from years gone by. Walter Benjamin, in an essay called “Unpacking My Library,” described the push-pull of his book collection. He wondered: what stays; what goes? I’m wondering about my Louisville plants, after re-reading Benjamin’s essay. He said, “Every passion borders on the chaotic, but the collector’s passion borders on the chaos of memories.”

I have started a list of plants that I can’t be without. There’s not a high-ticket plant in the bunch. My garden is full of memories of their provenance.

Dick Bir brought me the hardy apricot colored Gladiolus dalenii ‘Boone’ over 20 years ago. If I left ‘Boone’ behind what would become of Dick? Elizabeth Lawrence gave me Kalimeris pinnatifda ‘Hortensis’ in 1982. She called it Asteromoea mongolica. Though that name got tossed on the taxonomic trash heap, the durable perennial remains one of the finest white blooming daisies. I grew some seeds of a hardy palm, Sabal minor, that originally came from McCurtain County, Oklahoma, via Tony Avent, just five or six years ago. I don’t want to lose that. And I have a few bulbs of the white-flowering native Hymenocallis caroliniana, the Carolina spider lily. Nancy Fleisher sent seeds in 2008 that she wild-collected in Hickman County, Tennessee. They took three years to bloom, but it was worth the wait.

Their introduction to our country place was a tease. The little farm was not for sale. But Rose and I loved the place on a bend of the Salt River. There was a hint that it might come-up for sale one day. It came-up for sale two years later, and I soon started thinking about a new garden.

Mac and Tay designed the bones of our new garden last winter.  Charles Dewar and James Reid, Mac’s son, crafted much of the rockwork over the winter and spring. I loved the design and felt at home in the space, but was gun shy about how to move forward with planting.

Then in May, Mac asked if we’d open the country garden for a tour.

I spent hours staring at the new garden, thinking about what to do. I dithered all spring.  I shrugged and told Mac, “There are no plants.”

The tour of 12 or 15 came out to the country on a Saturday afternoon in late June.

I planted the garden the night before.

The planting was a hurried attempt at blending a Victorian bedding scheme with the look of an alpine cascade right out of  “The Sound of Music.”

I packed the border with annuals: guaranteed gobs of summer blooms.  There were white and purple bi-colored angelonias, creeping red verbenas, black blooming petunias and white flowering lantanas. Orange cosmos, yellow sunflowers, ‘New Zealand Purple’ castor beans, coleus and a couple of white blooming moonflowers were in the mix, too.

I had hoped the gravel scree with the centerpiece of “elemental” rock might look like an Austrian alpine mountainside, just out of the box.  That would have to wait.  A screaming yellow portulaca and the purple foliage of Tradescantia pallida ‘Purpurea’, planted in desperation, would command attention a few weeks later and throughout the summer.

In the light of day, my fantasy, looked like the garden of an Arizona motor court along Route 66. Little starter plants, a lot of rocks and a pile of gravel. No Victorian swagger; no singing von Trapps.

I realize, now, three months later, that I am not suited for the static monotony of carpets of annual color, week after week. Masses of annuals can be a pleasure for a day or two. So can a couple of piña coladas, but not every single day.

The precious perennials and rock garden plants that I love, with their subtle nuances, rich textures and a parade of changing bloom week after week, will have their chance and their challenges next year.

I explained apologetically to the tour visitors that our garden was only 18 hours old. Mac covered for me. The skillful landscape architect explained the process: “The garden is in transition.”