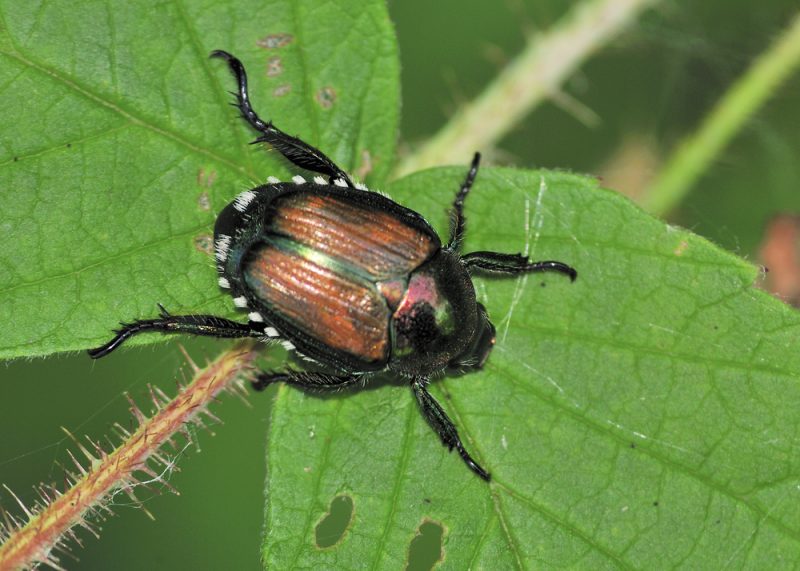 To trap or not to trap? That is the million roses question, isn’t it?  Conventional wisdom holds that the use of Japanese beetle-specific traps will increase beetle damage on plants adjacent to the trap sites. You can find that “wisdom” repeated everywhere—on extension articles, Internet blogs, over and over, accepted and final.

Well, friends, ProfessorRoush had a mentor who once said to me “If I wrote that the sky is green in a book chapter of an authoritative text, in 10 years the entire world would be repeating that the sky is green.”  Phrases like “conventional wisdom” just raise my hackles, because if we’ve learned anything from the past millennium, it’s that if we followed “conventional wisdom,” we would still believe the sun revolved around the earth, the New World would never have been discovered by Europeans, and I wouldn’t be trying to garden in the hell-hole of Kansas.

In the throes of anguish after Japanese beetles finally reached Manhattan, Kansas, I set out to look at some of the actual research behind the no-trap recommendation, and I can already tell you that the question is far from settled. Most of the statements that Japanese beetle-specific traps increase plant damage and don’t affect beetle numbers are referenced back to two papers in the Journal of Economic Entomology, 1985 and 1986, authored by F. Carter Gorden and Daniel A. Potter from the University of Kentucky. The papers indeed reach the referenced conclusions, but if you examine the materials and methods of their research you’ll discover the interesting fact that they placed their traps at 1.2 meters above the ground in both studies. I already knew that a more recent study, by Alm in 1996, found that a height of 13 cm above the ground was the most efficient trap height, which just happens to also be the average height that Japanese beetles fly around a garden. The 1985 and 1986 papers, for those metrically-disadvantaged, had their traps at 120 cm, so, in essence, they were expecting these lumbering insectoid rocks to find the traps approximately 10 times farther off the ground than they normally fly. Thus science advances gardening.

I also reviewed a 1998 Journal of Arboriculture paper by Wawrzynski and Ascerno that found that mass trapping over 15 acre area caused a 97% reduction in Japanese beetles within 4 years. Consequently, I really wonder if gardeners haven’t been kept from using the best tools for this particular job. Commercial traps that use both floral attractants and pheromone lures are demonstrably effective—a popular “bag-a-bug” trap performed pretty well in a 2003 report by Alm and Dawson

What does that mean for ProfessorRoush’s garden?  It means that I’m going to buck the conventional wisdom and trap the bodacious beetles out of my garden for a couple of years to see if I can slow down the invasion. Based on the research available, I will place my traps as close as possible to the recommended 13 cm height and I will place them at least 30 feet away from the nearest important plant so as not to attract beetles right onto my roses. I will empty the traps regularly so the dead beetle stench doesn’t drive others away and I will make sure the lures stay attached. I’ll let you know how it goes.