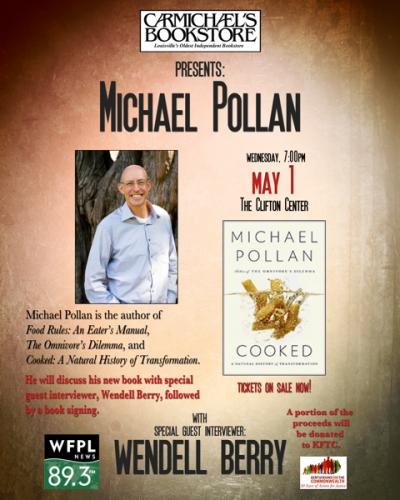 Michael Pollan and Wendell Berry were in Louisville during the first week of May. They weren’t on the Derby celebrity runway that rainy day at Churchill Downs. That was left to Kid Rock, Smokey Robinson—among the few names I did know—plus dozens more B-list television, music and sports “stars” who caused a stir but left me wondering, “Who’s that?”

A completely different kind of audience warmly greeted Pollan and Berry a few days earlier at the sold-out Clifton Center event, sponsored by Carmichael’s Bookstore. Pollan, author and food activist from Berkeley, CA, was interviewed by poet, essayist, novelist and farmer Wendell Berry, who drove to town from nearby Henry County.

Pollan’s latest book, Cooked, had just been published, and he was here to meet his increasingly appreciative readership.

There wasn’t any mention of racehorses. The conversation between teacher and student was described as an “arc” that begins on the farm and garden and ends up when families and friends make time to sit down to eat an unhurried meal—all the better when the meal can be made with unprocessed food.

Berry in his opening remarks said, “This is about discovery or a book of revelation. That’s very much the kind of book this is. Robert Frost wanted his readers to think what a hell of a good time he had writing it. And your book very much communicates that. What a hell of a good time you had writing it.” Further on, he added, “It’s an adventure book, a participatory book. There’s lots of humor.”

“Thanks for your book review,” Pollan responded. “It’s the nicest one I’ve gotten and I really do appreciate it…The reason this book is dedicated to you is because you’ve connected the dots between very ordinary things—the plate in front of us and the farm and garden systems, both natural and economic, that organize our lives. “

Berry has been talking and writing about a broken-down food culture since his groundbreaking The Unsettling of America was published in 1977.  He warned then, “My point is that food is a cultural product; it cannot be produced by technology alone.” Not much has changed, except the amount of processed food has reached staggering proportions, beyond what Berry himself was likely able to imagine all those decades ago.

Berry, however, is delighted that Pollan had picked-up the torch: “There are a number of things in your book that remind me just how essential this connection between culture and nature is; and, therefore how essential cooking is.”  But processed food has become a huge American ball and chain. 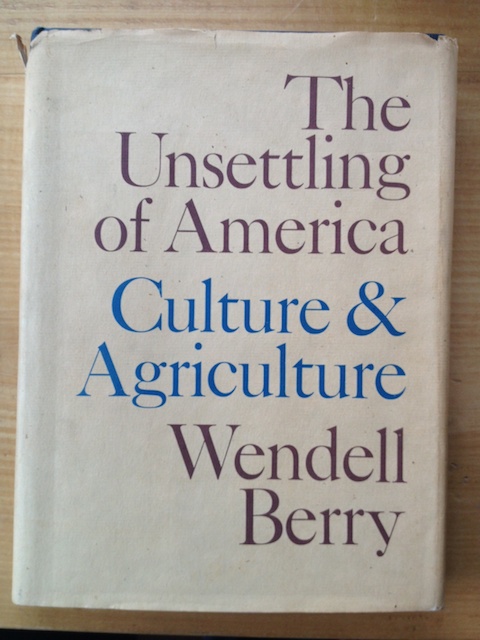 Pollan mentioned Bill Balzer, an industrial food consultant who described American consumers as “cheap and lazy.” Pollan said, “Cooking has been declining since the mid-60s and has fallen by half.  Americans, on average, spend 27 minutes preparing meals each day and four minutes cleaning up. That kind of cleaning is not the kind your grandmother did.  In four minutes I can crumple a pizza box and maybe scrape a few plates.”

And yet Balzer had a remedy. ”Eat anything you want as long as you cook it yourself.”  Pollan, the realist, chewed on that at the time and thought, “There’s a lot of wisdom in that… You won’t eat French fries but once a month, but if you let the corporations cook for you, you’ll eat them twice a day.”

“It’s a very interesting, readable book,” Berry said. “I took a lot of pleasure and instruction. And I don’t have the least intention of learning to cook.” Pollan and the audience laughed.

At our house, on Derby Day, we took Pollan’s advice to heart, but then we had been doing that for years before he became a name to reckon with.

Derby weekend is over the top in every way—from big hats and bad bets, blamed on too much Bourbon. Partygoers at our house didn’t make it until midnight. Once upon a time, in younger days, we might have lingered into the early morning. But this Derby evening, as always, there were friends among us (including Big Daddy and Big Baby), and we filled plates with country ham, added thin slices of beef tenderloin onto fluffy rolls lathered in Henry Bain sauce, and then piled on corn pudding. Then this small heaping was slid together to make room for a few asparagus spears and some mixed greens. Once the plate was licked clean, there was a wedge of Derby pie waiting. No one pushed away from the table. It definitely took longer than four minutes to clean up!