David Culp in his Garden, with Friends and Animals

Not long ago I confessed that I was scheming to see David Culp’s Pennsylvania garden, made glorious in his book The Layered Garden.  And yesterday that blogger pushiness paid off when I attended his book (re)launch in the very same garden, which did not disappoint.

David’s makes his living as a plantsman, especially in the world of perennials, but he also designs gardens for folks.  To me that explains the presence of so many nonplant elements in his garden – he knows that a plants-only garden misses the boat.  And his garden is missing nothing. 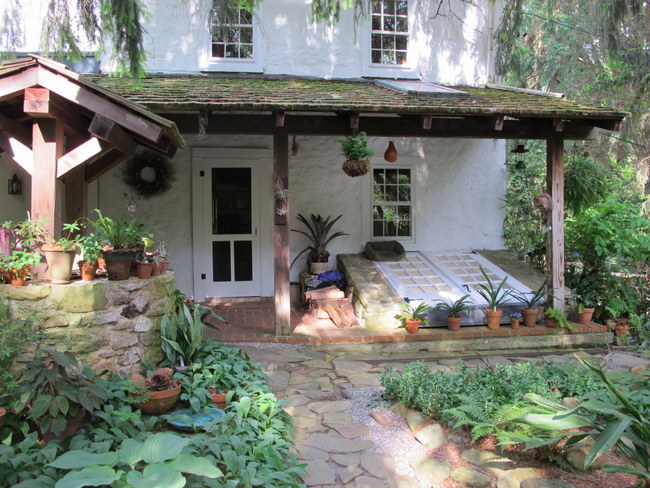 As David told his guests, a garden’s primary feature is the house it surrounds.  His was built in 1790.  Here’s the front door, with the well on the left. 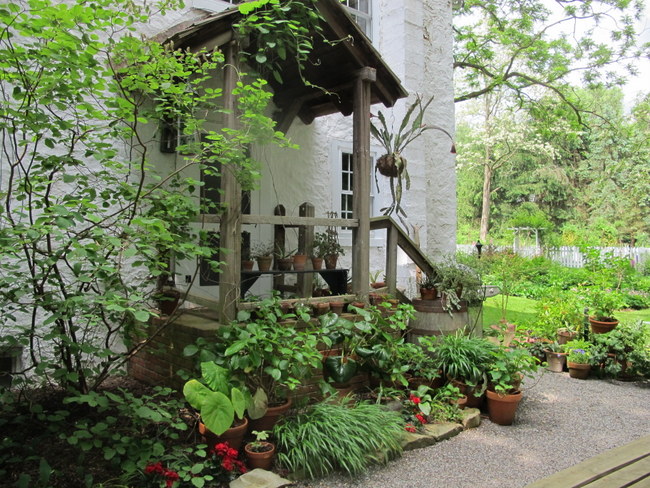 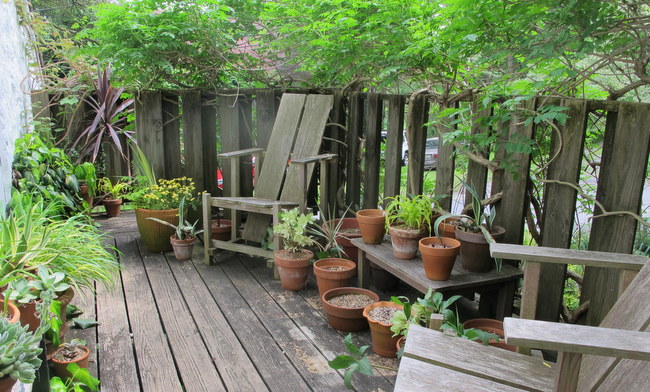 Seating made of old (or at least old-looking) wood is everywhere. 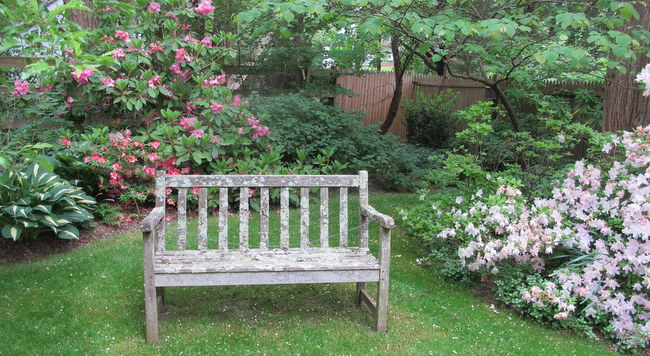 David protected this lichen-covered old bench from actual butts sitting on it, telling us it’s the garden’s oldest seating and that if Chanticleer ran rope off a bench, so can he. 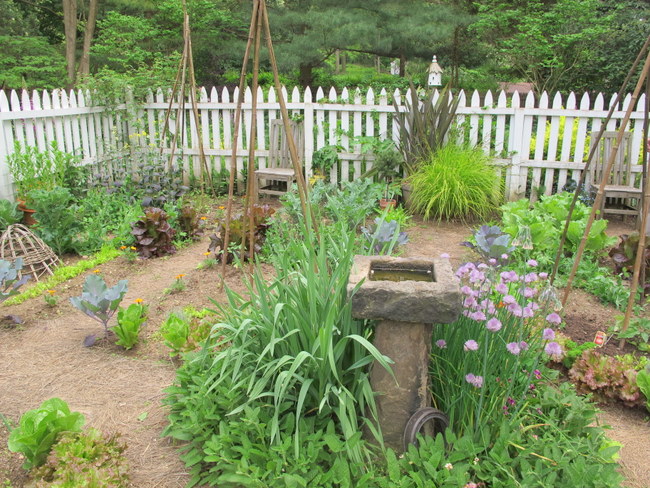 Above, the vegetable garden has more seating, and interesting stuff. 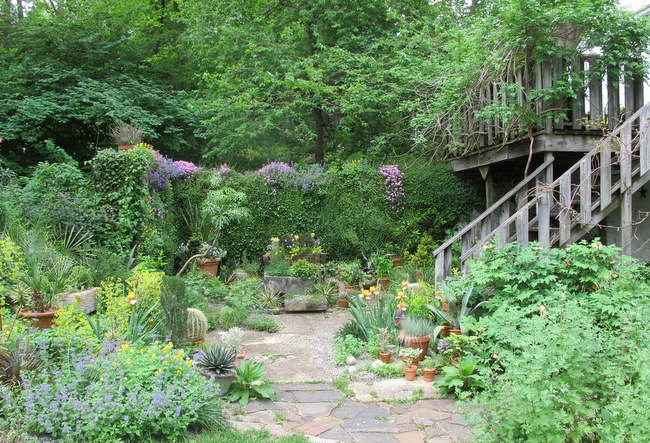 Here the amenities are an old stone wall (now covered with plants) and concrete troughs.  This is the “ruin garden” shown off with much better photos in the book.  (Speaking of the photos, I asked Rob how many times he’d come to the garden to photograph it for the book.  He said the original plan was to include four trips but somehow that turned into 32.  Fortunately, he lives just an hour away.)

Fire features, now hyped as the new big thing in gardens, don’t have to cost a fortune. 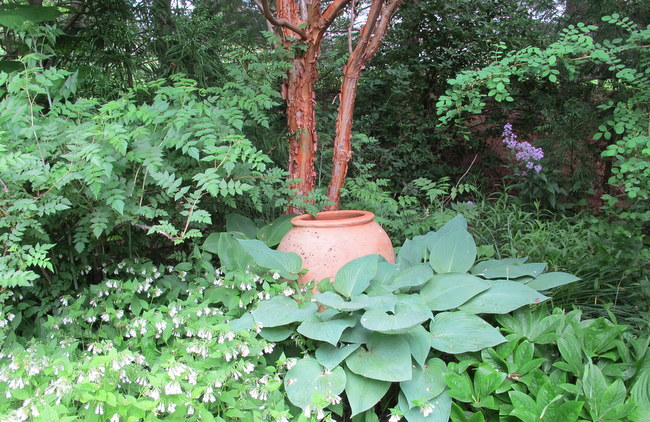 Just a simple empty pot makes the plants around stand out.  Love that exfoliating bark! 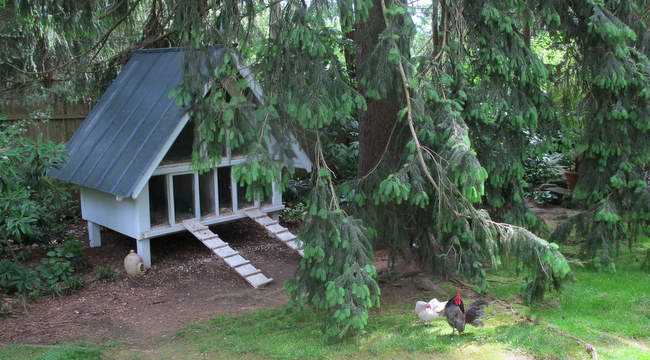 Domesticated animals here include dwarf Bantam chickens, the dwarfness of which is best illustrated below. 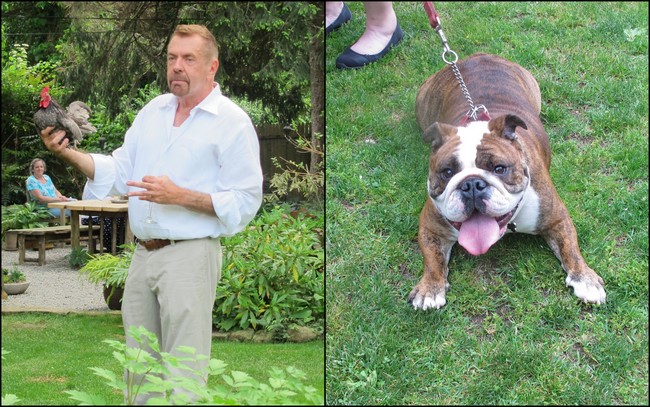 David and Mike have two bulldogs, at least one cat (that I noticed) and at least one canary.   The garden would also have regular deer visitors if they didn’t spray the perimeter of the two-acre garden every week during the season and monthly in the winter. 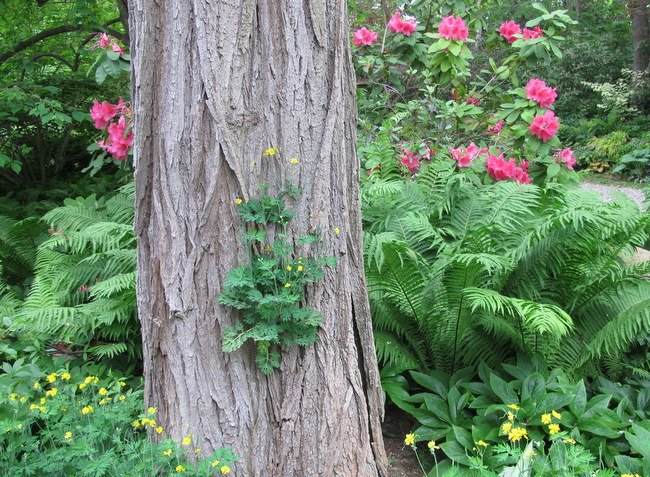 I have just one question about the plants in the garden:  How the hell do you get a Corydalis to grow on the side of a tree?